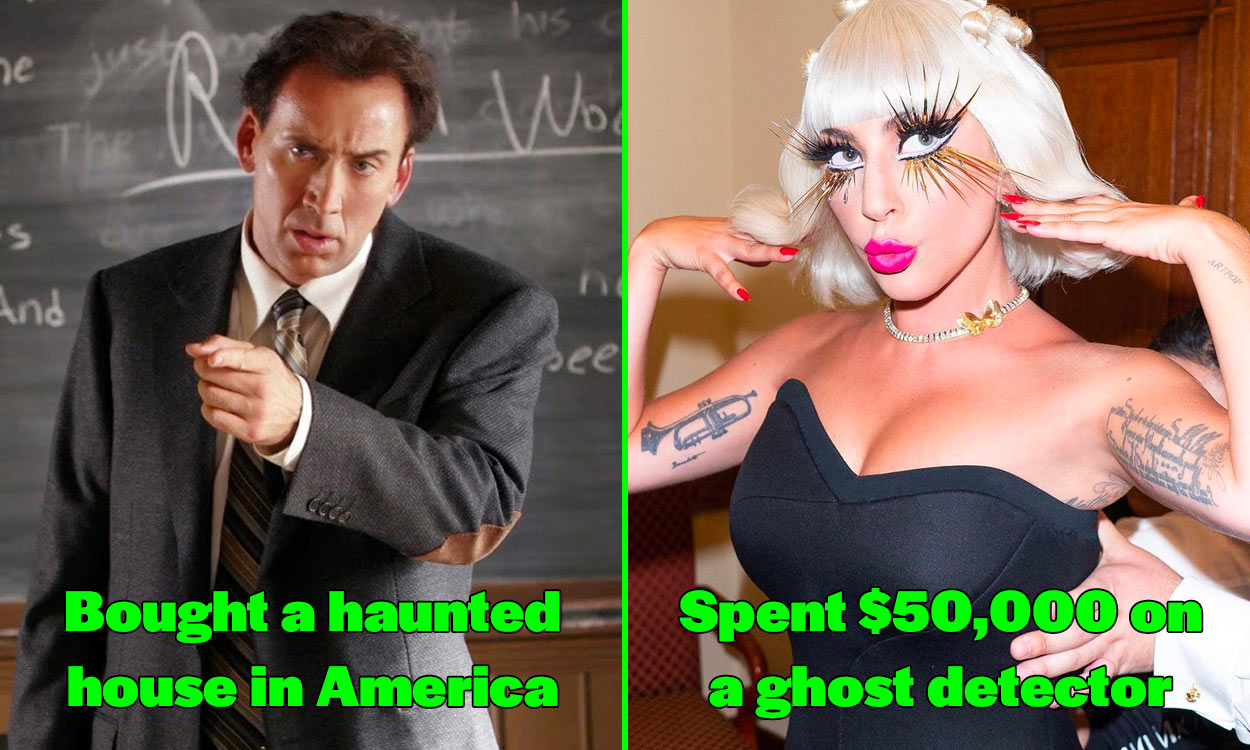 Let’s face it, the urge to buy the most unhinged things on the internet as soon as you earn a paycheck has become second nature to us humans. Be it lightsaber chopsticks, bacon strip bandages or even a Nicolas Cage sequin pillowcase, we’ve all stumbled across wild things we’ve always wished to own in our lives. While some of these make it to your doorstep, others remain abandoned in your cart following a quick reality check.

But this is not the case for some celebrities. Sure, life in the spotlight can come with boatloads of cash and it’s ultimately up to them how they want to spend their riches. But at times, public figures can make some really questionable financial choices.

From custom Batmobiles to haunted houses, here are ten of the most ridiculous things celebrities have blown their fortunes on.

1. Celine Dion spent $2 million on a humidifier to protect her vocal chords

If an average humidifier retails for $20 on Amazon, Celine Dion’s costs a whopping $2 million. During a three-year residency at Caesars Palace in Las Vegas starting in 2002, Dion had the hotel install the expensive humidifier to “preserve her singing voice in the harsh desert climate.” The misting device hung above the stage during all of her performances.

The ‘My Heart Will Go On’ singer is also well-known for her extravagance—once rounding a $4 million per year team that included an Olympic trainer, a yoga teacher and four bodyguards. Did I mention that this was way back in 1999?

2. Tyrese Gibson bought a private island for his eight-year-old daughter

In an interview with ET back in 2015, Fast and Furious star Tyrese Gibson revealed that he had bought his eight-year-old daughter, Shayla, her very own island for Christmas. “Can’t say [where]. She knows all about it and the island is called ‘Love Island’. I’ll be putting it up on my Facebook soon,” he said at the time. Santa could never!

3. Nicolas Cage once bought the most haunted house in America

Over the years, Nicholas Cage has made some creative financial decisions: invited alligators into his bed, ordered venomous snakes to (ironically) calm him down and even collected stolen Mongolian dinosaur skulls by beating Leonardo DiCaprio in a bidding war.

In an interview with the Daily Mail back in 2014, however, the Ghost Rider actor revealed one of the most outlandish purchases ever recorded. “I once lived in the most haunted house in America,” he said. “The LaLaurie Mansion in New Orleans used to belong to Madame LaLaurie, a well known 19th century socialite and serial killer. I bought it in 2007, figuring it would be a good place in which to write the great American horror novel. I didn’t get too far with the novel.” Who would’ve thought?

In 2003, U2 frontman and mega-star Bono realised he had forgotten his trilby hat at home shortly before going on stage at Luciano Pavarotti’s charity concert in Italy. Instead of performing without it, he arranged to have the hat delivered before his show—spending a whopping $1,500 to have it flown to him from his home in London.

The hat was brought via taxi to Gatwick Airport, located south of London, where it was placed in the cockpit of a British Airways flight under the watchful eyes of the pilots so it wouldn’t be damaged by the passengers. The hat then took another taxi to be reunited with Bono a couple of hours before the show started and it reportedly arrived in perfect condition.

5. Oprah Winfrey has a bathtub carved into the shape of her body

Bathing is a hobby that Oprah Winfrey takes very seriously. “I major in bathtubs. I spend my time looking for the best possible bathtub a woman can buy,” she once told Vogue. “I love creating bathing experiences—bath gels, bubbles, crystals, salts, lavender milks,” she revealed to Harper’s Bazaar, adding: “I go prune. I go waaaay prune. I’ve gone to sleep.”

But it was only when she appeared on The Late Late Show back in 2018 that Winfrey revealed exactly how much of a bath connoisseur she really is. Imagining what Winfrey’s bathtub looks like, host James Corden first commented, “In my head, Oprah’s bath is like a Roman bath that only you go in yourself, and there are just general people around.” To this, Winfrey replied, “I do have a hand-carved tub… [carved] out of marble and onyx.”

When asked how many people would fit into the tub, Winfrey added, “You can get a couple in there. However, it was carved to the shape of my body.” The Selma star then gave audiences a glimpse into how one might acquire such a tub. “First, they do a model,” she explained. “They create a cast model, you lie in it. I told you—bathing, I’m serious about it.”

6. Brad Pitt spent a year searching for buried treasure because someone lied to him about it

So Pitt began digging mini pits. “I got obsessed,” he said, adding that he bought actual treasure-hunting equipment for the hunt. “Like for a year, this was all I could think about, just the excitement of it all.” However, it was all a lie. It turned out the man who told him about the gold was only trying to get Pitt to invest in a radar company. The actor then went on to admit that it was “pretty foolish in the end.”

What gift do you buy for your former bandmate’s baby shower when her husband is guaranteed to purchase “every single thing” his daughter needs in the world? If you are Kelly Rowland, you buy a bathtub. Not just any bathtub, but a very expensive, Swarovski-crystal-studded Baby Diamond Bathtub worth $5,200.

“I have no idea what I’m going to buy Beyoncé at the baby shower because Jay is going to buy that little girl every single thing possible,” Rowland told the UK’s BANG Showbiz. “She won’t be spoiled but she will be very well looked-after.” Crafted by California-based interior designer Lori Gardner, the baby-sized, footed, porcelain tub is covered in 44,928 imported crystals that Gardner reportedly spent more than two months applying by hand.

8. Justin Bieber spent $250,000 to customise his Cadillac CTS-V into a Batmobile

Back in 2011, 17-year-old Justin Bieber succumbed to his teenage desires and turned his Cadillac CTS-V into… a Batmobile. Customised by Ryan Friedlinghaus, the founder of West Coast Customs, the car was converted to meet Bieber’s preferences—complete with a black-on-black matte paint job with a Batman logo replacing the original Cadillac badge, ‘suicide’ doors and high-intensity discharge (HID) headlamps. A ‘JB’ logo was also featured on the side panels.

Shortly after the ‘Baby’ singer got behind the wheel, however, he was pulled over for cutting off a Highway Patrol officer and left with a warning. Batmobile? Nah, I only know the Bat-illac.

Most people would be thrilled just to get their hands on the latest iPhone model but Victoria Beckham’s $35,998-worth gold-plated iPhone 4 was a whole other level of indulgence back in 2011. The handcrafted phone was designed by Stuart Hughes and featured 150 grams of 24-carat gold. The best part? Paparazzi once snapped pictures of the ex-Spice Girls member at the airport—where her golden phone was seen flashing an image of topless David Beckham as the wallpaper.

In 2010, a source close to American singer and actress Lady Gaga told reporters: “She believes in paranormal activity and won’t take any risks when she is on the road. It’s important to her to be safe from spirits.” It was later revealed that Gaga is petrified of ghosts and has apparently had every hotel and tour venue she’s performed and stayed in scanned by a team of pro paranormal investigators.

The ‘Poker Face’ singer—who believes she is the reincarnated spirit of her dead aunt—has also reportedly splurged $50,000 on an Electro-Magnetic Field Reader, designed specifically to keep ghosts and other paranormal entities away while she performs on tour.