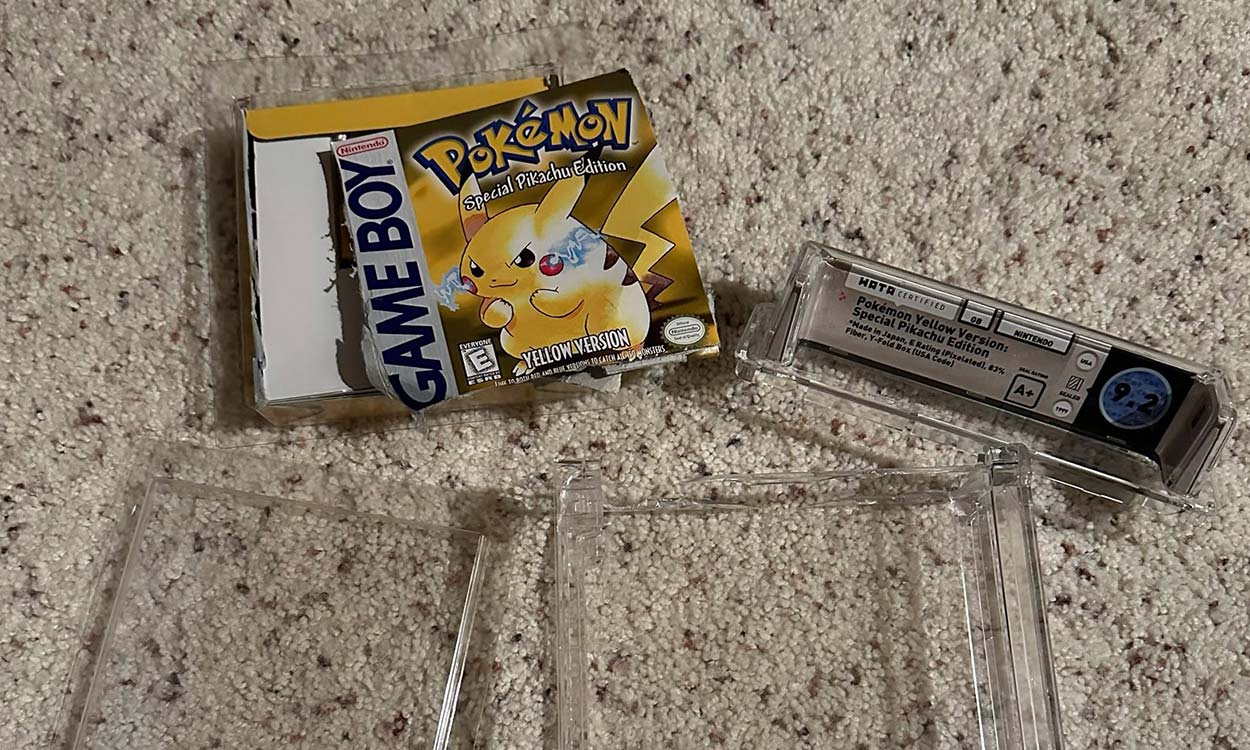 To both the dismay and appal of gaming enthusiasts worldwide, one unlucky collector has had his original, sealed copy of Pokémon Yellow: Special Pikachu Edition opened and subsequently ruined by US customs and Border Protection.

In what can only be described as an act of senseless brutality against gaming memorabilia, the near-mint collector’s item had its protective case broken, seal removed and front cover sliced off. Yes, you read that right—sliced off.

This gutting news comes directly from Stephen Kick, CEO of game developer Night Dive Studio, who tweeted on 19 January 2023 a picture of the destroyed box on behalf of the victim—a friend of the developer who goes by the handle @The_Master_Of_Unlocking. If you have a nostalgic heart, brace yourself because the image below is rough.

Users across the web were quick to voice their horror as to how something like this could happen. Did the US customs have to go to such destructive lengths to open the box and obliterate its value? One user from the r/retrogaming subreddit pointed out that if airports have machines that scan luggage, surely the customs office could’ve employed the same practice.

Kick replied to one disappointed spectator: “Maybe they thought a Pikachu was trapped inside?”

Needless to say, most folks weren’t happy. In an email correspondence with Kotaku, @The_Master_Of_Unlocking—who on 17 January agreed to pay $3,800 for the previously graded game—said that at first, he thought it was just the acrylic case that had been damaged and he wasn’t “particularly concerned,” but then he noticed the missing factory seal and subsequently saw that the entire front cover for the box had been sliced off. He went on to report that a PayPal dispute to figure the situation out is “still ongoing.”

It’s unlikely the customs office will pay for the damages, particularly as it’s within its rights to open goods that come through its warehouses. Nevertheless, we’re with @The_Master_Of_Unlocking on this one. The damage seemed senseless and deliberate. Surely there was a way around this to help preserve such a cherished part of gaming history?

Why do so many people have a problem with Wata Games?

Although numerous commenters were eager to share their sympathies for the damaged goods, many more were highly critical of the leading video game grading and certification service and the marketplace responsible for the retro find’s near $4,000 valuation, Wata Games.

Users were quick to highlight that the sealed Pokémon Yellow: Special Pikachu Edition should never have cost that much in the first place, and that Wata Games actively manipulated the marketplace for vintage games to turn a profit.

In May 2022, Video Games Chronicle reported that employees were said to be actively selling their own graded games for high prices, in a direct breach of the company’s own policies. Additionally, Wata is accused of conspiring with the auction house Heritage Auctions to artificially inflate the market.

Although the destruction of the near-pristine memorabilia is a tough one to watch, online spectators were quick to criticise Wata and the third-party grading of retro collectables.

Regardless of what you think of the arbitrary numerical grading of a collectible, it still sucks. Was the price tag completely unjust? We don’t know, but someone was willing to spend that much on the game, and look where it got them.

The blue hedgehog that was the bane of all parents in the mid-90s has had a rocky legacy since his days of stardom and glory. After being dethroned by the likes of Super Mario and Pokémon, the SEGA mascot has often struggled to find his footing in the gaming multiverse. The years haven’t been kind to Sonic, and the same seems to go for his creator, Yuji Naka, who has found himself arrested for a second time after taking part in insider trading while working at the Japanese studio, Square Enix.

Japanese outlet Asahi reported that Naka was re-arrested alongside another Square Enix employee, Taisuke Sazaki, on 7 December 2022. The pair are alleged to have purchased shares in game studio ATeam Entertainment based on non-public information regarding plans for Square Enix to collaborate with the Japanese developer on a Final Fantasy mobile title.

Although the mobile game has since ceased service, the pair are believed to have earned “hundreds of millions of yen” from the insider deal as share prices would have risen exponentially once the news was revealed—with Naka having reportedly made an investment of 144.7 million yen (roughly £800,000) in 120,000 shares.

The recent arrest comes just weeks after news broke that Naka had invested in another game production company back in early 2020 called Aiming, that had been developing a Dragon Quest mobile game with Square Enix, long before the revelations had gone public. The special investigations unit of the Tokyo District Prosecutors Office stated that Naka had bought 10,000 shares in Aiming for about 2.8 million yen (roughly £16,000). Although, expecting to make a pretty sum from the shares, it is unclear if the video game programmer ultimately managed to sell them.

This news came the day after two other former Square Enix employees, Taisuke Sazaki and Fumiaki Suzuki, faced similar charges for insider trading and investing in the same company during the same time frame.

When Square Enix was approached by Video Games Chronicle (VGC) for a statement, the company divulged that they were in full cooperation with the Tokyo District Prosecutors Office and claimed they “deeply regret the great concern this has caused. We have dealt with this incident strictly, including all disciplinary actions taken against suspected employees.” Only time will tell if this issue was symptomatic with the company.

A chaotic path beyond recovery

This isn’t the first patch of trouble Naka has had in recent years either. The former head of Sonic Team was met with huge financial disappointment in 2021 when his venture with Square Enix flatlined in the court of public opinion, resulting in incredibly poor critical reception and lukewarm sales.

The game, Balan Wonderland, was not the exciting return to form that fans and Naka had hoped for. The shaky development resulted in the creator being booted from Square Enix months before release—ultimately concluding in a messy lawsuit.

Perhaps this is what led a once great gaming icon down the path of insider trading, but more than likely is that he was tempted by the sweet chaos emerald that is money. Sonic might be making a comeback, but the same can’t be said for Naka.