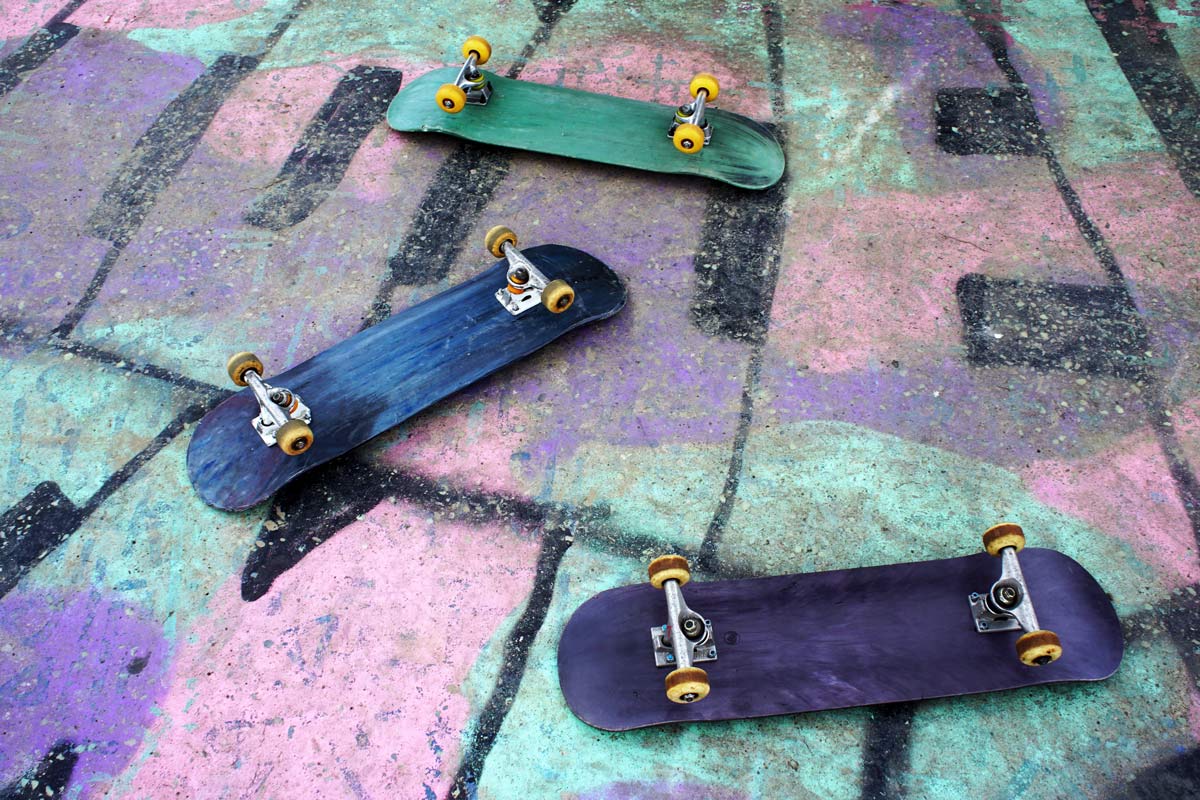 Skateboarding is a rough sport, full of skinned knees and shattered boards. That’s why industrial product designer Jason Knight thought to start making decks out of recycled plastic: “I wanted to create a product that shows people the deck’s physical properties, its strength and durability, more than just its beautiful appearance,” he says.

His live Kickstarter campaign is inviting backers to get early access to the boards—or in-depth open-source tutorials to produce them independently.

The challenges of working with recycled materials

Knight has always been a maker, and in university, he turned his interest toward recycled and sustainable materials in particular. It wasn’t always pleasant for his flatmates, though. His early process was rudimentary at best.

“I made the whole house smell super bad: I took plastic shopping bags and two pieces of wood and melted them by hand in the oven, then packed it into a ball, pressed it between two pieces of wood, and carved that little brick by hand.”

It was enough to show him the potential of the material. But to do it safely and at scale, he learned that he’d be much better off using machines that can shred, sheet press, extrude, and mould recycled plastic. They’re expensive—Knight estimates that you’d need £10,000 to get started with a full industrial rig—so he started looking into how he might be able to develop more accessible and affordable alternatives.

Knight’s research on the topic quickly brought him in touch with a group that was successfully doing the work already: Precious Plastic.

Since 2012, this open-source network of creative recyclers has been developing educational resources and machines to help more people like Knight affordably create recycled products. Instead of tens of thousands of dollars, these machines cost as little as $50, or at most a couple of thousand dollars. “They’re designed to be made with a relatively low set of skills and low machine requirements,” Knight explains, “so anyone with a hand drill and an angle grinder and a really basic welding machine can put them together and set up little plastic recycling ecosystems.”

“This is something like how a traditional woodworker has a saw and a drill in his garage or in his workshop,” Knight says. “We’re creating the machines to allow plastic recyclers to do the same.”

Around the time Knight joined the Precious Plastic community, the project won a €300,000 research grant and free space from the city of Eindhoven, in the Netherlands. Precious Plastic founder Dave Hakkens used these resources to set up a residency to host over 120 voluntary researchers with free room and board.

This year, the physical program has downsized but become more distributed and networked. “Everyone has branched off into doing their own things and setting up their own workspaces,” Knight explains. “People started workshops in the back of vans, to travel to different events for demonstrations, and people have bought or rented their own workshops and they’re starting their own product design facilities and doing their own research.”

The organisation’s global online community is now 80,000 strong. Forum and tutorial pages facilitate networked learning, and a map of participants helps members connect and support each other out in the world. “So it’s like this unification of plastic recyclers with a platform underneath, which allows us to work together and communicate efficiently,” Knight says.

Taking the idea to the ramps and rails

The time Knight has spent working with Precious Plastic has helped him see what types of products best highlight the material’s potential—and gave him the idea to make recycled plastic skateboard decks.

“When people see products made from recycled plastic, they think, ‘Oh, it looks really beautiful, the surface texture is really nice and aesthetically it’s really beautiful,’” Knight says. “What I think is often overlooked is the strength of the material: it’s actually really strong, tough and durable. So I wanted to create a product that basically when people see it being used, they immediately understand and think, ‘Wow, that’s really strong.’”

The recycled-plastic skateboard decks Knight has developed and is now offering in his Kickstarter campaign are more springy, with more pop than traditional boards, allowing higher jumps, better carving speed, and more flexibility to follow the curve of bowls. The surface texture is also slippy, so grinding tricks don’t require any board wax.

In testing them with skaters, he’s seen a range of reactions. “Some people are more set in their ways, some are super positive and excited about the possibility of doing new things—it feels different from a normal board and that sparks interest and curiosity,” he says.

Knight wants to create a new kind of board deck, yes, but more importantly, he wants to strengthen the recycling ecosystem and give people who would never normally have the opportunity to get a deck the chance to do so. That’s why he’s sharing open-source in-depth manufacturing instructions as part of his Kickstarter campaign.

These will include a video, a step-by-step picture guide, an electronics diagram, and a list of the components—“basically all of the information people need to replicate the system,” Knight says.

All of the research work that Knight and Precious Plastic do is published online for free, so anyone can replicate it. “This is to make it easy for people to implement the stuff that we design—we don’t want to just keep it and sell it ourselves to make a lot of profit. We want as many people as possible to be able to start replicating it, selling it themselves to local people, just so the project grows quicker and we can recycle plastic quicker,” he says. “It also creates a feedback loop of information and people share back innovations they discover,” again, speeding the development process.

“The clock is ticking for the ecosystem, we can’t just do it slowly, we have to be quite proactive and push this forward if we’re actually going to reverse the damage that’s happening.” 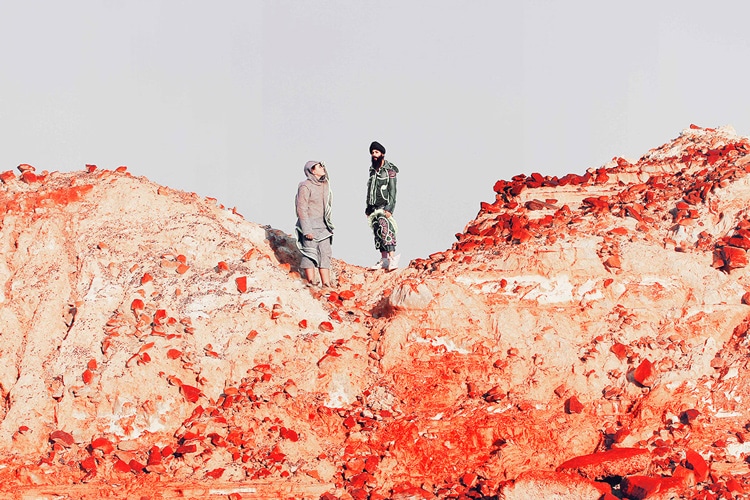 Could regenerated yarns made from ocean plastic be fashion’s future?

Every year 12.7 million tonnes of plastic seeps its way into the oceans, with some of it even getting trapped in the Arctic ice, lodged in the bellies of marine life and caught around turtle’s necks. As a result, many fashion brands are taking this as an opportunity to incorporate regenerated yarns into their collections. But is this a sustainable future for fashion and our planet?

Technology and fashion have merged to produce Bionic and Econyl yarns, which are being made from discarded plastic in the oceans. From water bottles to takeaway containers and even old fishing nets, it seems fashion has repurposed plastic firmly on its agenda. This plastic is being recycled into usable yarns for the creation of garments like trainers, sportswear, lingerie and even dresses.

These yarns are increasingly being used by local and global brands to create all types of textile products. Not only is this integration removing plastic from the oceans and reusing it, it’s also helping to improve local communities. Two years ago twelve tonnes of abandoned fishing nets were collected from the Basque region and turned into Econyl yarn; this is still being utilised today, forming part of clothing brand Ternua’s autumn winter 2018 collection.

But there are problems with repurposing plastic into garments. When any synthetic clothing is washed, tiny plastic fibres can be released from the fabrics and these microplastics can make their way into water systems. According to Mark Anthony Browne in Environmental Science & Technology, one single synthetic garment can produce nearly 2,000 microfibers per wash. As of July 2018, these microplastics—which are comparable to cosmetic beads—are going to be banned from sale in the U.K. because of the threat they pose to marine life as they find their way into food chains and cause serious harm to aquatic life. At the same time, the microscopic dimensions of these plastics means they cannot always be filtered by sewage systems, proving a real concern to the environment.

At the moment, fashion made from synthetic material is inevitable, it is and will be used to make throwaway fashion for the foreseeable future. The most common synthetic textile is polyethylene terephthalate (polyester), a plastic produced from crude oil and also used to create many other household items, from hosepipes to ketchup bottles. It is predicted that more than 98 percent of fiber production in the future will be synthetics, and of this, 95 percent will be polyester. Sure, repurposing old plastic is better than producing more. Yet a more long term solution would be to encourage the fashion industry to further push towards making garments from sustainable sources that will not prolong harmful effects on the environment.

Two fashion students in Delaware have created biodegradable shoes using a part of a mushroom called the mycelium, chicken feathers and textile waste. It is local innovation like this that will lead the fashion industry. Jillian Silverman, co-maker of these shoes said to Screen Shot, “Mycelium has been used in hard structures like packaging and insulation, and our proximity to the mushroom farms in Kennett Square, Pennsylvania, provided us with a great local material input.”

Aside from fabrics, there are other factors to making fashion entirely sustainable, especially for larger brands. Silverman continued, “The textile industry needs more sustainable production methods, materials, and end of life considerations; mycelium shoe sole can be produced with minimal energy, is nontoxic and safe to work with and wear, and can safely break down when it is no longer useful. Plenty of other bio-based materials offer similar benefits, and this sort of innovation is crucial to improving the apparel and footwear industries.”

The concept of producing clothing from yarns made from regenerated ocean plastic, in theory is a revolutionary idea, but the repercussions that result from washing synthetic fabrics does not actually improve the environmental problem of microplastics. Plastic conscious clothing is appealing to customers who are becoming more aware of environmental impacts but this cannot be seen as the final goal of the sustainable fashion trend. If synthetic clothing is an essential part of the fashion industry (and it shouldn’t be), then using old plastic that is polluting the sea is certainly better than creating more. Yet ideally fashion would look to use only sustainable and biodegradable fabrics to create garments like Silverman’s project and only when this happen—and other impacts like waste reduction, manufacturing practises and human impacts are improved—can fashion be praised for a lesser impact on the environment.