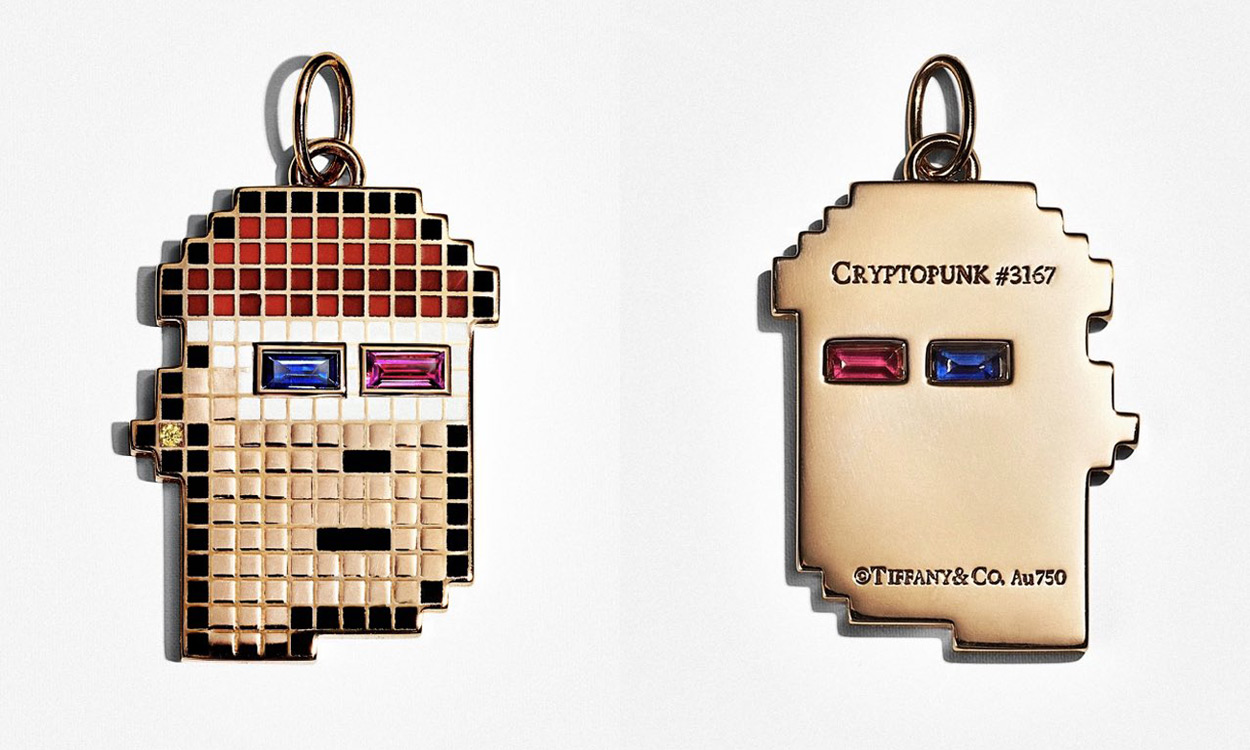 Following Adidas, Gucci and SUPERPLASTIC into the Web3 space is luxury jewellery brand Tiffany & Co. On Monday 1 August 2022, the jeweller announced that it will be launching its own non-fungible tokens (NFTs) exclusively available to CryptoPunk owners.

Dubbed ‘NFTiff’, the collection involves 250 digital passes which may be minted when purchased and redeemed by CryptoPunk holders for the creation of a bespoke pendant—along with an NFT artwork that resembles the final jewellery design.

The custom pendant is set to be designed and crafted by Tiffany & Co. artisans, who will convert 87 attributes and 159 colours that appear across the collection of 10,000 CryptoPunk NFTs into the most similar gemstone or enamel colour available. “Depending on which CryptoPunk owners purchase pendants, each piece will use at least 30 gemstones and/or diamonds to create the custom designs with the highest fidelity to the original NFT art,” NFTiff’s website reads. “Examples of gemstones include but are not limited to Sapphires, Amethyst, and Spinel.”

While NFTiff is set to launch on Friday 5 August at 9 am (CST)—priced at 30 Ethereum (ETH) or $50,000—and will only be available for purchase via its website, it should be noted that each customer is limited to a maximum of three token purchases.

Spearheaded by Tiffany & Co.’s executive vice president for product and communication, Alexandre Arnault, the process and first examples of the Punk pendants began in early April—following a boom in interest when he posted a photo of a rose gold and enamel Tiffany pendant made to look like his Cryptopunk #3167.

“These clients obviously skew a bit younger than our [classic] client base,” Arnault told Women’s Wear Daily. “It’s an anonymous [population], it’s not like you know who owns what, but what we generally understand is that they are younger and very affluent, a lot of them made large amounts of money in the crypto sphere. People need to understand that a lot of the things in their world are linked to luxury like desirability, scarcity, trends—they understand the ups and downs.” The publication also highlighted how Tiffany is among the first jewellers in its category to offer a bespoke jewellery service to NFT holders

While the project is only geared toward a base audience of 10,000 people, Arnault continued by stating that NFTiff “is a way for us to get into people’s lives who wouldn’t necessarily be primary customers of Tiffany.”

“It’s a way for people to get access to our brand,” he explained. “I don’t think we will be in the metaverse tomorrow morning, which is where these people spend most of their time, so it’s a nice way to reach this community without doing anything that doesn’t make sense for the brand.”

Tiffany & Co.’s announcement, however, seems to have caused a stir among the community in question—with the 30 ETH price being a major point of controversy. As noted by CNET, ETH is down a whopping 54 per cent since the beginning of the year. In fact, crypto is down so bad that NFT creators have shifted to lowering asking prices and even giving away NFTs for free in hopes that they’ll profit from secondary market royalties. All of this makes August 2022 a bold time to be launching such an expensive NFT collection.

At the same time, should all the limited-edition pendants sell out, Tiffany & Co. stands to make 7,500 ETH (currently $12.7 million).