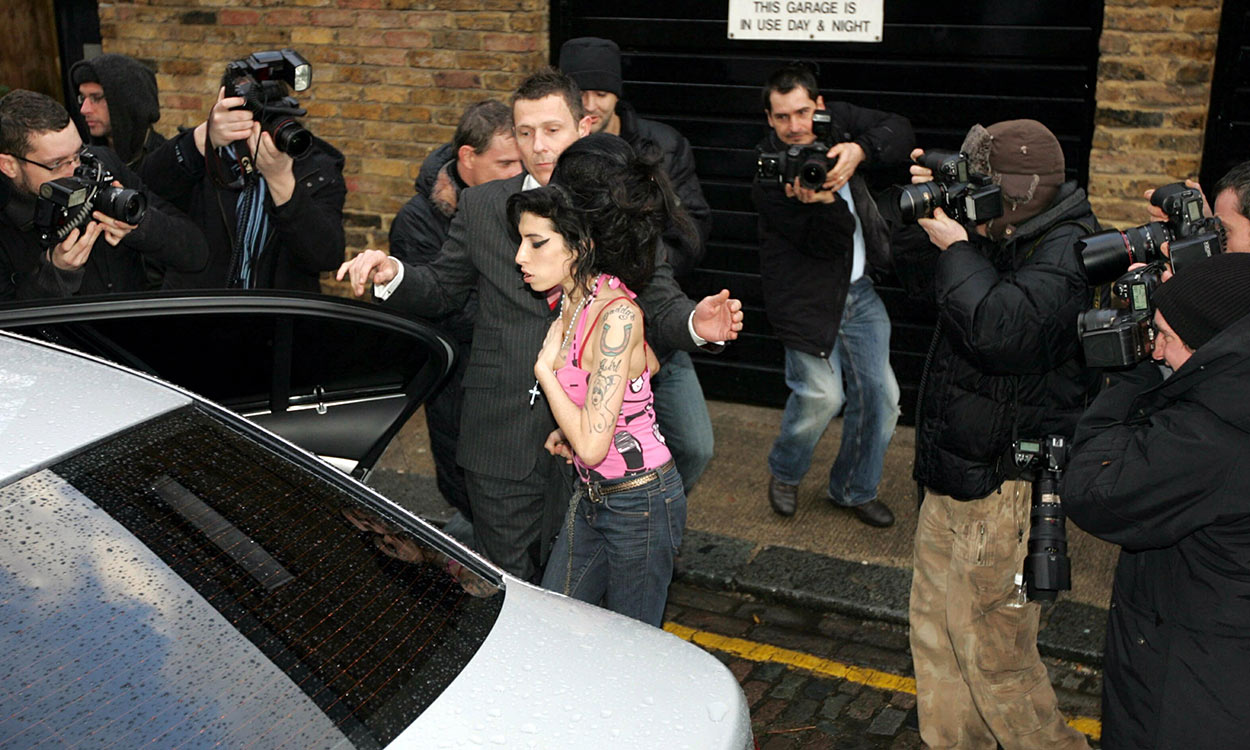 Though 2015 blessed us with Asif Kapadia’s heartwrenching and Oscar-winning documentary Amy, it’s somewhat surprising that it took eight years for someone to jump on a biopic about the British singer-songwriter Amy Winehouse.

But the time has finally come—a biopic, titled Back to Black after Winehouse’s most popular album, is now officially in the works. It even has a lead, BBC’s Industry star Marisa Abela, whose transformation into the singer was revealed in a first look on Friday 13 January 2023. Though Winehouse’s iconic beehive and heavy-winged eyeliner are definitely a staple of Abela’s character, since production for the movie has begun in London, the internet has made it its sole purpose to criticise every aspect of it.

Before we get into the nitty-gritty of why fans are already saying “no, no, no” to Back to Black, let’s take a look at what you should expect from the upcoming film.

Partnering with Focus Features and Monumental Pictures, distribution company Studio Canal has officially stated that filming started on Monday 16 January in the UK capital. Back to Black will be directed by British filmmaker Sam Taylor-Johnson—aka Aaron Taylor-Johnson’s wife, who she allegedly first met on the set of the 2009 film Nowhere Boy when Aaron was only 18 and Sam, 42. But we’ll get back to that point later.

Taylor-Johnson will be reuniting with writer Matt Greenhalgh, with whom she also collaborated on Nowhere Boy, which was another biopic of an iconic musical legend who died too soon, John Lennon. For those of you who have been living under a rock, Winehouse, who struggled with substance abuse both before and after her career blossomed, was found dead on 23 July 2011 from alcohol poisoning at the age of 27 at her home in Camden, North London.

Now, onto Abela’s role—the first major lead for the young British actress. Apart from playing the ambitious intern Yasmin in Industry, Abela will next be seen in Greta Gerwig’s highly anticipated Barbie, set to come out this summer.

As noted by Harper’s Bazaar, “crucially, she is also, like Winehouse, of Jewish descent—something the production team will likely have looked for—and she also has musical experience.” The 26-year-old, who only graduated from the Royal Academy of Dramatic Art (RADA) in 2019, recently confirmed that she will be playing Winehouse on her Instagram with a photo of her posing in front of a mural of the singer in Camden.

Though it’s almost been confirmed that Back to Black will cover Winehouse’s beginnings in Camden, her rise through the city’s jazz club scene, her early success with Frank as well as the stratospheric heights she reached with her second album, it’s yet to be confirmed whether or not the biopic will also reflect on the darker and more sinister aspects of her life, those that ultimately led to her tragically early death. One can only imagine that it will, at least for some part, with the omission of the many controversies surrounding Winehouse’s father, Mitch.

Speaking about how dear this project is to her, Taylor-Johnson said: “My connection to Amy began when I left college and was hanging out in the creatively diverse London borough of Camden. I got a job at the legendary KOKO Club, and I can still breathe every market stall, vintage shop and street. I first saw her perform at a talent show at Ronnie Scott’s Jazz Club in Soho and it was immediately obvious she wasn’t just ‘talent’… she was genius. As a filmmaker, you can’t really ask for more.”

She went on to add, “I am fully aware of the responsibility, and with my writing collaborator—Matt Greenhalgh—I will create a movie that we will all love and cherish forever. Just like we do Amy.” And boy is the pressure on!

On Twitter, among countless tweets criticising the filmmaker’s 23-year age gap with her husband and the actor’s age when they first got involved, fans of the late singer can be found speaking up about how wrong “capitalising off” Winehouse’s traumatic time in the spotlight feels.

Meanwhile on TikTok, users have been quick to highlight the current lack of originality in the movie industry—you’re telling me we’re about to get another Elvis biopic?—and went as far as to compare Abela’s Winehouse wardrobe to a cheap SHEIN knock-off…

American actor, singer, and television host Neil Patrick Harris is perhaps most well-known for playing Barney Stinson, the sassy, suit-wearing womaniser who was somehow still loveable in the hit television series How I Met Your Mother. Over the years, however, ‘the Barnacle’ has exhibited some not-so-loveable behaviour that routinely resurfaces on the internet.

One such video is currently dividing TikTok, with users increasingly calling for the actor to be held responsible for his long list of problematic actions. In the resurfaced clip, Harris can be seen discussing his “celebrity crush” during his 2015 appearance on The Wendy Williams Show.

After being put on the ‘hot seat’ by the host, Harris appears to hesitate before prefacing that his husband David Burtka was aware of his feelings—which somehow made it okay to share his thoughts on public television. “David knows it, so I guess it’s not a bad thing to say,” the actor remarked on these terms, later answering: “Nick Jonas.”

“He was really good-looking before it was kind of allowed to think he was good-looking,” Harris continued. “Which was a bit of a problem, you kind of had to wait till he turned to be, you know… 19, 20. You’re like, ‘What is happening?’” While Jonas himself was 22 years old at the time of the interview, he had been in the public eye throughout his teens—having shot to fame when was just 12 as a part of the Jonas Brothers in 2005. Meanwhile, Harris was 42 when he made the revelation.

Following his comments, the actor raised an eyebrow at Williams as he sought the host’s approval. While both Williams and the audience found his remarks rather entertaining at the time, the segment did not bode well with TikTok.

“Sometimes certain things shouldn’t be said out loud,” a user commented, while a second added: “I love his characters but him as a person… yikes.” A third echoed, “Neil is always doing something problematic.” However, some users voiced their support for the actor and argued that he was referring to a legal-aged Jonas.

“Neil actually acknowledged he couldn’t have said that while he was underage and he never did anything about it. Not predatory,” one said. “Why would they not get away with this? Simply saying this is no criminal offence,” another admitted. Meanwhile, others outlined how The Sun did a public countdown when Emma Watson turned 18. “Gay celebs seem to get more stick for this than anyone else,” they continued.

In the past, the now-49-year-old actor has exhibited a list of questionable behaviour. Less than three months after English singer and songwriter Amy Winehouse’s death in 2011, Harris had the worst Halloween idea in the history of Halloween ideas: a meat platter graphically rendered to resemble the icon’s rotting corpse. At the time, Harris and his husband Burtka served the dish at a party and thought it would be cool to name it “The Corpse of Amy Winehouse.”

Fast forward to May 2022, an image of the gross platter resurfaced on social media platforms and Harris faced renewed backlash for his stunt. He later apologised in a statement to Entertainment Weekly, explaining: “It was regrettable then, and it remains regrettable now. Amy Winehouse was a once-in-a-generation talent, and I’m sorry for any hurt this image caused.”

In 2018, since the actor couldn’t attend the Tony Awards, he took to Twitter and uploaded his live commentary throughout the event. It was then that Harris unnecessarily took a swipe at comedian Rachel Bloom. “Who is the woman in the top hat backstage at @TheTonyAwards?” Referencing his son, he added, “Gideon remarked that she says ‘like’ and ‘oh my god’ a lot. I’m confused…”

In an interview with GQ, Bloom later admitted how Harris’ reaction made her feel. “Basically… I saw that tweet. And I was kind of devastated,” she said. “I was actually going to tweet, ‘This makes me sad’.” Instead, Bloom responded with “I’m a big fan of yours. We’ve met numerous times and my husband, Dan Gregor, wrote for How I Met Your Mother for five years. Notably, he wrote the episode where your character finally meets his father.”

To this, Harris replied with an “Indeed! Well said. Thanks for the reminder. How was backstage?”—thereby dodging an apology. Following Bloom’s interview, however, he took to Twitter once again and voiced regret for his actions.

Harris has also previously made a poorly-timed joke about Dana Perry’s outfit at the 2015 Oscars, just moments after she dedicated her award to her son who died by suicide. “It takes a lot of balls to wear a dress like that,” the actor said. Although the comment didn’t land well with some, Perry later admitted that she thought it was fine.