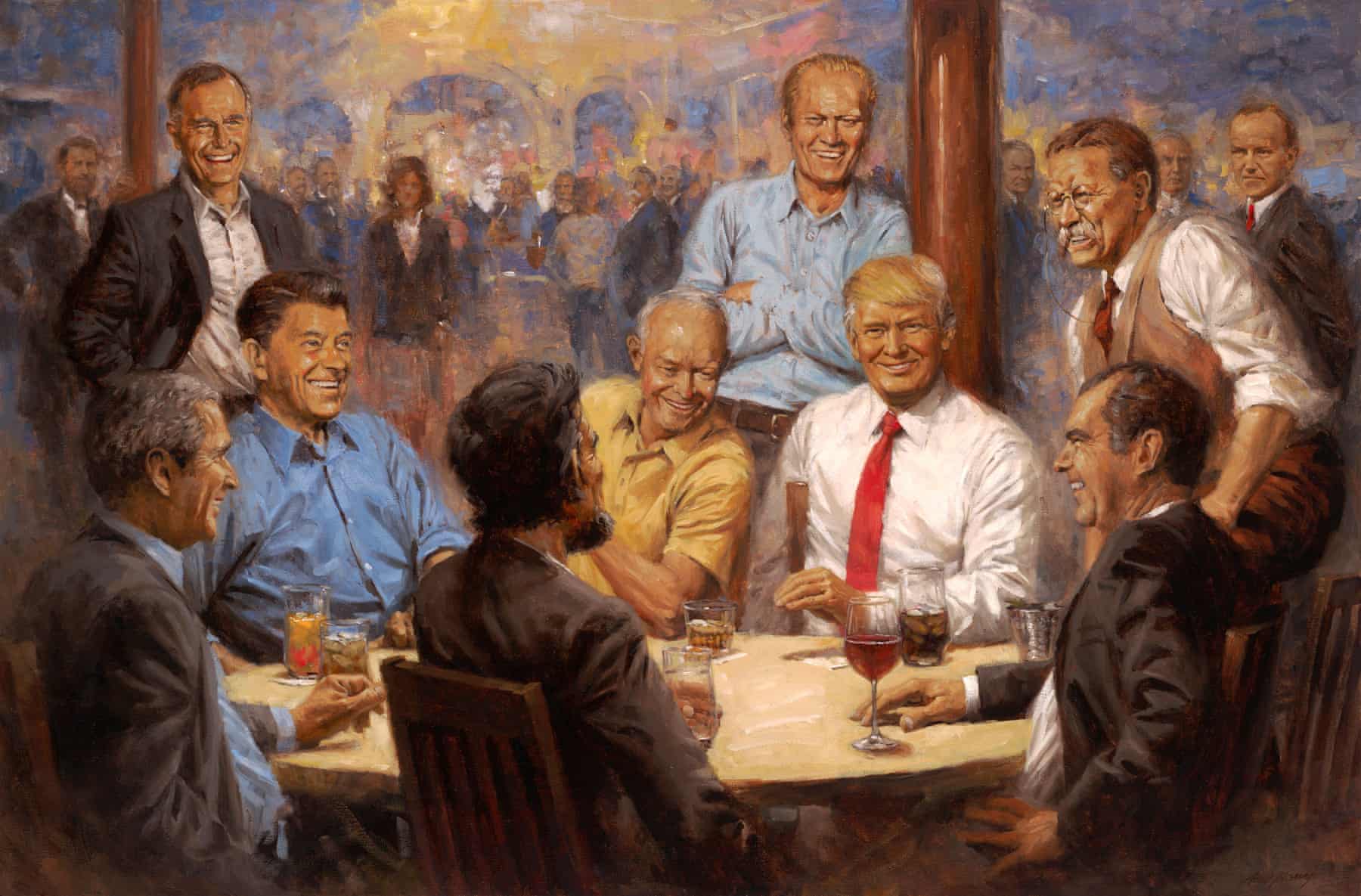 There’s a new painting in the White House

Donald Trump is not a man known for his taste. His aesthetic sensibilities seem lacking: he doesn’t appear to be able to find a well-fitted suit and he turned down a set of original Warhol prints for Trump Tower because they didn’t match the colour scheme and the interior decor for his various resorts rarely diverge from the classic combination of gold, glass and marble. “Trump’s design aesthetic is fascinatingly out of line with America’s past and present,” writes author Peter York. “The best aesthetic descriptor of Trump’s look, I’d argue, is dictator style.”

When he took over the White House, he described the place as “a real dump” while he renovated the premises last year. In the Oval Office, he replaced Childe Hassam’s painting Avenue in the Rain with a portrait of Andrew Jackson, the seventh President. He has also hung pictures of his inauguration—featuring a falsely inflated crowd—and the electoral college map, presumably missing the final vote tally.

Now, thanks to eagle-eyed viewers of 60 Minutes, we know that he has recently hung up a group portrait of past Republican presidents in the West Wing. The print is by Andy Thomas, a self- taught artist who usually paints cowboy and Civil War scenes. Trump received the print as a gift from Congressman Darrell Issa and he subsequently phoned up Thomas to express his delight with the piece. “One thing he specifically mentioned was he didn’t usually like portraits of himself,” he recounted to the New York Times. “But he said that he really liked that one.” Perhaps this is because Trump appears noticeably slimmer than in real life, although this is something Thomas regularly does. “I do that with everyone, even self-portraits—it’s a feel-good painting and I make them as good-looking as I can,” he explained. But here, Trump, with his signature Diet Coke on ice, is also the centre of attention, grinning smugly as the other Presidents laugh—presumably—at his joke. (“How many Mexicans does it take to build a wall?”)

Eisenhower, Lincoln, Reagan, W. Bush, Nixon all sit around the table, with Roosevelt, Ford and H. W. Bush standing around. In the distance, Coolidge and Harding look on, as excluded from this conversation as they are from many people’s memories. “Wait, this is a club of all the past men who served as a Republican United States President!” reads Thomas’ description. “Who could that female be walking directly to the table? One can only guess.” (It’s worth noting Thomas has also produced an equivalent painting of notable Democrat presidents). Of course, this type of group portraiture is far from unusual: donors were often included in Christian altarpieces, painted into grand compositions alongside saints, the Virgin Mary and Christ. And in a more presidential vein, an 1866 print depicts Abraham Lincoln—who was assassinated the previous year—being greeted in heaven by George Washington, thereby aligning the two men in a pre-Mount Rushmore America.

In Trump’s group portrait, the only two living presidents, H.W. and W. Bush, are furthest from the incumbent. Lincoln, the first Republican president, sits opposite Trump, although we can’t see his expression. What might Trump’s fondness of this painting tell us about him? It’s hardly high-brow art (not that Thomas ever claimed it as such). Is he trying to write history by placing himself along well-known and celebrated former presidents? He once described himself as “your favourite—of all time—president,” so this is hardly a stretch. Or even to rewrite history? Not known as a stickler for the truth, this too seems possible.

Other than the title of Republican, one which Trump has not always worn, I’m not sure there is a single ideology that would actually unite the men sat around this table. The Republican Party of Lincoln is far from that of today: it was, at the time, to the left of the Southern Democratic Party, who defended slavery. Its base was rooted in the Northern states through the Progressive Era and the terms of Warren G. Harding, Calvin Coolidge and Herbert Hoover (not pictured). What would these men make of Trump, his divisionism, his remarks that there were “very fine people on both sides” at a far-right/Antifa march? (Note that Eisenhower was a five-star general who was one of the architects of the Allied invasion of France and Germany.) And while he might seem more at home alongside Reagan and, most of all, Nixon, at least they knew that Russia were the bad guys—and where Russia is.

Perhaps, above all else, this painting represents the absurdity, the sheer surrealism, of our current political situation. How has the Republican Party come to this? Divisive populism and downright lies dominate; with the loss of Senator John McCain earlier this year, the party lost a part of its history and a lot of its soul.

This whole situation—a reality show producer sharing drinks with legendary statesmen—should be impossible, yet here it is, hanging on the wall of the White House. 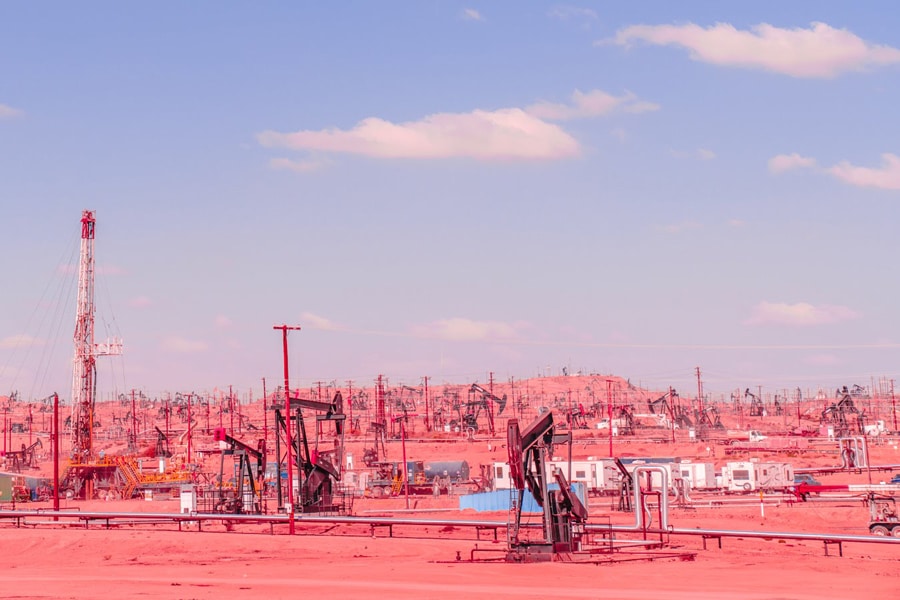 Why is the U.S. paying no attention to climate change? Because of Trump

Things are heating up in the U.S., with 2018 being the 4th hottest year on record. Natural disasters in the U.S. alone the past year cost the country nearly $91 billion dollars, and as temperature globally increases, it’s almost guaranteed that the volatility of these natural disasters will become more and more reoccurring, bringing on more droughts, more floods, and more hurricanes.

Countless groups and agencies have published reports demonising our global GHG emissions, the rate of animal extinction, and our eating habits. The results have lead to some countries proving much-needed leadership in regards to environmental consideration and adaptation. The U.S., amongst all of this, seems to be impressively absent amidst the global conversation, and mostly a mess in terms of internal action.

The bombardment of pictures, tweets, video clips, and news headlines seems overwhelming—how can anyone not understand that there is a dire need for the U.S. to focus on climate change? According to a Yale University study, a majority of Americans don’t believe that climate change will harm them directly. This confusion can be attributed to a lack of true understanding of what climate change is, as well as not comprehending that it will affect human health.

Though commonly agreed on by politicians within a variety of countries, at fault for this lack of general knowledge is the current political administration in the United States, and their refusal to acknowledge the catastrophic future of climate change.

The age of Trump has seen many losses within the realm of environmentalism, which has made the administration infamous amongst other nations. Setting the tone at the start of his presidency, the Trump administration pulled out of the Paris Climate Agreement. Since, the Trump administration has taken on many disheartening actions, like dropping climate change from the list of national security threats, and attempting to scrap the clean power plan policy put in place by the Obama administration. Trump has made his stance on the matter clear, confusing many citizens about the urgency of climate action.

Luckily, it is evident that many people are very unhappy with the U.S.’s current strides towards a greener world. As a result, we’ve seen an uprising of random pockets of environmental concern. Short-sighted solutions for long-term environmental issues seem to be developing in the little wiggle room available without governmental backing and funds. Mitigative solutions such as releasing hundreds of goats to clear dead bush in California as they prepare for another potentially devastating summer of fires splash across headlines. Beyond Meat’s IPO has demonstrated consumers’ desire to promote healthier and more conscious eating standards. The no-straw movement has lead to the demonisation of what used to be a common tool used day-to-day. These strings of actions, though important, are unfortunately not the most urgent action needed in today’s world to truly tackle a reduction in emissions, and certainly not what you would expect from a powerhouse country.

As the country struggles to navigate through the confusion, anxiety, and realness of climate change, the most obvious lack of understanding can be directly linked to the lack of political unity concerning the matter. Policies like the Green New Deal, or others that would reduce emissions and create substantive long-term committed change for the country are lacking during the most crucial of times. Each region of the U.S. will undeniably be affected differently as temperatures continue to rise. The question of how impactful these effects will be, how costly, and how deadly are all related to how the administration chooses to act now. So please Donald, do something quick.