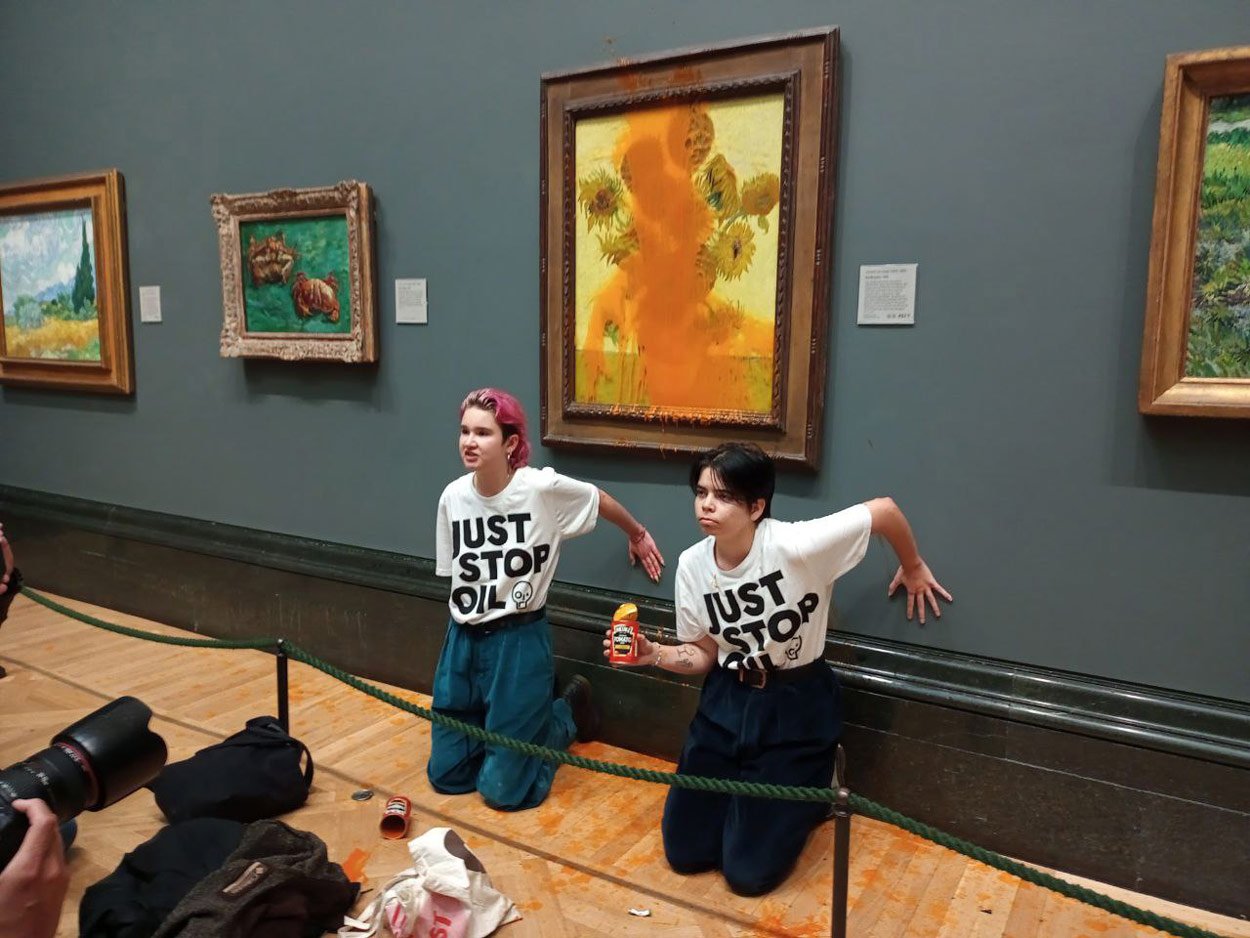 Any UK-based individual who frequents the world wide web will be well aware of the latest Just Stop Oil climate protest—you know, the one that involved two cans of Heinz tomato soup. Well, this latest form of activism subsequently resulted in the short-lived birth—and death—of a wild TikTok conspiracy theory.

In case you indulged in a digital detox over the weekend, let’s do a quick recap. On Friday 14 October 2022, two Just Stop Oil activists entered the National Gallery in the heart of London armed with super glue and tomato soup. Moments later, they threw the pulpy liquid over Vincent Van Gogh’s ‘Sunflowers’ painting and proceeded to glue their hands to the wall.

In video footage of the event, one of the activists, 21-year-old Phoebe Plummer, can be heard exclaiming, “What is worth more, art or life? Is it worth more than food? More than justice? Are you more concerned about the protection of a painting or the protection of our planet and people?”

“The cost of living crisis is part of the cost of the oil crisis, fuel is unaffordable to millions of cold, hungry families. They can’t even afford to heat a tin of soup,” Plummer continued.

According to The Guardian, not long after this, Plummer and fellow activist Anna Holland were escorted out of the museum and arrested for criminal damages and aggravated trespassing. It should be noted that the painting was protected by a glass screen—a factor that Just Stop Oil claimed they took into consideration.

While shocking to some, this may appear as solely an escalation in action among a series of Just Stop Oil environmental protests that have been popping up across the capital over the past few weeks. The UK-based organisation is a coalition of different groups and, according to its website, is motivated by its primary goal which is securing a government ban of “new licences and consents for the exploration, development and production of fossil fuels in the UK.”

Just recently, the group blocked a number of major London roads—glueing themselves to the tarmac and displaying banners which call upon the government to enact a moratorium on all upcoming oil and gas projects, as reported by The Guardian.

This most recent disruption at the National Gallery, however, sent shockwaves through the ether, particularly after certain netizens began claiming that the attack on the Van Gogh painting was secretly funded by Big Oil themselves as a publicity stunt to depict climate activists as evil, malicious… and supposedly anti-art?

In a recently uploaded TikTok video that has since been removed, a woman claimed that Just Stop Oil’s latest protest is nothing more than a facade, conjured up to portray climate activists negatively. Her evidence? The fact that the environmental activist group has, in the past, received large donations from Big Oil heiress Aileen Getty, the granddaughter of industry mogul, Jean Paul Getty.

Before we venture into the debunking of this conspiracy theory, it should be noted that, on the surface, it’s not insanely far-fetched. Getty does come from a dynasty of oil, her family having been involved in the industry for over a century. Therefore, it would not be completely absurd to consider the possibility that she funded Just Stop Oil—and its most outrageous protests—in an attempt to influence public opinion.

If we take a closer look, however, we can see that this just isn’t the case. Upon a quick Google search for ‘Aileen Getty’, you almost immediately come across the Climate Emergency Fund (CEF). This organisation specialises in funding and supporting disruptive protests and activists to have a transformative impact on protecting humanity and the living world.

Getty is the founding donor of the CEF and, as reported by NPR, contributed $500,000 to kickstart the organisation. While she may have foundations in oil, the heiress has gone to extreme lengths to support the climate emergency cause. The Aileen Getty Foundation has also shifted a bulk of vital resources to different organisations—such as Just Stop Oil—and individuals who are addressing the climate emergency.

As aptly noted by TikTok user Tom Nicholas, “Aileen Getty’s well-documented and well-publicised donations to climate action groups appear to be more the result of being someone who feels guilty of where her family’s wealth has come from, rather than any kind of attempt to undermine the climate movement.”

Only two years ago, in 2020, The New York Times credited Getty with acknowledging her family’s past impact on climate change and for taking steps to actively remove fossil fuels from her portfolio in favour of sustainable investments.

Just Stop Oil is a tenacious coalition of activists and as long as its protest tactics continue and catch nationwide attention, I’m sure that a cohort of ‘follow-the-money’ conspiracy theories will trail right behind. 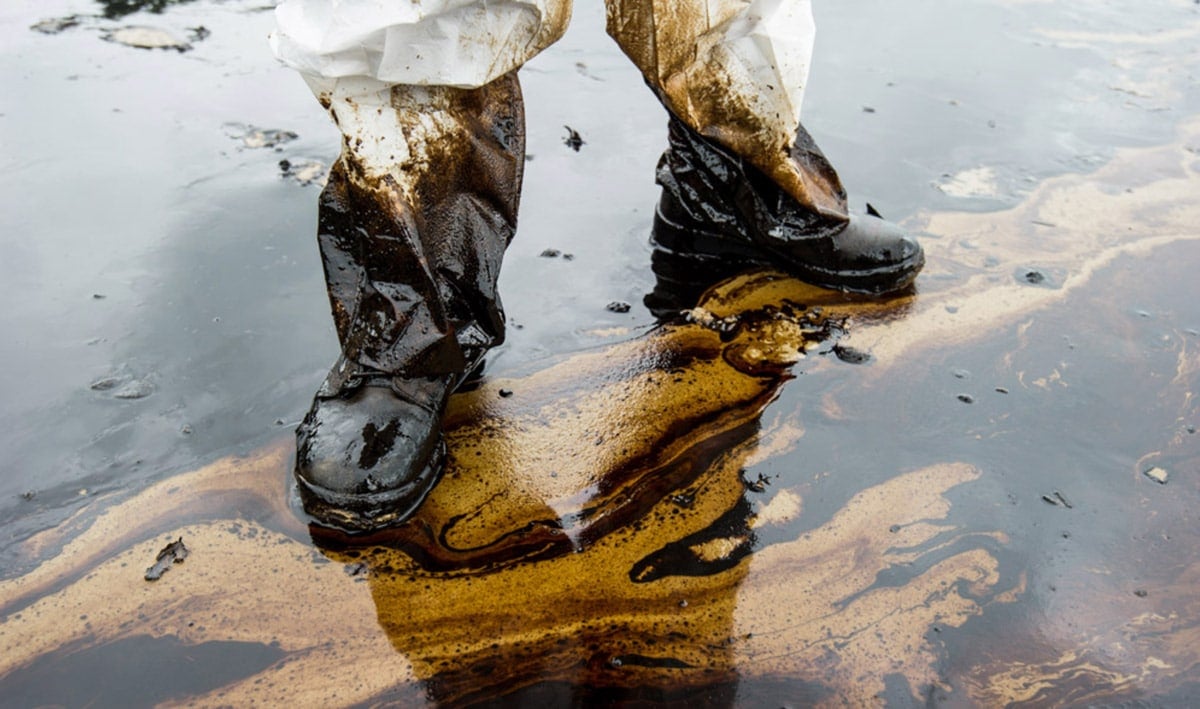 Mauritius oil spill: Everything you need to know and how you can help now

What is the oil spill about in Mauritius?

Over the past few weeks, a ship and its surroundings are in panic as the Japanese owned bulk carrier ran aground on a reef at Pointe d’Esny, a known sanctuary for rare wildlife in Mauritius. The MV Wakashio, owned by the Nagashiki Shipping Company, struck the reef on July 25. Over the last two weeks, oil has been seeping into waters that are home to what is one of the most ecologically diverse and pristine oceans in the world. Greenpeace said the spill is likely to be one of the most terrible ecological crises Mauritius has ever seen.

Prime Minister Pravind Kumar Jugnauth declared a state of environmental emergency, pleading for international help as the fuel began leaking from a crack in the vessel’s hull. Greenpeace stated that “Thousands of species around the pristine lagoons of Blue Bay, Pointe d’Esny and Mahebourg are at risk of drowning in a sea of pollution, with dire consequences for Mauritius’s economy, food security and health.”

Mauritius is famous for its coral reefs and marine life, this disaster could lead to a staggering upset of the islands future economy as well as devastate the surrounding ocean.

What do oil spills do?

Oil spills destroy and kill everything in the way of their path, so the local community is scrambling together to contain and control the damage, but this is not enough—the cracks that have already leaked more than 1000 tonnes of fuel are growing, with a further 2,500 tonnes of oil on board to pressure these cracks into a ship split in two.

The prime minister of the Indian Ocean nation, Pravind Jugnauth, has said that response crews are only just managing to slow the leak, but that the island was bracing for the worst. “The cracks have grown. The situation is even worse,” he told reporters “The risk of the boat breaking in half still exists.”

Heartbreak shadows thousands of volunteers’ faces as they desperately fight to hold back the deadly tides, ignoring official instructions to stay uninvolved, the people string together improvised floating barriers, made of straw stuffed into fabric sacks. The government was slow to act, “The authorities did nothing for days. Now they are but it’s too late. I am angry.” said local taxi driver Fezal Noordaully.

Environmental activist Ashok Subron told AFP news that “People have realised that they need to take things into their hands. We are here to protect our fauna and flora.”

Akihiko Ono who is the executive vice-president of Mitsui OSK Lines apologised for the spill and for “the great trouble we have caused.” He vowed that the company would do “everything in their power to resolve the issue.”

The spill is a double blow: for the fragile environment that global warming and pollution have been increasingly threatening to collapse, and for the tourism that the island’s economy is predominantly built on, which Mauritians had hoped foreign tourists would be able to return soon as the area was already affected by the coronavirus pandemic.

The suffocation that living organisms are forced by humans to endure is unimaginable. The extent and spread of the black oil slick can be seen from space, and is growing. And the menacing sludge that is almost impossible to dissolve without the necessary machinery, that the island did not have, will continue to leak. Maybe 2020 will be the year that we realise what disasters are created by a delay in response.