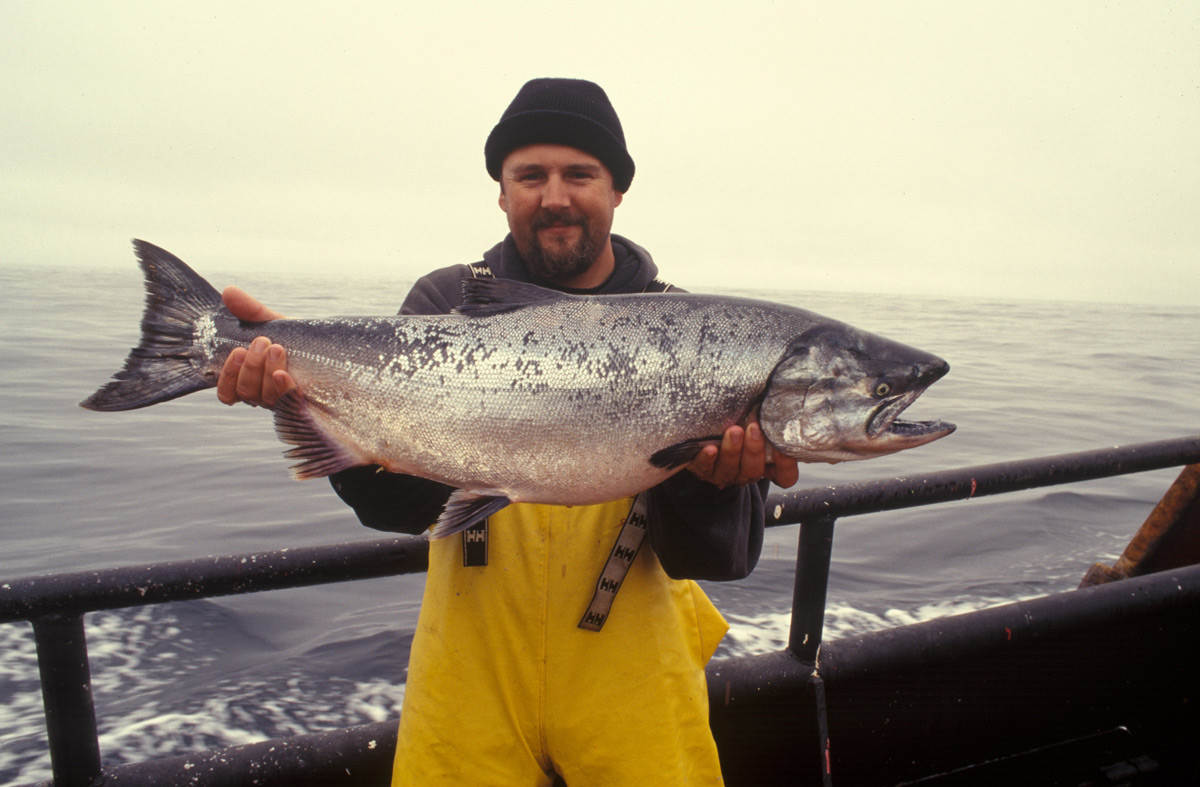 Salmon sperm is being used to make eco-friendly plastic

Researchers at Tianjin University (TJU) in China have developed a sustainable, biodegradable plastic derived from salmon sperm and vegetable oil, which might just be the most viable solution yet for the world’s imminent plastic pollution problem.

The promising material was created by extracting strands of DNA from the sperm of salmon—although it should be noted that the semen could come from just about any living thing—and dissolving the genetic matter in water with ionomers, a type of polymer commonly found in adhesives, to produce a gel that’s pliable enough to be moulded into various forms such as a cup. The substance is then freeze-dried to set the shape.

The researchers’ experimentation led to the creation of a rumpled-looking cup, a model of DNA and puzzle pieces, all made of what they call “DNA-based plastic.” Both DNA and plastics are made of polymers, which may be naturally occurring or synthetic (the former abundantly available in plants, animals and bacteria, and the latter relying on petroleum oil, also known as fossil fuels).

The result looks and feels somewhat like plastic but produces less than 5 per cent of the carbon emissions generated during typical polystyrene plastic manufacturing, according to a recent study published in the Journal of the American Chemical Society.

“To the best of our knowledge, our reported DNA plastics are the most environmentally sustainable materials of any known plastics,” said lead researcher Dayong Yang, The Times of London first reported in October 2021.

It goes without saying that plastic products are often used to contain liquid. But considering that rehydration of the eco-friendly material is needed in order for it to be recycled, using it as a viable cup option is probably out of the question—not to mention that drinking from a cup made out of dried fish sperm probably isn’t anyone’s go-to move. That being said, it theoretically could be used for other non-moisture related purposes such as electronics and other forms of packaging. Researchers have also suggested that such bioplastic vessels would have to be treated with a waterproofing material, which could, unfortunately, diminish its recyclability.

Yang’s team found their invention “showed obvious superiority in terms of biodegradability, the production of by-products, [carbon] emission, energy consumption and processing quality,” they wrote in their report.

Their research comes as scientists scramble to find solutions to reduce plastic waste. In the US alone, more than 30 million tons of plastic are discarded annually, only 8 per cent of which gets recycled, according to a 2019 report by the Plastic Pollution Coalition, which was first highlighted in a New York Post article. Much of the rest ends up in landfills, while another 1 to 2 million tons is littered on land and in water, where it may be broken down into microplastics, and later consumed by animals and humans alike.

Meanwhile in the UK, a 2021 report from Greenpeace unveiled that only 10 per cent of our plastics are recycled while the rest is, quite literally, dumped in other countries. Reporting on the matter for Screen Shot, Jack Ramage wrote, “Investigating ten sites across Southern Turkey, in its latest report, Thrashed, Greenpeace found plastics from major UK supermarkets burned or dumped. Plastic waste was also found in waterways, floating downstream and washing up on the Mediterranean coast.”

Considering how abundant DNA is as a resource, this new hydrogel plastic could prove to be a good alternative. How scientists will collect enough sperm to make mass production possible is another problem we’re not quite ready to face just yet. 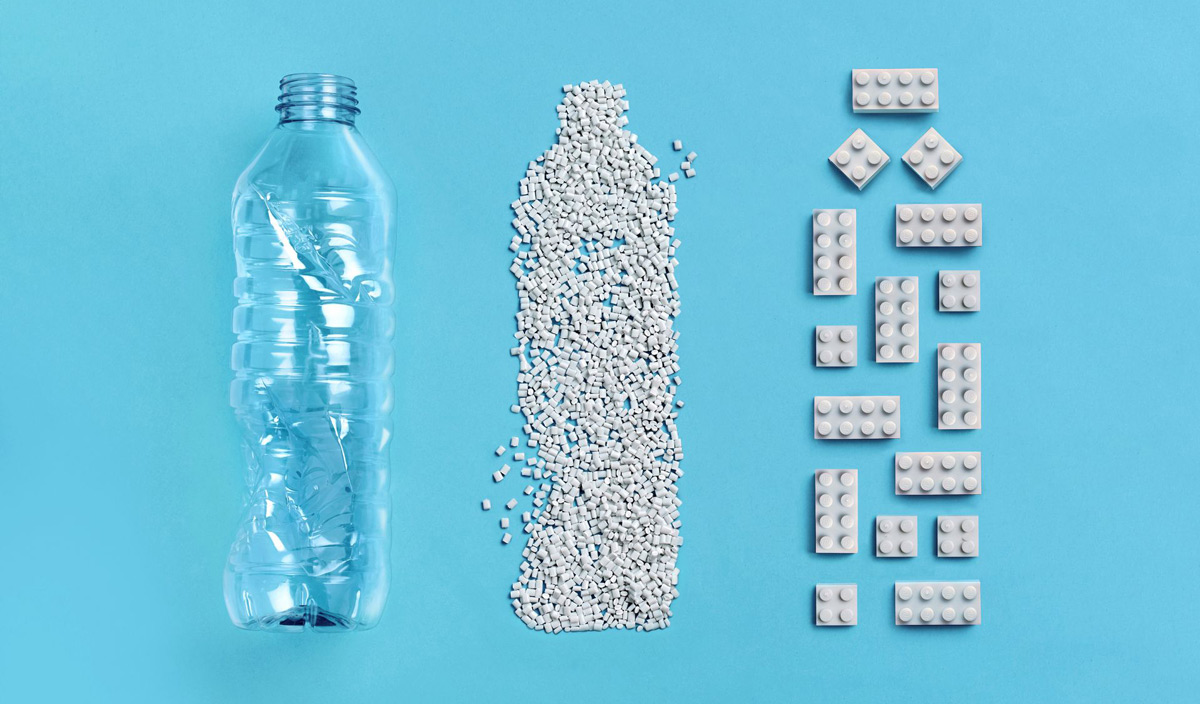 Each year the world produces more than 380 million tons of plastic and Danish toy giant LEGO is responsible for 100,000 metric tons of it. Although LEGO’s contribution to the annual total appears to be a needle in the plastic haystack, it counts—given the fact that 80 per cent of it’s classic toy bricks are being made from acrylonitrile-butadiene-styrene (ABS). Prized for its strength and rigidity, ABS is a petroleum-based thermoplastic that takes years to break down into the Earth.

So if you were expecting LEGO to release an innovative brick that hurts less when you step on it, hold your horses—the company has more pressing matters to address. A recent breakthrough, however, seems to be one of the biggest leaps for the toymaker to ensure sustainable playtimes deep into the future.

In 2015, after pumping out 66 years worth of unrecyclable plastic, LEGO announced its plans to set up a Sustainable Materials Centre in Billund, Denmark. Two years later, a team of more than 150 engineers and scientists leveraged sugarcane to create a sustainable polyethylene. “Sugarcane grows at the same rate as we use it, is sourced sustainably using guidance from our partner WWF and doesn’t compromise food security,” LEGO’s website reads.

Although the innovation was hailed as a great success, it could only be used to produce softer and non-load-bearing pieces—like trees and leaves, which only account for 2 per cent of its products—due to its less-than-rigid nature. “Because we want our products to be durable and safe for generations of children, this plant-based plastic is not biodegradable,” LEGO said in 2018.

Fast forwarding to 2021, the toy giant has moved on from bendy bioplastic. It has now unveiled a new prototype block using polyethylene terephthalate (PET)—made from discarded plastic bottles—with a 1-litre container yielding about ten standard LEGO bricks. Expected to hit shelves in 18 to 24 months after further testing, the prototype is the very first brick made from a recycled material to meet most of LEGO’s quality and safety requirements.

One of the biggest challenges in LEGO’s sustainable journey is rethinking and innovating new materials that are as durable, strong and high quality as its existing bricks. “The goal is to find a product good enough that people don’t notice the difference,” said Tim Brooks, LEGO’s vice president of environmental responsibility. In an interview with the BBC, Brooks explained that the next stage would be to add colours and test them with children and adult fans. The company admitted that it will use recycled material from plastic bottles that are certified as ‘safe to handle beverages’ in the US and Europe. However, plastic recovered from the oceans would not be suitable due to its typically degraded state.

“Typically, LEGO is durable enough to last for two to three generations of humans playing with it and that is what the firm is aiming for with its PET blocks,” Brooks said. Amid its sustainability push, LEGO has thereby decided to make its blocks durable rather than biodegradable—banking on customers saving and passing the blocks down generations to come.

A major challenge with the blocks, according to Brooks, is getting the ‘clutch’ right. That is, children being able to stick the blocks together and pull them apart with their fingers, regardless of the ambient temperature.

Over the past three years, LEGO has tested more than 250 variations of PET materials. “Some materials they [the scientists] tested couldn’t even be pried apart with pliers,” Brooks said. With its new PET brick, however, LEGO has nearly cracked it. “We need to now work on how to slightly tighten the clutch and how to add colors to the brick,” Brooks. “When we do that, we’ll go through shape by shape and determine how many ABS bricks can be replaced by PET.”

The key here, as WIRED noted, is the popularity of the 2×4 brick out of the 3,500 shapes LEGO produces. If the company replaces this standard block with a recycled version, it will have a significant impact on the environmental goal LEGO has set: to eliminate the use of oil-based plastics by 2030. “We have what we call ‘high runners’,” Brooks added. “For example, we know that most sets will have a 2×4, certainly we know pretty much every set will have a 1×1 dot. That is by far the most common brick that we make.”