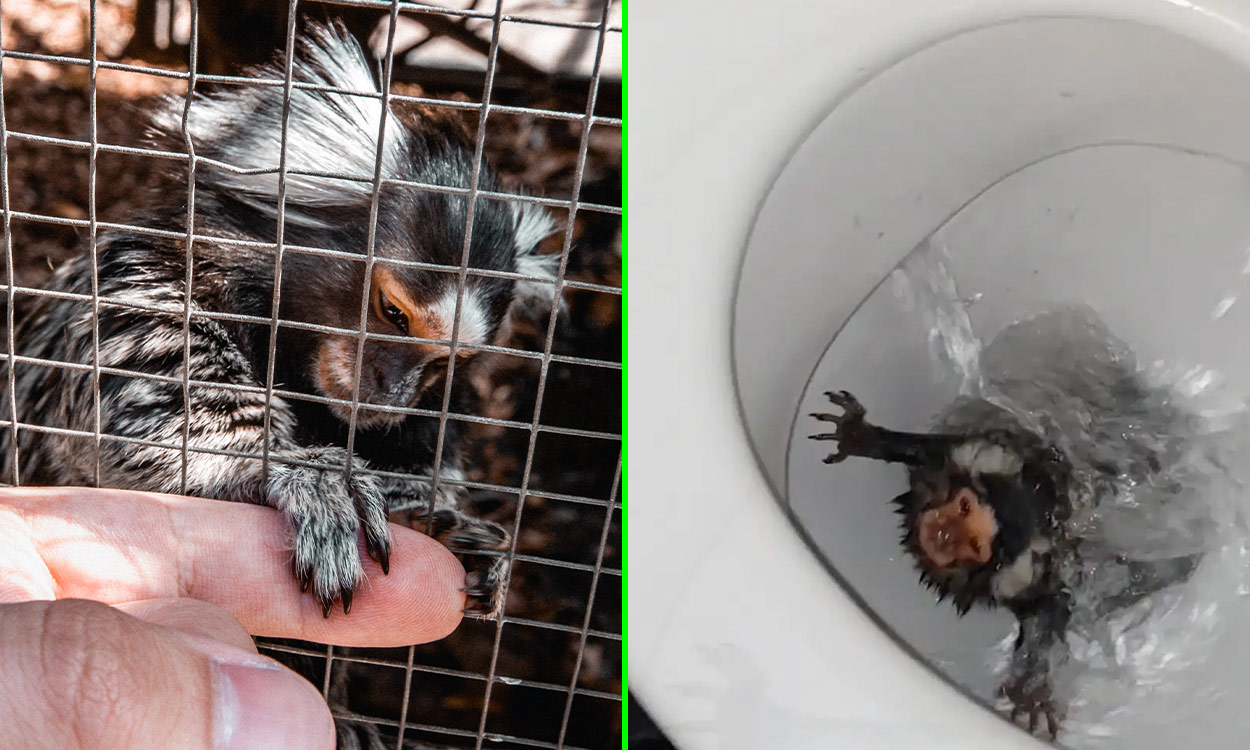 In 2021, Vicki Holland, 39, was banned from owning animals for life after incredibly disturbing footage was discovered on her mobile phone. The mother of four had picked up the habit of filming herself deliberately inflicting pain and damage onto her small marmoset monkey, Milly.

LADbible reported that, in almost all of the 22 videos found on Holland’s phone, Milly was repeatedly subjected to a great amount of abuse and harm. The monkey was forced to eat kebabs, sausages and burgers.

In one particularly harrowing clip, Holland can be seen holding out her fingers—which have been covered entirely in cocaine—and encouraging the monkey to lick them.

Other forms of abuse documented include Milly being ferociously chased by a dog and kept in a filth-ridden cage with barely any access to sunlight or basic amenities. Most upsetting of all is a video where Milly can be seen paralysed with fear after having been placed in a toilet bowl. As the clip progresses, Holland can be heard flushing the toilet and exclaiming: “Come out… I wanna pee,” while the poor animal stares up into the camera, petrified and gripping onto the sides of the bowl.

Marmoset monkeys are incredibly unique and have very specific wildlife needs. According to the Royal Society for the Prevention of Cruelty to Animals (RSPCA), marmosets are the most commonly kept and traded species of primate. Their small size makes them desirable pets, however, they are often sold to unreliable and irresponsible owners who mistreat the animals and leave them scarred for life.

The extent of Milly’s abuse was uncovered last year in the midst of a drugs raid at the abuser’s house. Holland and her partner Russell Cox were found to have large stashes of cocaine hidden in their home—with over £1,600 worth of the Class A drug having been hidden in chocolate Kinder eggs. Thankfully, after having confiscated Holland’s phone, the police were able to expose the horrendous animal abuse.

Both individuals confessed intent to supply and were charged with criminal sentences, with Cox jailed for 30 months and Holland receiving 20 months in prison—alongside the lifelong animal ban.

During the trial in 2021, Newport Magistrates’ court heard the horrifying details of the abuse. Prosecutor, Alan Watkins, expressed how Holland had shown “total disregard to the basic care and needs of her pet,” adding, “This is deliberate infliction—this isn’t neglect.”

At the beginning of 2022, Milly was happily rehomed at Monkey World in Dorset, where she has even found companionship in a fellow marmoset monkey, Moon.

According to Sophie Daniels, an RSPCA inspector who helped rescue Milly, “Moon was quick to respond to Milly’s alarm calls and would stand by her side to reassure her—which has helped her learn to trust again. Now the pair are inseparable and love spending time in their large enclosure hunting insects and enjoying each other’s company.”

Hopefully, Milly can now live peacefully for the rest of her life in a safe environment, alongside her other half.