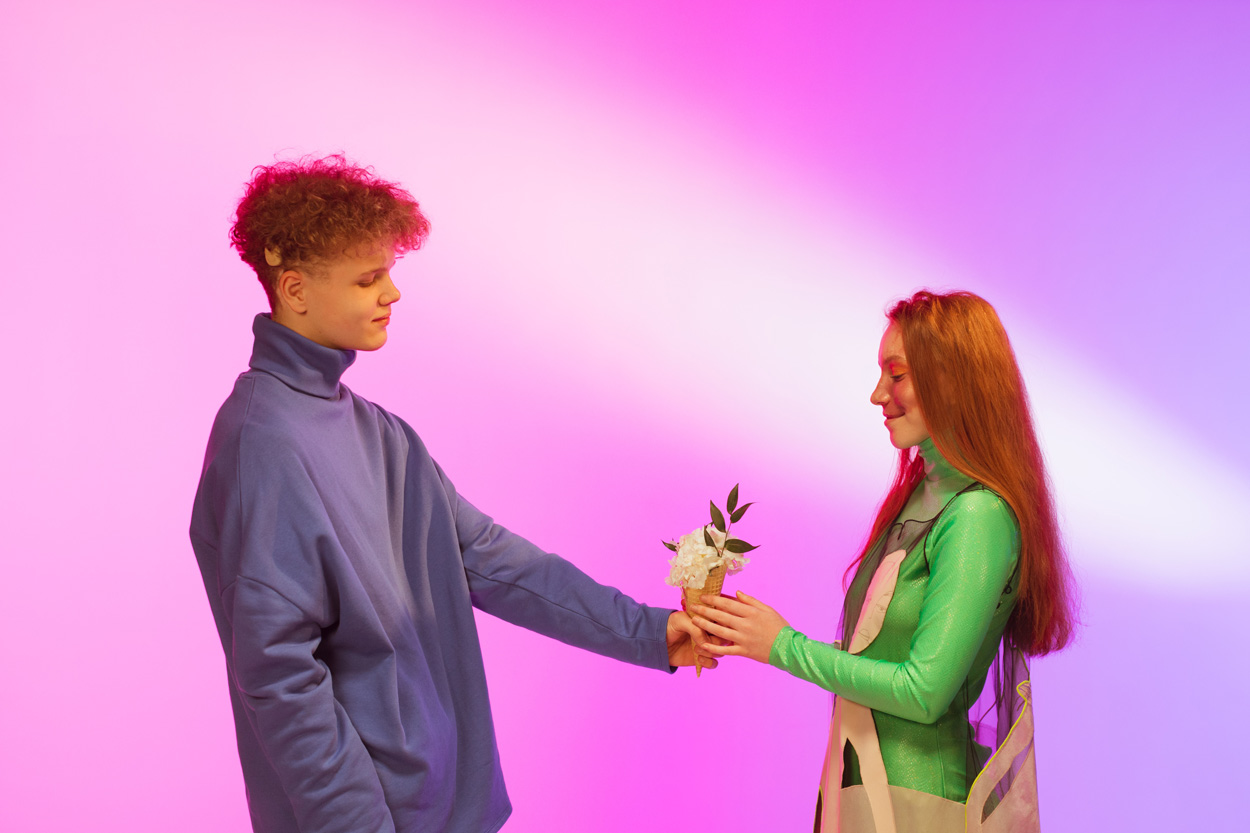 From opening up a cafe and wine bar to encourage in-person meetups following the countless COVID-19 lockdowns that kept us indoors and online during the last two years to playing a crucial part in the fight towards criminalising cyberflashing in the UK, it’s no surprise why Bumble is often seen as a pioneer in the dating app market. After all, its very own concept—having women make the first move—shook the industry when Bumble first launched in 2014.

It seems like 2022 is no different, as the dating app has now announced that it is looking to introduce its users to a new way of connecting with each other—speed dating is back in, peeps. As first reported by TechCrunch, the company has been “quietly testing a speed-dating feature in its UK market, which allows users to join the app on a designated night and time to engage in brief chats with other members before they’ve seen their photo or matched.”

If the date goes well, then both parties can choose to match in order to keep the conversation going. If not, easy-peasy, they can just pretend like it never happened.

Though Bumble wouldn’t confirm the details of the new service when TechCrunch reached out, it did note that it had a product announcement pending. “At Bumble, we are always testing new and different ways for our community to connect,” a spokesperson further told Gizmodo. “Like all tests, we will collect feedback before deciding if we roll it out more widely.”

The potential introduction of this speed dating feature follows a number of attempts by rival dating platforms to incorporate similar options into their own offerings—given how more and more users have started showing signs of fatigue with the standard swiping alternative.

So far, some of these efforts have fared better than others. Dating app Tinder’s parent Match Group, for example, leveraged technology from its acquisition of Hyperconnect to integrate audio and video technologies into its various brands including Meetic, Match and Japan-based Pairs, such as blind date-style features.

Tinder itself also launched a blind date feature involving in-app chats as well as a ‘Fast Chat’ feature for connecting before matching as part of its larger social platform, Tinder Explore. Even Facebook wanted a piece of the action when it tested a video speed dating service called Sparked back in 2021. The side project was eventually shut down in 2022 after it failed to gain traction.

According to data from product intelligence firm Watchful, Bumble’s new feature has been trialled on Thursdays at 7pm in the UK. Marketed as a game that allows users to ‘finally’ leave the app for good, it allegedly starts when Bumble users see a ‘Live’ icon appear in the app.

First, the players have to accept a set of dating rules—like “keep it respectful” and “don’t ask about their looks”—before they’re able to enter. They can then chat with other participants for three minutes before they’re shown each other’s photos. After the time is up, the players can decide to match and continue to a private chat.

Bumble has also recently been spotted testing a number of other social networking-inspired features within a platform called Hive, as part of the revamp of its BFF friend-finding platform, including video calls, polls and chats—a move that could be interpreted as yet another sign that younger users (namely, gen Z) are turning to social media apps to both socialise and meet potential partners, therefore cutting into traditional dating apps’ core audience.

So you’re on your dream trip to Greece and you’ve just checked into your hotel overlooking the Acropolis of Athens. It’s only fair that you click a meta mirror selfie to update your Instagram followers at this point. But wait, is that a third leg I see popping into the frame from a dim-lit corner? You then click a blurry snap of you petting stray cats as the rite of passage in Santorini. Hold up, is that an under-moisturised elbow on the table again? “Girl, just who are you on this trip with?” reads an urgent reply to your Story.

Your Instagram goes on to feature a suspicious second set of luggage as the mystery companion is seen dining across the table and even flexing cringey couple tees in faceless photos. Now your followers are super invested in your alleged boo. Nobody’s focusing on the food aesthetically plated in front of you. Instead, they’d sell their souls to know if you’re officially off the market or not.

Introducing the incognito little world of ‘soft launching’. Or as I like to call it, borderline-gaslighting your followers to doubt their own love lives as you bask in romance without consequences.

What is soft launching?

To truly understand the concept of soft launching in the dating sphere, it’s essential to look back to the term’s origins in… marketing and advertising. In business, a soft launch (also known as a soft opening) is a preview release of a product or service to a limited audience before it’s introduced to the general public—majorly with the intent of gathering data or gauging customer feedback before its grand kick-off.

Here, soft launch also refers to the gradual release of a product in stages which, in turn, slowly helps develop the merchandise into an offering optimised for the market.

Soft launching a romantic partner across social media platforms works on similar pillars. For instance, a restaurant may host a soft launch before its official opening to understand accounting and ensure if they’re sufficiently stocked. A video game may be soft launched to analyse any glitches with a preview audience. And a boyfriend may be soft launched to know the first impression of your social media circle before you truly solidify your relationship.

The concept essentially involves uploading sneak peeks of your partner in the most cryptic way possible—be it via non-descriptive photo dumps or blink-and-you’ll-miss-it cutout collages. Oh, and tagging their username in your photos is an absolute no-no. Sure, you can ghost tag them on your Instagram Stories but anything more would be a dealbreaker in the initial stages of your relationship PR.

If you’re still finding it hard to grasp the term, think about the time Kourtney Kardashian first announced her relationship with Travis Barker by posting a caption-less and tag-less picture of their intertwined hands on Instagram. Mysterious.

The hard launch of soft launch

Soft launch first evolved from a corporate jargon to a dating term when Shiva Baby and Bodies Bodies Bodies star Rachel Anne Sennott debuted the word on Twitter back in July 2020. “Congrats on the instagram soft launch of ur boyfriend (pic on story, elbow and side profile only),” Sennott tweeted at the time, which has since garnered over 127,000 likes.

Just like that, everyone had a new phrase to describe the awkward ‘talking phase’ of their dating lives—you know, the one where your relationship hasn’t hit the commitment level of a full face reveal and you’re wondering what others think about your way forward.

Given the rise of documenting our lives in snippets online, it’s no surprise to see soft launches gripping our feeds like mini Easter eggs even in 2022. With 27.2 million views on the hashtag, TikTok is swamped with tutorials on “cute ways to soft launch your relationship” on apps like BeReal as users dish caption ideas and even twist the trend into the perfect way to trigger your toxic ex. But that’s just the tip of the iceberg.

Today, you can soft launch everything in your life from tattoos, breakups and divorces to your sexuality and even your personality to co-workers. The concept also comes as a huge contrast to the early 2010s, when relationships were all about hard launching your boo by going ‘Facebook official’ and updating your profile status to “in a relationship”—with full face and body shots to match.

What is soft launch September?

All hail! It’s September and we’re finally inching closer to the colder months of the year. As pumpkin spice latte and UGGs once again dominate internet and meme culture alike, September also brings the nosebleed section of the cuffing season back into mainstream conversation.

While August is considered to be the ‘scouting’ phase in the cuffing season schedule, September is all about ‘drafting’ your potential partner before entering the ‘tryout’ stage in October—as singles increasingly desire to be tied down in serious relationships. And what better way to subtly draft your match than soft launching them on social media?

This is why the transitional month is dubbed as ‘soft launch September’. Well, also majorly because the two terms rhyme, like in the case of ‘No Nut November’ and ‘Jack it January’. In the dating sphere, September is hence a hallmark month for building suspense around your would-be partner, all the while ensuring their privacy and indulging yourselves in the gleeful phase.

So what are you waiting for? If you’ve been looking for a sign to debut your match on Instagram, this is it. Start with a cryptic Story and work your way into a photo dump carousel that lasts more than just 24 hours on your profile. Sure, some of your followers might just eye-roll-and-scroll through your soft launch strategies but others may be more invested in your relationship than TikTok once was with the dude building an eel farm in his backyard.

At the end of the day, know that even if your soft launch doesn’t actually land, you don’t have any solid evidence to prove you were in a serious relationship anyways. There’s no username for others to stalk and no face that will continue to live in your followers’ memories even after you move on. The best part? You can continue teasing your social media circle with snippets of your beau without an actual reveal forever—as long as it’s a mutual decision taken together with your partner, that is.