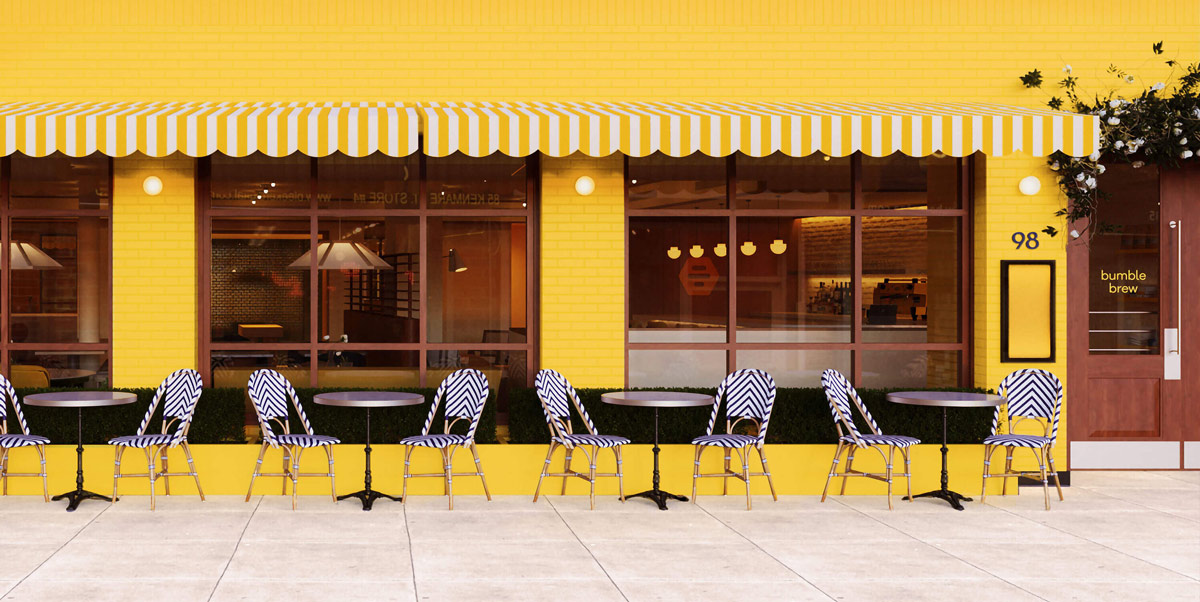 First dates can be tricky. During the pandemic, the virtual experience has been synonymous with clean torsos and aesthetic Zoom backgrounds. As the world slowly reopens, however, certain dating norms are being reinstated—including the endless discussions about places to eat and things to do. So, if you are a New Yorker with a match and a 500-day socialising itch, dating app Bumble has a little hive in the making just for you.

Teaming up with Pasquale Jones, the Italian power-dining room from Delicious Hospitality Group, Bumble has curated Bumble Brew—an all-day cafe and breakfast spot that transforms into a wine bar and restaurant by night. Designed by Float Studio, the 3,760 square-foot cafe and wine bar will be located next to Pasquale Jones on Kenmare Street in the Nolita neighbourhood. Decked out in the app’s signature shade of yellow, Bumble Brew will feature an 80-seater dining room, a cocktail bar and a patio along with a private dining space.

According to a press release from the company, the restaurant will feature an Italian-inspired menu that focuses predominantly on vegetables, handmade pasta and shareable plates. The site will additionally be used for events and the music played will be “a primarily women-based collection from across genres.”

There will also be an ambitious coffee program, according to Ryan Hardy, chef and co-owner of Pasquale Jones, who will oversee dining at Bumble Brew. Plates will average for around $20 along with a large selection of bottles and wines from small producers in Burgundy and Eastern Europe. Food deliveries will alternatively be available through Caviar.

Although Bumble Brew was expected to open in SoHo back in 2019, permit issues and the pandemic delayed its initial launch. The cafe and wine bar was originally focused on “date-friendly” food meant for sharing. The menu, therefore, had no sauce-laden burgers or any dishes that had the potential for ‘embarrassment’ at the table. “No spaghetti—nothing that would be awkward on a first date,” said Caroline Ellis Roche, Bumble’s chief of staff to Bloomberg in 2019.

Fast-forwarding two years, however, these concepts have changed. The cafe has now been reconceived as a “safe space for healthy and equitable relationships and connections.” Bumble is thereby striving to provide a fun and laid-back environment for customers in need of a casual place to meet up in person and converse freely with each other.

“At Bumble, we’re fueled by bringing people together to build genuine connections—both on and off the app,” Julia Smith, head of brand partnerships at Bumble, said in the press release. “We hope that people can gather at Bumble Brew and connect over an espresso or delicious meal, whether it’s with friends, a potential partner or a new business connection.”

Bumble Brew is not the dating app’s first brick-and-mortar debut either. The company has previously hosted pop-ups in New York, London, Los Angeles and Toronto. The temporary spaces allowed people to attend panels and indulge in other complimentary offerings like makeup touch-ups. This new venture builds on the resounding response Bumble has received to the pop-up community spaces to be the first permanent location and storefront for the company.

With more than 90 per cent of Bumble users admitting that they’re ready to date in real life again, Bumble Brew effectively caters to a growing appetite among daters. The venue’s hospitality also aligns with the social needs of gen Zers who are craving for physical spaces and experiences that bring digital connections to life. Although the cafe and wine bar was set to launch on 24 July 2021 for breakfast, then for lunch on 31 July and dinner on 7 Aug, the plans have been further delayed “to address unexpected construction elements.”

Bumble Brew also doesn’t have a direct tie-in with the dating app yet. But it’s easy to imagine Bumble listing the cafe and wine bar on the app while users are busy arranging their first dates. In the end, first dates are all about keeping the good food and good conversations flowing. 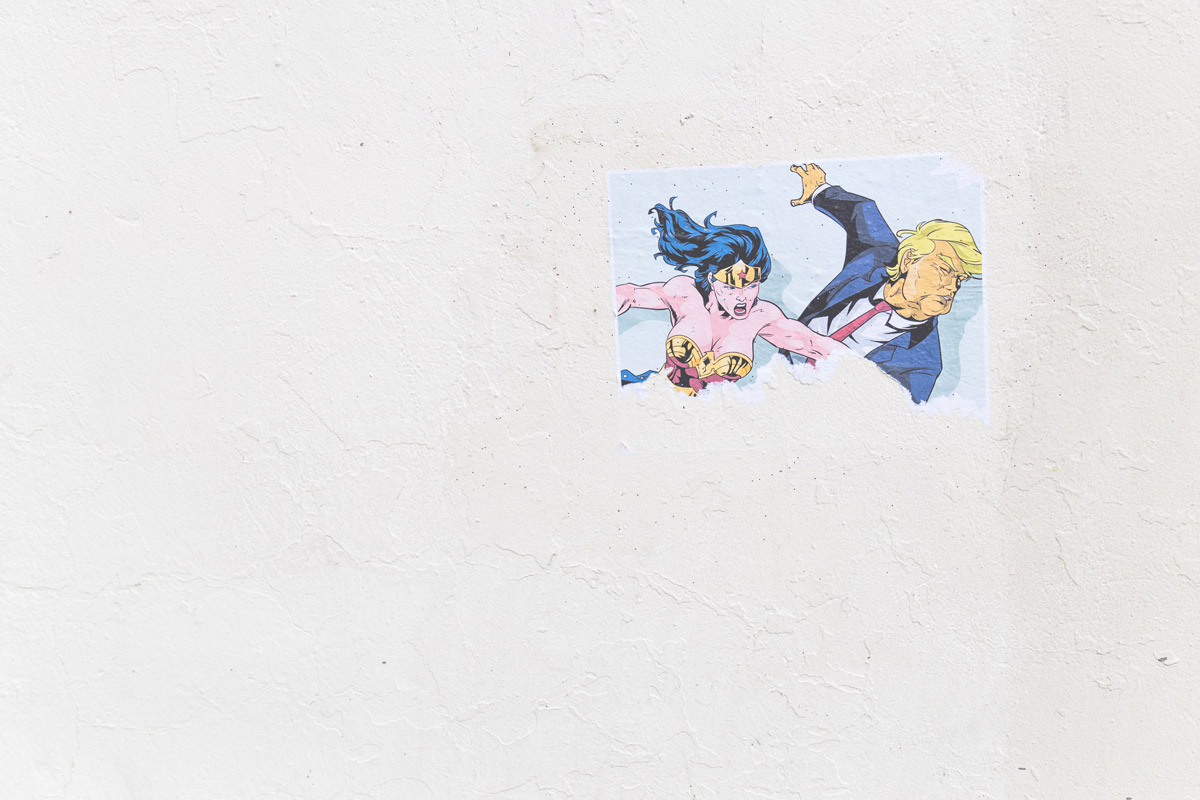 Shortly after Trump supporters stormed Capitol Hill on 6 January, 2021, multiple women decided to take the matter of finding those responsible for this attack on US democracy and holding them accountable in their own hands. Using the notorious dating app Bumble, they ‘lured’ in unsuspecting rioters before turning them over to the FBI.

This particular showcase of resourcefulness seems perfectly tailored to Bumble’s tagline ‘where women make the first move’. But where did this idea come from and how exactly did those women manage to trick rioters into confessing?

It all started when one Bumble user posted on Twitter that she knew someone who’d changed her political preference on Bumble to ‘conservative’ in order to obtain pictures and videos of rioters inside the Capitol.

The tweets quickly went viral on Twitter, which led more women to change their political preferences in order to catch the Trump supporters who took part in the Capitol riots. In response, Bumble initially issued a statement on 12 January, saying it had “taken action on accounts that have violated policy.”  It also said it was “monitoring activity and will remove any users that have been confirmed as participants in the attack of the U.S. Capitol.”

This statement highlighted that the dating app wasn’t wholly supportive of the women’s efforts to aid law enforcement. On 14 January, Bumble issued another statement, saying that it had “temporarily removed” its “politics filter to prevent misuse.”

This led many women to criticise the move.

Law&Crime assumed that the dating app’s reluctance to take part in the fallout from the Capitol riots was connected to its recent filing to go public. “Bumble, Inc., which also owns European dating site Badoo, boasted 2.4 million paying users as of September 2020 and reported $417 million in revenue in the first nine months of 2020. The company was founded in 2014 by Whitney Wolfe Herd and Russian billionaire Andrey Andreev. Wolfe Herd previously settled a sexual harassment case with Tinder, her former employer.”

When questioned about its motivation for removing the politics filter, Bumble told SFGATE that “Where our AI technology flags photos, hate symbols or text content that promotes the insurrection or related activities, those are removed, with repeated offences or more extreme content resulting in a user being banned.”

Understandably, there was wide public condemnation for Bumble’s decision to remove the filter.

Shortly after, on 16 January, the filter was back up.

The company turned the politics filter back on in the US and said in a statement issued to Business Insider that it will be monitoring activity through the inauguration, which the FBI has said may be the target of further armed protests.

“Our team has an increased focus on the DC area and across the United States and are closely monitoring all activity now and through inauguration. Where our AI technology flags photos, hate symbols or text content that promotes the insurrection or related activities, those are removed, with repeated offenses or more extreme content resulting in a user being banned,” the statement read.

Since the attack on the Capitol, the FBI has been asking the public for “tips and digital media depicting rioting and violence” in and around the complex. As of Wednesday, 13 January, just over 100 people had been arrested.

As the FBI continues to investigate the insurrection on 6 January, it will surely be following more leads coming from the dating app.