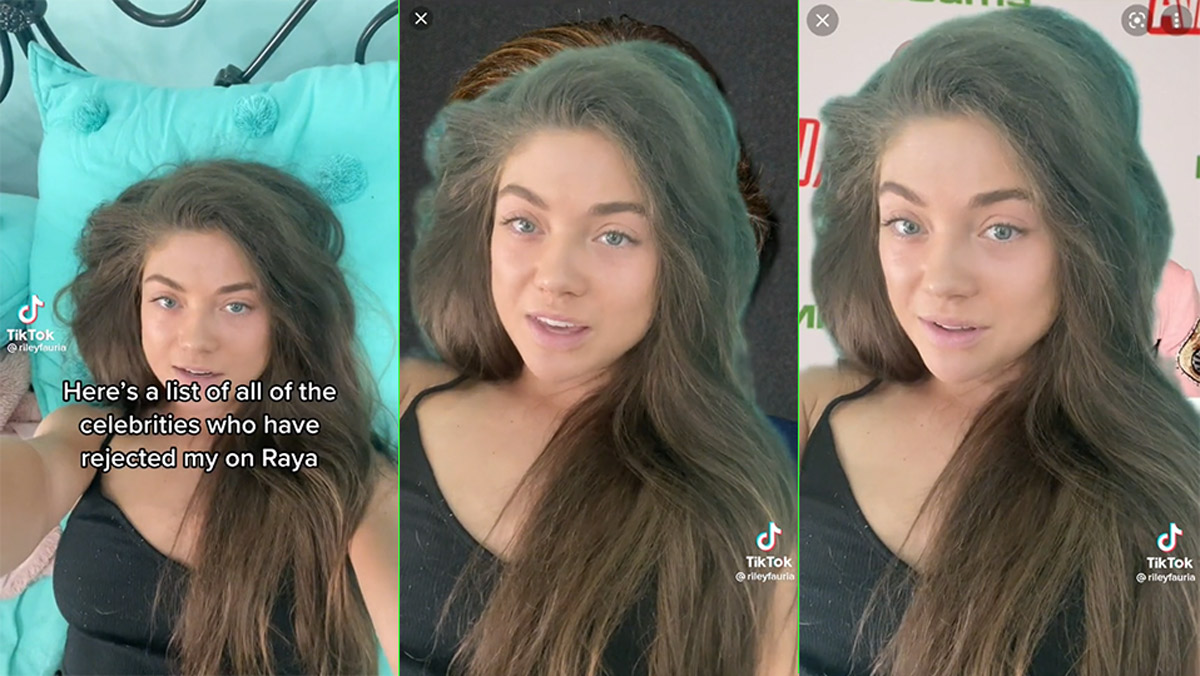 In a now-viral series of videos posted on TikTok, Riley Fauria shared the names of the male celebrities who have rejected her on the dating app Raya. For those who aren’t familiar with the platform, and although it defines itself as a “membership-based community for people all over the world to connect and collaborate,” Raya is widely said to be mostly used as a dating app by celebrities.

Unlike other popular online dating spaces like Bumble or Tinder, this celeb-focused app requires interested users to submit an application. “Once submitted, applications are placed in queue and reviewed continually,” the platform’s description in the App Store reads. “An applicant’s status can change from ‘waitlisted’ to ‘accepted’ at any time,” it continues.

In May 2021, Raya made headlines after a woman, Nivine Jay, claimed that Ben Affleck sent her a video after she unmatched him on the platform. At the time, Jay uploaded a TikTok of what she alleged was a video of Affleck jokingly upset with the fact he had been curved.

“Thinking of the time I matched with Ben Affleck on Raya and thought it was fake, so I unmatched him and he sent me a video on Instagram,” she captioned the video, which showed a man who resembles Affleck asking her: “Nivine, why did you unmatch me? It’s me.”

While the authenticity of the video was never confirmed, the TikTok led to a prompt increase in interest in Raya.

But back to Fauria, who only shared her videos recently. Before we go into the list of celebrities she claims to have rejected her on the dating app, it should also be noted that the TikTok user has confirmed that a recommendation may help you get approved on Raya.

In the first video she ever posted, Fauria named actors David Spade, Chris Rock, Ethan Cutkosky and Drew Starkey as just a few of the men she tried to match with. In the comments section, users shared similar experiences and asked questions about the mysterious platform.

“How do you know if they are real, not fake?” one user asked. Fauria responded, revealing that there is a verification process. “I d[on’t] k[now] why I just feel like everyone has a shot with David Spade,” another commented.

Her third and latest video in the list includes John Mayer, Tom Felton, Zedd, Tyler Cameron and Nick Kroll. “I think I should probably stop doing these,” Fauria shared at the end of the video. “I’m really, really breaking open some old wounds right now.” 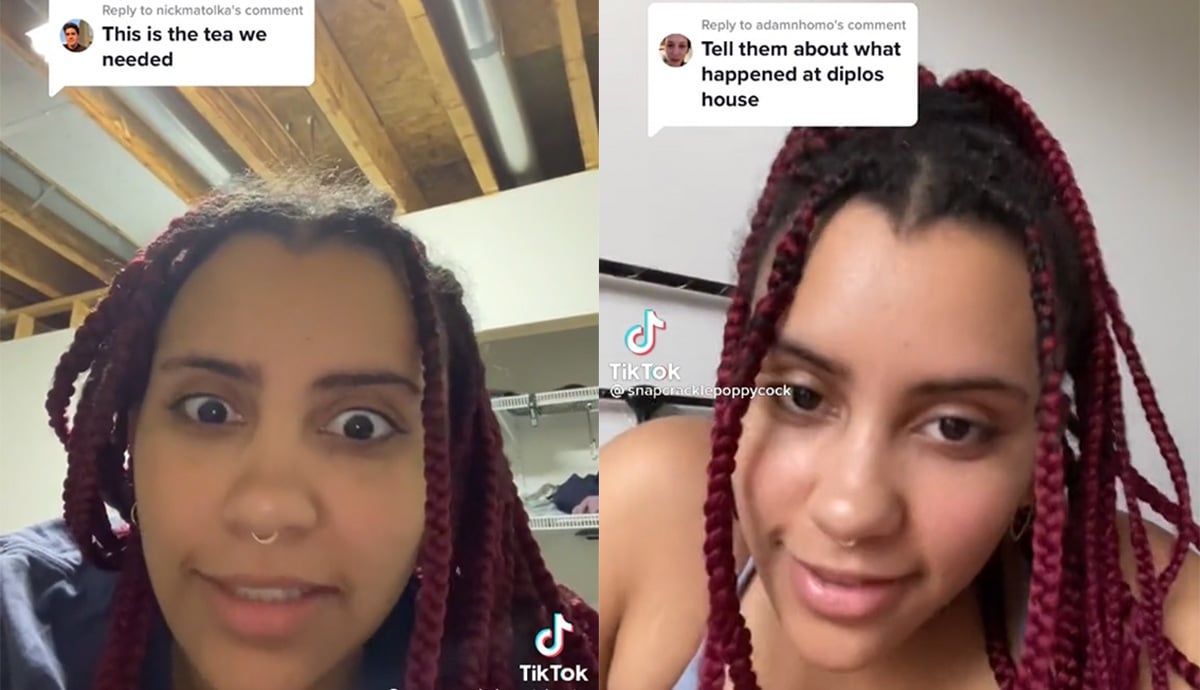 In an initial video posted on TikTok, user @Snapcracklepoppycock, real name Corinne, revealed that since she had been fired from her job as a Hollywood plant lady—which consisted of her going around the houses of celebrities to take care of their plants—she was ready to spill the tea on what she had discovered during her job. Here’s a list of all the secrets she shared with her followers.

According to Corinne, actor Ben Affleck, who got engaged to singer Jennifer Lopez, aka J.Lo, back in 2002 only to postpone their wedding in September 2003 and officially split in January 2004, has a huge painting of both of them above his bed… And yes, they’re in their birthday suits. Lopez confirmed their rekindled relationship by posting a photo of them kissing in July 2021, which might explain the painting, but still—it’s a bit much, no?

In that same video, Corinne also revealed that comedian Jimmy Kimmel doesn’t have any soap in his house’s many bathrooms—suggesting that the host of Jimmy Kimmel Live! isn’t too keen on washing his hands. Not cool, Jimmy.

3. Seth Rogen knows how to take care of his plants

In her first video about her previous job, Corinne mentioned a third celebrity, friendly stoner and Canadian actor Seth Rogen. It’s been said on TikTok that giving what’s left of your bong water to your plants is a good way to keep them happy and healthy. And while Corinne didn’t clarify what she thinks about this trick, she did mention that Rogen definitely uses this watering method. Are we even surprised?

4. Kathy Bates can’t get enough of her dogs

In a second video posted on TikTok following the viral success of her first, Corinne stated that actress and recipient of numerous accolades, including an Academy Award, two Primetime Emmy Awards, and two Golden Globe Awards, Kathy Bates, has 15 Pomeranians! In a later video, Corinne also went on to reveal that Bates is very into astrology and crystals.

5. Matthew McConaughey has more cars than Bates has dogs

“Matthew McConaughey has 20 cars and none of them are Lincolns,” Corinne shared referring to the 2011 movie The Lincoln Lawyer.

6. Chris Evans… is wearing a bodysuit?

Corinne concluded her second video by stating that Chris Evans, mostly known for his role as Marvel’s Captain America, is “wearing a bodysuit.” While it’s not clear exactly what the plant caretaker is referring to here, she might be adding fuel to the rumours that have been circulating about whether Evans used the help of a foam bodysuit to fill out his hero costume while on set.

In a third video posted on the video-sharing platform, Corinne continued spilling the tea—and she didn’t disappoint. According to the TikToker, one time when she was working at Keke Palmer’s house, she saw Danny DeVito there. Why? Who knows, but this match is peculiar to say the least.

8. Bella Thorne is a top client

Corinne shared that when it came to Bella Thorne’s plants, she almost had nothing to do as the controversial actress took great care of them already. What a win-win situation!

9. Charlie Puth needs his plants to be into music too

TikTok favourite and music prodigy Charlie Puth allegedly requested his employees to sing to his plants. Why not?

Corinne had even more stories to share about all the celebrities she’s worked for, here’s everything else you might need to know: