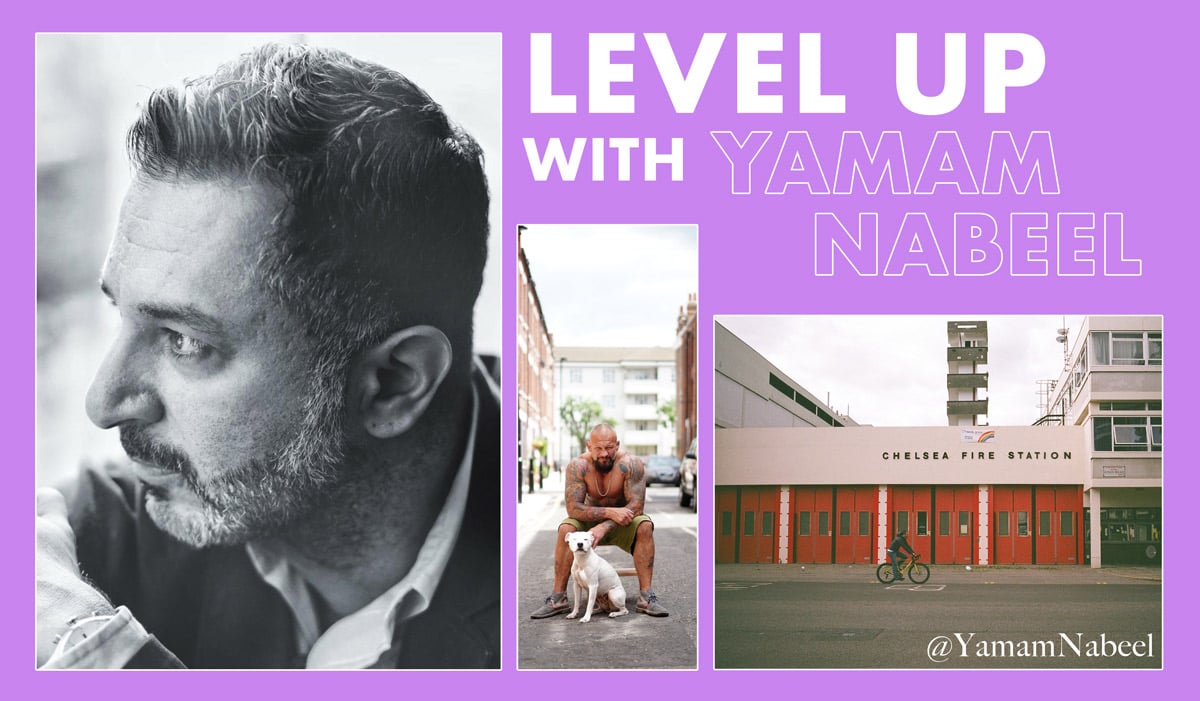 Yamam Nabeel is an Iraqi-born London-based artist and founder of Art Forward Media where his latest virtual exhibition Waiting for Time is being shown. Nabeel’s love of photography began as a child living in exile; born in Baghdad, his father’s anti-regime positions made him an “enemy of the state” and thus his family were forced to flee the country. At four years old in exile, Nabeel travelled the world with his family before settling in Hungary for eleven years. At the age of sixteen, Nabeel moved to England and has been here since. Screen Shot Pro sat down with the artist to talk about the message behind his exhibition, how exile has shaped him as an artist, reality and perception in photography, digital versus analogue and how you can grow as a photographer.

Without knowing a word of English, he began to explore his complicated identity and build a life for himself. To cope with the language barrier, Nabeel began to write short stories that were eventually published in a number of notable publications. He went on to study politics and history at university and later became an accomplished television producer, working for stations like Channel 4, Sky News, CNN, ITN News and MBC. Departing from this work for a period, he created an incredible and successful non-profit football organisation titled FC Unity—aiming to create an educational platform harnessed by the power of football for the development of the youth.

Handing off this work to the younger generation, Nabeel returned to the world of art and photography, co-founding his own London-based multi-media production house—Art Forward Media. Its aim is to create and showcase its own projects as well as platform diverse artists from around the world.

“Art is powerful, it tells us stories we can learn from; let us use it to move forward.”

Nabeel’s Waiting for Time exhibition is currently being showcased on Art Forward Media’s website. Shooting the photos for the project over the past year, Nabeel wanted to explore how “our reality is only a perception, and it might be manipulated beyond our control. What we perceive is often not reality itself. With all available mediums to broadcast information, more often than not, we are fed perceived realities.”

This exploration of “perceived realities” took place over a year of lockdowns. During this time, Nabeel safely travelled between London and Berlin to shoot and interview over 50 diverse participants. Shooting in both black and white analogue photography as well as digital, the photographer set out to create a “subtle critique of our times, questioning how perception—that can be created easily—can override the truth and place us in harm’s way, especially during a deadly pandemic. This is an experiment of reality versus perception, of truth versus propaganda through the lens of an analogue and a digital camera.” So, where did this idea begin?

This fascination and frustration Nabeel had with the concept of perception stemmed from digital media and the role it played in the pandemic. “When social media was created or became widespread, it was giving a voice to the voiceless but, what it has done recently is giving voice to the loudest, the most incoherent and diluted messaging. And it’s, in a way, a mouthpiece for all, from extremists to idiots to racists.” It was the explosion of conspiracy theories and misinformation about the pandemic online during the year—who can forget 2020—that motivated Nabeel to take this journey into reality as a perception.

“There’s a narrative in this country. And if you’re part of that narrative, you can do whatever you want. And I’ve never been part of that narrative.” The wider societal narrative—according to Nabeel—tells us how we should be thinking, what we should be doing and how we should be feeling. “I thought, I want to hear what people say, I want to hear what people feel. And that was the reason for doing the project and while I was doing it, the murder of George Floyd occurred. And it became a much more important project again, the narrative itself and how it’s presented.”

Nabeel wanted to see how people felt about the whole thing. Due to obvious social distancing reasons, the participants were shot from a distance outside their homes. “I used the whole idea of a chair and sitting down, there are no cars on the street. So, let’s sit on the streets. Some of the ones weren’t on the actual street because some of the streets were still busy with deliveries and things like that.” This was Nabeel’s idea of playing with the stay at home rule.

“I asked people all I wanted them to do is bring a chair. So, if you look at the chairs in the images, they’re all the chairs of the people. It wasn’t a chair with me. I didn’t take a chair around. It was their choice what they brought out, I mean, someone brought out a lounge chair. So that’s how I went about it.” They were given no direction on how to sit, the choice was theirs. Simple, yet powerful. That’s how Nabeel recommends tackling a subject matter in your own photography. His philosophy is to let it flow. “I start with a thread, then you start pulling at it and it opens off. For example, I started with a few people around my neighbourhood and then moved to the next one.”

Nabeel shot a wide variety of people, from an intensive care unit consultant doctor to a bus driver—the diversity is incredible. But, how did he find these people? According to Nabeel, it was not pre-planned. “It started off with one or two […] and then people would just recommend another and in the end, it snowballed.” Finding participants is really easy if you ask the right questions, says Nabeel. Often the people you shoot will know of others who would want to do the same—networking and expanding your circle becomes key in finding people for your photographic and artistic work.

Shooting the project on both digital and analogue, Nabeel discussed the differences in these mediums in photography and how they can shape the perception of reality. He argues that although digital photography is more accessible and that it can allow for most people who have phones with cameras to be photographers, it isn’t actually real. “It is analogue photography, which by definition is real, because it’s a film that an image is burned onto when you open the shutter. It’s tangible. Whereas digital is a manipulation of data.”

He argues that people don’t really look at photos anymore—not properly, “We don’t print images, we don’t really spend time looking at those images. We just take them.” And when we do look at these images; they’re often manipulated beyond our understanding. For those budding photographers out there, Nabeel warns of the overuse of editing in your work, “When you go onto social media, all images are altered, from filters to heavy editing and you can put as many filters as you want to but when you do, it loses any relation to reality.” This is why he suggests analogue photography.

The overconsumption of digital imagery can lead to a loss of focus, continues Nabeel. With analogue photography “it makes you stop and think”—especially when it’s black and white. Every film roll has its own personality but Nabeel chose Ilford HP5, “Black and white images captured on film take time to develop. It actually might not be as sharp, it might not be as representative of the actual day it was taken in terms of sunshine, or the weather and the lighting, but it is real.” So, is showing reality or truth necessary to be a photographer?

Nabeel doesn’t actually think of himself as a photographer. He reflected to Screen Shot Pro that first and foremost he saw himself as an artist and that photography was just a medium for his work—a medium to show a specific reality. When asked whether aspiring photographers should portray truth in their work, Nabeel responded by saying it’s important not to overly influence your audience, “In my own work I don’t want to feed them, because that’s what I’m going against—I’m challenging the mainstream narrative.” The mainstream narrative that tells you how to think, feel and behave.

He argues that it doesn’t matter what the subject of your work is, whether it’s people, places, food or animals, “Ultimately as an artist, or as a writer, I have a responsibility to present you with reality. And that is the truth, you know, and in this case, reality against perception.” Nabeel says this responsibility is not something that holds you back as an artist, “Artists shouldn’t judge each other. Everyone can [create] whatever they want. It’s how it’s promoted and how it’s presented to others, that’s where the problem is. It’s whether what I do will not be available to the mainstream because people have an issue with it.”

As a budding photographer myself, that has always been something that has terrified me—what will people think? Nabeel’s advice? “Let people judge. I wanted to create something and just put it out there and see how people reacted. So far? The reaction has been very good.”

Nabeel’s photography on his Instagram profile has attracted over a whopping 100,000 followers—it’s safe to say people like his work. When asked on how he grew his platform, the artist thanked Instagram’s old algorithm. Ah, the good old days. Don’t we all miss it? Starting in 2013, “The algorithm was simple. You post to get likes, people follow, the more likes you get the more people follow you. The timeline was chronological so you knew around what time to post for people to follow.” For Nabeel, it was an organic growth over time.

We are living in an increasingly online world where we showcase our lives, our minds, our bodies and also our work on the internet. Having a presence online seems a must-have for a photographer, right? Not to Nabeel. When asked for advice about how photographers can grow their platform, Nabeel emphasised to not put all your eggs in one basket—that basket being social media. “Create whatever you want to do, do it for your ability, and forget about social media success. Do it in the so-called real world, get your success there, and let social media supplement and support that work.”

He continued by stating that an up and coming photographer needs to have that balance. Having been on social media for 18 years, Nabeel cited that he had seen companies and creatives come and go. He cautioned future aspiring creators of this, “Social media is such a weird thing, you know, something going viral, it’s got nothing to do with actual talent or determination. It’s just an algorithm. People need to be aware that success needs to be tangible, to achieve something.”

Nabeel realised that “this so-called social media reality—which is a parallel universe—can take over from your own reality.” He continued, “I think when you get ‘successful’ on social media people correlate that as real-world success.” Nabeel stated there was a period of time when he wanted to delete social media, “When you’re working, and really working, you don’t have time for social media.” So when you see creatives or people with big platforms that are always on social media—know that a lot of that isn’t real. The real stuff in their lives is not shown, it’s important not to compare yourself to those on social media, Nabeel advises, as this parallel universe is one of great manipulation. This brings us back to reality versus perception again. He’s really on to something. You should definitely check out his exhibition.