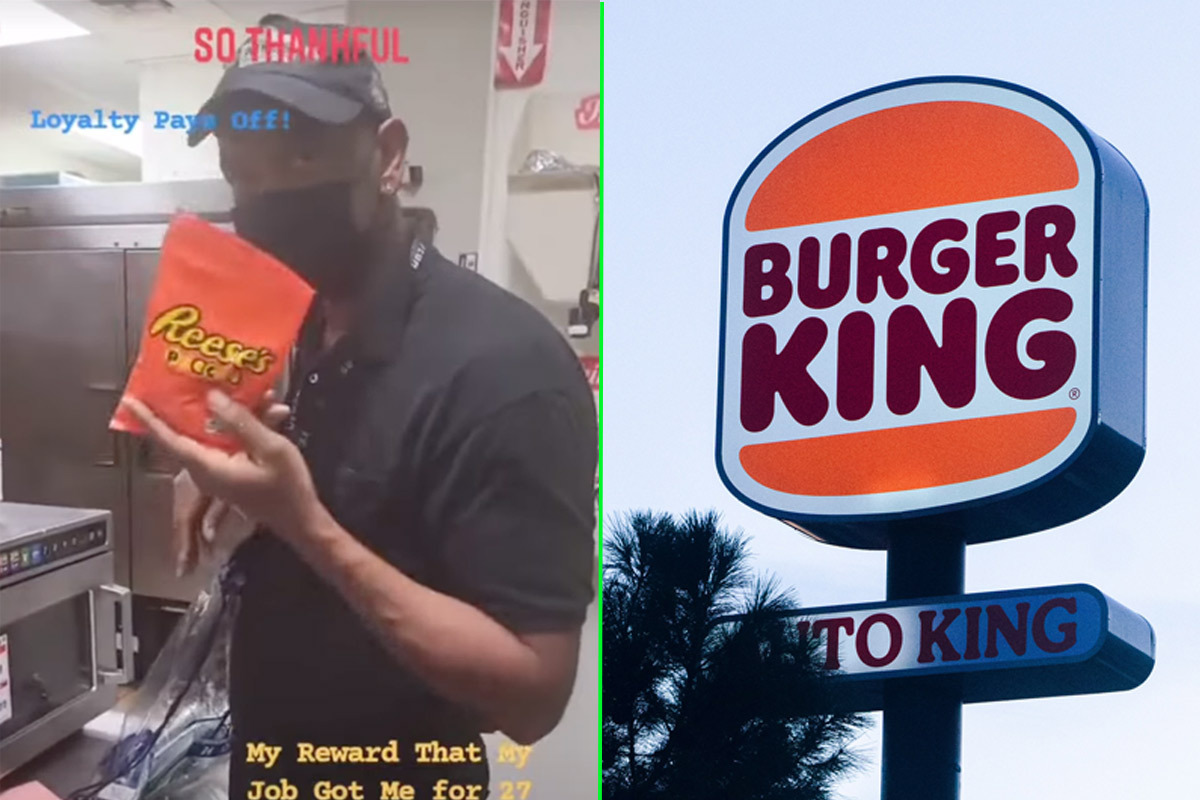 Loyal Burger King employee in tears after raising $150,000 on GoFundMe

54-year-old Kevin Ford, who has been a cook and cashier at the Las Vegas McCarran International Airport branch of Burger King for a whopping 27 years recently went viral after sharing a video of himself receiving a goodie bag as thanks for his loyalty to the fast food giant.

The goodie bag contained things like a bag of Reese’s, a reusable Starbucks cup, two pens and a cinema ticket. Ford’s daughter, outraged, set up a GoFundMe page in support of her father and has subsequently raised over $150,000.

“Hi, My name is Seryna. The man in that video is my father,” the description of the page reads. “He has worked at his job for 27 years and yes, he has never missed a day of work. He originally began working at this job as a single father when he gained custody of me and my older sister 27 years ago. Then as our family grew and he remarried, he continued to work here because of the amazing health insurance that was provided through this employer because it was unionised.”

Seryna then went on to add how it got all four of her siblings through high school and college with full healthcare coverage. “My dad continues to work here, because though he does look young, he is coming up on retirement age and leaving would cost him his retirement. In no way are we asking for money or is he expecting any money but if anyone feels like blessing him he would love to visit his grandchildren.”

Little did Seryna and her father expect this level of reception for their GoFundMe page. “I’ve been crying for three days now,” the loyal employee shared when speaking to NewsNation. “The generosity of these people is just overwhelming,” Ford continued.

90s Saturday Night Live star David Spade also reached out to Ford, donating $5,000 to the GoFundMe page and told him to “keep up the good work.” An incredulous Ford responded to the donation by saying “Holy sh*t dude!!! Cannot believe this!!! THANK YOU SO MUCH For even watching the video! I love you my brother!!! Much love and God bless… I think I might be able to take a day off…”

In an interview with LADbible, Burger King told the publication they had a “robust employee recognition program, which includes the recognition of tenure milestones and monetary awards.”

“The Burger King brand and its many franchisees nationwide are committed to recognising and celebrating the achievements of the thousands of people serving across a wide range of roles—all dedicated to providing our guests a world-class experience,” a spokesperson explained.

“Following a review with this location’s franchisee, we’ve learned that this video depicts a Team Member in receipt of a peer-to-peer reward in recognition of a short-term positive performance/experience,” they continued.

As for Ford, the loyal employee intends to use the money to set up a college fund for his grandchildren and take that day off he most certainly deserves. 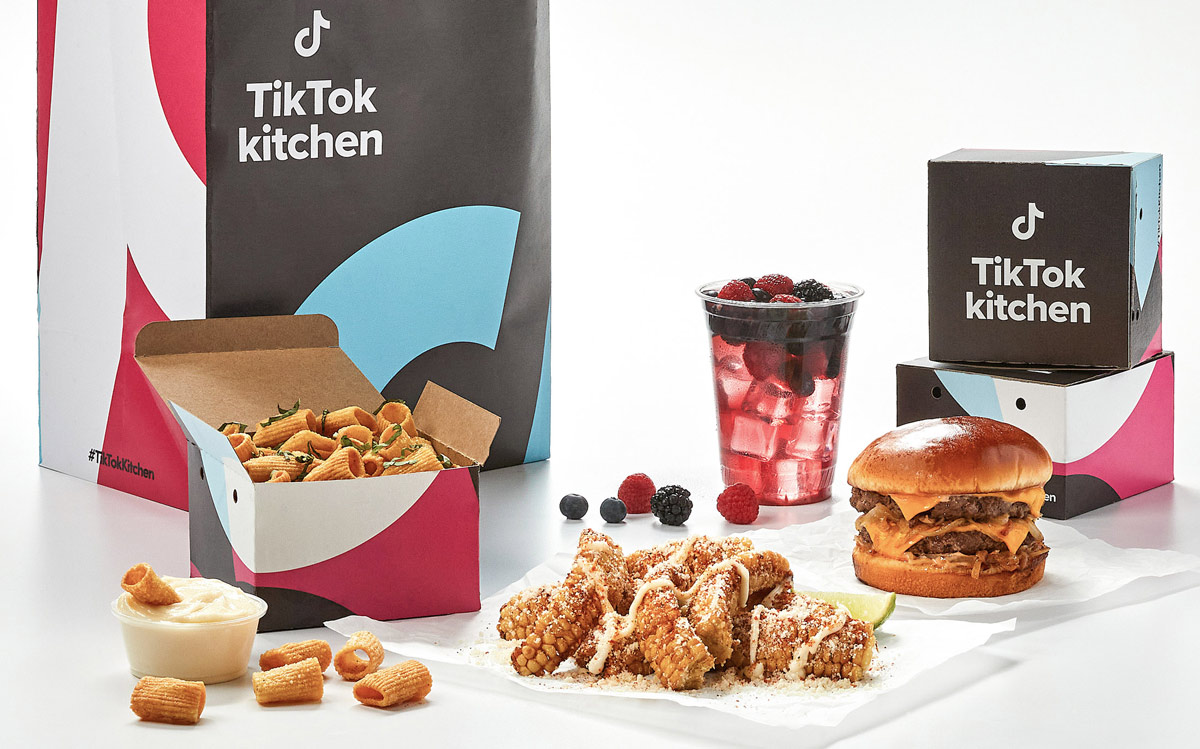 From pasta chips to smash burgers, you’ll soon be able to order your favourite TikTok food for delivery

Remember the state of your kitchen when you tried jumping on the pancake cereal trend? What about your lethal brush with cloud bread and pesto eggs? No? Too lazy to whip up some of the drool-worthy recipes you’ve stumbled across on TikTok? Don’t worry, the platform itself has got you covered as it plans to dip its gen Z toes into the food delivery industry.

Partnering with Virtual Dining Concepts (VDC) and Grubhub, TikTok is launching a delivery-only service that will cook some of the trendiest recipes on the platform for you to order and enjoy. Dubbed ‘TikTok Kitchen’, the menu will be based on viral food trends including baked feta pasta, which was ranked as the most-searched dish of 2021 by Google. The opening menu is also set to feature pasta chips (pasta shapes that are coated with cheese and air-fried), smash burgers and corn ribs (made from coating sections of corn with spices and Parmesan).

According to VDC’s co-founder Robert Earl, the menu will change quarterly to keep up with the dynamic nature of trends on the platform. “If a dish starts going viral, there will probably be opportunities to add it to menus,” he told Bloomberg. With 3.3 billion views and counting on #cloudbread, it remains to be seen whether such ‘evergreen’ food trends will translate into permanent offerings on TikTok Kitchen.

Nevertheless, Earl said the prices for such viral recipes will be “comparable to other Virtual Dining Concept brands.” Founded in 2018, VDC has successfully collaborated with famous clients including Guy Fieri, Steve Harvey, Mariah Carey and Tyga. However, one of the brand’s notable partnerships has been with American YouTuber and philanthropist MrBeast, aka Jimmy Donaldson. According to Bloomberg, MrBeast Burger, the resultant delivery-only fast food chain, has been a breakout hit since its iconic launch in 2020. “MrBeast sold 1 million burgers in three months and there are now 1,500 locations in the US, Canada and the UK,” the publication noted—with prices starting at $6.99 for the burgers.

While TikTok Kitchen’s price range is yet to be announced officially, Earl forecasted its success as on par with MrBeast’s virtual restaurant business. “Look, you have a platform with a billion viewers monthly who are constantly engaged, as the numbers show,” he said. “It’s the first time there’s a brand like this out there—an audience of hundreds of millions of people.”

So how exactly will TikTok Kitchen work and how can we, as consumers, taste-test the latest trends on the platform? Set to launch in March 2022, TikTok Kitchen will operate out of existing restaurants—including US-based chains owned by Earl himself like Buca di Beppo and Bertucci’s. This concept is what’s termed a “ghost kitchen.” But unlike some companies in the said business, VDC’s restaurants are not based out of independent, trailer-converted kitchens in parking lots. Instead, TikTok Kitchen will leverage a restaurant’s existing kitchen and employees who will be provided with the necessary training, food packaging and viral recipes of choice. All deliveries will then be made via Grubhub.

Although 300 locations across the US are planned for its launch in March, TikTok and VDC plan to expand the service to around 1,000 restaurants by the end of 2022.

Which brings us to yet another dilemma when it comes to monetising trends across social media. How does TikTok plan on crediting the creators of these viral recipes? In a press release, the company stated that it plans to devote its profits to the creators and in turn, would support promising culinary talents on the platform altogether. “Creators will be receiving credit for dishes within the menu and will be featured prominently throughout [the] promotion,” TikTok spokesperson Elena Saavedra explained in a statement to The Verge. However, Saavedra also clarified how the service is a “campaign to bring TikTok foods to fans and not a venture into the restaurant business.”

This essentially means that the company perceives TikTok Kitchen as another marketing effort on its part rather than a full-fledged, long-term business. For Earl, on the other hand, the partnership is an investment into TikTok itself. “I’m doing it as a business, TikTok are doing it for the development of that category,” Earl told Bloomberg. Although TikTok Kitchen may not be here to stay, our personal ones can finally take a well-deserved break from all the havoc we wreak in the name of a DIY food trend. For a while, at least.