When did it become lame to wear Converse x Comme des Garçons PLAY?

If you’re not completely sure of what I’m talking about, let me paint you a picture. It’s 2015, you’re still a teen but that doesn’t stop you from already being on the ‘quest of coolness’. You want to impress—who exactly, I’m still not sure—and your best shot at doing that is by buying the trendiest kicks in town. At least, this hasn’t changed, things have just gone even crazier than before.

But back to 2015; you’re going through your options and two choices stand out from the crowd—which is ironic because soon enough, the whole ‘crowd’ will be wearing them. Pharrell x adidas Originals Stan Smith or Converse x Comme des Garçons PLAY? You decide to go for the second option, because you consider yourself slightly cooler and ‘edgier’ than a Stan Smith wearer. And you are, at the time—cool that is, not edgy. So what happened between then and now for the iconic Converse collaboration to fall from grace this violently?

First of all, let me just say that if you were one of those people I’ve described above, I’m not judging you one bit. I had a pair of Converse x CDG too—I even had a few t-shirts and a cardigan that I still wear to this day. The only difference is that the cool factor of this collab has completely disappeared. Take Travis Scott for example, who recently posted a few pictures of him wearing a pair on Instagram.

As one of the most influential celebrities among the hypebeast community, the rapper still got some serious shit for wearing what everyone now deems the most mainstream pair of trainers ever. Comments ranged from “Oh my god why would you wear those…” and “Man has millions of dollars and still dresses like a high school sophomore” to “CDG 📈📈📈📈” and “watch everybody about to go get cdg chucks again.”

As of now—let’s not underestimate the powerful cycle of fashion trends—Scott himself failed to make the Chuck 70 x CDG acceptable again. The question deserved to be asked, however, and Highsnobiety has even dedicated an entire article to it, literally titled Could Travis Scott exonerate the CDG Play x Converse Chuck 70?

While we await the pair’s potential rise from the ashes, here’s more on what really went wrong for the collab.

When did it become lame to wear Converse x CDG PLAY?

In 2009, Comme des Garçons (CDG) joined forces for the first time with Converse, marking the legendary model of the Chuck Taylor with the heart and its big eyes, logo of PLAY, the streetwear line of the Japanese fashion label. At the time, CDG designers stripped the Chuck Taylor of its visible seams, giving the shoe a clean and minimalist look.

The collaboration was a big success. In 2015, Converse and CDG joined forces again and this time presented a model of Chuck 70 stamped with the red heart. The pair sparked an impressive infatuation, and soon found themselves at everyone’s feet. In fact, it was such a success that Sneaker Freaker named it the “decade’s most influential sneaker.”

Sadly, like all fashion pieces adopted by the general public, the Chuck 70 x CDG ended up getting rejected by some picky consumers who considered that the model had become too mainstream. Like Stan Smith wearers, people who still sport a pair of Converse x CDG on their feet are seen by many as follower sheep who lack taste.

Today, the Chuck 70 x CDG is the subject of debate among style aficionados. If a handful of consumers welcome restocks and the arrival of new colours with enthusiasm, others judge the people who wear them.

On 1 June 2021, Hypebeast announced on Instagram the release of new colours of Converse’s legendary collaboration. The model is now also available in blue and grey. It goes without saying that the pair has lost its exclusivity factor, but should it not be remembered as a pop culture symbol of the second half of the 2010s nonetheless? And you know what happens to iconic pieces—they always make a comeback. 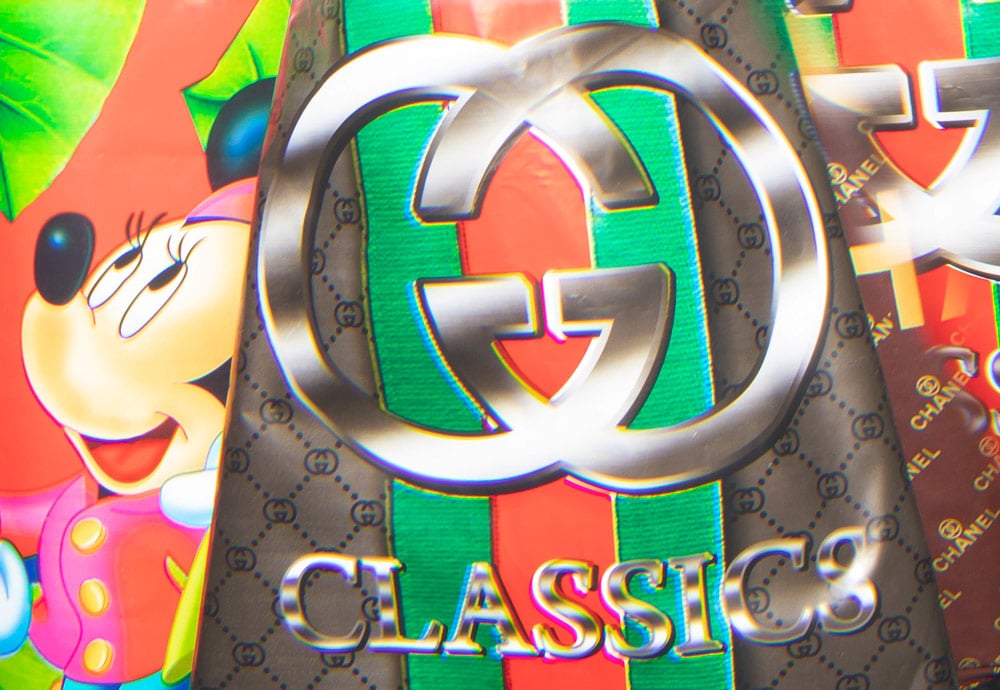 Meet the hypebeasts that only buy the best knock-offs

Supreme, Off-White, Balenciaga, Palace, Nike—I could go on and on naming so many brands that have now become most known for their die-hard fans; hypebeasts. A hypebeast is defined by the slang dictionary as “someone who follows trends in fashion, particularly streetwear, for the purpose of making a social statement.” Originally introduced as a derogatory term, it is now a common way of describing this new kind of fashionista.

For most new gens, it’s all about wearing the latest garms, the latest collab—to cop or not? Whatever that means. But when you try to live up to the hype of the term ‘hypebeast’, especially when you’re a teenager, your budget can easily be spent on one pair of trainers. That’s where replicas come in to save the day. Also known as knock-offs or fakes, replicas have become another big part of the fashion industry, one that, until now, was taboo.

FashionReps is the subreddit that might change the way we perceive knock-offs. With 313k ‘RepFam’ worldwide (or members), the community based on the discussion of the replica culture and where to find the best fakes is big, to say the least. The forum contains everything you need to know before buying fakes, from a how-to guide on where to order replicas from, to members sharing videos and pictures of their latest purchases and how legit they look.

So, okay, going online to create a community around knock-offs is not that groundbreaking, but the fact that some of the FashionReps members are actually proud to say it out loud is something new. Screen Shot spoke to Quentin Caruso, one member of the subreddit also known as Tripping on Instagram and YouTube, about the perfect replicas and why there shouldn’t be any shame buying and wearing them.

“Replicas have gone a long way. With almost any products being released by a streetwear or designer brand, there will also be a spot-on replica out on the market about 4 months after. For example, Supreme released Bandana Box Logo hoodies at the beginning of December, and there are already near-perfect replicas out now. This doesn’t just stop with Supreme, Gucci, Louis Vuitton, and Balenciaga replicas will all be replicated to near perfection,” tells us Tripping.

In November 2019, Tripping posted a video on YouTube where he talked about his experience telling his fashion class he owns many fakes. According to Tripping, when he revealed that, his teacher asked him how that made him feel. “I’m fine with it,” he answered—and why shouldn’t he? Well, that’s where the catch is. As much as being honest about not spending ludicrous amounts of money on clothes and taking pride in it should be celebrated, replicas also come with problems of their own.

Counterfeit fashion is an industry that has to operate secretly because, obviously, it is illegal. This means that there’s a complete lack of transparency about the workers making those knock-offs. Are they being paid enough? Probably not. Are they working under good conditions? Most definitely not. Counterfeit fashion also contributes to climate change by using non-sustainable fabrics, but then again, so does Nike and other big fashion brands.

Talking about climate change, Tripping shares that “I’ve never put much thought about climate change when I buy clothes, be that replicas or not. I feel like there are bigger factors that affect climate change.” This is a contrasting answer to the one that Ariele Elia, an assistant curator at the Museum at FIT explained in a Complex documentary about the flourishing bootleg industry, where she said, “One of the worst stories I read was where they had raided an illegal factory and the children were actually handcuffed to the sewing machines.” In other words, yes, there are bigger factors that affect our environment, but counterfeit fashion still plays a big part in climate change.

Climate change and working conditions aside, the question is still here. Why are people buying replicas, and why are they more honest about it? It’s all about keeping your money, even when you’ve just missed the latest drop. “Replicas are cheaper but the same quality. There should be no shame in wearing replicas, people wear them to express their style without spending hundreds on one piece. The replica market and community is growing and growing with many people wanting to buy them. It is only going to get bigger over time,” predicts Tripping.

Whether his prediction will come true or not, we can’t be sure just yet, but the future of counterfeit looks bright. In the meantime, there’s one point everyone will agree on: people who sell replicas as authentics are the worst.