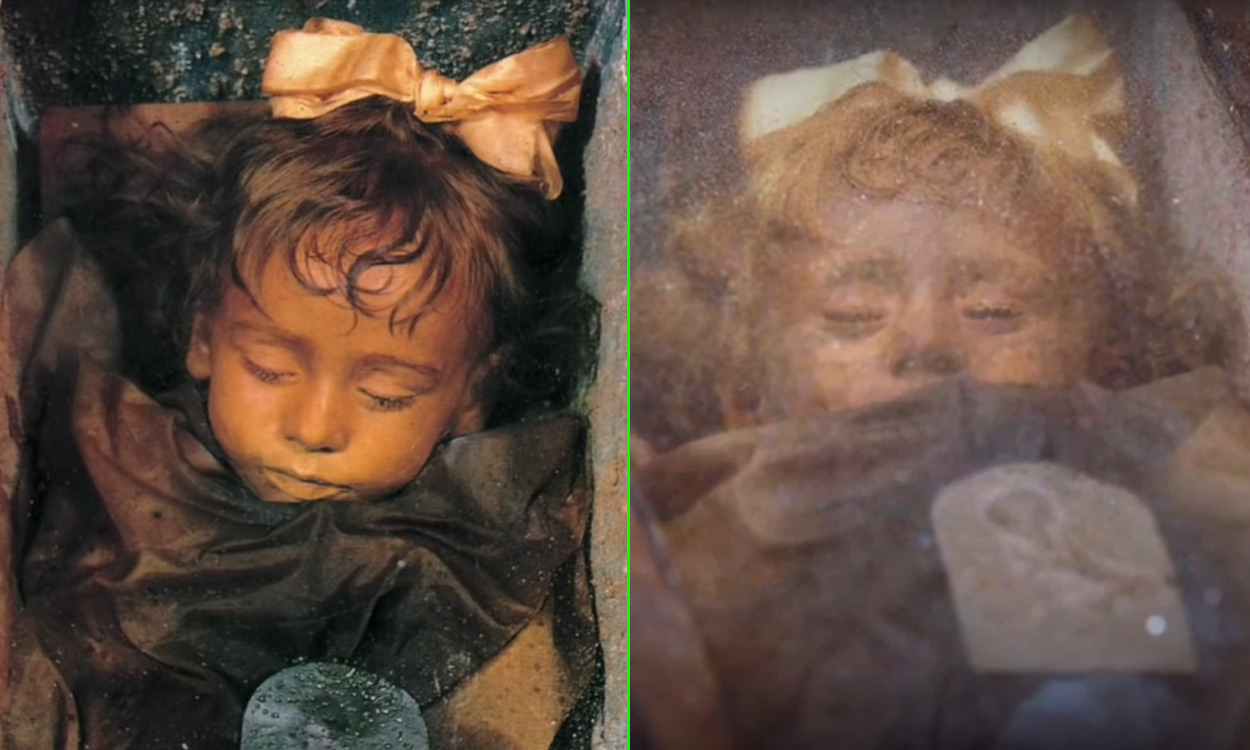 In the depths of the Capuchin catacombs of Palermo, Sicily, lies the body of a two-year-old girl called Rosalia Lombardo—who tragically passed away due to pneumonia caused by the Spanish Flu on 6 December 1920. At the time, her father approached an embalmer and taxidermist named Alfredo Salafia so that he could preserve his child in a glass-topped coffin.

Today, over a century later, Lombardo’s mummified body lies intact with all her internal organs. Her skin still appears smooth as her hair remains tied back with a large silk bow on the top of her head. And, perhaps more hauntingly, Lombardo’s crystal blue irises are visible under her blonde eyelashes—making her seem like a child who is merely napping and could awake at any moment.

Resting on a wooden pedestal among 8,000 other mummies, thousands of people come to visit the two-year-old’s preserved body in the catacombs underneath the Capuchin convent. Her frame is covered with a blanket, leaving only her face visible to the crowd. Lombardo is now nicknamed the “sleeping beauty of Palermo” and is often described as being “the most beautiful mummy in the world.”

Over the years, a number of bizarre theories have emerged about Lombardo’s remains, with some even claiming that her body is a fake wax replica. Several tests have since been reportedly performed for a History Channel documentary in the 2000s looking to debunk these statements. Not only did the MRI scans, X-rays and 3D images confirm the mummy to be the body of Lombardo, researchers even discovered that her skeletal structure and internal organs were still intact—including her brain, which had shrunk to 50 per cent of its original size.

However, there was one urban legend that continued to haunt visitors: many people have reported witnessing the young girl slowly open and close her eyes, in turn, earning her the title of “blinking mummy.” Several time-lapse videos featuring images of Lombardo’s body taken hours apart also went on to grip the broader internet—where she appeared to have opened her eyes by a fraction of an inch.

While some believed supernatural forces were at work, enabling the two-year-old’s mummified body to blink, others claimed this was due to the temperature changes inside the catacomb which compelled her eyelids to contract and produce the blink-like effect.

But it wasn’t until 2009, when Italian paleopathologist Dario Piombino-Mascali came aboard and debunked the mystery that the internet rested Lombardo’s unusual case. “It’s an optical illusion produced by the light that filters through the side windows, which during the day is subject to change,” the expert said in a statement, as noted by ScienceAlert.

Piombino-Mascali made this discovery when he noticed that workers at the museum had moved the mummy’s case, which caused her to shift slightly and allowed him to see her eyelids better than ever before. “They are not completely closed, and indeed they have never been,” he went on to state. In short, when the light changes and hits her eyes at different angles, it can appear as though the eyes are opening and closing.

By tracking down the embalmer’s living relatives, the paleopathologist also managed to uncover the elusive formula that was used for Lombardo’s noteworthy preservation. After going through several documents obtained from Alfredo Salafia’s family, Piombino-Mascali stumbled upon a handwritten memoir in which the embalmer had recorded the chemicals he injected into the two-year-old’s body.

Now, typical embalming procedures include the complete removal of organs. The empty body is then filled with natron salts, which help desiccate the remains. But Salafia did something different. In his memoir, he detailed that he had made a small puncture wound and injected a mixture of formalin, zinc salts, alcohol, salicylic acid, and glycerin into Lombardo’s body following her death.

While formalin—which is now used by embalmers worldwide—helped eliminate bacteria, salicylic acid removed any fungi present in the flesh and glycerin prevented the young girl’s body from drying out. But according to Melissa Johnson Williams, executive director of the American Society of Embalmers, zinc salts was the magical element that is responsible for Lombardo’s preservation.

“Zinc gave her rigidity,” Williams told National Geographic. “You could take her out of the casket, prop her up, and she would stand by herself.”

Today, Lombardo is housed in a new glass case filled with nitrogen, specifically curated to protect her remains from oxygen, light, and even tourists. “It was designed to block any bacteria or fungi. Thanks to a special film, it also protects the body from the effects of light,” Piombino-Mascali continued in his statement, adding that he hopes tourists will stop fabricating “totally unfounded stories” about the world’s most beautiful mummy. 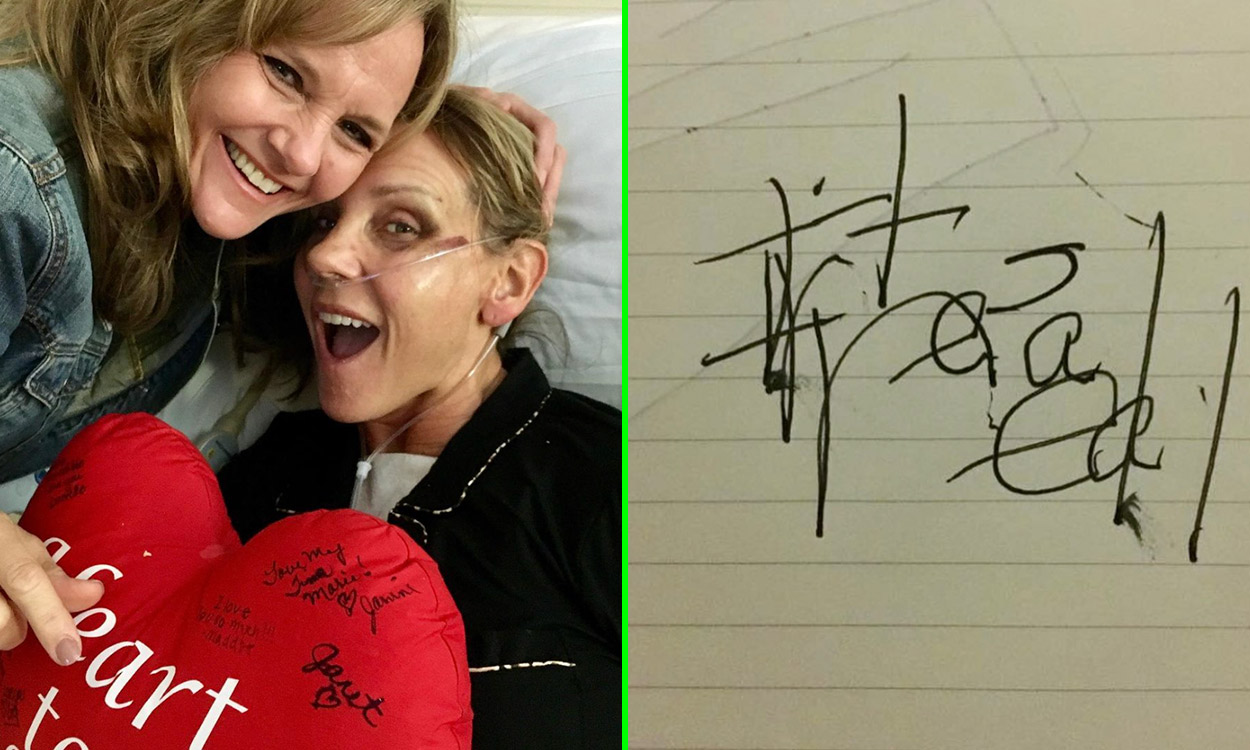 Back in 2018, Tina Hines of Phoenix, Arizona, suffered a heart attack after going on a hike with her husband. As it was later revealed by her family, the incident was totally unexpected, with Hines’ niece Madie Johnson describing her as “one of the most amazing, discerning, and healthy people I know.”

In a 2019 Instagram post recounting her aunt’s short-lived death—no pun intended—Johnson shared a photo of her latest tattoo and the incredible story behind it. In the post’s caption, she revealed that she had tattooed the scrawly message Hines wrote on a piece of paper just moments after she was resuscitated.

Johnson also revealed that Hines had to be “brought back to life four times” by her husband Brian and first responders who arrived on the scene before she even made it to hospital. Placed on a defibrillator, the mum of four miraculously woke up and, according to her niece, the first thing she did was ask for a pen so she could write something important.

Hines managed to scribble out a message which read “it’s real.” When asked what she meant was real, the woman allegedly pointed up towards the sky, a sign her family understood as a confirmation of the existence of heaven.

Since being brought back to life, Hines has made it her mission to tell as many people about her experience, becoming a Christian motivational speaker and writing a book claiming that heaven is real.

Johnson’s tattoo artist, Suede Silver, also took to Facebook to share the family’s story. And it certainly resonated with many people in the post’s comments section, with one user writing, “I’ve seen it. Most beautiful feeling in the world. I was in a warm, bright and beautiful place. Trying to get to some people in front of me. I wanted to get to them so bad but I guess it wasn’t my time to stay.”

A second shared, “I died in 2009 and experienced the beauty of heaven and the immense love of God. It changed me forever. I was a simple school teacher, wife and mom who secretly doubted if God could love me. Boy did I find out!”

Meanwhile, some sceptical users couldn’t help but reason such a story with science-based facts. “There’s actually a scientific reasoning for this. Brain death causes bright lights and hallucinations. It’s evolution’s way of comforting you for death, not some sort of god,” one user wrote.

According to a 2013 study published in the peer-reviewed journal, Proceedings of the National Academy of Sciences (PNAS), near-death experiences are essentially an electrical surge in the brain and can be responsible for the intense experiences vividly described by survivors.

That being said, as seen with Hines and those who have responded to her story, many continue to believe that the experience is a spiritual one. To each their own.