On 10 September 2022, Walt Disney Studios released the first official teaser for the new live-action movie The Little Mermaid, due to be released across theatres in May 2023. Audiences got their first look at the highly-anticipated blockbuster based on the nostalgic fairytale that encouraged many of us to stay in the bath for too long—savouring the moments where we could imagine that we too were mermaids and mermen.

The woman who landed the role of our beloved Ariel, Halle Bailey, has been highly praised by her fellow cast members and production team for her sheer talent. Bailey is most commonly known for being one half of the sister act Chloe x Halle—the Grammy nominated R&B duo championed by Beyoncé ever since they covered her track ‘Best Thing I Never Had’ on YouTube. The American singer-actress has since also starred in the TV series Grown-ish alongside her sister.

Director Rob Marshall, after having announced Bailey as their princess, stated: “After an extensive search, it was abundantly clear that Halle possesses that rare combination of spirit, heart, youth, innocence and substance—plus a glorious singing voice—all intrinsic qualities necessary to play this iconic role,” as reported by The DisInsider.

Melissa McCarthy, who dons the role of villain Ursula in the movie, recently recalled the moment she first heard Bailey’s rendition of the emblematic song ‘Part of Your World’. “We were on set and they started playing Halle’s version of the song. It’s so beautiful and it’s from such a place, she sings from her heart and when I heard it, there were seven of us that just burst out crying. She’s a remarkable young woman,” McCarthy told Andy Cohen on the late night talk show Watch What Happens Live.

Unfortunately, there are some netizens whose ignorance and self-importance has redirected the media attention away from this film’s important step towards diversity and inclusivity within the Disney repertoire.

After the trailer’s release, comments and videos began to appear across social media platforms criticising a number of trivial elements. Most predominantly—which can only be described as acute racism—is the critique of Bailey’s hair in the movie. The teaser, which currently sports over 1.5 million dislikes, has also been accused of falling short in creating a ‘realistic’ underwater world—presumably, users are finding any excuse to find fault with this film.

According to The Independent, trolls began trending #NotMyAriel on Twitter, accusing Disney of poor casting choices and insisting that a live-action remake should stay true to the original animation that displayed the mythical Ariel as a pale white woman with westernised straight red hair. Naturally, these trolls had zero issue with the concept of a singing crab or voice-stealing octopus?

In an interview with Variety, Bailey expressed how “barrier-breaking” this film truly is. She stated, “I want the little girl in me and the little girls just like me who are watching to know that they’re special, and that they should be a princess in every single way.”

This sentiment definitely reigns true for so many children across the world. The Little Mermaid remake—while experiencing some backlash—is sparking joy for several young children of colour who are now able to experience the wonders of Disney through a character that represents them. Many families recently took to TikTok to capture their children’s first reactions to the film’s trailer—and let’s just say that their wholesome nature is sure to put a smile on your face.

TikTok user Shannon Lanier shared a video on 13 September of their three young children watching The Little Mermaid trailer. In the clip, the kids are heard asking: “Why can’t we see her face?” to which Lanier responds: “They’re about to show it, keep watching.” As the trailer pans to feature Bailey, all three kids exclaim: “She’s black!” “Oh my god, finally!”

Another wholesome moment uploaded by @preciousavery onto the video-sharing platform depicts a young girl marvelling at how similar she looks to Bailey. The clip, captioned ‘When your favourite Disney princess looks like you’, first shows the young girl watching the trailer and, as soon as she realises who is playing Ariel, smiles and says: “I think she’s brown! Brown Ariel is cute!”

The wholesome video in question has already garnered 5.3 million views, even receiving a comment from Bailey herself. The Grown-ish star, alongside a collection of other famous TikTok influencers including Patrick Starrr and Mikayla Nogueira, shared her love by writing, “oh my goodness my heart.”

It should also be noted that the film holds an enormous amount of significance for older women of colour, who never had the opportunity to see a Disney princess who looked like them when they were children. Below is a TikTok uploaded by user Korris’ World, who filmed their mother and grandmother’s reactions to The Little Mermaid teaser:

Korris’s grandmother, when realising that the new Disney princess was black, noted: “Oh my goodness, they are mad about that,” referencing the criticism the movie has faced. The pair go on to comment, “If she was white… and with red hair…”

We can all imagine the stark difference of online attention the upcoming film would have received if Ariel had been played by a white woman.

Bailey herself took to Instagram in order to share her appreciation for the public’s heartwarming response. “People have been sending these reactions to me all weekend and I’m truly in awe seeing these little babies’ reactions makes me so emotional, this means the world to me,” she wrote. “Thank you all for your unwavering support.”

It can’t be denied that The Little Mermaid’s release in 2023 will go on to face similar backlash based upon racism and ignorance. Nevertheless, this film’s significance for people of colour is insurmountable and not something to be dismissed or disregarded. 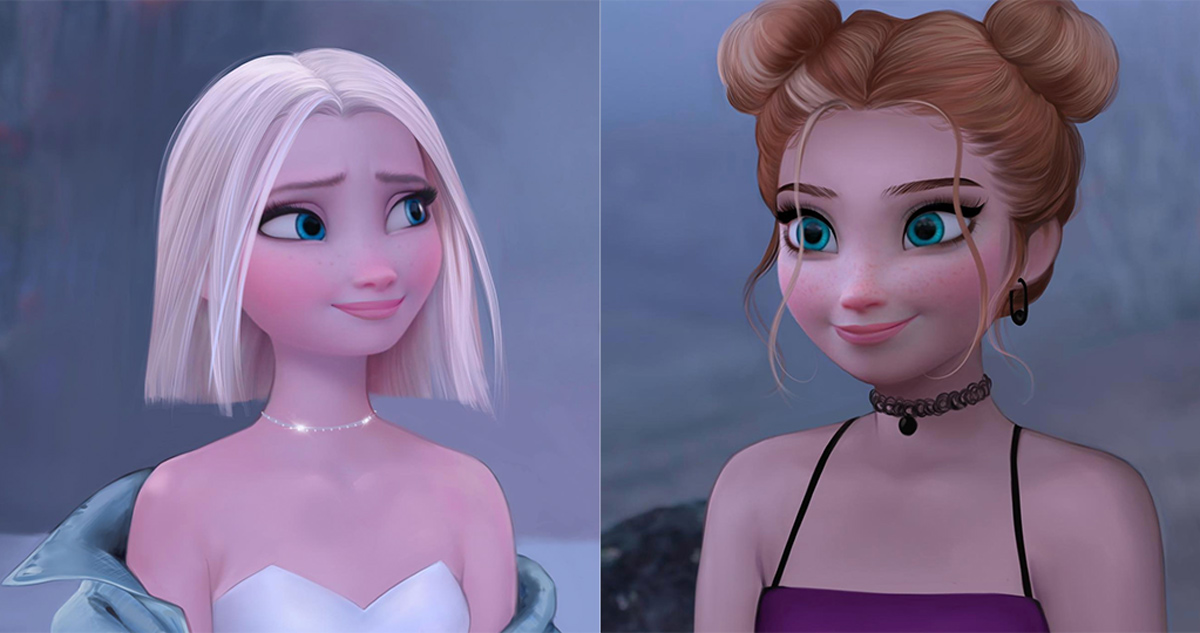 15 Disney princesses reimagined as modern women of the 21st century

It’s not news to anyone that Disney princesses are at the heart of Disney culture—given how most Disney movies centre around their stories, in turn, leaving an unforgettable influence on our childhood. They are often the titular characters in their films, they sing songs that are so catchy you can never truly get them out of your head and wear emblematic costumes that are still being sold to dreamy little kids to this day.

And yet, our favourite Disney princesses like Belle or Mulan are not the youngest to say the least, which means, as much as we love them, they could use a bit of a makeover. That’s where TikToker @vanotyarts (real name Yudelmis San Emeterio) comes in to save the day with her amazing artistic skills and her princesses reimagined as modern-day style icons.

Forget about Snow White’s seven besties, the real star of the show is now this pair of flared trousers.

I always thought that modern-day Ariel would be into crochet tops. Turns out I was right.

Let’s be honest here, Jasmine’s original look remains fabulous to this day. After all, there’s a reason Kim Kardashian dressed up as her on Saturday Night Live. But San Emeterio’s subtle update on Jasmine’s hairstyle is simply to die for!

I know Belle loves to read and all that, but that does mean she doesn’t get to experiment with her clothes either. Please note how perfect her new bag would be to carry her books around.

Though not always the go-to favourite for young Disney enthusiasts, Mulan’s character is a force to be reckoned with, and aged 26, I’m not ashamed to admit that all of her outfits slap. Can’t say no to an added pair of grandpacore-esque ugly dad shoes, however.

If you think Mulan deserves even more of a kick-ass transformation, check out this one where she’s sporting a gnarly tattoo:

Tiana’s new look screams strong and independent woman and I’m here for it. I can’t help but think that San Emeterio would agree with our take on princesscore. And if green doesn’t suit your taste, check this other transformation the artist has created:

Speaking of strong and independent princesses, how cool does Merida look in dungarees?

Kristoff’s name shouldn’t really be on this list but come on, how could you resist the beard? Also, loving the chokers on the sisters.

All it took was to replace Cinderella’s pink lip with a bold red one.

Not a princess, but a queen nonetheless.

Giving off model vibes and I’m here for it.

Crazy what a bit of eyeliner can do.

Last but not least, Rapunzel and what looks like the most complicated hairstyle ever.