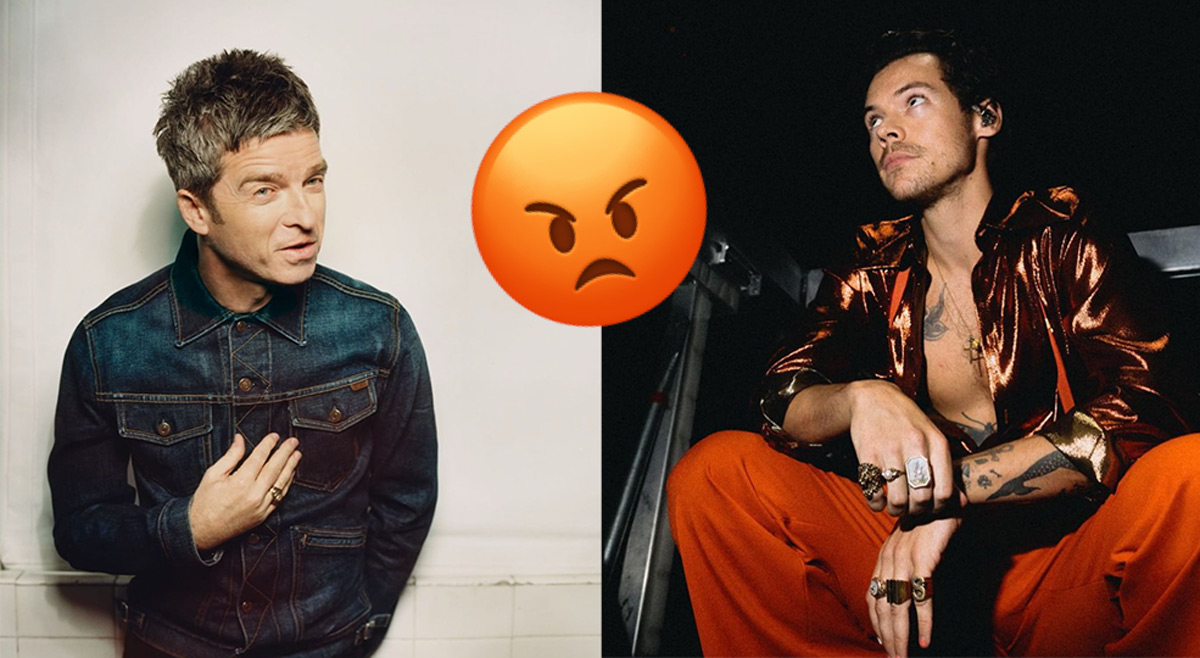 After One Direction officially split in 2016, former band member Harry Styles has, for some, reached icon status as a solo artist, topping the charts with his self-penned songs and winning his first Grammy in 2021, as well as an upcoming actor, filming roles on the big screen. But coming out with two solo albums and having a third one on the way—we honestly can’t wait for Harry’s House—doesn’t seem to be enough in the eyes of English singer-songwriter, former Oasis star and infamous hater Noel Gallagher.

Gallagher recently told the Daily Star that “anything that has come from [The X Factor]” has “nothing to do with music.” Speaking more specifically about Styles, he continued, “You’re not telling me Harry Styles is currently in a room somewhere writing a song. With any joy, he’ll be surrounded by a lot of girls. I can assure you he’s not got an acoustic guitar out trying to write a middle eight for something.”

The bitter rock star—who is often making headlines for laying into whoever’s popular at that moment (who can forget his Little Mix jibe?)—went on to claim that stars who made it on The X Factor don’t work as hard as “real” artists. To name but a few, the iconic show launched the careers of the aforementioned girl band, Leona Lewis, Olly Murs, Alexandra Burke and of course, One Direction.

Though we like to think that we’re mature enough to not take Gallagher’s comments to heart, we’d also like to point out one thing here: Styles has co-writing credits on every song he’s released since going solo, including his new single ‘As It Was’—which is a total bop, by the way.

For those of you who have been living under a rock, Styles returned to the music scene last week with his new track, which looks set to earn the heartthrob his second solo number one in the UK.

Rolling Stone also reported that the ex One Direction favourite has taken it quite a few steps further than the acoustic guitar, “For Fine Line cut ‘Canyon Moon’, he tracked down Joellen Lapidus, the woman who built the dulcimer that Joni Mitchell herself plays throughout her classic 1971 album Blue.”

As of now, Styles or any of his representatives have not responded to Gallagher’s pathetic pass. And honestly, we doubt they ever will. We like to think that the Pleasing founder is bigger than that… Treat People With Kindness after all. 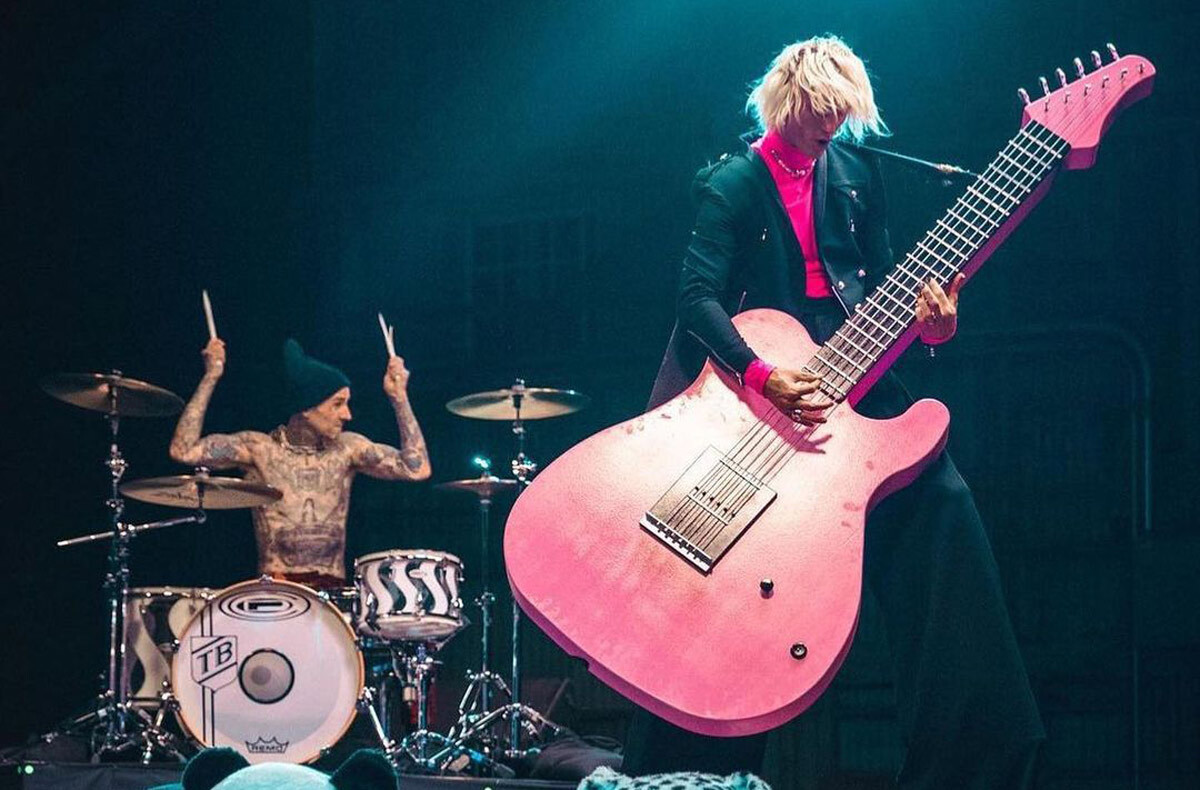 Machine Gun Kelly (MGK), real name Colson Baker, has had his fair share of controversy—take his incredibly long (and worrying) history of predatory behaviour with minors, not to mention his fetishisation of black women while having a black daughter himself. Apart from such serious issues, the artist seems to have a certain ‘je ne sais quoi’ that just rubs people the wrong way. Perhaps, it’s part of what some perceive as an embarrassing attempt to incorporate ‘edginess’ into his music as well as his relationship—one that has been compared to real punk couple Billy Bob Thornton and Angelina Jolie.

Now, another accusation against the rapper-turned-singer is set to poke a hole in the artist’s rock image—apparently, he may be muting his guitar in live shows.

In a video that surfaced on TikTok with over 2 million views and counting, a Guitar Center employee by the name of Gunnar DüGrey filmed himself working on MGK’s signature pink Schecter—supposedly ‘exposing’ the singer’s use of a kill switch during live performances. But for those of you who aren’t well-versed in guitar lingo, what the hell is it?

“For those of you who don’t know, you flip this [the kill switch] in the down position it cuts off all the volume making it completely silent and that got me wondering how does MGK use this in his live performances,” DüGrey explained.

In the video, DüGrey shows that when the switch is flipped downwards, the volume is cut off. After demonstrating this, he walks through multiple photographs of live performances by the 31-year-old where it appears that the switch is flipped downwards. The Guitar Center employee stated, “I’m not making any definitive claims here but it certainly seems like he doesn’t use it for much other than muting his guitar while he plays.”

This spurred mocking comments against the singer with users saying, “It’s actually Jamie Lee Curtis playing backstage for him.” Another wrote: “It’s like when you give your siblings the unplugged controller when gaming but the band gave him the silent guitar.” However, supporters of the artist have come out to rebuke these claims—stating that MGK addressed the kill switch previously and reportedly had the feature on his personal guitar flipped (so down is on and up is off). Evidence of such an interview was not found in our reporting and, therefore, cannot be confirmed.

Following the virality of the video online, MGK himself responded to the accusations in his own TikTok clip—disproving the claims made by DüGrey. While watching the Guitar Center employee demonstrate the use of the kill switch as being switched off when flipped downwards, MGK dispelled any confusion and stated: “this guy flipped the kill switch to the opposite direction for his video.”

“You reverse engineered it to go like this,” as the rocker shows the ease of which the switch can be rotated, “because when you go down it’s on.”

“You’re wearing a Liquid Death hat and I’m also a part owner of that company so you’re promoting me while hating on me,” the rocker added. Subsequently, DüGrey replied to the criticism he faced from the star by stating that he was unaware the kill switch could be rotated, and out of the box it came in, was flipped off in the down position sharing, “I was wrong, and I’m happy to admit that.”

“I didn’t realise that you can apparently just spin this thing around. Usually toggle switches […] you have to completely rewire them to change the direction, there’s no spinning like this. So, I just didn’t consider that and that’s on me,” he went on to say.

“The other mistake I made was not really knowing anything about MGK and not listening to any of his music before posting this video,” he explained, while providing evidence of a live guitar performance by the artist. “Because I think if I had heard this, let’s just say there’s no doubt in my mind that that was an authentic MGK live solo that wasn’t piped in from anyone backstage or through the mains, anything like that.”

DüGrey further explained that the video was never intended as a “hit piece” and admitted he should have conducted more research before making such claims—issuing a formal apology to the ‘Emo Girl’ singer. That didn’t stop some subtle shade still coming through from the guitarist replying to a comment that read, “So it’s just cheaply made. Interesting,” to which DüGrey replied: “more or less.”