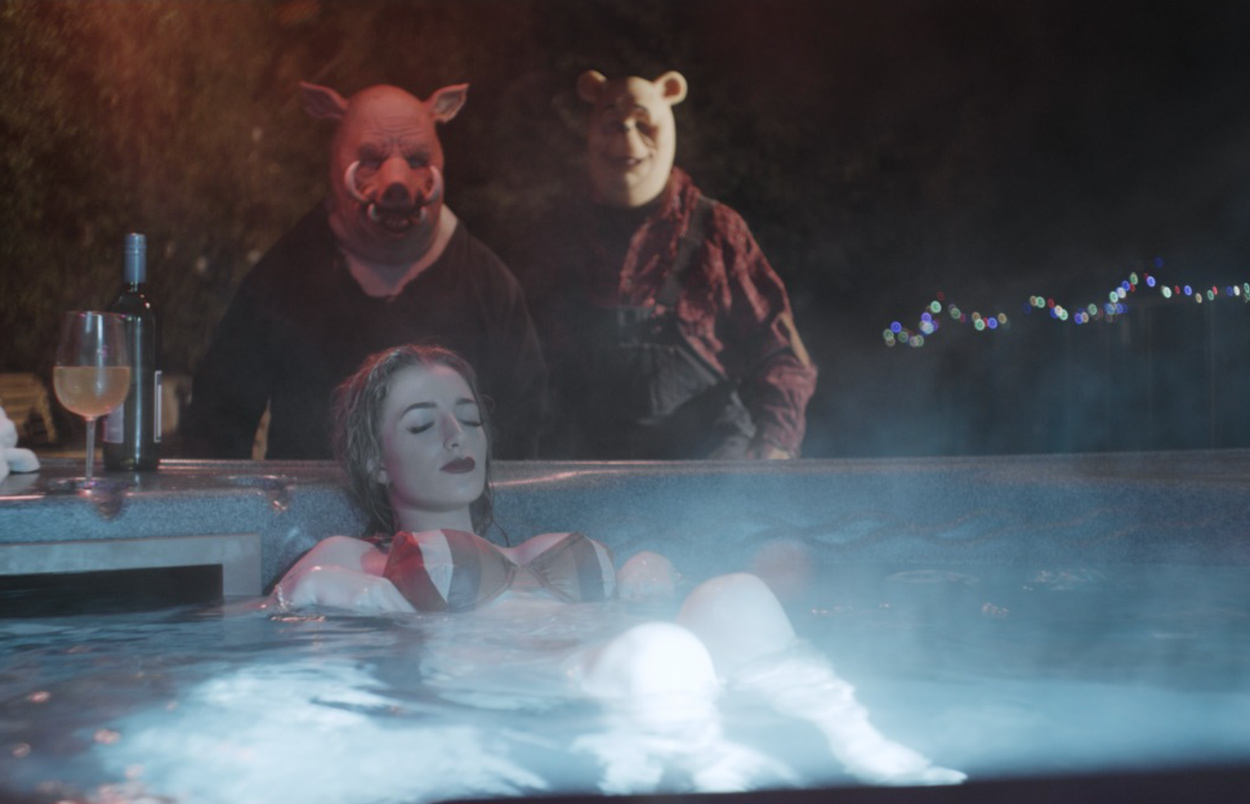 ‘Winnie the Pooh: Blood and Honey’ is the slasher film here to ruin your childhood

In the most bizarre development of 2022, the once loveable and honey-obsessed Winnie the Pooh is officially the leading star of a new violent slasher film titled Winnie the Pooh: Blood and Honey. Far from the lush green pastures of the Hundred Acre Wood, this unusual yet unique horror film sees Pooh and Piglet go rogue, feasting on forest animals, rampaging the woods and murderously plotting against Christopher Robin.

The film, which Rolling Stone referred to as “childhood-ruining,” follows Pooh and Piglet’s journey after having been abandoned by their closest companion Robin. Seeking retribution, the two vigilantes begin to wreak havoc on the inhabitants of the forest, kidnapping a bikini-clad young woman from a hot tub, beheading a lone holiday-goer, and gorging themselves on all of the honey they can find. Honestly, you can’t make this stuff up.

Director Rhys Frake-Waterfield and producer Scott Jeffrey recently spoke about their motivations for the slasher flick with TMZ. In the interview, they expressed how “this film is for different people who want a different type of Winnie.” They also teased a future project where Peter Pan and the world of Neverland are transformed into a wild circus featuring Captain Hook and Tinkerbell as tormented freak show acts.

The trailer for Winnie the Pooh: Blood and Honey was released on 31 August 2022 and captures all of the goriest moments. Viewers watch on, horrified, as Pooh and Piglet smear blood on windows, consume eyeballs, and chase a terrified victim through a swimming pool while wielding an axe.

Following the release of the highly anticipated trailer, the film’s leading man himself gave audiences a closer glimpse into what to expect in theatres. The actor behind the mask, Craig Dowsett, has warned viewers that this movie is “not for the faint-hearted.” Speaking with UNILAD, Dowsett expressed his immediate excitement at the prospect of taking on this iconic role. “When I first read the script I knew this was going to be special!” he exclaimed.

The Guardian, having recently reviewed the trailer, stressed the significance of the antagonists’ identities. The publication emphasised that the film’s primary purpose is to shock audiences by “subverting an innocent icon like Pooh.” For many of us, we remember Alan Alexander Milne’s creation as a simple creature whose soft voice and friendly nature helped soothe many of his companions when they were struggling. However, now we’re faced with a Pooh who craves bloodshed, violence and destruction—quite a big contrast.

We should ask ourselves, if the stars of this film had been obscure inventions rather than historic symbols of nostalgia, would we all still be so enthralled?

In all seriousness, we highly doubt the film will make an appearance during awards season. That being said, it’s somewhat comforting knowing that, out there in the ether, a piece of cinema exists to further cement Milnes’ seminal character Winnie the Pooh as a cultural icon. 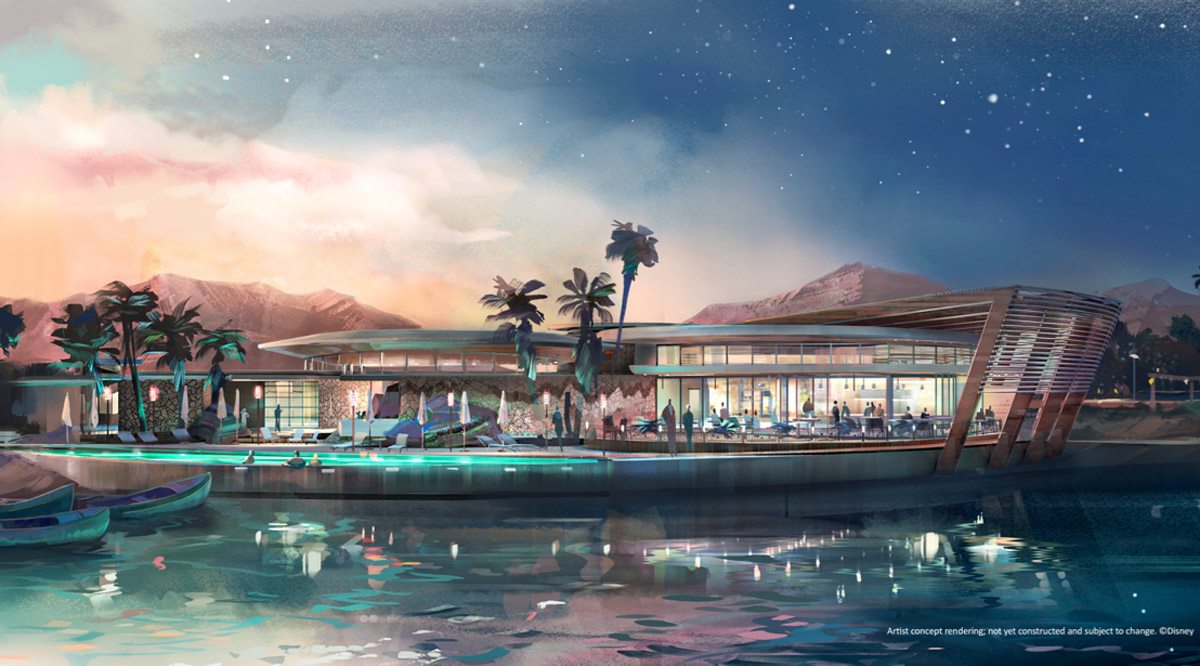 Disney is building a residential community for its adult fans. What could possibly go wrong?

What if you never had to leave Neverland? Well, recently, The Walt Disney Company is making that dream a reality with its ‘Storyliving’ resort.

While the corporation has a monopoly on, well, everything—from television and merchandise to multiple acquisitions—it has now announced a new ace up its sleeve. No, it’s not a dive into the metaverse, since it already has the patents approved for one, but something even wilder to imagine: a residential Disney village. That’s right, an actual Disneyland where you can live out your childhood dreams.

As an avid conspiracy theorist and someone who’s clued up on the Disney corporation’s long list of abandoned projects—some of which have inspired creepypasta stories that would make you bury your tin foil hat forever—I was sceptical when I first heard about the concept. That was until I read all about the new dystopian nightmare soon to come.

Given that we are still waiting on ‘UK Disneyland’, the £3.5 billion ($4.7 billion) theme park that was supposed to be built in London but has faded into oblivion since, I was not holding my breath seeing the news that Disney Adults—grown-ups who worship the ‘happiest place on Earth’—have been raving about this week. Really digging into its omnipresent and omnipotent bag, the company has unveiled plans for the construction of Storyliving, residential communities for mega-Mickey fans.

In the press release, Disney describes Storyliving as a “new home community where your next chapter flourishes.” So far, so good. “Imagine your life set in a place where world-famous Disney service is at the heart of it all.” Hmm… looking to reside in a Disney cult, anyone?

Now, as an avid Lilo & Stitch fan, with more ‘meega nala kweesta’ memorabilia than I should have as a fully grown adult, I marvelled at the thought of Disney venturing into the world of isolated communities for its aficionados. As dystopian and dramatic as it is—which we will get to later—Disney already owns, like, the entire world. Can’t hurt to add a village in the desert to its long catalogue of acquisitions, I guess.

Getting into the nitty-gritty of the new plans, The Independent reported on Disney’s main aim: to build communities with the “warmth and charm of a small town and the beauty of a resort.” The plans also call for housing, recreation and business developments in its first chosen sector called Cotino, “the ultimate destination for curious dreamers and doers seeking exploration, innovation, and inspiration,” according to its official website. The first project will be developed in the desert of Rancho Mirage, California, in the famous Coachella Valley.

The quaint community is set to feature “single family homes, condos, sections for senior living” for its residents, according to The Independent. A home for 1,900 housing units and even a selection of accommodations for residents aged 55 and over are planned. This seemingly random location was picked because Walt and Lillian Disney had a home in the area years ago.

Input Mag further reported that by having a club membership, Disney will cater to your every whim through curated experiences such as “wellness programming; entertainment ranging from live performances to cooking classes; philanthropic endeavors; seminars and much more.” How very nice of the multibillion-dollar corperation that wants to isolate residents while taking all of their money, indeed.

In an interview with Deadline, Josh D’Amaro, chairman of Disney parks, experiences and products, discussed the future plans in more detail: “As we prepare to enter our second century, we are developing new and exciting ways to bring the magic of Disney to people wherever they are, expanding storytelling to storyliving. We can’t wait to welcome residents to these beautiful and unique Disney communities where they can live their lives to the fullest.”

Although it’s pretty exciting to spend a day at Disneyland, my stomach churns at the idea of underpaid staff stuffed into sweaty character costumes. A closer look at the renderings of the new Disney town also illustrates how its “cast members” will staff the joint. The Disney Imagineers (Disney’s research and development team) did a good job selling that tiny detail, however, as the drawings show buildings with a sleek modern aesthetic, reminiscent of nearby Palm Springs.

As I mentioned earlier, this is not Disney’s first foray into the realm of residential planning. And no, I’m not referring to the wondrous Experimental Prototype Community of Tomorrow (EPCOT) Centre at Disney World in Florida either. In fact, the lead balloon, car crash, trainwreck and basically a big ol’ blunder of a first attempt that I’m about to dive into occurred in the mid-1990s. Disney built a planned community called Celebration in Florida back in 1996. After it sunk a whopping $4 billion (£2.9 billion) into developing it on the outskirts of Florida’s Disney World 23 years ago, the chapter was closed on the project as it was sold off to a private equity firms and the cookie-cutter homes—which apparently even had rules for the height of lawn grass—alas, fell into catastrophe, according to residents.

Deadline noted that Celebration “was an experiment in New Urbanism, a planning movement that sought a return to early American small-town life with walkable cities, diverse housing options, mixed local businesses and public space. Disney subsequently divested much of its control of the town.”

In every way, Disney tried to design Celebration as the happiest place on Earth. According to Insider, it included white picket fences—with an equally and overwhelmingly white population of 88 per cent, as revealed by The New York Times in 2000—and homes painted white, yellow, pink, tan or blue with enviously lush evergreen gardens. The fantasy also prolonged into the colder months as imported leaves would waft around in Autumn, while fake snow was heaped on rooftops in the frosty chill of winters.

However, Celebration was a pipe dream. Laid bare in recent years, its story includes a long recession, brutal suicide, a murder mystery, and even a “death pond” that destroyed the dreams of the corporation’s first live-in fantasy land.

In an attempt to once again form ‘The Bubble’ (the name residents of Celebration called the town), Disney’s Storyliving is already set in motion—much against detractors’ warnings, unfortunately. Aside from its many theme parks around the world, residents in California will be treated to an artificial oasis that awaits them. I’m not kidding about that by the way, the company is literally building an artificial oasis for the residential community as we speak. After all, what’s not to love about an isolated community patriotic to a mouse, right?

Well, if this one crashes and burns too, at least Twitter called it first.