Gamers to soldiers: How the US Army is using Twitch and ‘Call of Duty’ to recruit gen Zers – Screen Shot
Deep Dives Level Up Newsletters Saved Articles Challenges 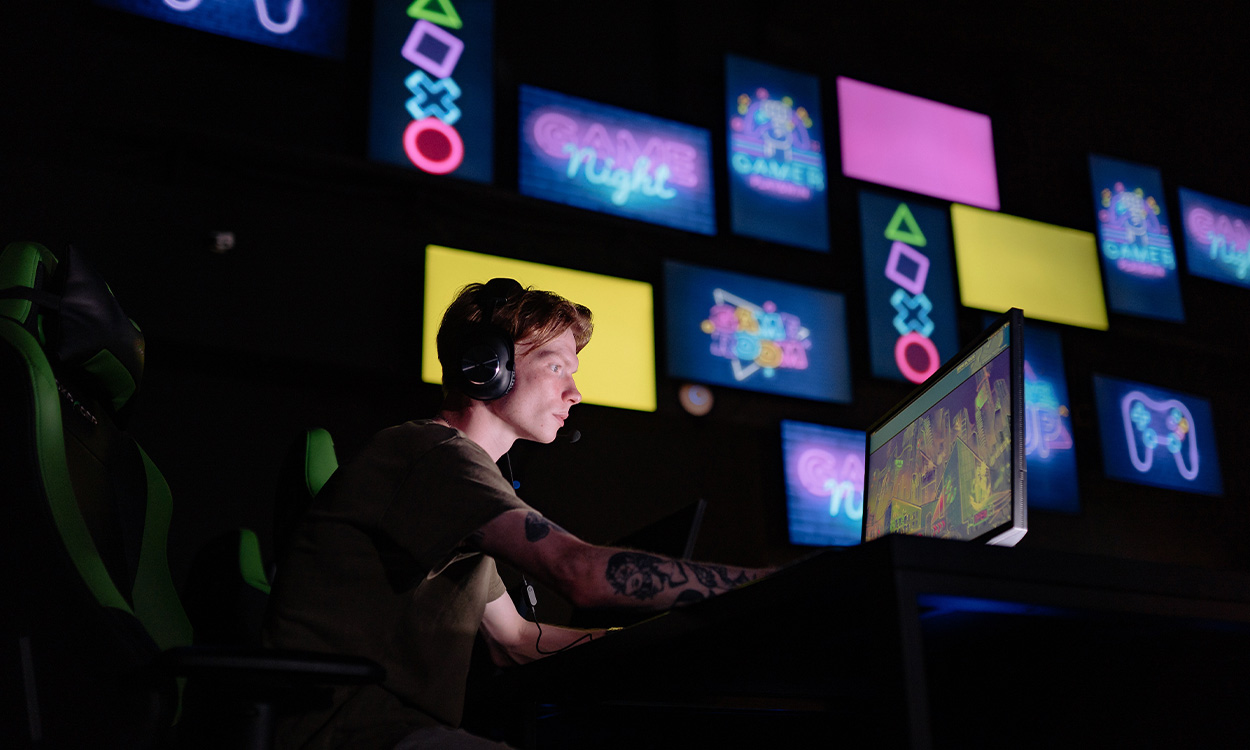 When foreign nationals thought about joining Ukraine’s fight against Russia in March 2022, they were given a stark warning: “This is not Call of Duty.” Though video games have certainly evolved over the years, the horrors of a real-world battlefield are still a far cry away from their virtual versions.

Despite this, however, the gaming industry has always had a close association with the military. And these ties are only getting stronger as we speak—with the US Army now doubling down on its digital recruitment efforts using unconventional ways to reach potential gen Z soldiers.

A combative history of war games and peripherals

During the 1980s, the US Defense Advanced Research Projects Agency (DARPA) first approached developers with the idea of writing video games that could be used to train soldiers. At the time, Chuck Benton, the creator of B.C.’s Quest for Tires, took up the challenge and eventually abandoned the gaming industry to focus on military simulations.

A few years later, the US Marine Corps used a modified version of the first-person shooter game Doom II to teach new recruits “an appreciation for the art and science of war.” In 2004, the Xbox game Full Spectrum Warrior was co-developed by a team at USC Institute for Creative Technologies—which was established as an official US Army University Affiliated Research Center (UARC).

“Set in a fictional middle eastern country, the simulation was a comparatively inexpensive means of teaching marine tactics in military training, but was also launched as a consumer product,” The Guardian reported, adding that America’s Army, a 2002 PC game that enables players to “explore the Army at their own pace,” doubles as a military recruitment tool even today.

Apart from video games, the gaming industry and military also share common peripherals—with both the US and British armed forces using Xbox controllers as an interface to command attack drones in live combat.

After America’s Army, however, the military watched the gaming industry evolve and released updated versions of the video game. Come 2015, the Pentagon reportedly included “electronic games” in the list of media that “may benefit military service recruiting and retention programs.” Three years later, the military founded its own esports teams, comprising active duty and reserve personnel who compete and specialise in popular games on the market.

One of the most notable teams is the US Army Esports, which is currently broken into divisions including: Call of Duty, Counter-Strike: Global Offensive, Fortnite, League of Legends, Overwatch, and Magic: The Gathering. The team has also expanded into streaming, in turn debuting another voice in the unsupervised world of competitive gaming.

Before 2007, early Call of Duty titles were all set in the World War II era. However, the setting changed to contemporary conflict following the release of Call of Duty: Modern Warfare. While it partly aimed to “freshen the fiction,” it essentially pushed for contemporary modes of combat in the gaming industry.

Now, reports have surfaced that the US Army has allocated millions of dollars to sponsor a wide range of esports tournaments, individual high-profile Call of Duty streamers, and Twitch events in the last year to specifically grow its audience with gen Z viewers—especially women, black and Hispanic people.

According to internal documents obtained by Vice’s Motherboard, the military considered gaming—more specifically, Call of Duty—as a useful branding and recruiting tool. “For example, the Army proposed using Twitch influencers to ‘create original content videos showcasing the wide range of skill sets offered by the Army’ and to use influencers to ‘familiarise [their] fans on Army values and opportunities,” Motherboard reported. “The Army also wanted to throw tournaments that featured ‘soldiers & top names in gaming’. Another goal of the campaigns was to increase the Army’s ‘favorability’ in viewer surveys.”

The documents noted that the force intended to spend $750,000 on a mix of the official Call of Duty League Esports tournament, streaming service Paramount+, and the HALO TV show. The service branch also planned to splurge $200,000 on sponsoring the mobile version of Call of Duty with a “reward-based inventory.” Essentially, the campaign aimed to provide in-game currency to players who viewed Army video ads.

When it comes to Twitch influencers, officials reportedly allocated $150,000 to be spent on Stonemountain64—a popular streamer who uploads gameplay footage of himself “roleplaying as a tongue-in-cheek commanding officer” during Call of Duty: Warzone matches—apart from streamers like Swagg and Alex Zedra.

“The Army also planned to spend $675,000 on a WWE sponsorship and $600,000 with gaming media outlet IGN, according to the documents,” Motherboard added.

However, an August 2021 email announced the Army’s decision to “pause all activities” with Call of Duty’s publisher Activision after the company faced a wave of sexual harassment complaints. “[We] also recommended the Marketing Engagement Brigade not send their eSports team to the tournament,” the email read. “[We] bring this to your attention because of the brand reputation issue.”

It should be noted that the US military’s esports teams have repeatedly run into controversy since their launch. In July 2020, both the Army and Navy teams got into trouble when they started banning users who asked about war crimes on their Twitch chat. On 22 July, a bill also circulated in the US House of Representatives to try and prohibit the military from having a “presence on Twitch or any video game. esports, or live-streaming platform.”

After a month-long hiatus, however, the Army team returned to Twitch—claiming to have updated its chat policies which will allow a “divergence of viewpoints while maintaining a healthy chat room.”

At the end of the day, the military’s brush with esports has given it direct access to thousands, if not millions, of gamers who harbour the potential of being valued recruits. The new way of digital recruitment has essentially stemmed due to failures in traditional methods following the COVID-19 pandemic and lack of physical events. The unsupervised nature of gaming channels has also aided armed forces to reach players of all ages.

On these terms, Game Rant noted that giveaways hosted on the US Army Twitch channel were easily targeting kids as young as 12, with many of the application forms redirecting to military recruiting forms. “With open microphone opportunities in Fortnite, Warzone, and League of Legends, there is no telling who the gamers are talking to,” the publication added.

Be it background scores or special effects (read Roblox’s iconic ‘oof’), video games have evolved into an integral part of media music and internet culture over the past two decades. Despite being eligible for music’s highest honour since 1999 in its film and TV music category, only one game has garnered a Grammy nomination in the past—namely Austin Wintory’s Journey soundtrack in 2012.

While ‘Baba Yetu’, the theme song for the 2005 game Civilization IV, won the Grammy for ‘Best Instrumental Arrangement’ in 2011, a whopping 11 years passed before Kirby Superstar took home the award for ‘Best Arrangement, Instrumental, or A Cappella’.

Now, February 2023 is set to be the first time a composer will officially walk away with a Grammy for scoring a video game. Many believe it’s been a long time coming.

As tongue-twisting as the award title sounds, in June 2022, the Recording Academy announced a new category to acknowledge video game tracks—following years of lobbying by game executives and composers alike.

Dubbed ‘Best Score Soundtrack for Video Games and Other Interactive Media’, the award seeks to “recognise excellence in score soundtrack albums comprised predominantly of original scores and created specifically for, or as a companion to, a current video game or other interactive media.”

“Overlooked and underappreciated,” explained Electronic Arts’ president of music Steve Schnur in an interview with Variety, when asked about the contribution of gaming tracks to modern culture. “Not just for the level of quality, but also the magnitude of success, how relevant it is to the next generation of music lovers. We needed to convince the powers-that-be that this music stands on its own and deserves to be judged against each other.”

Gordy Haab, an artist renowned for his contributions to several Star Wars games, also welcomed the new category and pointed out that composing for games “carries its own set of unique creative requirements.”

“The most obvious challenge is interactivity: music that can adapt and change in real time based on the consumer’s input, while continually maintaining musicality and interest,” he told Variety. “There’s really no other form of music-making quite like it.”

Meanwhile, Journey’s Wintory agreed that “game scoring is not just about writing music for games, it’s about writing music that the player is going to dance with in real time. That’s an art, one entirely unique to games.” Before the introduction of a separate category, Wintory had spent years trying to persuade his colleagues to join the Academy and enter their work for consideration.

Set to air on Sunday 5 February 2023, the Grammys recently revealed its complete list of nominations for the ‘Best Score Soundtrack for Video Games and Other Interactive Media’. Now, it should be noted that many of these titles were released in 2021. This is because the Grammy Awards only considers original sound tracks (OSTs) dropped between 1 October 2021 and 30 September 2022—unlike Game Awards, which has an eligibility cut-off in November 2022.

On these terms, Game Rant also mentioned that the music heard in-game and the OST are two separate entities, typically requiring individual contracts—“meaning that although titles may have been released earlier, their final soundtracks were not finished until after release.”

With this in mind, here are the contenders for the first-ever Grammy in the video game music industry. Which one of these do you think will head home with the historic award?

Although God of War Ragnarok was released too late into 2022 to be considered for the award, composer Bear McCreary still picked up a nomination for Call of Duty: Vanguard. As noted by Game Rant, the video game was “an entry to the first-person franchise which failed to garner the adoration of fans but continued an impressive legacy of OSTs.”

4. ‘Marvel’s Guardians of the Galaxy’

Sporting a narrative that won a Game of the Year award, Marvel’s Guardians of the Galaxy’s thrilling OST by Richard Jacques has also been nominated for the Grammys.

Old World is a historical turn-based 4X strategy game that boasts a beautiful soundtrack, composed by Christopher Tin and inspired by cultures worldwide.