In a deeply sad Instagram post, Britney Spears announced that she has suffered a miscarriage in the early stages of her pregnancy. “It is with our deepest sadness we have to announce that we have lost our miracle baby early in the pregnancy. This is a devastating time for any parent,” she wrote.

“Perhaps we should have waited to announce until we were further along. However we were overly excited to share the good news. Our love for each other is our strength. We will continue trying to expand our beautiful family. We are grateful for all of your support. We kindly ask for privacy during this difficult moment.”

The iconic singer, credited for hits such as ‘Baby One More Time’ and ‘Toxic’, announced on 11 April 2022 that she was expecting her third child with fiancé Sam Asghari. She had her two other boys, Sean, aged six, and Jayden, 15, with her ex-husband Kevin Federline.

What turned out to be a tragic event was supposed to be a positive milestone in the tumultuous life of the pop star. In November 2021, the conservatorship battle she faced against her father, Jamie Spears, was terminated at the request of Judge Brenda Penny. Jamie had been suspended as conservator of her estate the previous September, the same month her long-term boyfriend Asghari popped the all-important question.

Meeting on the set of her ‘Slumber Party’ video, Asghari helped Spears through many tough times and was a crucial shoulder to lean on during the star’s conservatorship battle.

In 2021, Spears claimed she was forced into taking birth-control while under the conservatorship, and prior to its dismissal spoke out about it, saying “I am not happy, I can’t sleep. I’m so angry, it’s insane. And I’m depressed. I am traumatised. I just want my life back.”

This devastating blow, although terrible, has brought forth an overwhelming amount of support for Spears from other celebrities and fans alike—with stars like Paris Hilton commenting, “🥺I’m so sorry for your loss sis.😢 Always here for you. Sending you so much love❤️ Love you lots B💘.” It’s heartwarming to see that whatever happens, the world continues to show endless love for the treasured pop star who’s been through so much already. 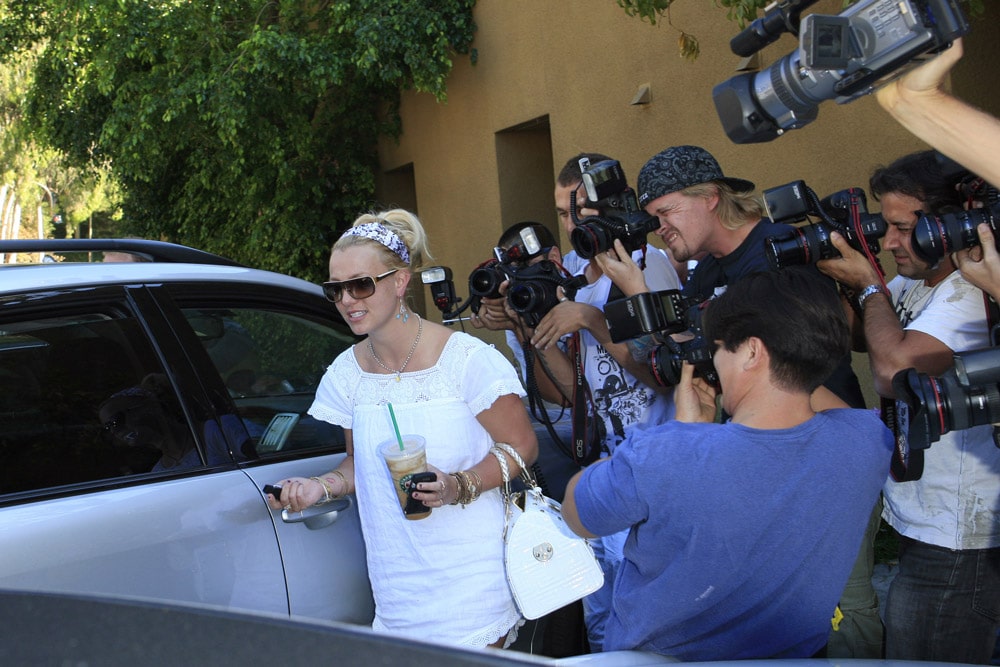 Everything you need to know about Britney Spears, her conservatorship and #FreeBritney

Britney Spears needs no introduction—from the Mickey Mouse Club to her recent choreography videos on her Instagram account, it’s safe to say that Spears has lived her whole life in the spotlight, which can usually come with more negatives than positives. On Tuesday 14 July, @DietPrada posted an Instagram post about Spears’ conservatorship and revealed that the pop singer hasn’t legally controlled her life and fortune in 12 years. What is the conservatorship about and is the #FreeBritney movement founded on something real?

What is a conservatorship?

Britney Spears’ conservatorship is a legal guardianship which is usually enacted for those incapable of making their own decisions. It was approved in 2008, after Spears had several infamous mental breakdowns. This arrangement means that her financial assets, estate and some other personal assets are under the control of her father and a lawyer. Even though the conservatorship was supposed to terminate this year, it was instead extended until the end of August for now.

Technically, the conservatorship means that Britney Spears hasn’t legally controlled her life or fortune for the past 12 years. Understandably, it has been a very controversial topic among fans, who constantly populate the #FreeBritney hashtags on Twitter and Instagram after a fan site originally began the #FreeBritney campaign in 2009 as a response to the conservatorship.

Some people are persuaded that the singer is being manipulated and entirely controlled by her father and her team, and Diet Prada went as far as to analyse Spears’ lyrics, proving somehow that her’ albums are cries for help. Even celebrities like Miley Cyrus have publicly expressed concern for Spears. While this possibility could definitely be real, it is important for people to look at the entirety of the story.

On the one hand, the #FreeBritney movement is convinced that Spears has been restrained by this conservatorship for years. On the other hand, those close to Spears have said several times over the years that the conservatorship is meant to help the star and explained that Spears is still involved in business decisions. The problem here is that no one knows the absolute truth yet, and in the meantime, videos and pictures shared by the star are not reassuring anyone.

A conservatorship is just another term used to describe a legal guardianship, which is typically granted to someone who is incapable of making decisions, such as people with mental disabilities or dementia—in other words, it’s an extra help highly needed in some cases. But in this situation, law experts told the Los Angeles Times that a conservatorship was “unusual for someone as young and productive as Spears.”

As most people know, in the late 2000s, Spears had several highly publicised mental breakdowns. During this time, she famously shaved her head, was spotted driving her SUV with her son Sean not strapped in a car seat but instead seated on her lap, and was seen hitting a photographer’s car with an umbrella. The list goes on. Following these incidents, Spears went to rehab many times and was committed to a psychiatric hospital twice.

This period led to Spears’ court-approved conservatorship, which was approved at the end of 2008 after her father, Jamie Spears, petitioned for an emergency “temporary conservatorship.” Jamie Spears was then granted oversight of his daughter’s health as well as her estate, which involves everything from negotiating business opportunities to restricting visitors. Attorney Andrew Wallet was also assigned to help manage her financial assets. In 2019, Jamie Spears requested to extend his daughter’s conservatorship to more than 10 states.

While the exact details of Spears’ conservatorship aren’t known, it has been confirmed that her financial decisions need to be documented in court reports. According to Business Insider, Spears’ most recent financial documents “showed that as of 2018, she had a net worth of $59 million. That year, she spent $400,000 on living expenses and $66,000 on household supplies. She also spent $1.1 million on her legal and conservator fees that year. Her father took home $128,000 of that.”

When presented by her family, the conservatorship is also said to protect her from toxic people. In 2009, Sam Lufti was accused of saying he was her former manager and being a bad influence during her mental breakdowns. Shortly after that, and again in 2019, Spears was granted a restraining order against Lufti.

Is this protecting or exploiting?

In 2019, after remaining incredibly active in her career since her conservatorship was implemented, Spears checked into a mental health facility, which prompted the #FreeBritney supporters to express concern yet again. At the same time, Spears’ lawyer resigned as co-conservator without giving a reason for his resignation, which left Jamie Spears as the only conservator. In May 2019, during a status hearing, Spears allegedly asked the judge to consider ending the conservatorship, which was refused.

There seems to be even more to the story, with Spears’ mother apparently being involved in the #FreeBritney movement and the conservatory getting extended twice in 2020. And yet, things remain unclear. This prompts the question: where does the line lie between protecting someone—famous or not—their mental health and their family, and exploiting them? Was Spears lied to and set up, or has she simply always received the help and support she needs?