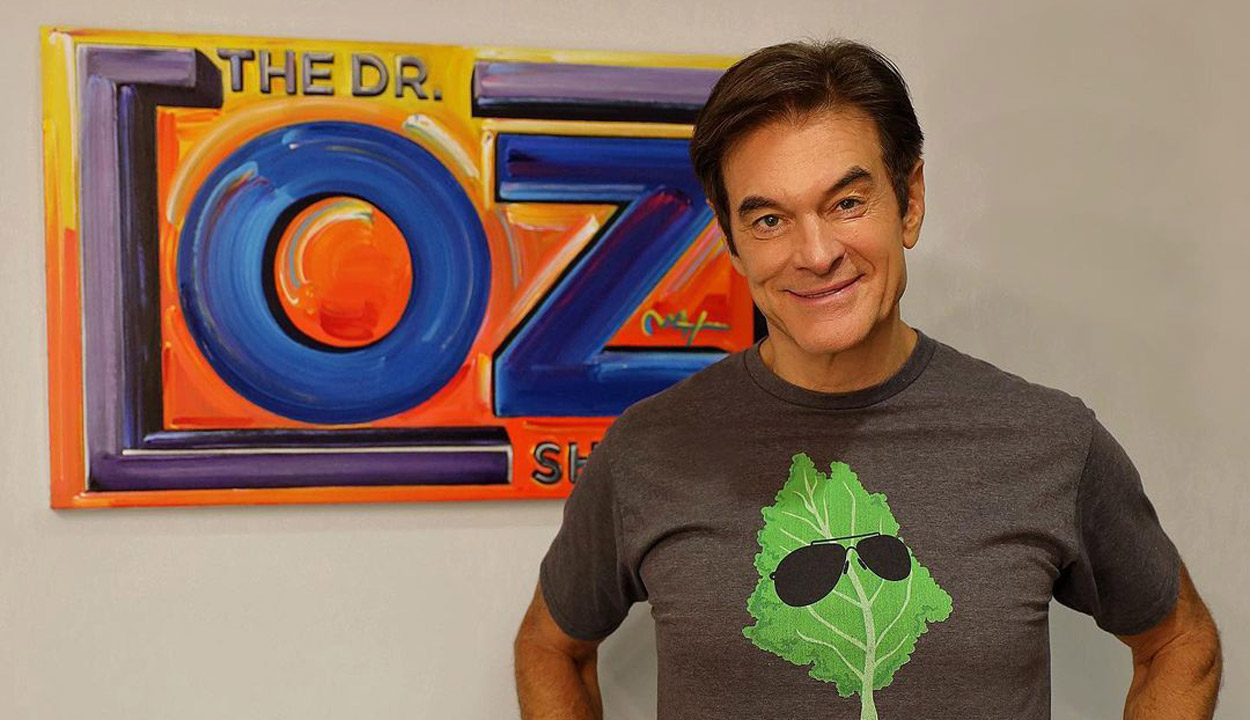 Republican TV star Dr. Oz says incest is ‘not a big problem’ as long as ‘more than a first cousin away’

The host of the daytime television programme The Dr. Oz Show is also the Republican nominee for the 2022 US Senate election in Pennsylvania and the first Muslim candidate to be nominated by either major party for such a position. Yep, his political penchant explains quite a bit about the good doctor’s controversial stances.

In a newly-resurfaced radio interview with The Breakfast Club that was initially recorded back in February 2014, the candidate stated that incest was “not a big problem” as long as “you’re more than a first cousin away.” Yuck.

Dr. Oz followed this statement by explaining that girls don’t want to have sex with their fathers simply because of pheromones. “My daughters hate my smell,” the Republican nominee explained on the show.

As soon as the audio resurfaced, his Democratic opponent John Fetterman was quick to latch onto the comments, tweeting, “Yet another issue where Oz and I disagree.”

As twisted as the man’s opinion is, you might be wondering how the topic came into the conversation in the first place. Listening back to the recording, it appears that Dr. Oz aimed to advise a listener who had revealed they were in a sexual relationship with their cousin. Somehow, ‘no biggie’ was what he considered an appropriate answer.

When one of the radio show’s hosts asked him about third cousins, he confirmed those were “fine,” adding that “every family has genetic strengths and weaknesses.” Dr. Oz then took it upon himself to scientifically justify incest and explain why we tend to date outside of our family tree.

“The reason we naturally crave people who are not so like us is because you just mix the gene pool up a little bit so that if I had one gene for, let’s say, hemophilia, which is a classic example where you bleed a lot if you cut yourself, I don’t want to marry a cousin who has the same hemophilia gene, because the chance of our child having both those genes is much higher,” he stated, unconsciously suggesting that, were our survival instincts not so strong and developed, we’d all be pretty happy with dating our siblings.

Not only are Dr. Oz’s statements troubling, to say the least, they also diminish the real danger of incest—the fact that, in most cases, it’s nonconsensual and psychologically scarring. There’s a reason the act is also called intrafamilial sexual abuse. Most instances occur between older male relatives and younger female children in families of all demographics.

In the US, more specifically, incest seems to have been largely overlooked up until the 1980s. In 1975, one text asserted that the rate of father-daughter incest in the country was as low as one in a million families. Further research published by Psychiatric Times in 2011, however, revealed that it was much more common.

It’s safe to say that we don’t need ‘influential’ people like Dr. Oz adding fuel to the fire with dubious comments like this. 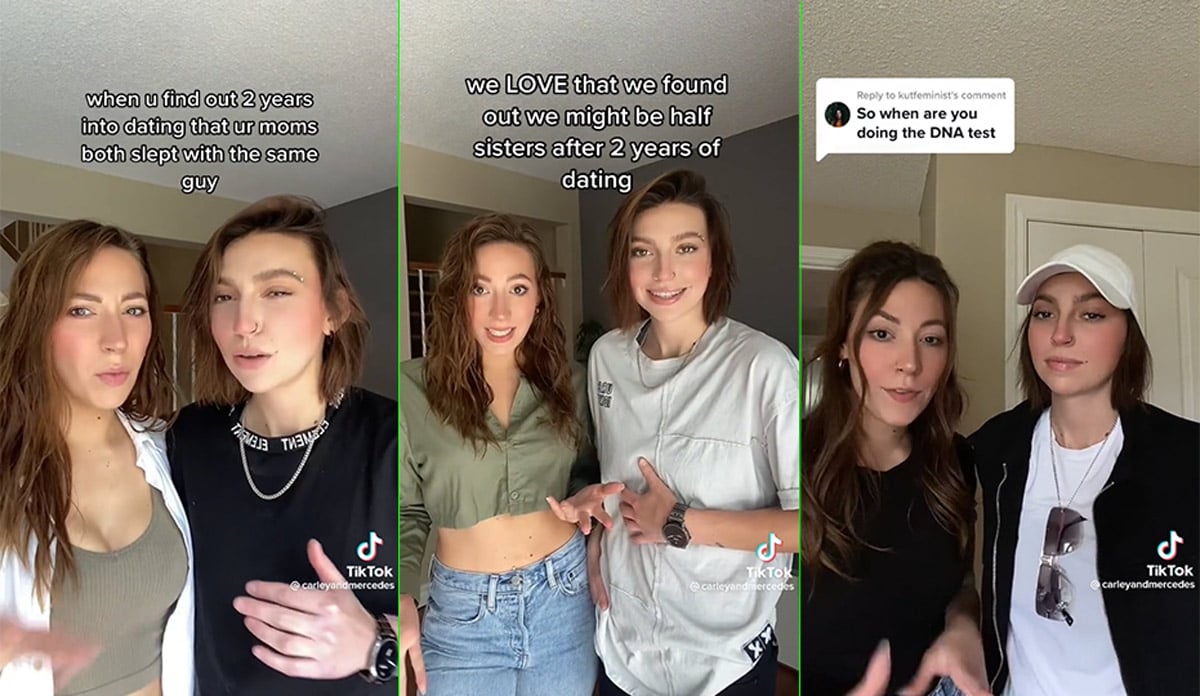 The internet, in all its glory, comes with many positives and negatives. One day you might find the perfect skincare brand you’ve been manifesting for ages—and it’s affordable!—while on another you might come across a video where a couple realise they might be siblings. I’m sorry to say that today is one of the latter days…

Carley and Mercedes, who are popular on both TikTok and (more recently) OnlyFans, have been dating for about two years now. Though the two women have seen much success on both apps for a while now, it was only four days ago that their content went truly viral. In their initial clip, which now has more than 8.1 million views, 1.2 million likes and just under 8,000 comments, Carley and Mercedes revealed the possibility of them sharing the same father.

What’s worse is that they don’t seem to think that’s enough for them to call it quits or at least take a break while they await the results of a DNA test. In fact, they haven’t even taken a test at all as of yet. In the video’s caption, the couple asked their followers, “Should we take a DNA test?” while in a pinned comment, they further questioned, “If we’re actually related, is it wrong to stay together?”

Though I personally have my own doubts regarding the veracity of this shocking and very taboo story—finding out you might be dating your sibling is one thing, sharing the news with your 600,000 followers as well as the fact that you might stay together is another—it didn’t stop the video from rapidly spreading online like a bad rash.

And it looks like Carley and Mercedes, who are content creators after all—meaning they’re driven by engagement, likes and impressions—have noticed just how much potential their probable and so-far-unknown incest had. Ever since their first TikTok went viral, the couple has shared three more videos in a similar format to the initial one and an additional clip where they’ve answered one user’s comment asking when they’ll take a DNA test. They’ve also capitalised on the ambiguity of their relationship, having set up an OnlyFans account under the username @Notyouraveragesisters. Lovely…

That being said, most of you will be relieved to learn that, yes, they finally ordered a genealogical DNA test and are now waiting for it to arrive in the mail.

According to UNILAD, Carley and Mercedes aren’t the first couple to go viral on TikTok for similar reasons either. Back in 2020, Diana Camila Avila and Jordie Vena made headlines for being in a relationship despite being step-siblings. “The couple started off pretty much like any other couple trying to get TikTok famous, with clips involving dancing, cosplay and comedy skits based on their relationship, but they caused quite a stir when they later revealed that they’re actually step-siblings,” wrote the publication.

Speaking to LADbible in 2020, Diana said: “We met six years ago but we started dating three years ago. We met through our parents.” She went on to add that it was “love at first sight” but because of how they met, they both kept their feelings quiet. However, one night, while their parents were away, the pair ended up kissing. The rest is history…

While we all impatiently await the result of Carley and Mercedes’ DNA test, we recommend you scroll through the comments sections of the couple’s latest saga of videos. You won’t regret it, just look at some of our top picks: