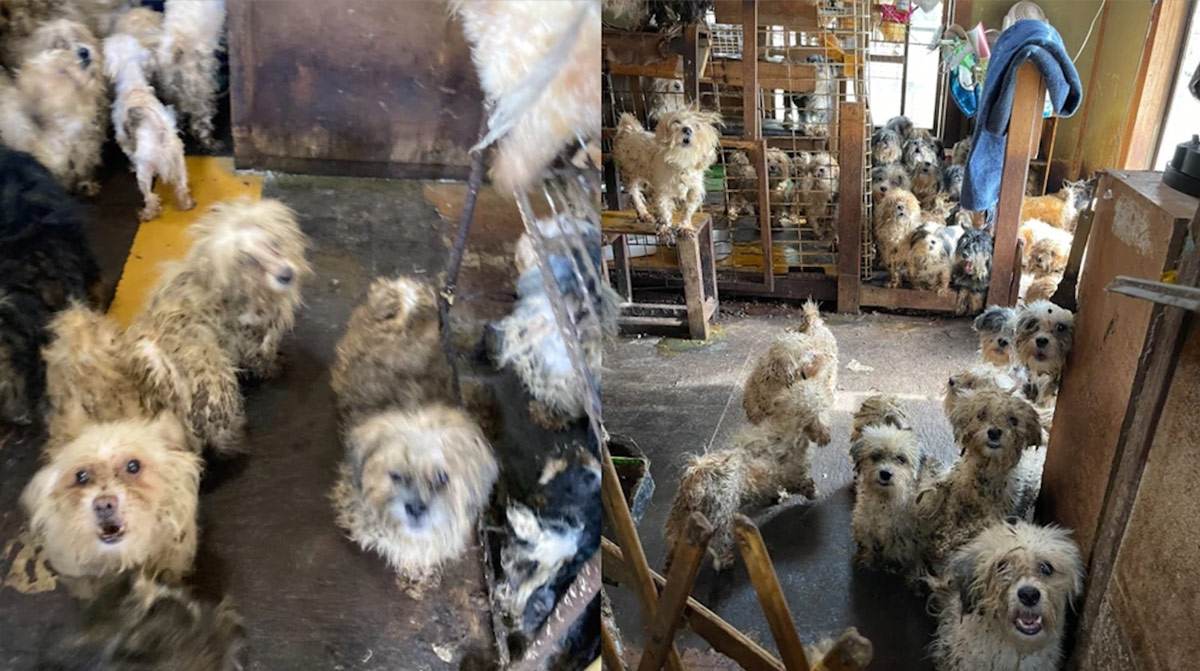 A 63-year-old woman living in Tokyo’s Chiba prefecture was charged on Tuesday 14 June 2022 with animal abuse after it was discovered that she was mistreating her 221 dogs who she lived alone with. The poor animals were found after the Chiba prefectural police raided her cramped home in March and found 221 Maltese and Shih Tzu hybrids festering in their own waste, with red and inflamed eyes and suffering from skin diseases due to how neglected they were.

Though it hasn’t been confirmed whether it was the exact reason the abused pets were finally rescued by the Companion Animal Club (CAC) Ichikawa as well as the Animal Life Matters Association, VICE reported that the woman’s neighbours “could smell the dogs’ faeces and urine in the air floating in through their homes, often forcing them to close their windows to block the stench.” The pets’ howls could also be heard at all hours of the night.

Speaking to the publication, Rie Kaneko, president of the CAC, explained, “This is a clear case of animal abuse. They were emaciated and covered in scars, even on their eyes, because they were fighting—some have actually killed each other.”

While some of you might wonder why the old woman would have kept that many dogs if she couldn’t take care of them in the first place, such behaviour—though extremely selfish in many ways—can be explained. In Japan, what is known as ‘animal hoarding’ has turned into a growing matter that requires solving as soon as possible.

As the country’s older population hits a record high—its society has become the oldest in the world—local governments are struggling to cope with the burgeoning problem of animal hoarding among families who are growing senile or suffering from worsening chronic diseases.

Homes are becoming overrun with urine and faeces from pet dogs and cats, making a case for government officials to determine concrete policies in order to address animal abuse and seek the advice of welfare specialists.

Such a push eventually led officials to revise the animal protection law and impose a prison sentence of up to a year or a fine of up to 1 million yen (£6,203) if someone is found abusing animals by subjecting them to poor living conditions or hoarding them.

Speaking to VICE, Yumiko Takemoto, the vice president of Animal Life Matters Association, explained that in the woman’s case, though she had never been invited inside the house, she could see from outside that the place was “overflowing” with dogs.

“If you peered inside her home, you could see dogs on top of each other near the front door, in the hallway, all the way up her stairs, and I wondered if there was even a place for a human being to eat,” Takemoto added.

No matter how badly the woman was treating her loyal companions, Takemoto explained that she never wanted to let some of them go, “We would offer to take some of the dogs and would let her choose which pets to give up, but she’d say she was tired—she refused to give them up.”

Ten years prior, the woman only had a handful of pets, VICE stated, but the animals just kept reproducing. The rescued dogs are now in the process of finding new homes. “Though they were once covered in faeces, people are still interested in adopting them,” Takemoto concluded.