Canada’s cultural genocide is out in the open. Here’s what they were hiding – Screen Shot
Deep Dives Level Up Newsletters Saved Articles Challenges 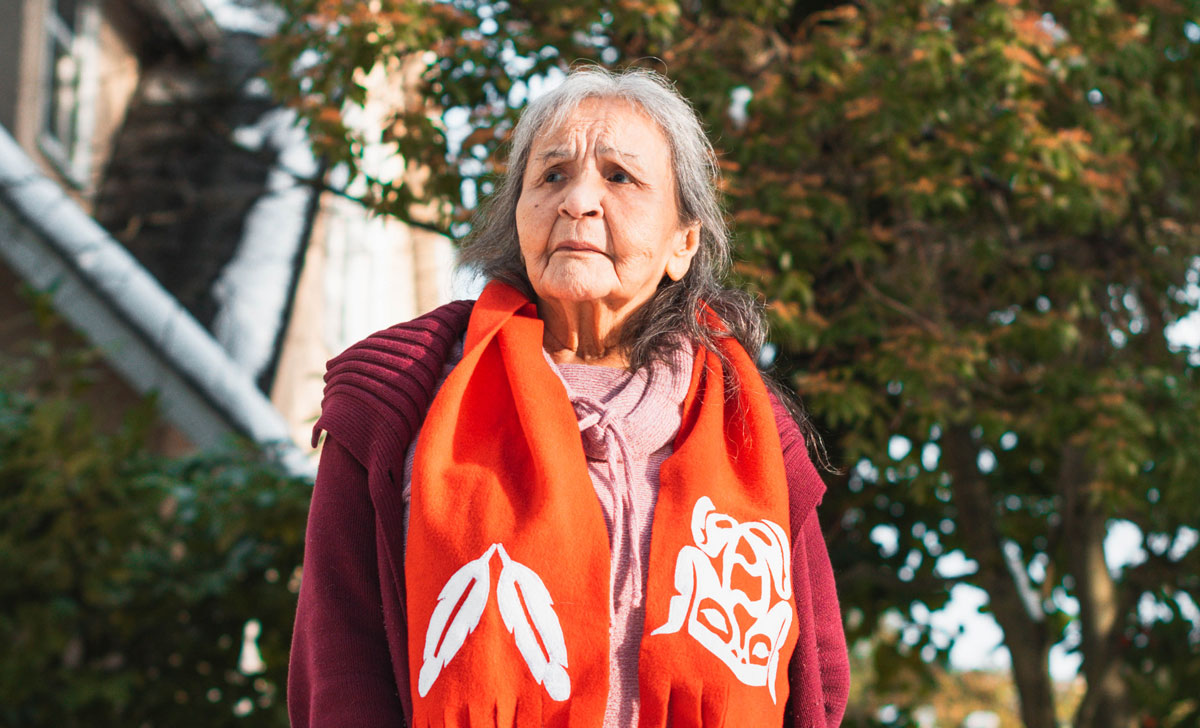 Canada’s cultural genocide is out in the open. Here’s what they were hiding

Hundreds of mourners and protestors gathered in Toronto on 6 June to lead a peaceful event, titled ‘Bring Our Children Home’, to honour the lives of the Indigenous children found buried in an unmarked mass grave. The mass grave was found at the ‘Kamloops Indian Residential School’ located in British Columbia, Canada. The burial held the remains of an estimated 215 Indigenous children, with some as young as three years old. The former residential school was eventually closed in 1978. It was founded in 1890 and run by the Catholic Church up until 1969, where it was then taken over by the Canadian Federal Government.

This unthinkable loss broke the hearts of Indigenous peoples in Canada but it did not shock them like it shocked the world. This is not an ‘untold story’. It’s been told by Indigenous peoples throughout history, you just haven’t been listening. It’s time to.

In a documentary, I produced last year, titled Canada’s Keepers, I had the honour and privilege to interview the most enigmatic, powerful and beautiful Indigenous women about this history, and their present-day experience as Native women in Canada. The highest honour was interviewing Indigenous elder and residential school survivor Zephiria Joseph (photographed above). I will be using the testimonies of Joseph alongside Rose Trimbell’s (her daughter), Robyn Lawson’s and Cynthia Taha’s to break down what you need to know from the people you should hear it from. We have delayed the release of the documentary due to this heart-breaking news and to respect the lives lost.

What are residential schools?

The first Canadian residential school opened in 1831 and what followed devastated the Indigenous peoples of the land for generations. The creation of the ‘Indian Act’ in 1871 was to “kill the Indian in the child.” Lawson told me, “The Indian Act was created for one purpose only and that was to kill the Indians. It was to get the Indians out of their way and in support of their, we’ll call it industrious leanings—on our side, I call it rapacious plundering.” Taha, a registered nurse, explained to me that “the government […] took several of our people by force and put them onto reservations and they were given numbers, they were registered according to these numbers. The Indian agents, so to speak, also took children and [put] them [in] residential schools.”

It is believed that more than 150,000 children from the First Nations, Métis and Inuit communities were stolen from their families and forced into residential schools. Some say that around 4,000 never returned home—the real figure is thought to be terrifyingly higher. “I was one of those kids,” Joseph told me.

What happened in residential schools?

“We could not speak our language. We had to talk [in] English. We get caught talking Native, we were punished for it. They didn’t prepare you for work or anything, they just [taught] you how to act like white people. Talk like white people […] How am I gonna be white when I’m brown? What do you wanna do about that?” Joseph said firmly. It gets even worse.

Joseph shared with me that she was sexually assaulted by a priest at the school—most of the children were. “When [I went] back to the school and [told] the mother superior what he did she said ‘You’re just lying because you wanna go home’. They just called me a liar and punished me.” You couldn’t believe it gets worse but it does. The last residential school didn’t close until 1996. That’s just my lifetime ago. Trimbell, Joseph’s daughter and a licensed counsellor, had this to say, “They wanted to ‘kill the Indian in the Indian’ and they left an empty shell of people who hated themselves, hated their culture, the colour of their skin—they were completely lost.”

What needs to be done?

Canadian Prime Minister Justin Trudeau made a statement regarding the monumental discovery in Kamloops, to the House of Commons on 1 June, “Today, some of the children found in Kamloops, and who have yet to be found in other places across the country, would have been grandparents or great-grandparents. They would have been elders, knowledge keepers and community leaders.” He continued, “They are not. And that is the fault of Canada.” He has also pledged $33 million dollars for the further investigation of other residential schools. Let’s hold out celebrations until we see some actual action.

Trudeau has also called on Pope Francis to issue a formal apology for the part the Catholic Church played in the Canadian residential school system. Trudeau, on a trip to the Vatican in 2017, had asked Pope Francis for an apology at the time, for the “spiritual, cultural, emotional, physical and sexual abuse” of Indigenous children. The Pope, to this date, has never issued an official apology. Without an actual apology, there is no real accountability from the Catholic Church. Although Trudeau making these demands appears to be well-meaning, he is no saint—in fact, he is the worst.

Andrew Mitrovica, a Toronto-based writer, wrote in an article for Al-Jazeera that “it is necessary to deconstruct Trudeau’s astonishingly trite tweet to reveal not only its signature glibness but also this prime minister’s rank, disingenuous nature and historical illiteracy.” We don’t want empty words. What about the thousands of missing and murdered Indigenous women and girls (MMIWG) you have failed to do anything about, Prime Minister Trudeau? What about the Indigenous still being taken from their families and forced into foster care? What about your broken promise to not go through with the Trans Mountain oil pipeline project that would destroy Squamish territory? And across the Atlantic, what about the UK actually coming to terms with its colonial history and present? What about some actual reparations? 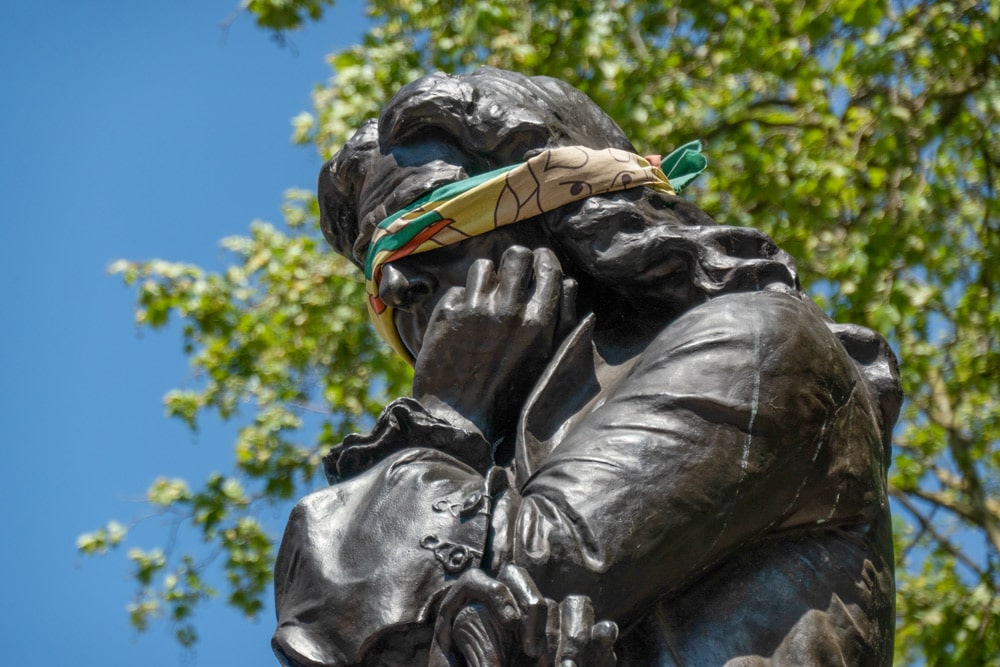 When Black Lives Matter protesters took down the statue of English merchant Edward Colston in Bristol last month, many celebrated the news while others disapproved. This morning, Wednesday 15 July, the empty spot where the statue used to be was replaced with a sculpture of one of the protesters whose anger brought Colston down.

The figure of Jen Reid, who was photographed standing with her fist raised after the merchant’s statue was toppled by Black Lives Matter protesters, was erected just before 5 a.m. by a team directed by the artist Marc Quinn.

According to The Guardian, Quinn’s team of ten people arrived in two lorries and worked quickly to install the figure of Reid, who said she had been secretly working with the artist on the idea for weeks. It also came as a complete surprise to the authorities. “A cardboard placard reading “black lives still matter” was placed at the bottom of the plinth,” adds The Guardian.

Shortly after the team left the location, Reid stood in front of the statue with her fist in the air. The meticulous planning behind erecting the statue before officials arrived meant the vehicles left the scene about 15 minutes after they first got there.

By 8 a.m. a crowd of commuters was gathered to take pictures and discuss the statue but there was still no sign of the council or police. The new sculpture, titled A Surge of Power (Jen Reid) 2020, is likely to reignite the debate on whether it was right to take down the Colston statue five weeks ago.

While the team behind the sculpture is confident it has broken no laws, people are now expecting Bristol police and council’s response.