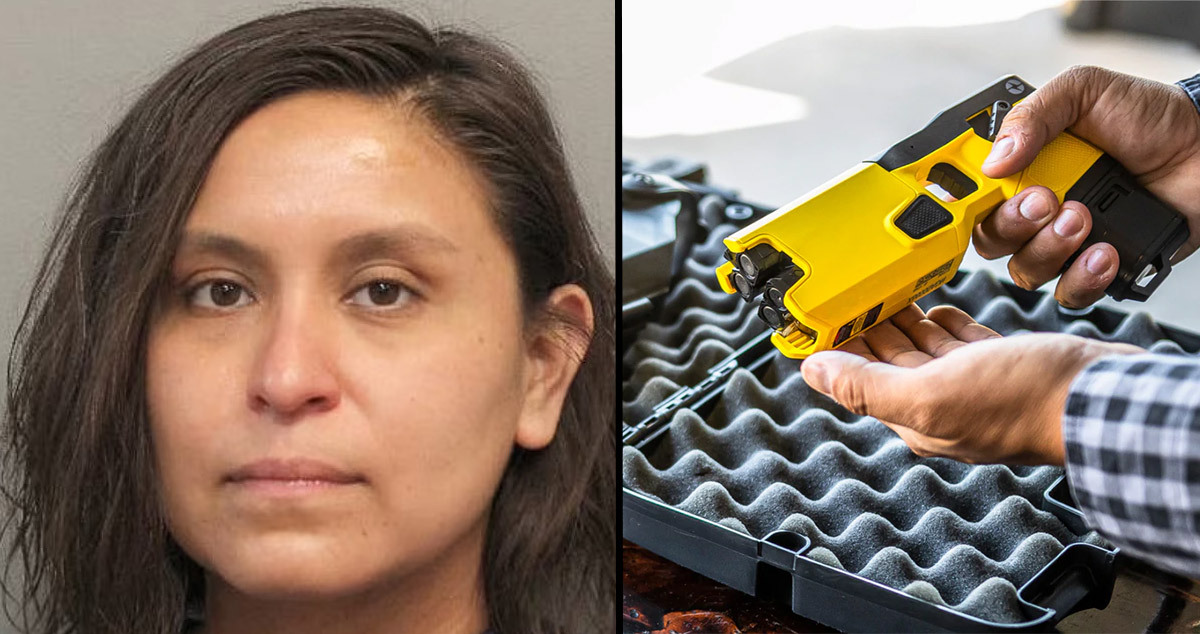 A former Harris County Deputy Constable from Texas has been charged with three accounts of causing injury to children under 15. Xochitl Ortiz is accused of allegedly using her boyfriend’s taser on her three children, aged eight, 11 and 12. The kids, who are safe and survived the incident, are now living with their dad.

The 34-year-old is currently in the process of divorcing the children’s father, who reported the abuse to the authorities. Ortiz’s current boyfriend, Christopher Worthington, who is also a police officer, was sacked days after she was fired for violating the force’s policies. However, Worthington is not facing any criminal charges as of today.

Appearing in court on 20 May 2022, the hearing officer told Ortiz,“The facts allege that you used a Taser to tase each of your children: one on the hand, one on the buttocks, one on the shoulder.” Each of these offences carries a sentence of up to ten year in prison under Texas law.

The attacks are alleged to have taken place between 1 and 4 April this year, but Ortiz’s lawyer, Russell Neumann told KTRK-TV, “I’m just notifying everyone she maintains her innocence. She continues down the path that we’re going to fight this case and she won’t accept anything.” In other words, if these incidents did take place—which is yet to be proven—it remains unclear why Ortiz used an electroshock weapon on her children.

Ortiz’s former boss, Constable Mark Herman released a statement to Houston NBC affiliate KPRC 2 regarding the matter, which read: “On April 14, 2022, my office received a complaint in reference to these allegations and immediately initiated an investigation […] culminating in my office placing ex-deputy Xochitl Ortiz into custody and transferring her to the investigators.”

The former policewoman remains in jail on a $450,000 bond, which, even if met, will not allow Ortiz any contact with her children, her former husband or her current boyfriend. The accused ex-officer will also not be authorised to have any weapon in her possession, including less-than-lethal weapons or any item that resembles a weapon. 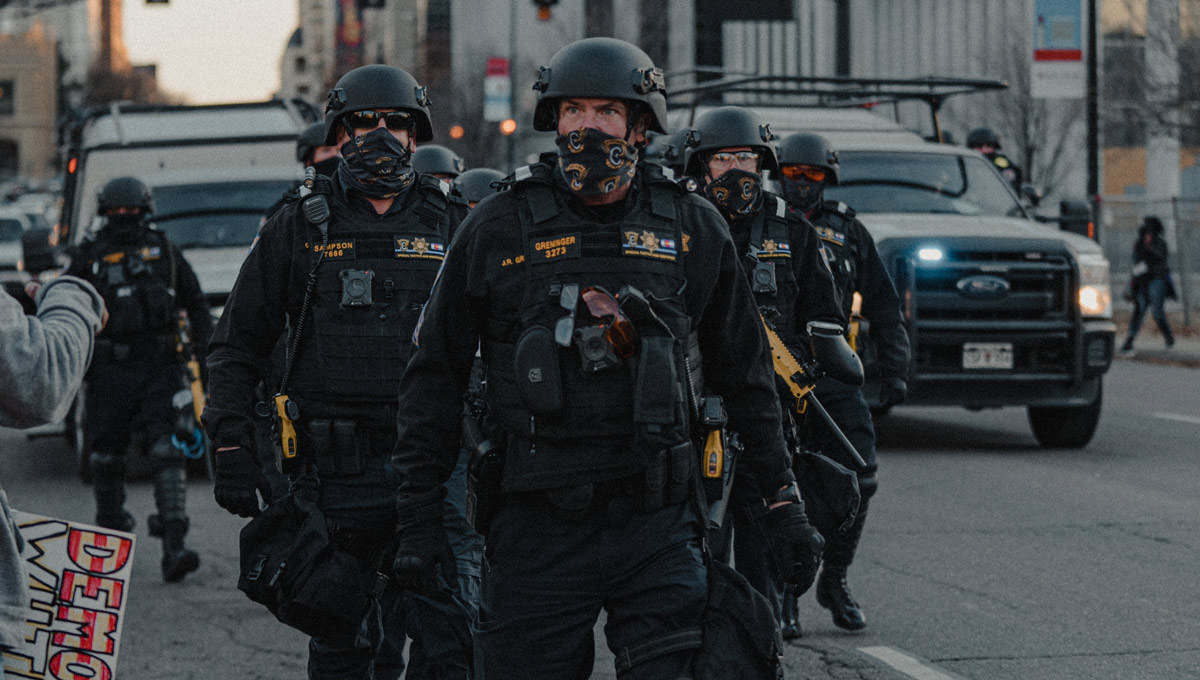 The world is getting hotter, the Earth is getting dimmer and natural systems are going haywire while global health enters a ‘code red’ era. In short, climate change is the new normal, leaving all of us with three options: mitigate, adapt or suffer. On a supposed quest to adapt and prepare for climate disasters, however, local police are stockpiling former tools of war—with few checks on how they are ultimately used.

According to a recent investigation by HuffPost, there has been an explosion in the number of police and sheriffs’ departments citing catastrophic storms, blizzards and floods to justify why they ought to receive military vehicles. Obtaining hundreds of requests for armoured cars written by local agencies to the Defense Department in 2017 and 2018, the publication noted how this trend is a drastic departure from previous years—during which the risk of extreme weather was rarely mentioned.

HuffPost noted the case study of the Johnson County Sheriff’s Office in Iowa, which had gotten hold of a massive mine-resistant vehicle in 2014. At the time, Sheriff Lonny Pulkrabek reassured the sceptical public that officers would primarily use it for extreme weather events in order to save residents from the state’s extraordinary blizzards and floods. “Essentially, it’s really a rescue, recovery and transport vehicle,” he said to the press back then.

Staging the former war machine at last year’s racial justice protests—where officers fired tear gas at peaceful protesters for refusing to disperse—to driving it through a predominantly black neighbourhood to serve arrest warrants, the Iowa City police seems to have used the vehicle for anything but the weather. This outrage spurred the state’s city council members to demand the county to hand the vehicle back to the Pentagon earlier this year. “It is a vehicle made for wartime circumstances, and in my honest opinion, it doesn’t belong here,” council member Janice Weiner told HuffPost.

Why are such requests booming in the first place?

For starters, the US has not invested in large-scale disaster preparedness, forcing local governments and law enforcement to prepare and brace for extraordinary weather while paying for it largely on their own. “But the bigger reason may be that the Defense Department has also started to cue local police and sheriffs to make a big deal out of their role in disaster response,” HuffPost wrote, adding how the Pentagon began to list natural disasters as a citing source on the forms that cops must submit to justify their requests for armoured vehicles.

Several documents obtained by the publication highlighted how local agencies literally ate up this logic—with the police and sheriffs’ departments along the Gulf Coast, from Florida to Georgia to Louisiana, mentioning a “legendary hurricane season” in their states while New Jersey recalled its total incapacitation after 2012’s Hurricane Sandy. “Our resources were quickly overwhelmed and the inability to respond with adequate high water rescue vehicles severely hampered rescue operations,” the chief of police down at Lacey Township, a village in New Jersey’s flood-prone Pine Barrens, wrote in a request for an up-armored Humvee in 2018. When HuffPost reached out for a comment, a deputy for the township said he had no memory of the request.

Then comes a small tweak made to the Pentagon’s 1033 Program last year, where the Congress instructed the Defense Department to give the highest priority to “applications that request vehicles used for disaster-related emergency preparedness, such as high-water rescue vehicles.” The change essentially supercharged the incentives for linking climate disasters to military hardware—even in instances where there doesn’t seem to be any correlation between the two.

While some disaster preparedness experts who spoke to HuffPost hesitated at the idea of flooding the country with even more military vehicles under the excuse of preparing for climate change, others noted how the police are free to use gear from the Pentagon however they want since no one is charged with making sure that they are being used for disaster response in the first place. A niche also pointed out that the police are ultimately responsible for safeguarding the public in the event of a climate catastrophe—and that military vehicles don’t exactly do much to help them prepare for this role.

“I can guarantee you that none of these police departments putting climate or extreme weather down have emergency management plans to use it [that way],” said Leigh Anderson, a Chicago State University researcher and auditor who oversees police departments in Illinois and Missouri. In an interview with HuffPost, she noted how officers in most jurisdictions are underprepared for rescue operations with leadership focusing only on accruing the right equipment.

So, what can be done?

According to Rune Storesund, the executive director of the Center for Catastrophic Risk Management at the University of California, Berkeley, one of the US’s top priorities should be to update infrastructure so that communities can withstand such disasters. This can be achieved t by building neighbourhoods that don’t flood and roads that don’t buckle in the first place. “I’m having a hard time imagining how these military vehicles are directly relatable to climate-related events,” Storesund said.

Note that such vehicles are not entirely useless during natural catastrophes. In terms of extreme weather strikes or hurricanes, the appeal of a truck made to withstand roadside bombs is clear. HuffPost noted the fact that many blast-proof vehicles, such as mine-resistant ambush protected vehicles (MRAPs) can drive over fallen trees, withstand high winds, ford several feet of water and keep going at moderate speeds even if their tires are punctured.

“But an obvious consequence of giving police militarised equipment under the auspices of preparing for natural disasters is that police are free to use it for more pernicious purposes,” the investigation concluded, adding how climate change thereby offers a friendlier explanation for police militarisation at a time when a huge share of the public is angered by police impunity.