Are you a ‘smartphone zombie’? This might be the piece of tech you need – Screen Shot
Deep Dives Level Up Newsletters Saved Articles Challenges 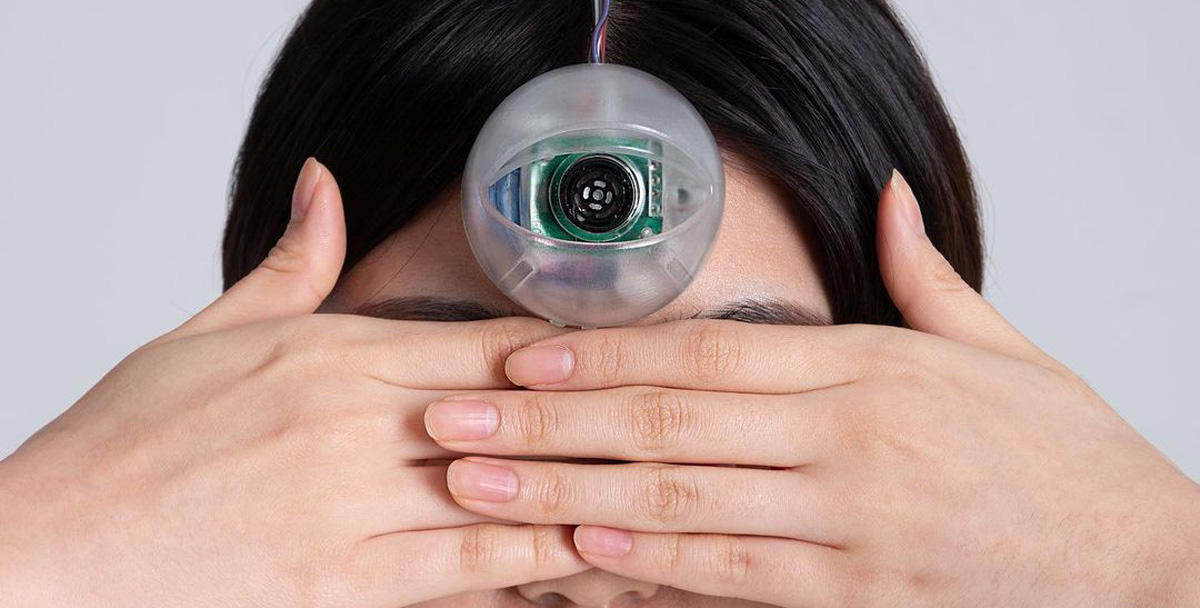 Are you a ‘smartphone zombie’? This might be the piece of tech you need

Minwook Paeng, a 28-year-old postgraduate student in innovation design engineering at the Royal College of Art and Imperial College, has designed the piece of tech that will save us from the shackles of our smartphones. The designer has created a solution to what he describes as “smartphone zombies.” Don’t lie, you know the ones. They’ve probably bumped into you a few times because their eyes were glued to their phone screen. Or maybe it’s you—no judgement here. It might also be me. Sometimes.

Paeng has the fix—a giant robotic eyeball you strap to your forehead. Yeah, you read that right. This just sounds like the beginning of a Black Mirror episode. “This is the look of future mankind with three eyes,” Paeng said in an interview and demonstration of his product with Reuters. Do you think you could rock this look?

Paeng calls it ‘The Third Eye: Evolution to Phono Sapiens.’ The device is designed to prevent “smartphone zombies” from injuring themselves on the go. The promo video on Instagram describes this as “a problem caused by the angle of view. When we look down at the smartphone, we are not able to look forward. So, I evolved to have the ‘third eye’.” But how does it actually work?

The designer explains that the translucent eyelid opens when the wearer’s eyesight is lowered to their phone; the device will beep if the user is within a few metres of an impending obstacle—alerting them of the danger. Once the user lifts their head, the eyelid will close. Paeng’s invention is able to do this through two significant parts. One: a gyro sensor that is able to accurately measure the angle of the wearer’s neck, and two: an ultrasonic sensor that can effectively calculate the distance between an obstacle and the user.

Demonstrating his invention on the streets of Seoul, South Korea, Paeng’s device caught the attention of many pedestrians. One resident, Lee Ok-jo, had this to say about the bizarre look, “I thought he looked like an alien with an eye on his forehead.” However, they expressed a positive attitude to the functionality of the device, “These days many young people can get into accidents while using their mobile phone. This would be good for them.”

If you haven’t realised by now, Paeng’s project is a satirical, intelligent and critical perspective. It so effortlessly dances between its clever design and humorous perspective on our relationship with our smartphones. The designer writes on Instagram, “This project is not just a common product design, but more of an ironic or critical design. Through ‘The Third Eye’, I hope people can criticise our behaviours and rethink about ourselves evolving to Phono Sapiens than resolve the problems we encounter in the present.” He expressed the same sentiments with Reuters, “By presenting this satirical solution, I hope people recognise the severity of their gadget addiction and look back at themselves.” So, you might want to put your phone down for a bit. Well after you finish reading us of course. 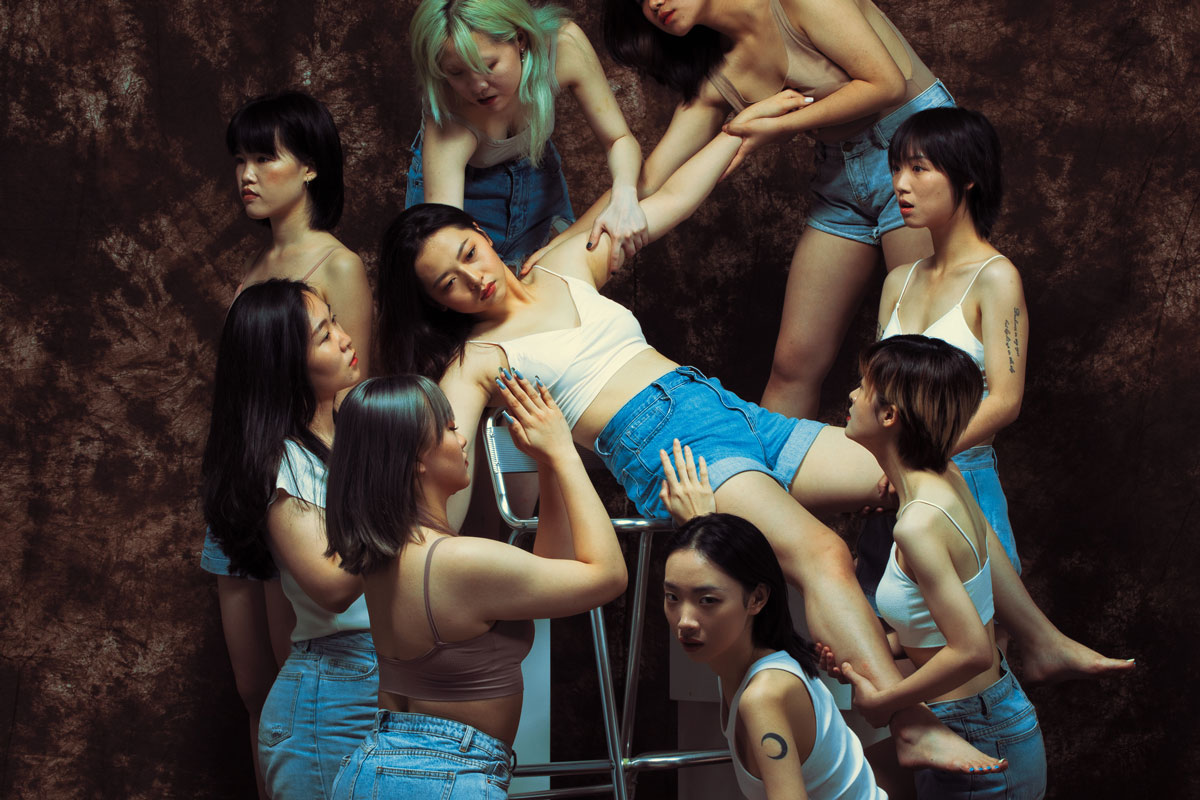 Modern witches explain why tech is the future of witchcraft

It’s no secret by now that witchcraft is having a moment. If your algorithms haven’t led you to #witchtok (the wildly popular TikTok hashtag, which has grown from 6 million to 6 billion views since January), then maybe you’ve seen members of the witchcraft community making headlines for hexing the moon and Donald Trump, among other things.

Young people have long been moving away from organised religion, and towards spirituality and self-care (millennials, I’m looking at you). Now, thousands of gen Zers are becoming witches from their bedrooms. You can see why: the world in 2020 is a messy mix of late-stage capitalism, culture wars and an overwhelming climate crisis. The practice of magic—which involves tapping into the power of nature and the self—feels like both a reaction and an antidote to the world we find ourselves in.

Then there’s that tiny weeny pandemic. More uncertainty and more spare time, which we’ve mostly spent online, looking to cure our existential crises. Witchcraft, it seems, is one of those answers. Make no mistake, magic isn’t new to the internet: witches have been forming online communities since the internet’s inception. But these pockets of Reddit or Tumblr have largely stayed out of public consciousness until now.

This feels different. We are seeing the mass adoption of an ancient spiritual practice happening almost entirely via people’s phones. More than that, this surge of activity in the witch community is spawning entirely new forms of the craft, with new witches harnessing the digital tools that are now just as much a part of our ecosystem as the plants, stones or household objects that have been used historically.

Our devices are undoubtedly a powerful source of energy. Not only are they electronic, but they now process pretty much every thought, feeling, desire, and curiosity that we have. Witches like Nancy (@thehomebrewwitch) are sharing spells that can be cast using technology, while practising ‘techwitch’ Maxine (@spookthespoon) tells me how they “use games such as Minecraft to set up virtual altars, create art pieces based on [their] craft or cast spells,” explaining how “it’s a great way to have fun with your craft” and “can be cheaper and easier for those starting out.” Emojis, meanwhile, have reached their ultimate symbolic potential, being repurposed by many as sigils, which are groups of symbols that are used in spells to represent a desired outcome.

Aryn (@driftwooddreamer), who identifies as a green witch, describes how some tech witches harness electronic energy in their magic using circuit boards to charge their crystals. For her, the use of technology is simply more practical. “Whenever I find medicinal plants that I want to work with I have to memorise where they are, so I use Google Maps. I’ll put a pin that says, like, ‘rosemary’ on the map, so then, whenever I want to find rosemary, I can just look at Google Maps to find the herb I’m looking for.” For identifying plants, instead of carrying books around with her, she uses plant identifier apps like PlantSnap.

Tech is, crucially, the ultimate educational tool. The witchcraft community has a complex past, plagued by oppression, violence and, more recently, racism and cultural appropriation. Having infinite access to information via our phone screens might make it easier to borrow from other cultures, but it also makes education completely non-negotiable. New witches are using the internet to actively work against the spiritual colonialism of previous decades, encouraging each other to educate themselves of the history, nuances and sensitivities of various traditions.

“Google is [a witch’s] best friend,” eclectic witch McKenzie (@mckenzie.limonoff) tells me, and it’s true. There’s infinite Youtube videos and TikToks, Instagram accounts and Reddit feeds, plus a host of Google Classrooms and Discord servers that have been set up by witches to learn and collaborate together. Armed with knowledge, young witches are able to practice respectfully and creatively, carving out their own craft using whatever feels authentic to them.

This joyful emphasis on respect, accessibility and democracy seems to define the mood of the Witchtok generation. Rallying against the pretty gross commercialisation that witchcraft has seen over recent years (see the ‘Starter Witch Kit’ that was created and later cancelled by Sephora after accusations of ‘spiritual theft’), younger witches are championing the resourcefulness of their predecessors, shunning overpriced, over-marketed, mass-manufactured tools and accessories in favour of household objects, local wildlife, and tech.

On social media platforms now, perfectly curated witchcraft content is kept in happy company by practitioners making fun of their improvisations—from the obvious (who needs to buy expensive dried herbs when you can get them in Tesco?), to the less so (pasta for smudging, anyone?)—and whole hashtags dedicated to practising magic on a budget. Many ‘tips for beginners’ posts see practitioners urging new witches to forego expensive tools and instead work with what they’ve got, citing the use of tech, in all its abundance, as a great way to do this. It echoes a wider move away from Instagram’s filters and fakery, into a world of authenticity, spontaneity, and TikTok.

Some witches have found it difficult to accept the new forms of craft that are emerging online. “That’s something that the community is juggling at the moment,” Aryn says, but “technology is a part of human life now, so there’s no need to be old fashioned.” She makes the point that someone had to be the first witch to practice any kind of magic. “Witchcraft is something that works with cosmic or earthly energies and gets results, so what’s to say it’s not valid?”

You only have to look at the amount of energy bursting out from Witchtok, where young people all over the world are sharing spells to aid anxiety or promote self-acceptance, working to educate each other on everything from religion and philosophy to geology and botany, and conspiring to topple capitalism. It’s some kind of magic, that’s for sure.