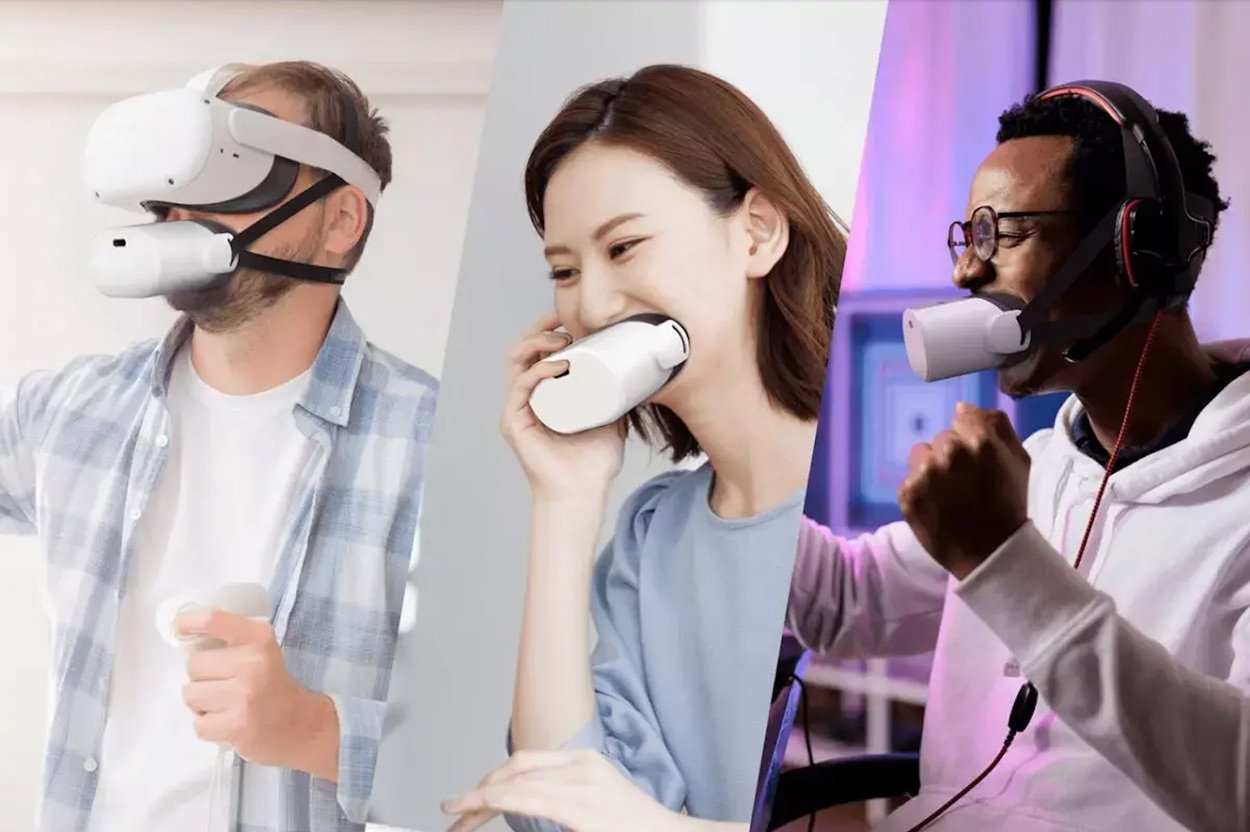 Introducing ‘mutalk’, a new VR device created by Tokyo-based company Shiftall which acts as a mouth muzzle microphone that can capture sound directly from your mouth without the interference of background noise.

According to Shiftall’s website for the odd-looking technology, “the mutalk is a Bluetooth microphone with a mute function that prevents your voice from leaking out.” In other words, the device is designed to allow users in the metaverse to produce a lot of noise without fearing disturbing those around them.

The company goes on to state that the contemporary ‘pear of anguish’ comes with a detachable strap and can also be used for business purposes, such as conference calls. How lovely, a multipurpose netizen’s dream.

Although the main idea behind the mutalk is sound (no pun intended), many have been quick to point out the device’s creepy design and bizarre advertising pictures. Science and tech news publication Futurism described its publicity as “doctored stock images muzzling unsuspecting models with a white VR headset-shaped appendage covering their mouths.”

It should also be noted that Shiftall is owned by tech-giant Panasonic and boasts an impressive catalogue of unique virtual reality products. One of the most, shall we say, special designs is a smart mirror that comes with an equally helpful and daunting ‘benefit’—the ability to spot (and shame) an outfit-repeater.

NeSSA (Never Same Shirt Again) may well be your best friend or your biggest nightmare. The mirror digitally connects to the user’s calendar and, using a smart algorithm, infers from the names of attendees and events whether or not the (un)lucky owner’s current outfit has already been worn in front of the specific person they’re about to meet. If that’s the case, the mirror will automatically activate an inbuilt light feature and “warn” the user.

Thankfully, there are no current plans to collaborate with Amazon’s Alexa—a voice-activated response may be too painful.

Other Shiftall products include: HaritoraX 1.1, a space-saving wireless full-body tracking device and Pebble Feel, a VR experience and technology that allows you to customise and feel temperature preferences within the metaverse.

Virtual reality has continued to develop at great speed over the past few years. In 2020, robotic VR boots that allowed users to walk without actually moving forward made waves as a groundbreaking immersive experience. This technological feat, however, is now considered by many as child’s play in comparison to new products such as mutalk.

It’s both exciting and slightly terrifying to consider what the virtual future will hold. 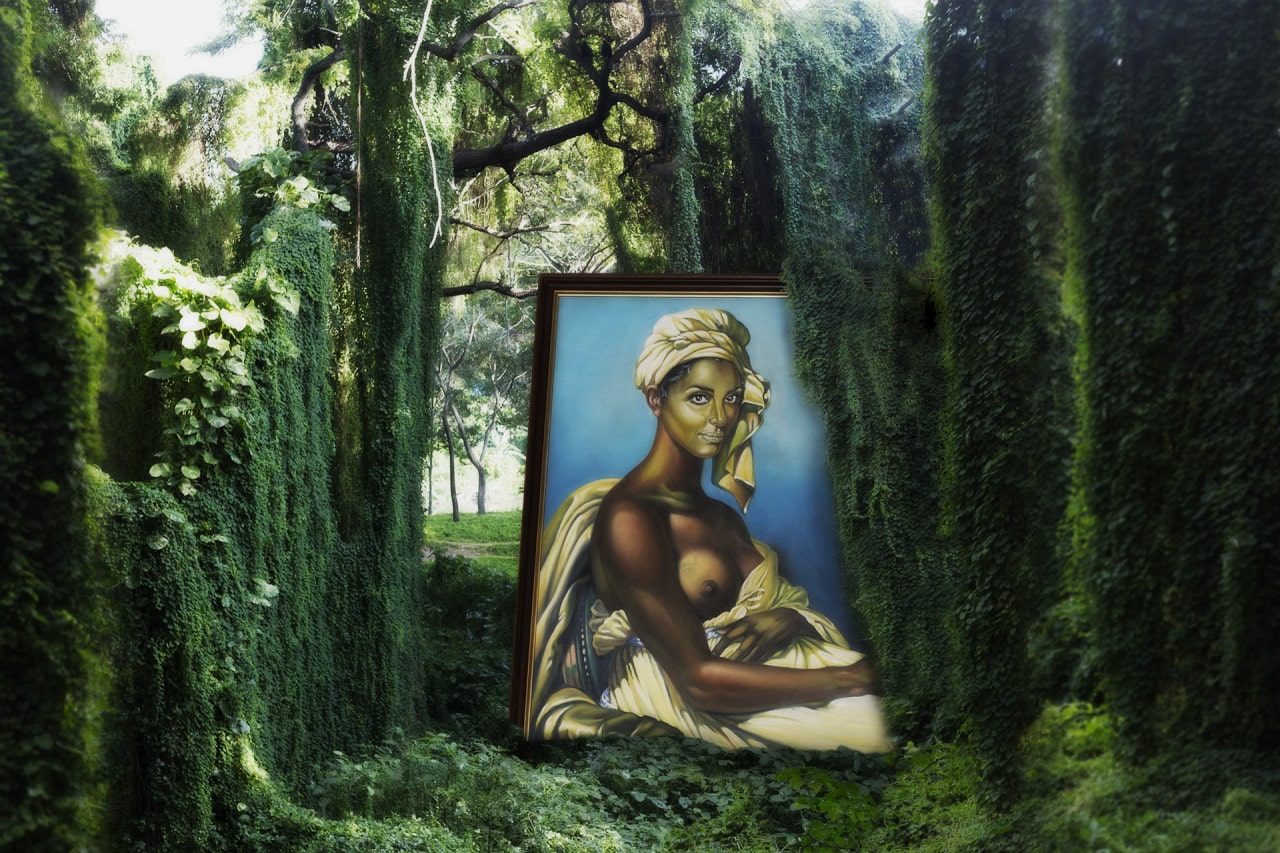 The past year has seen an increase in global mobilization around feminist causes and the promotion of women’s rights. Alas, despite some notable victories in courts and legislatures, women across the world remain vulnerable to violence, oppression, discrimination, and violation of their rights—including the right to control their body.

Women of colour in predominantly white societies appear to suffer even more greatly from discrimination, as in addition to prevalent misogyny they have to contend with deep-rooted racial biases that limit their access to opportunities available to white women. In other words, minority women have yet another layer of prejudice they must obliterate in order to achieve genuine equality, whether in education, employment, or visibility on the political stage.

A creative attempt at tackling this problem comes from Debias VR, a tech company founded by Clorama Dorvilias and her business partner Jessica Outlaw that focuses on eliminating bias from the classroom environment. Dorvilias and Outlaw have developed a VR game called Teacher’s Lens, which uses interactive and immersive learning experiences in order to encourage educators to become aware of and ultimately transcend their gender and race biases.

Dorvilias and Outlaw cite various studies which indicate that in particular subjects (primarily STEM), teachers tend to favour male students, discourage girls from participating, and have generally lower expectations from students of colour. Dorvilias, a woman of colour herself, has also drawn her own experience with biased professors who discouraged her from embarking on a career in the tech industry in order to develop a tool that exposes and remedies classroom inequalities.

Teacher’s Lens provides educators with a VR headset which simulates the experience of a teacher conducting a class to a diverse group of students. Throughout the simulation, teachers are presented with various scenarios which potentially point out their subconscious biases, such as which student they’re inclined to call on first, discipline, etc. “Black and Latino students are disciplined at higher rates and tracked into AP courses at lower rates so it would be good if people would start making decisions based on data and examine some underlying structural issues,” said Outlaw in an interview for Motherboard.

One of the primary goals of Dorvilias and Outlaw is to remove all shame and guilt aspects from the process of debiasing, as the two note that often people are left with a considerable amount of pent-up resentment following a diversity training. “Bias training shouldn’t be there to shame,” Dorvilias tells Motherboard, “People should feel good about making others feel accepted. Debias isn’t something that you can work out in a day. It’s a behaviour that you have to work through. We want to give people the capacity to work in a safe and comfortable space.”

It appears that an initiative such as Teacher’s Lens may very well achieve this by simulating an environment that is truly engaging. As opposed to being lectured, educators who enroll in the programme have an opportunity to tap into their often subconscious thought-processes and experience in real-time the scope and nature of their bias. Furthermore, unlike many lecture-based diversity trainings, Teacher’s Lens uses personalised data that is accessible at all times and thus helps people monitor and track their progress over time, which encourages educators to make a real change in their approach.

What we often fail to acknowledge is that the damaging effects of racial and gender-based prejudice reverberate far beyond the walls of the classroom or office, and permeate all aspects of our lives. A society that is molded upon pillars of bias ultimately does an immense disservice to all its members. As stated by Dorvilias, “It affects society and our economy as a whole when you draw the line on what you think a person is capable of doing based on how they look. What limitations are we placing on society and our innovation when people in power put a cap on who gets to succeed and who doesn’t?”

Could technology be harnessed to promote genuine equality between the sexes and races? Dorvilias seems pretty convinced that it could, “The nature of VR has limits to it. Until people try it, they won’t really understand why it’s so powerful. Once they try it, they’re transformed.”

This article was published as part of an ongoing partnership between Screen Shot and Fair Planet.