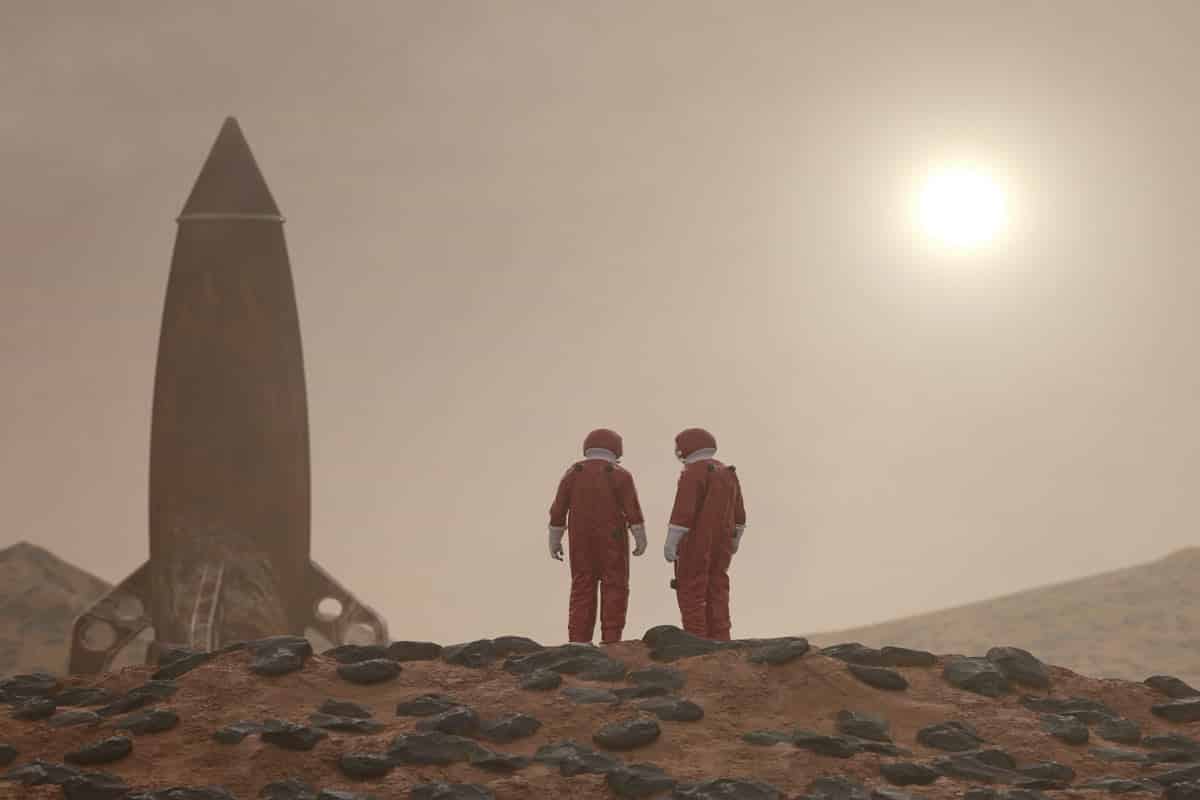 A possible solution for building on Mars was right under our noses all along—or rather, under our skin. Doctor Aled D. Roberts, from the Future Biomanufacturing Research Hub, has announced perhaps the gnarliest scientific proposition to date: using human blood as glue for Mars dust… As the proverbial phrase goes, ‘you can’t get blood out of stone’, but you can get it out of a human. Science has never been so hardcore.

Like many scientific discoveries, the idea of using human blood for creating Martian structures was not deliberate—it was stumbled upon. Roberts’ background is in chemistry with a PhD from Liverpool University, Singapore. He’s now based in Manchester where he focuses on the interface of materials chemistry, material science and biotechnology. It was there that his team were honing their scientific minds on using spider silk as a substitute for glue. “It was an accident really. In one of our controlled experiments we found that a protein from cow blood was very good at sticking grass together,” Roberts told Screen Shot.

Obviously, it’s not feasible to ship a rocket full of cows into space—although, given the recent rise in billionaire space antics, it’s only a matter of time until that happens. The alternative? Human blood. As Roberts stated, “Humans also produce this protein which can be used to stick together Moon dust, Mars dust or sand—and any space mission which is crewed would have humans present.”

The basis of the paper, published in the journal Materials Today Bio, found that human blood protein compared with both Moon dust and Mars dust created a very strong, concrete-like material. “We found how it was sticking together, and based on our understanding found that compounding this with Urea (from human urine) increased the effect of the bonding mechanism,” Roberts added.

No, we won’t be seeing human blood farms on Mars

So, whenever humans do populate Mars, will human blood be the glue that holds our extra-terrestrial cities together? Unfortunately not. As all great scientists should do, Roberts delivers a healthy dose of realism into this sci-fi-esque scenario: “The best it would probably be used for is motor or to stick sandbags together.”

However, that doesn’t mean it’s not “incredibly useful to research and understand.” Between Mars and Earth, there is a significant delay in communications. Roberts noted how “it can take around 40 minutes for communication between the two planets. If the astronauts are in a life-threatening emergency, they would essentially have to fend for themselves. It’s useful to know that they could potentially make strong hard materials using their own blood and urine.”

Although, as metal as it might be to make structures out of human blood, Roberts indicated how there could be alternative ways to create the ‘glue’ which holds elements together too. “It doesn’t have to be human blood. We can, potentially, make synthetic proteins if we advance to a point where we can do that on Mars. Or, we could use similar proteins from plants—like teas or soybeans—and genetically engineer them to produce sticky proteins. That way they could be used as a food source or for glue as well.”

The team’s rather “tongue-in-cheek” study has boiled some blood—admittedly from people who have misunderstood the premise of the research altogether. Roberts shared that “some people have taken it seriously, thinking we’ll be farming and exploiting people: using them like cattle for resources. It’s unethical to even consider doing that—I don’t think it’d be realistic to have humans sucked up to machines to build huge buildings. This is more theoretical. It’s to help astronauts understand that it is an option in a hypothetical emergency situation.”

The influence it can have on Earth

So we won’t be seeing human blood farms on Mars, although that would be an incredibly sci-novel premise—aspiring authors looking for new inspiration, you can thank me later. Despite this, the research does have significant implications for life back down on Earth. Roberts explained how often space technologies, however outlandish they may first appear, have a “trickle-down effect” which eventually influences our advancement on Earth.

“If you’re an investor and want to build something on the Moon or Mars you can’t have any extra weight—everything you make has to be sustainable,” he noted, and for Earth—as the planet continues to warm, oceans rise and waste builds—we need to become more sustainable.

Concrete, for example, uses 8 per cent of global greenhouse gas carbon dioxide emissions. Roberts believes his research could help us find a valuable alternative. “This is just the start, we could potentially further develop this concept into a technique which uses plant-based proteins or other sustainable resources. This could help us find a relatively low carbon alternative for construction materials like cement, tiles, all that kind of stuff.”

Despite how it may appear at first glance, this scientific discovery is far from a gimmick. We’ve only scratched the surface of what this technological advancement could bring to society. Although our great mission to colonise Mars has been the initial focal point of this research, it has a huge potential for life down on Earth too. Who knows, maybe in a few decades time we’ll all be living in houses made of plant blood… Only time will tell. 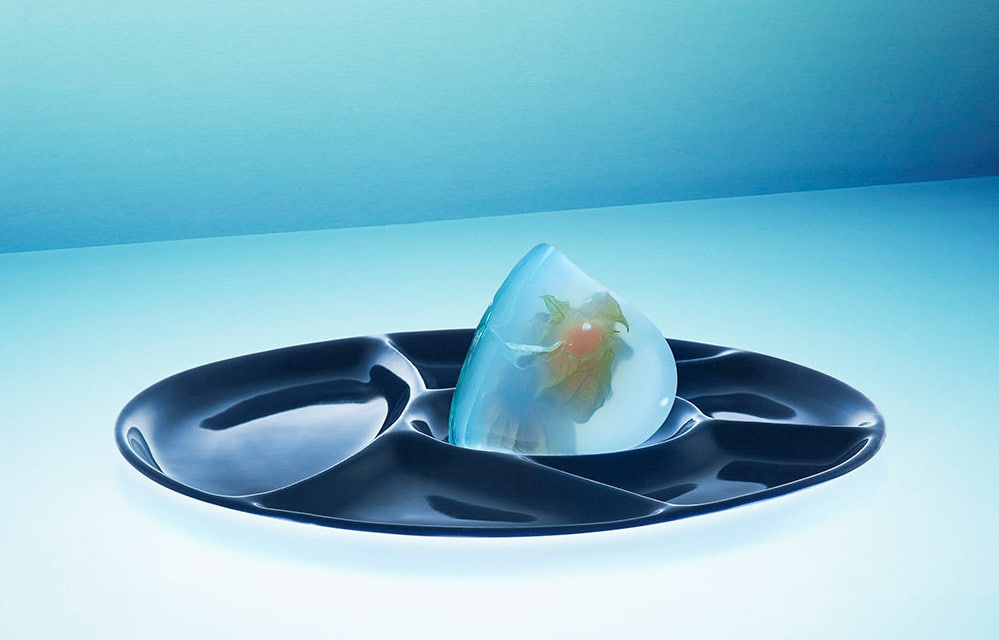 NASA Mars rover is launching today. Here’s everything you need to know

NASA is gearing up to send the next solar powered SUV-sized rover named Perseverance, or ‘Percy’ for short, to Mars. This is the fifth rover ever to be sent to Mars, and it’s unlike any other that has gone before. Costing $2.4 billion, the vehicle has been specifically designed to collect video and audio as well as search for remains of potentially ancient microbial life—it also has the first spacecraft of its kind tucked neatly away in its belly, a helicopter called Ingenuity.

It is planned for the rover to drop the helicopter off, back away and watch as the newly born space explorer begins testing its flight. If successful, it will be the first controlled flight ever to be conducted on another planet, and may entirely change the way robots and humans explore these rocky enigmas in future—but the thin Martian air has just 1 per cent of the density that we have here on Earth, which makes flying extremely difficult.

MiMi Aung, the leader of the helicopter project at NASA states that “The first and foremost challenge is to make a vehicle that’s light enough to be lifted.” With all that responsibility, Ingenuity weighs just 4 pounds.

The little helicopter has four carbon-fiber blades, which are arranged into two rotors that spin at 2.400 revolutions per minute in opposite directions. These rotor blades have to be much larger and spin much faster than what would be required to lift a vehicle compared to our own atmosphere.

Perseverance and Ingenuity are two separate missions in one. While Ingenuity finds its wind, Percy the rover will be busy too—it is going to be carrying an experimental device that converts carbon dioxide from the atmosphere into oxygen, as well as test five samples of spacesuit materials, including a piece of helmet visor, to see how well they endure Mar’s radioactivity. Perseverance will also be collecting data that could facilitate the prediction of weather on Mars, which is crucial to human survival on the planet.

The spacecrafts, although separate, will still be a team—two cameras on the underside of Ingenuity, one filming in black and white, the other one in colour, will be capturing footage of the surface below while Perseverance will be on the lookout with its own set of cameras, so that they can record each other. Inception, much?

“Imagine looking from Perseverance out at a helicopter that is flying around Perseverance, and the helicopter is looking back at Perseverance getting us images of what Perseverance is doing,” NASA Administrator Jim Bridenstine said. “We’re going to be able to see with our own eyes, with motion pictures, these kind of activities happening on another world.”

Everything so far is ready to launch, but anything could happen and there is only a slim window when this launch can be possible, which comes around every two years when Mars and Earth are closest to each other as they orbit around the sun. If NASA can’t launch today, there are opportunities to launch every day up until 17 August. But after that, the agency must wait until 2022 to try again. Fingers crossed though, as this mission may be the turning point of our futures in space.