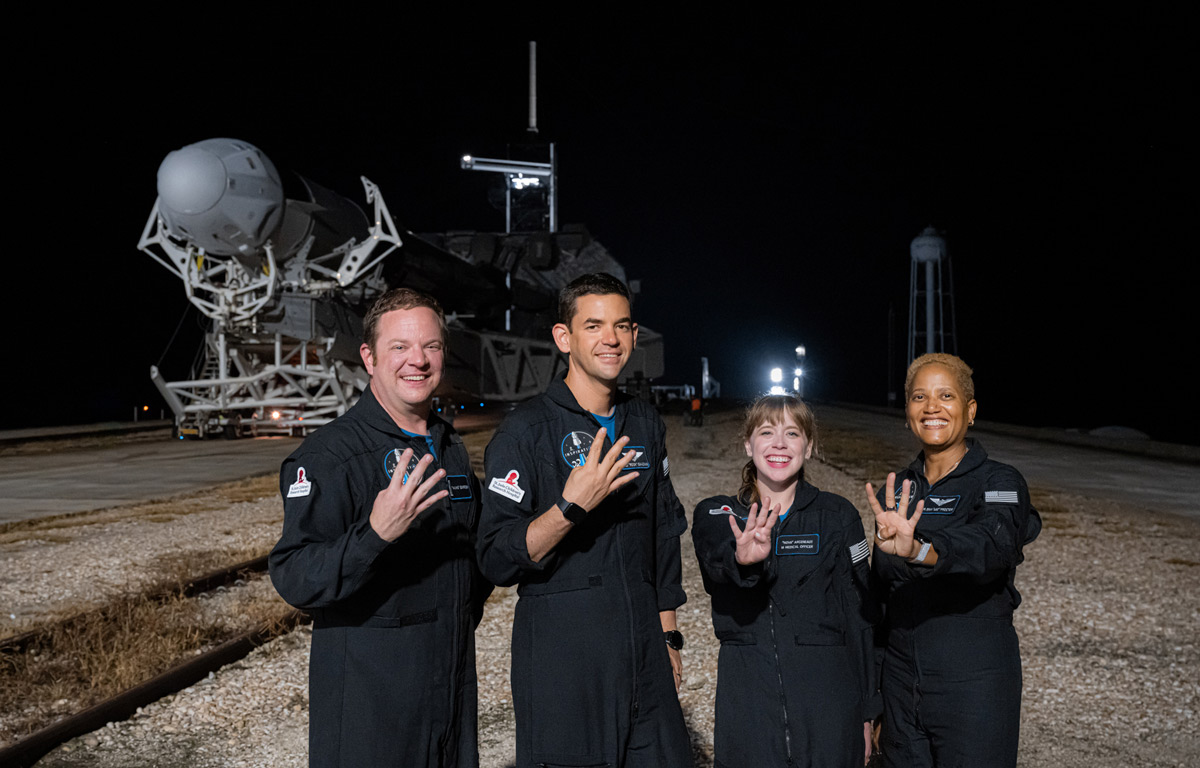 SpaceX—Elon Musk’s company—is set to launch four people into space this Wednesday (15 September) on a three-day mission that is the first ever to orbit the Earth with exclusively private citizens on board. The ‘Inspiration4’ mission concludes a summer that saw billionaires Richard Branson and Jeff Bezos make it to space, on Virgin Galactic and Blue Origin spaceships respectively, a few days apart in July.

The crew of Inspiration4 have undergone rigorous training to prepare them for a voyage around the Earth. And thanks to the mission’s financial backer, billionaire entrepreneur Jared Isaacman, they will fly much higher, faster and further than both Branson and Bezos.

The mission itself is far more ambitious in scope than the few weightless minutes Virgin Galactic and Blue Origin customers can buy. The SpaceX rocket will be flying further than the orbit of the International Space Station (ISS). “The risk is not zero,” said Isaacman in an episode of a Netflix documentary about the mission. “You’re riding a rocket at 17,500 miles (28,000 kilometres) per hour around the Earth. In that kind of environment there’s risk,” he continued.

SpaceX has already given no fewer than ten astronauts rides to the ISS on behalf of NASA—but this will be the first time it’s taking non-professional astronauts. While no price has been revealed for the mission, a single launch of one of SpaceX’s reusable Falcon 9 rockets is believed to cost around $50 million—well within the reach of Isaacman, who has also splashed out on Super Bowl adverts for the mission.

Lift-off is scheduled for Wednesday at 8:00 pm Eastern Time (ET) from launch pad 39A, at NASA’s Kennedy Center in Florida, at which the Apollo missions to the Moon took off. In addition to Isaacman, who is the mission commander, three non-public figures were selected for the voyage. Each crew member was picked to represent a pillar of the mission.

The youngest, Hayley Arceneaux, is a childhood bone cancer survivor, who represents “hope.” She will become the first person with a prosthetic to go to space. The 29-year-old was picked because of her work as a Physician Assistant in Memphis for St. Jude’s Hospital, the charitable beneficiary of Inspiration4.

Former US Air Force veteran Chris Sembroski, 42, secured the seat of “generosity.” The last seat represents “prosperity” and was offered to Sian Proctor, a 51-year-old Earth science professor who, in 2009, narrowly missed out on becoming a NASA astronaut. She will be only the fourth African American woman to go to space.

Over the three days of orbit, the crew’s sleep, heart rate, blood and cognitive abilities will be analysed. Tests will be carried out before and after the flight to study the effect of the trip on their body. The idea is to accumulate data for future missions with private passengers.

Although space travel remains for the moment only partially open to a privileged few, the stated goal of the mission is to make space accessible for more people. “In all of human history, fewer than 600 humans have reached space,” said Isaacman. “We are proud that our flight will help influence all those who will travel after us.” 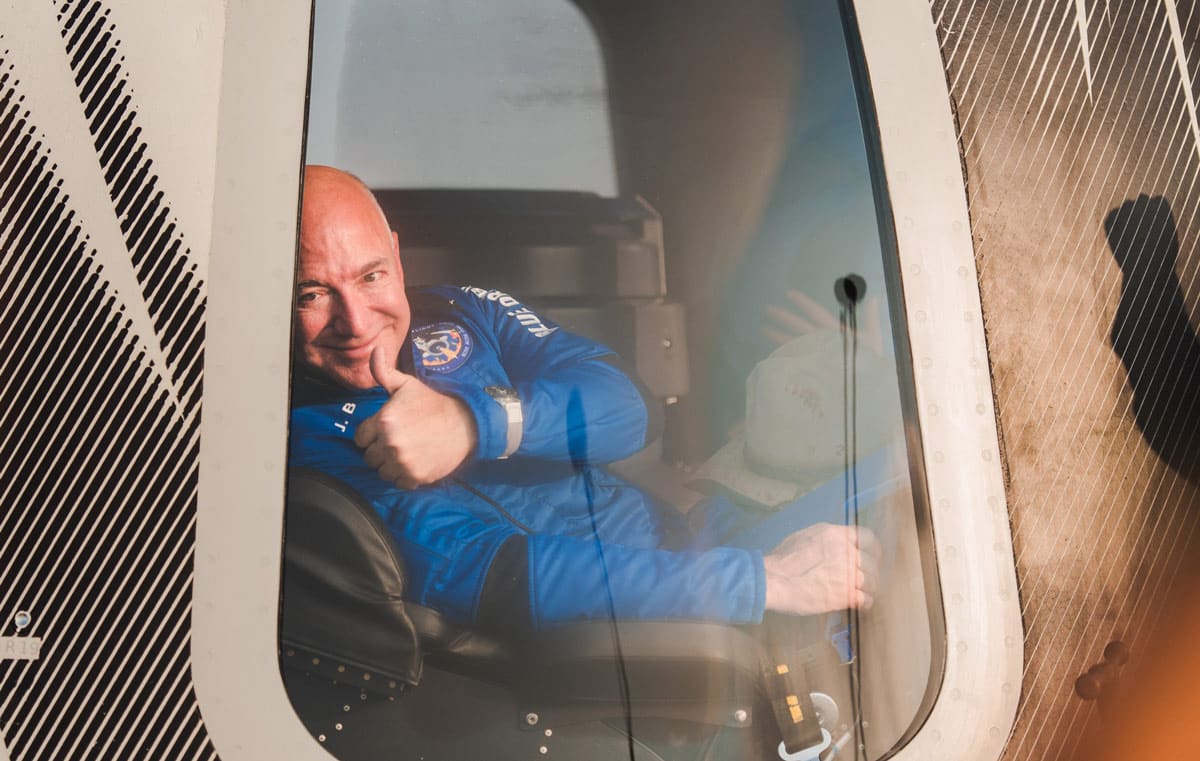 Former Amazon CEO and not-so astronaut Jeff Bezos would rather trouble the US space agency with legal battles than see another moon landing involving one of his rivals. This time, we’re talking about his tech bro entrepreneur Elon Musk. According to the BBC, the row stems from a decision in April to hand the deal to one company—not two as initially expected—because of a funding shortfall.

At the time of the award, NASA’s human exploration chief, Kathy Lueders, admitted that the space agency’s current budget precluded it from selecting two companies. That was after Congress granted it only $850 million out of the $3.3 billion it had requested for the project.

NASA also cited the proven record of orbital missions by Elon Musk’s SpaceX firm as a factor, resulting in the award. Cost is also thought to have played a role: SpaceX’s bid was the lowest-priced by some distance.

Deeply wounded by this ‘injustice’, Bezos then penned a ridiculously puerile open letter to NASA essentially calling out its decision while simultaneously offering to ostensibly bribe the judges with $2.9 billion (£2.1 billion) in subsidies, among other promises.

Shortly after this, Bezos filed a complaint with the US Government Accountability Office (GAO), delaying the project while the organisation adjudicated the matter. Following the GAO’s recent denial of Bezos’ issues, he and Blue Origin have moved for federal courts to intercede on grounds of “NASA’s unlawful and improper evaluation of proposals submitted under the HLS Option A BAA.”

In a court filing on Friday 13 August, Blue Origin said it continued to believe that two providers were needed to build the landing system, which will carry astronauts down to the Moon’s surface as early as 2024. “We firmly believe that the issues identified in this procurement and its outcomes must be addressed to restore fairness, create competition and ensure a safe return to the Moon for America,” Blue Origin added.

NASA must now file a response to the legal action by 12 October. Meanwhile, SpaceX is yet to comment on the lawsuit. Under its Artemis programme, NASA hopes to return humans to the moon for the first time since 1972.

In April, Lueders said, “This critical step puts humanity on a path to sustainable lunar exploration and keeps our eyes on missions farther into the solar system, including Mars.” Yes, but now Bezos is in the way.