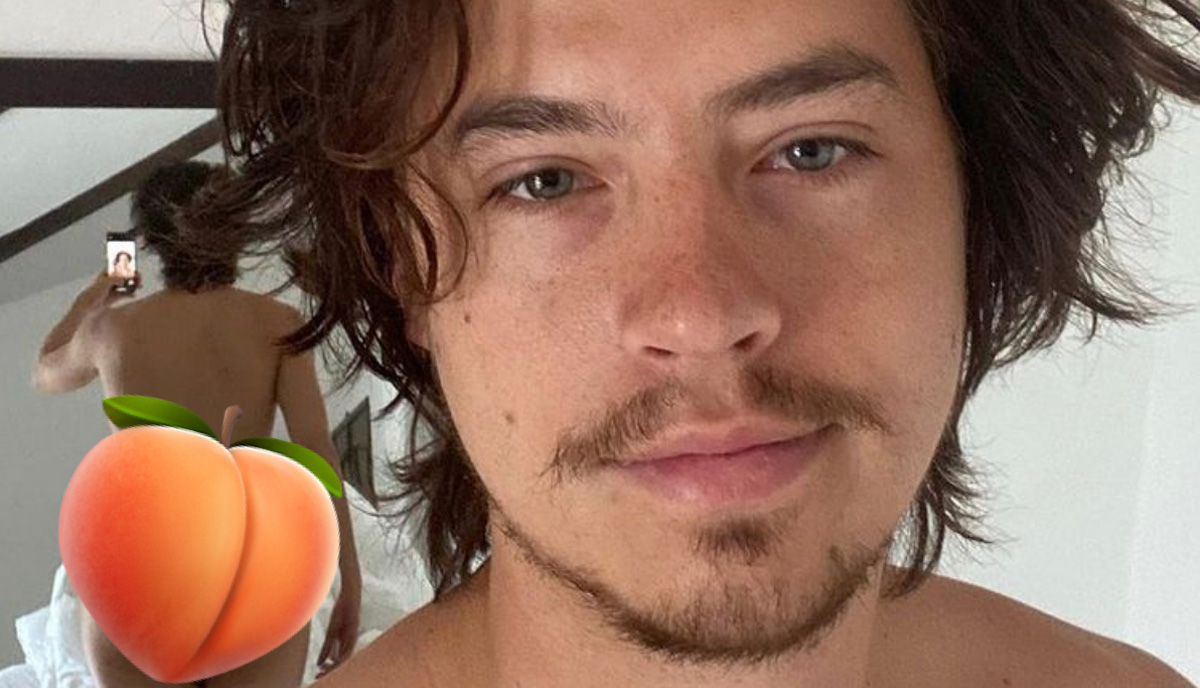 The picture, which was shared on Instagram and currently has over 4.5 million likes, was accompanied by a caption that read, “Good morning to my publicity team.” It’s clear that Sprouse, who spoke up about his experience as a Disney child actor back in April, aimed to make waves with this risqué selfie.

As expected, the Photoshopped picture—which was enhanced to give the Riverdale actor a rounder tushy—sent the internet into a frenzy, with many netizens wasting no time on creating some of the most hilarious memes we’ve ever seen.

Even Sprouse’s girlfriend, model Ari Fournier, gave her honest thoughts in the post’s comments section by asking “🌞how long until this gets taken down.” Meanwhile, the actor’s Moonshot co-star Mason Gooding also chimed in, writing, “Hate to see you go, love to watch u leave.”

“Best thing u ever publicized,” singer King Princess said. “Cole and the giant peach,” another user added. If we’re being honest, there simply are too many amazing comments to list them all here—with more and more getting added as we speak. We instead recommend you check them out for yourself.

While we won’t be delving too deeply into other people who (quite literally) made Sprouse the butt of the joke under his Instagram post, we will be sharing with you some of the best memes and reactions that have graced the internet following the already iconic picture.

I, as much as any young zillenial, love my 2000s shows. From fashion inspo in That’s So Raven and endless shower concerts with Hannah Montana to the knowledge that it’s okay to speak to myself everyday from Lizzie McGuire, I was truly in my pop culture lane as a kid. One show that stands out in particular, among the girl-centric catalogue that Disney especially built up for the little tween me, was The Suite Life of Zack & Cody and its two twin stars in the making: Dylan and Cole Sprouse. The sitcom rocked my world, making me dead set on wanting to spend my life in a hotel forever—playing around with bellhops and teasing a manager long enough for them to shout the famous phrase “no running in my lobby.”

Recently, however, it has come to light that the film industry leaves no prisoners—even child actors as young as 11 apparently—as Cole Sprouse (the twin whose secondary Instagram snaps strangers who sneakily try to get a shot of him) has spoken out about the heavy crown child stars bear from a young age on the silver screen. You may also know Sprouse if you’re a Friends fanatic, as he played Ross’ son on the show, but he actually got his big break alongside Adam Sandler and his brother Dylan in Big Daddy.

In a recent interview with The New York Times (NYT) on Monday 4 April, aptly titled Cole Sprouse on Finding a Healthy Balance in Hollywood, the now 29-year-old Riverdale star opened up about the “toll that fame takes” and the immense trauma child stars undergo upon reflection. Sprouse also shed light on his journey from his days as a tiny tot in the three-season run of The Suite Life of Zack & Cody, aged 11, and his career post playing the brainiac brother.

Munching on a chicken wrap and puffing on a vape pen, Sprouse “spoke about billionaires, the effects of childhood fame and turning 30.” Reflecting on the celebrity, the NYT article covered Sprouse’s highs and lows as a junior in Hollywood, ​​and how “by age 18, [both he and his brother were] effectively burned out.”

After his time at New York University, and a swanking degree in archaeology, Sprouse was ready to call it quits on showbiz. It was by chance that the promise he made to his manager “to give one more round of TV auditions a go before quitting the industry for good,” landed Sprouse back in the belly of the beast—as Jughead Jones on everyone’s favourite, artistically-excellent and revered CW show Riverdale. Once he booked the role as the “brooding outcast,” he was promptly “sucked in again,” the article mentioned.

“I started acting when I was so young that I hadn’t actually attempted, as an adult, to think about if I really enjoyed performance,” Sprouse shared.

However, his experiences could not compare to that of young female stars at Disney Channel. Unfortunately, the brunted burden fell on the shoulders of his female counterparts and co-stars who were “heavily sexualised” from an earlier age than he and his brother by the network. “When we talk about child stars going nuts, what we’re not actually talking about is how fame is a trauma,” Sprouse continued.

“I’m violently defensive against people who mock some of the young women who were on [Disney Channel] when I was younger because I don’t feel like it adequately comprehends the humanity of that experience and what it takes to recover,” the actor said.

On the verge of turning 30, Sprouse shared, “​​I feel like my ducks are in a row better than they’ve ever been.” While we live in the era of reboots, the actor doesn’t think he’ll go back to his hotel escapade days again. “I don’t think I’ll ever return to [The Suite Life of Zack & Cody].” Divulging on the reasons behind his decision, he said “I’m just a big believer that if something is beautiful in the past, you should let it stay beautiful. To bring it into the future feels a bit like reheating a really good, fresh meal in the microwave.” All in favour, say ‘Aye’.

Luckily enough for Sprouse—and the rest of us—he cut the cord on some fans’ hopes of seeing him as a 30-year-old actor in their favourite high school shows. “And, I hate to break it to everybody, I’m not the only 30-year-old playing a teen on television,” he concluded. Sprouse recently appeared in HBO Max’s sci-fi romance film Moonshot, alongside Lana Condor and Emily Rudd in March 2022.