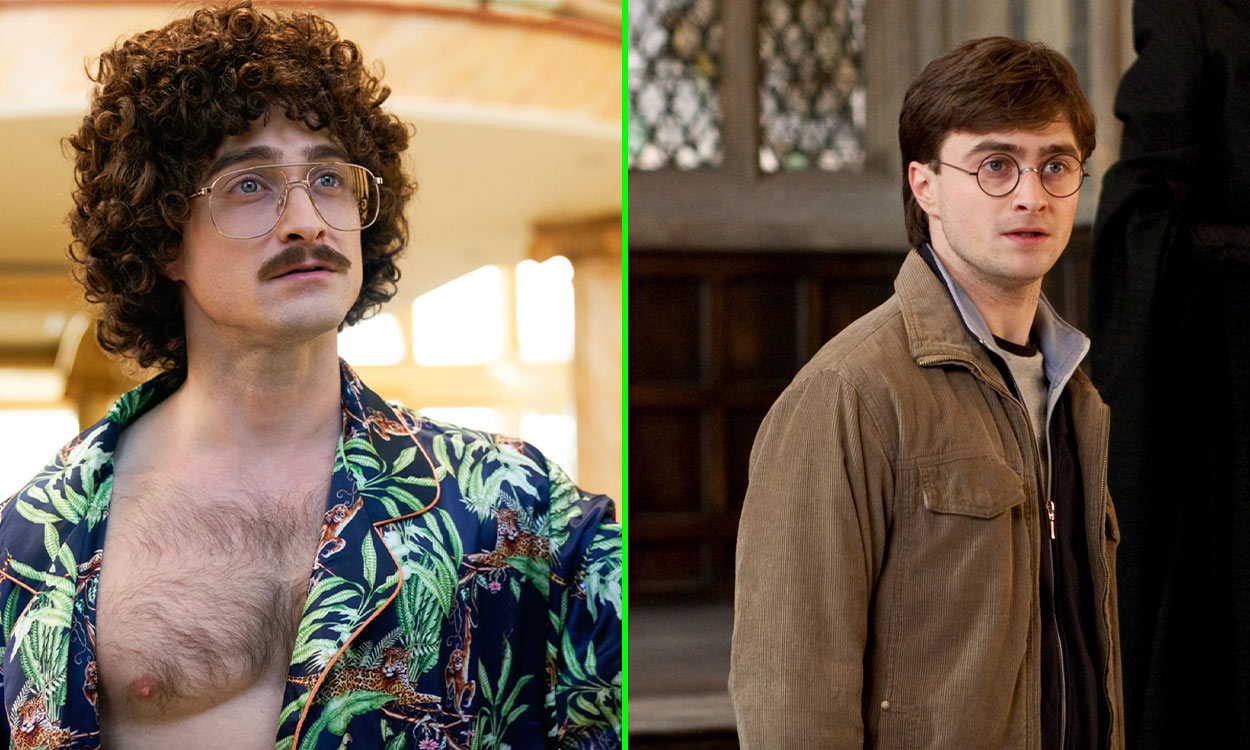 This week witnesses the release of the hotly-tipped biopic of legendary mock musician “Weird Al” Yankovic, starring none other than Daniel Radcliffe as the man himself. If you thought casting ‘The Boy Who Lived’ as the same bloke responsible for giving us humour-filled hits like ‘Eat It’, ‘White and Nerdy’ and ‘Amish Paradise’ was an odd choice, you’re not alone. However, the former Harry Potter star has built up a pretty impressive track record for finding weird and wonderful ways to spend his time since he hung up his wand back in 2011.

Don’t believe us? Check these out…

How do you follow up playing everybody’s favourite boy wizard? By playing a constantly-farting corpse, obvs. In 2016, Radcliffe starred in Daniel Scheinert and Daniel Kwan’s batshit-yet-surprisingly-tender comedy Swiss Army Man, a film about a guy that’s desperate to run away from his problems and soon finds himself stranded on a mysterious island.

When a dead body washes ashore, it’s not long before he finds himself talking to it and, pretty soon, the pair are best buds—hanging out, joking around, and working out a way to return to civilisation. Spoiler alert: it involves using Radcliffe’s lifeless body as a fart-powered jet ski, naturally.

Harry Potter… but if he had handguns stapled to his hands. That’s the elevator pitch for 2020’s Guns Akimbo, a film packed with video game vibes that sees a secret evil organisation known as ‘Skism’ pit criminals against psychopaths and livestream their balls-to-the-wall deathmatches for all to see.

When mild-mannered Miles (played by Radcliffe) inadvertently gets pulled into this seedy underworld, he must try his best to save his girlfriend from criminals and survive this crazy situation with his life and dignity intact—all while having shooters strapped to his mitts. Chock full of action and perfectly skewed at Monster Energy Drink-guzzling gamers worldwide, it’s one of Radcliffe’s most colourfully-weird role choices so far.

Don’t you just hate it when you wake up and find that you’ve grown a pair of gnarled, twisty, goat horns on your forehead? It’s even worse when these new noggin accessories also let you hear the depraved, deep, dark secrets of everyone you come into contact with and also regularly attract snakes, right?

Radcliffe finds himself in this exact, weirdly-specific situation in 2014’s low-key horror Horns. Adapted from a story by Stephen King’s son, horror writer Joe Hill, this deceptively simple yet incredibly creepy mystery was one of Radcliffe’s first features following his eight-movie stint as Harry Potter—playing a guy who’s suspect number one in his girlfriend’s rape and murder. However, when a pair of devil accessories appear on his head, his new supernatural abilities help him uncover the truth about his partner’s case.

The world of Netflix’s ace, joke-a-minute comedy Unbreakable Kimmy Schmidt is strange enough as it is—but for the show’s 2020 interactive TV movie Kimmy Vs The Reverend, Radcliffe climbed aboard to help make things even more delightfully bizarre. For those who missed it, the series follows the eponymous Kimmy (Ellie Kemper), a perpetually optimistic former mole woman who spent 15 years trapped in an underground bunker controlled by a bearded madman named The Reverend (Jon Hamm).

Heading to New York following her release, this pick-your-own-path special saw Radcliffe star as Kimmy’s royal husband-to-be, Prince Frederick Eurythmics Bono Windsor, who is 12th in line to the throne—or 11th, if it turns out his uncle is mostly corgi, as is rumoured. Full of spit-take funny lines and loads of visual gags, Radcliffe is a welcome addition to Kimmy’s colourfully upbeat world.

Radcliffe’s randomness isn’t purely limited to his acting roles. Remember back in 2014, when he surprised everyone with his previously-unknown ability to spit Blackalicious’ tongue-twisting tune ‘Alphabet Aerobics’ in its entirety, without missing a letter or fluffing one single line?

This now-iconic moment from one of the UK’s most constantly-surprising actors appeared during a trip to The Late Show with Jimmy Fallon. After professing his lifelong love for Eminem, the Harry Potter star went on to tell Fallon about his fascination with learning how to recite lyrically complex and speedily-delivered songs. After this, it didn’t take much convincing for him to step out in front of the show’s live audience and deliver a pitch-perfect rendition of the iconic track.

Who knew Radcliffe could be so funny? Most of us found out when he appeared in the second series of Ricky Gervais and Stephen Merchant’s excellent follow-up to The Office in 2006. Before Gervais started specialising in cloying Netflix shows about grief and weirdly trans-focused stand-up bits, he and Merchant funnelled their newfound famous friendships earned after their stint in Slough into a show that let them work seamlessly alongside big names—while retaining their everyman personas.

A teenage Radcliffe appeared as the star of an episode that saw Gervais’ character Andy working on a suspiciously Potter-esque fantasy epic, where he proceeded to steal every scene he was in. From bragging about cigarettes to messing with his only condom (“Can I have my johnny back?”), it proved that he can bring the funny.

Determined to distance himself from Hogwarts by any means necessary, 2016’s chilling thriller Imperium saw Radcliffe go about as far from the Wizarding World as possible to tell a tale focusing on the dark side of humanity.

Shaving his head and wearing his finest frown throughout, Radcliffe starred as an undercover FBI agent who must worm his way inside a dangerous white supremacist, Neo-Nazi cell in America in order to try and stop a potential terrorist attack. Directed by Daniel Ragussis and inspired by a handful of real experiences, Imperium is one of the more nail-biting, gritty, and depressingly-real offerings from Radcliffe’s cinematic oeuvre so far.

Radcliffe’s 2017 mud-soaked drama Jungle may be one of his more underappreciated movies. Inspired by Israeli adventurer Yossi Ghinsberg’s often-harrowing real-life experiences of surviving in remote spots, Radcliffe plays Ghinsberg as a young man, determined to leave civilisation behind and embrace a life of unexpected exploits in the big wild world.

After being convinced to head into the heart of the Amazon rainforest with a group of fellow adventurers, it’s not long before Ghinsberg’s luck changes, forcing him and his group of trekkers to rely on their wits to survive in a very wild jungle. A film full of bugs, mud, foot sores, and monkey for dinner, Radcliffe puts it all on the line to deliver a powerful turn as a guy forced to do whatever it takes to survive.

The problem with trying your best to pick the weirdest roles possible? Not all of them are going to connect. In fact, some of them might end up being flat-out stinkers. Unfortunately, that was the case for 2015’s horror Victor Frankenstein, a film that saw Radcliffe reimagine the classic role of Igor, loyal assistant to the monster-creating Dr. Frankenstein.

Forget the familiar hump-backed image this character immediately brings to mind though—Radcliffe’s Igor cuts an unexpectedly sleek figure, complete with a mane of long, dark hair. Unfortunately, things don’t stay preened for long. As his time spent working with James McAvoy’s Frankenstein get more intense, the struggles of reanimating the dead take their toll, eventually transforming Radcliffe’s Igor into the hunched figure synonymous with the character. Not that anyone saw it mind. Victor Frankenstein only wracked up 26 per cent on Rotten Tomatoes. Ouch.

So far, we’ve seen Radcliffe play a flatulent corpse, a Neo-Nazi, a fake prince, and a guy with pistols for hands—but what we haven’t seen him do is step into the shoes of a classic movie villain. Luckily, all that changed with 2021’s mainstream action adventure The Lost City.

Starring alongside Sandra Bullock and Channing Tatum, Radcliffe shrugs off his nice-guy Potter persona and instead embraces his inner James Bond villain—smirking and grand-planning his way through an explosive, stunt-filled, quip-heavy flick that sees him play Abigail Fairfax, an eccentric billionaire obsessed with finding a lost city of gold. A relative box-office success, the film capitalised on the fertile ground of plonking this well-known face into a role that’s a million miles away from his wizarding days. Here’s to more like this movie. 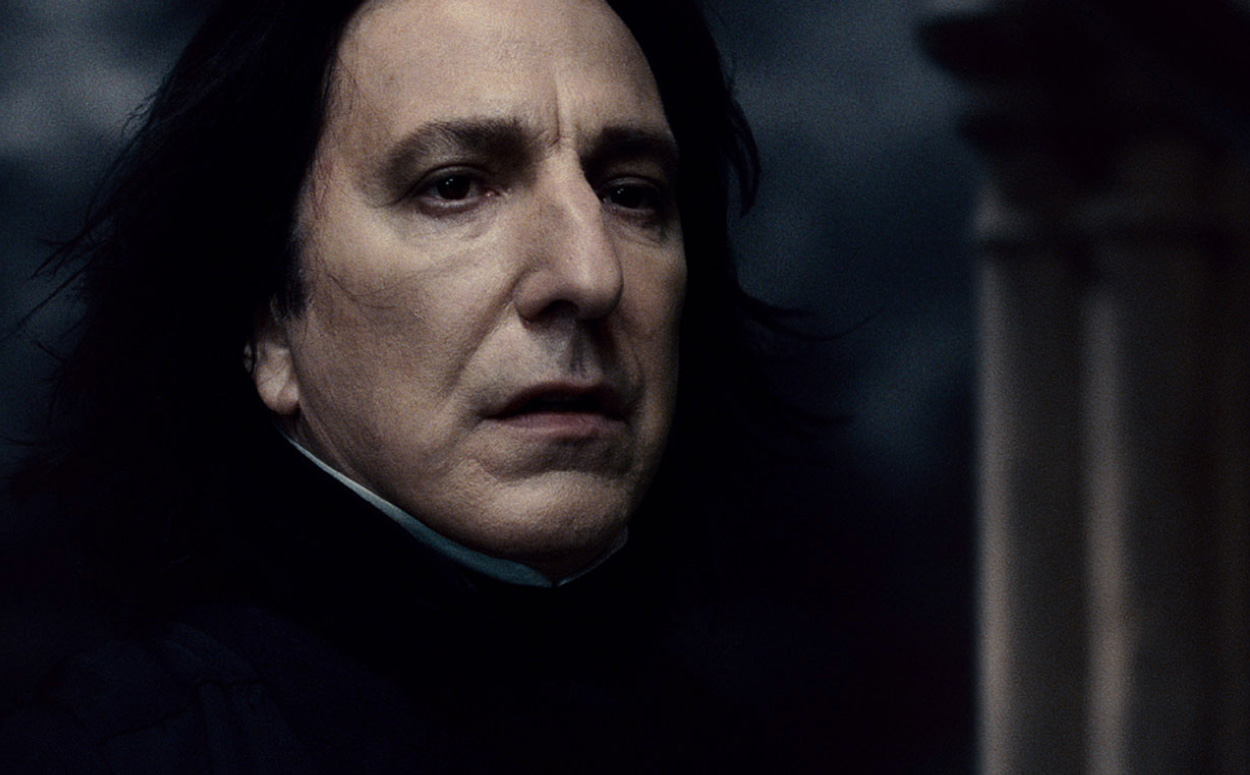 Ahead of its release in October 2022, excerpts from the book Madly Deeply: The Diaries of Alan Rickman have been shared by The Guardian on Saturday 24 September, including some of the late actor’s entries in his secret journals.

Among many insights into the movie industry and the different characters Rickman played in his lifetime were some mentions of what most people would probably deem his iconic role: the sarcastic yet beloved Professor Severus Snape in JK Rowling’s Harry Potter series.

But before we give you all the goss on your favourite wizards, and why, in the end, Rickman decided to keep his role in the movie franchise, it’s important we clarify the reason behind the Die Hard villain questioning it all in the first place.

For those of you who have been living under a rock, Rickman died in January 2016 in London at the age of 69 after quietly fighting prostate cancer, which he was first diagnosed with in 2005. This meant that the actor still had to film four more Harry Potter movies while fighting the disease—a highly difficult feat that understandably required him to think twice about it.

Nonetheless, shortly after being diagnosed, Rickman agreed to return to film Harry Potter and the Order of the Phoenix as Professor Snape. According to his journals, in January 2006, the actor had received treatment and undergone a procedure to have his prostate removed. “Remembering nothing but with that painkiller high in the recovery room,” he wrote at the time.

Yet, in a journal entry dated 30 January 2006, he penned: “Finally, yes to HP 5. The sensation is neither up nor down. The argument that wins is the one that says: ‘See it through. It’s your story’.”

Only a couple of months later however, Rickman seemed to suggest that both his cancer and his moody character were taking a toll on his personal behaviour on set, writing on 12 April, “I realise as soon as that [Snape’s] ring and costume go on—something happens. It becomes alien to be chatty, smiley, open. The character narrows me down, tightens me up. Not good qualities on a film set. I have never been less communicative with a crew. Fortunately, Dan [Radcliffe] fills that role with ease and charm. And youth.”

An entry from 27 July 2007 shed light on the actor’s thoughts after he finished the last Harry Potter book, “… I have finished reading the last Harry Potter book. Snape dies heroically, Potter describes him to his children as one of the bravest men he ever knew and calls his son Albus Severus. This was a genuine rite of passage. One small piece of information from Jo Rowling seven years ago—Snape loved Lily—gave me a cliff edge to hang on to.”

Then, on 14 January 2010, Rickman put into words how he felt after filming the very last scene of Professor Snape: his death. “Here I am with Dan, Emma and Rupert 10 (?) years on (Emma is here on a break from Brown University), blood all over my throat from an imagined Nagini [Voldemort’s pet snake], the three of them still with furrowed brows and panting a bit,” he wrote.

“Finding it hard to remember any particular scenes over the years mainly because all the decisions are taken in committee rooms and not on the floor. We listen as DY [director David Yates] tells us what we are thinking and why (and in some cases recounts the story… ) and a small piece of something creative caves in.”