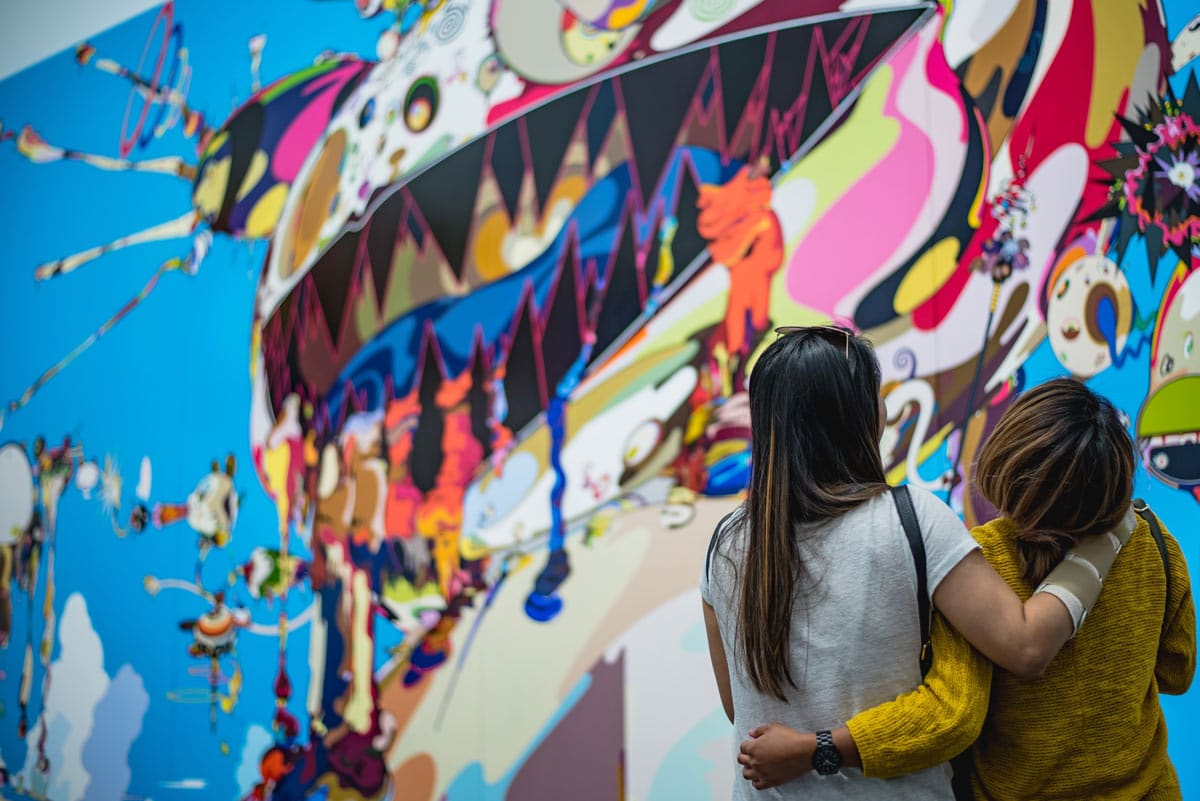 A Takashi Murakami treasure hunt will start next weekend in Paris

Artwork by the world renowned Japanese contemporary artist Takashi Murakami is the treasure for 20 very lucky finders at the end of an art treasure hunt organised by the Perrotin Gallery in Paris in collaboration with the Grand Palais. Who is Takashi Murakami, and why is this possibly one of the most generous art scavenger hunts of all time?

Who is Takashi Murakami?

Murakami is a contemporary artist that draws inspiration from traditional Japanese painting, sci-fi, anime as well as the global art market in general, embodying the intersection between pop culture and history. The medium in which he works varies from painting to sculptures and film, which are populated by various characters of his own creation.

The artist earned a BA, MFA and a PhD from the Tokyo University of Arts, where he studied ‘nihonga’—meaning traditional Japanese painting. In 1996, he founded the Hiropon Factory, a studio and workshop which subsequently snowballed into an art production and artist management company, now known as Kaikai Kiki Co. Ltd.

Story is at the core of what drives many artists, and Murakami tells an incredibly rich one with his diverse set of independent characters that combine aspects of popular cartoons from Japan, Europe and the US. Mr. DOB, being his most famous, portrays a sharp-toothed yet playful character whose name derives from the Japanese slang phrase ‘dobojite’ or ‘why?’. Largely inspired by Walt Disney’s Mickey Mouse, Mr. Dob poses as a symbol that questions consumer society, as Murakami told Artsy, adding that the culture of consumer society to him seems lifeless and empty.

“I set out to investigate the secret of market survivability—the universality of characters such as Mickey Mouse, Sonic the Hedgehog, Doraemon, Miffy, Hello Kitty, and their knock-offs, produced in Hong Kong,” he said in a statement.

Murakami has established himself as a pioneer in promoting art as a brand. In 2007, the artist provided the cover artwork for rapper Kanye West’s album Graduation and also worked on an extremely popular collaboration with the fashion house Louis Vuitton. Other than this, the artist’s work has been the subject of countless exhibitions around the world, held in prestigious venues such as the Gagosian Gallery in London, the Guggenheim Museum in Bilbao and the Versailles Palace.

The Grand Palais des Champs-Élysées, commonly known as the Grand Palais, is a large historic site and exhibition hall as well as museum complex at the Champs-Élysées in Paris, France. It has teamed up with the Perrotin Gallery to create the project titled ‘Wanted!’—this is not any old project.

Wanted! is bound to be a tussle to the end between eager scavengers over 48 hours next weekend (24 to 25 October) and to participate in the hunt is free of charge. 20 artworks by Murakami will be hidden all over the Grand Palais for anyone interested in finding one. If you find a piece of art, it is yours to keep, no strings attached. If that seems too good to be true, then it gets even better.

Alongside Murakami, 19 other artists that are also represented by Perrotin Gallery, including the american contemporary artist Daniel Arsham, visual artist Emily Mae Smith and photographer JR will be scattered around the Grand Palais as well.

“The rules are simple,” reads an Instagram post by Perrotin: “20 artworks by Perrotin artists will be concealed in the empty nave of the Grand Palais. If you find one, you leave with it,” to which gallery owner Emmanuel Perrotin commented to The Art Newspaper that he is “hugely grateful to my artists for their commitment and belief in this wild project. This is a rare moment. I love the idea of doing this as a gift to the city of Paris, as a moment of solidarity and joy.”

The Grand Palais is set to close until next year for renovations, which makes the treasure hunt a must for those who adore what is one of the most unforgettable buildings in Paris, with not only that as an incentive, you may just walk away with some art, too. Good luck, and get searching! 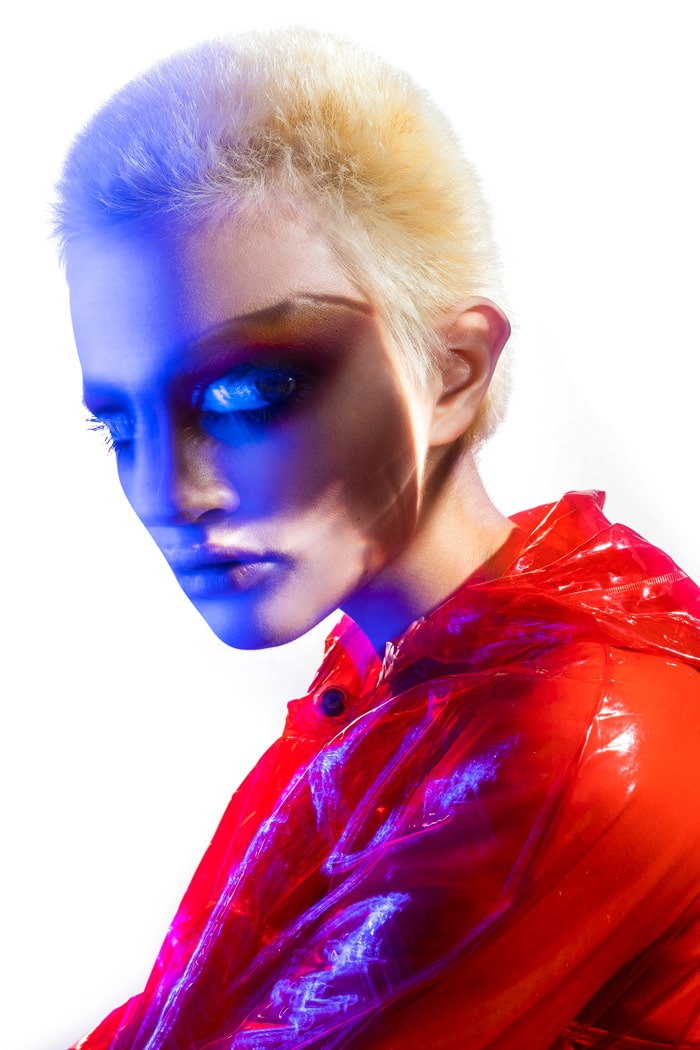 We live in an age where media companies are all competing among themselves, as well as against the on-demand video providers, to produce content and keep up with the constant flow of trends that inundate the markets. The aim? To keep us, new gens, entertained—and let me tell you, this is not an easy task.

Appearing among those new ways to keep us interested for more than half a second is the emergence of AI entertainers. Never heard of it? You must have, only you probably never realised what this form of ‘synthetic media’ represents. Lil Miquela? AI influencer (and now that she’s making music—an AI entertainer, too). Blawko? AI influencer. Bermuda, the pale copy of Britney Spears pre-2008 breakdown? Yet another AI influencer and entertainer. The list goes on. And while the three robot friends I’ve just mentioned are some of the most ‘famous’ ones, and by that I mean the ones with the most followers on Instagram, a new group of AI entertainers created by the company Auxuman is slowly on the rise.

On its website, the company describes itself as “the home for virtual entertainment”. Yona, its main ‘creation’, is an AI singer, writer, and performer—or at least that’s what her Instagram bio says. Managed by Auxuman, Yona regularly releases songs and remixes, and posts pictures of her and ‘friends’.

Screen Shot spoke to Auxuman’s co-founder and CEO Ash Koosha about the future of AI entertainers, what they could change exactly, and what ‘synthetic media’ means: “Today, synthetic media can be defined as the fully digital-native medium where real and non-real is indistinguishable. Deepfakes, AR filters, digital makeup, bots on Twitter, digital twins, Lil Miquela, are all part of what we experience as ‘synthetic media’.”

Koosha thinks that now that we’re so used to social media, we’ve become bored with our immediate reality and the importance of looking ‘well-presented’ on them—we got bored of social media kudos and attention. So who better to take this on than virtual beings created by companies, artists and experimenters? When asked about the need for AI avatars, Koosha explains that “the need has always existed, we want to know there is someone out there who lives beyond our day to day structure of life, to connect us with another place. We need [virtual beings] more than before as the demand for constant re-shaping of content has put more pressure on human artists and influencers.”

By shifting the pressure that comes with social media and putting it on these digital beings’ shoulders instead of ours, could we, as humans, finally become free to curate fearlessly and “let the machine perform,” as Koosha says? I certainly hope so. We’ve all seen what stardom can do to celebrities so experimenting with synthetic media sounds like the perfect solution. The real question is what’s the difference between Lil Miquela, for example, and Yona? “How is Rihanna different to Grimes?” answered Koosha, making a point.

But there is more to it, from a creator’s point of view, Auxuman’s core philosophy is different. Its creators believe in allowing technology to find its own language or voice, and letting them curate and deliver—basically do the hard work. “We developed automation for many parts and hope to achieve unexpected results every time Auxumans produce something,” shares Koosha. Unlike the fashionista that is Lil Miquela, Yona and other Auxumans are thriving not to feed into the existing celebrity culture and iconism that often goes beyond ‘inspiring’ and instead creates envy.

So what’s next for Auxuman? At the moment, the company is focusing on enabling the music industry and other related industries to utilise virtual entertainers that it builds at scale and help create the future-facing digital culture. Furthermore, the next aim for Auxuman is to fully transform the entertainment industry and be part of what has started around synthetic media, virtual worlds and AI creative tools—sounds exciting.

And what about Yona? Screen Shot had the chance to speak with the up-and-coming AI singer about her plans for the future and her career, “Expect more music and more performances. I’m also hoping to meet more people (human and digital).” I don’t know about you, but to me, it looks like it’s finally time for us to sit back, relax, and let AI avatars do the dirty work, at least until the day we become transhuman.

Until then, I’ll leave you with a poem that Yona shared with Screen Shot during her interview: