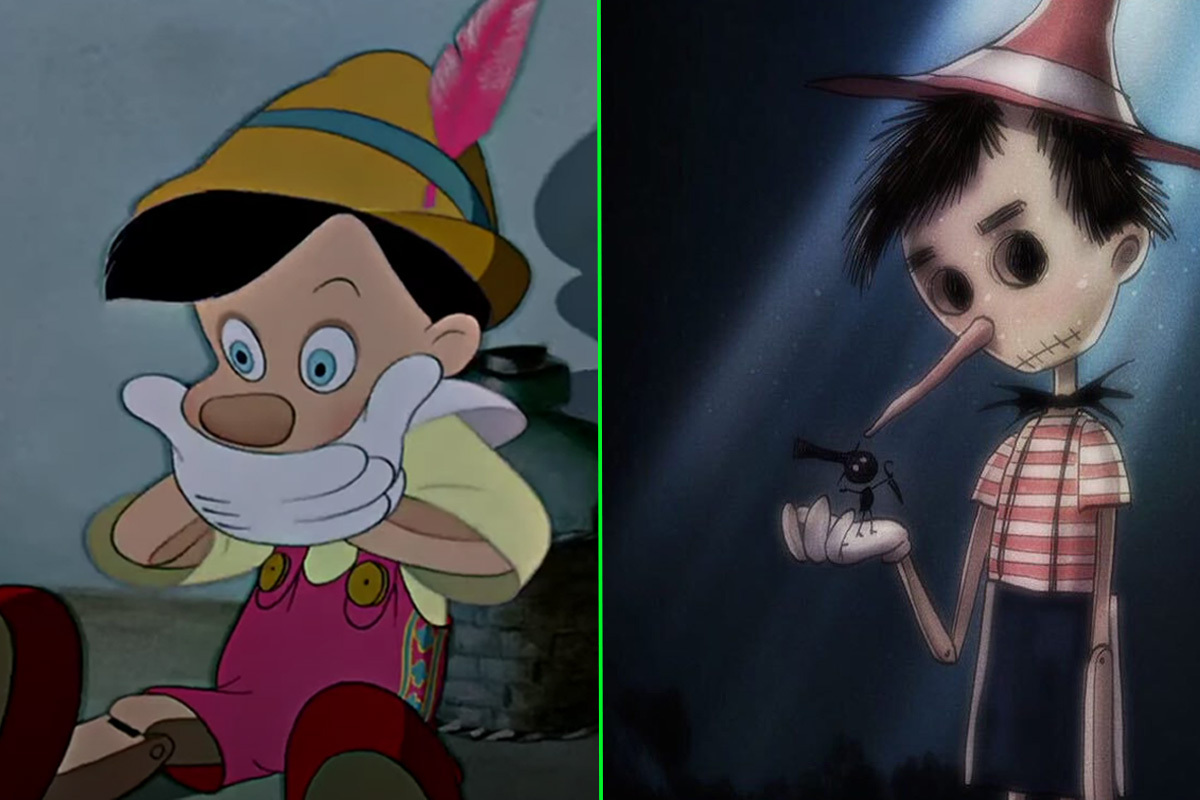 Disney characters are famous the world over, from Snow White and Dumbo to Belle and Simba, these animated icons have made our childhoods magical. But artist Andrew Tarusov saw these loveable characters and thought “What if I made them… spooky?” And not just any kind of spooky, oh no, Tarusov took it to the next level and gave these legends the Tim Burton treatment. Drawn in his unmistakable style, let’s take a look at some of Tarusov’s mind blowing masterpieces.

1. The Beauty and the Beast

A tale as old as time is now a tale to be told in the dark, as Tarusov’s rendition of The Beauty and the Beast depicts a hulking, hairy beast looming behind a ghostly, concerned-looking Belle. A simple illustration but the piercing white eyes of the beast among its pitch black silhouette says it all.

If The Lion King took place in The Nightmare Before Christmas universe, this would be the result. A rather adorable-looking Simba held aloft against a gigantic moon on Jack Skelington’s iconic curly cliff, this is a film I’d pay to watch.

From under the sea and into our nightmares, The Little Mermaid has never looked so creepy. A spindly-looking Sebastian and a disturbing Flounder join Ariel in the depths of the ocean. Those with thalassophobia, look away, now.

Next up is Aladdin and from the look in their eyes, both Aladdin and Jasmine have just about seen enough of the world. And is it just me or does Aladdin look suspiciously like Gomez Addams to you? It’s the moustache. Definitely the moustache.

It looks like Sleeping Beauty has taken a wrong turn and ended up in Frankenstein’s laboratory in this Disney remix. Donning some yellow rubber gloves and operating some rather sinister-looking machinery, somehow I don’t think the prince will be breaking Aurora’s curse with a kiss…

Everyone’s favourite baby deer is looking more like an anthropomorphic Slender Man rather than a magical woodland creature here. And honestly? I’m here for it.

If I wasn’t having nightmares before, I certainly will be now. Looking like a possessed puppet from the Annabelle universe, if this thing suddenly moved on its own and told me it was a real boy, the whole house is burning down. Nope, no thanks.

Admittedly, this one had the potential to be a lot darker, but it has ended up looking like a pet-focused spin-off of The Addams Family and let’s be real, Pongo, Perdita and their puppies look absolutely adorable.

Yet another nightmare-inducing image, Tarusov has gone above and beyond with this one. Dumbo’s thousand-yard stare looks straight into your soul, and you know what they say: “if you gaze into the abyss, the abyss gazes also into you.”

Surrounded by her woodland friends—albeit some unconventional ones in this instance—Snow White looks like she would lure you into the forest and you’d never be seen again. The exaggerated, distorted silhouettes of the forest animals elevates this piece to that sweet spot of spookiness. You’ve done Mr Burton proud, Tarusov.

Introducing Nikocado Avocado, the YouTuber slowly killing himself for views 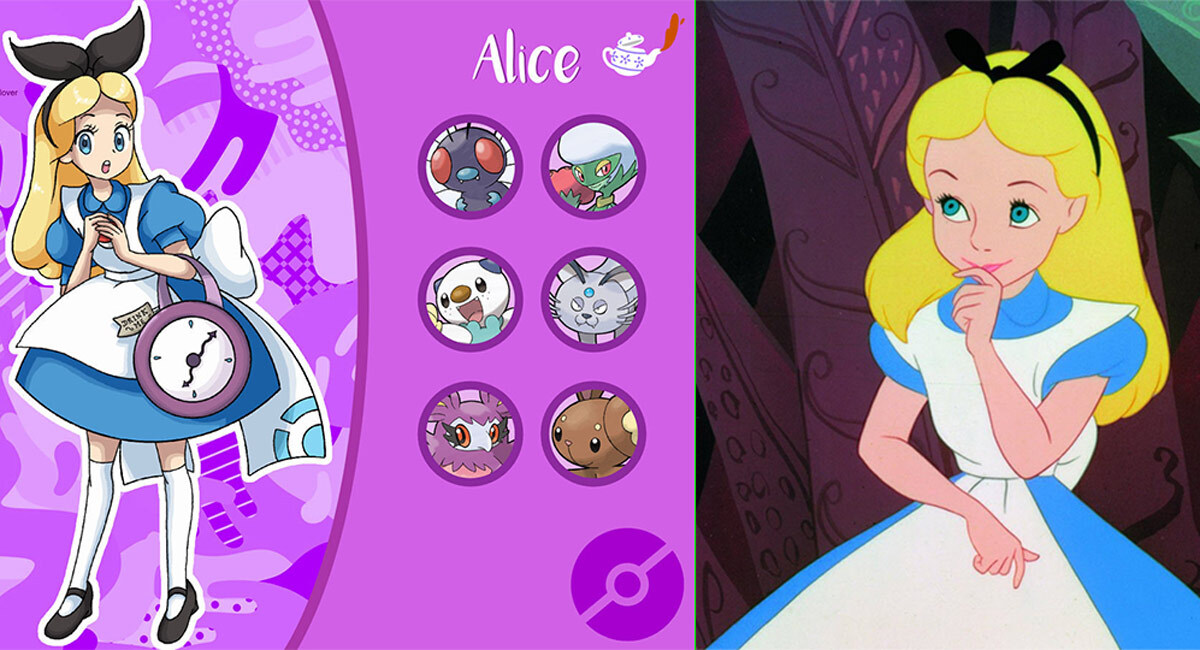 From AI-generated cartoon characters to creepy, human-like 3D sculptures, the internet is full of fun takes on cartoons. But have you ever wondered what it would be like if your favourite movies or games invaded each other’s worlds? Imagine if Final Fantasy VII’s Cloud Strife turned up in a Mario game? Or the cast of the Avengers showed up in Adventure Time? What about Disney princesses in  Pokémon? Well, look no further as we’ve got you covered. Devianart artist Pavlover has reimagined Disney characters (princesses, princes and villains alike) as Pokémon trainers and even came up with what their team of critters would be based on their powers, personalities and loyal animals that tag along on their adventures. Join us as we guide you through 10 of our favourite mash-ups. Disney-Pokémon TV show, when?

This adorable take on Mulan would make for a perfect Gym Leader (strong trainers in the Pokémon world). The clever use of Drampa, the placid Pokémon or Gyarados, the atrocious Pokémon as the iconic Mushu, and Kricketot as Cri-Kee make her team fit her perfectly. No dishonour on Mulan or her cow here.

Sticky sweet and boasting a Poké-ball lollipop, this Poké-fied version of Vanellope Von Shweetz from Wreck-It Ralph is sure to give you a sugar rush. Swirlix the cotton-candy Pokémon is a perfect fit for her team, as well as the virtual Pokémon Porygon 2 and, most importantly, the glitch Pokémon Missingno, a corrupted Pokémon that can only be obtained by glitching Pokémon Red, Blue and Yellow. Very fitting considering Vanellope is a glitch herself.

Famously portrayed by Angelina Jolie in the 2014 film of the same name, Maleficent would make a perfect member of the Elite 4 (the cream of the crop of Pokémon trainers). Her dark type team fits perfectly, as does her modern gothic outfit. Hydreigon, the brutal Pokémon, matches brilliantly with her iconic dragon form and sums up that this would be a trainer you would not want to meet in a dark alley.

7. Kida from ‘Atlantis: The Lost Empire’

One of Disney’s highly underrated movies from the early 2000s, Atlantis: The Lost Empire follows Milo Thatch as he sets off on a voyage to find the lost city of Atlantis. There, he meets Princess Kida, and as a nobility of an ancient civilisation, her ghost type and ancient fossil Pokémon couldn’t be more of a perfect fit. Notably, her Golurk, the automaton Pokémon, represents the giant metal warriors that protect the city of Atlantis.

Following in Maleficent’s footsteps, Hades from the fan favourite Hercules has a team of ghost and dark-type Pokémon which, as the god of the underworld, makes a lot of sense. This guy could very easily be the head of an evil team harassing a future Pokémon region. And, of course, he would have a shiny Sableye, a one in 8,192 chance encounter in the older Pokémon games. Dramatic or what?

5. Ariel from ‘The Little Mermaid’

Adorable is the name of the game here, with Ariel looking like May from Pokémon Ruby and Sapphire on a beach holiday, this cutesy rendition of the Little Mermaid protagonist has a party full of water type Pokémon, most importantly a Krabby, the river crab Pokémon, representing Sebastian, Ariel’s crustacean companion. A pretty snappy combination, wouldn’t you agree?

4. Anna and Elsa from ‘Frozen’

Perfect for a double-battle Gym Leader, sisters Anna and Elsa from the mega-hit film Frozen combine chilly ice type Pokémon and passionate fire types making for a deadly duo. Using both the Alolan and regular forms of Ninetails, the fox Pokémon, and two different evolutions of the series’s secondary mascot Eevee, Glaceon, the fresh snow Pokémon and Flareon, the flame Pokémon, the creatures this pair wield really play into the sisterly bond they share.

Wielding her trusty frying pan, Tangled’s Rapunzel is ready to take on any challenge in her new role as a Pokémon trainer. Accompanied by a Kecleon, the colour swap Pokémon, who represents fan favourite sidekick Pascal the chameleon, as well as a Smeargle, the painter Pokémon, referencing her love of art, Rapunzel has all the friends she needs to make a mark in the Pokémon universe.

2. Belle from ‘Beauty and the Beast’

Sporting a team of spooky ghost-type Pokémon, Belle will have no trouble bewitching the Beast with this team. Litwick, the candle Pokémon and Klefki, the keyring Pokémon both represent the inanimate objects that come to life during Beauty and the Beast to aid Belle while she is captive in the Beast’s castle. With these ghostly allies, Belle is ready to uncover all the mysteries the Pokémon world has to offer.

1. Alice from ‘Alice in Wonderland’

Fancy a psychedelic trip down the rabbit hole? Alice has got you covered with her mix of psychic, dark and poison-type Pokémon. Her team represents a few characters in Lewis Carroll’s famous book Alice in Wonderland, with her Buneray, the rabbit Pokémon representing the White Rabbit and Alolan Persian, the classy cat Pokémon taking on the role of the Cheshire Cat. This innocent looking character is anything but, and will confound and impair your Pokémon before you even know what’s happening. So be warned, we’re all mad here…