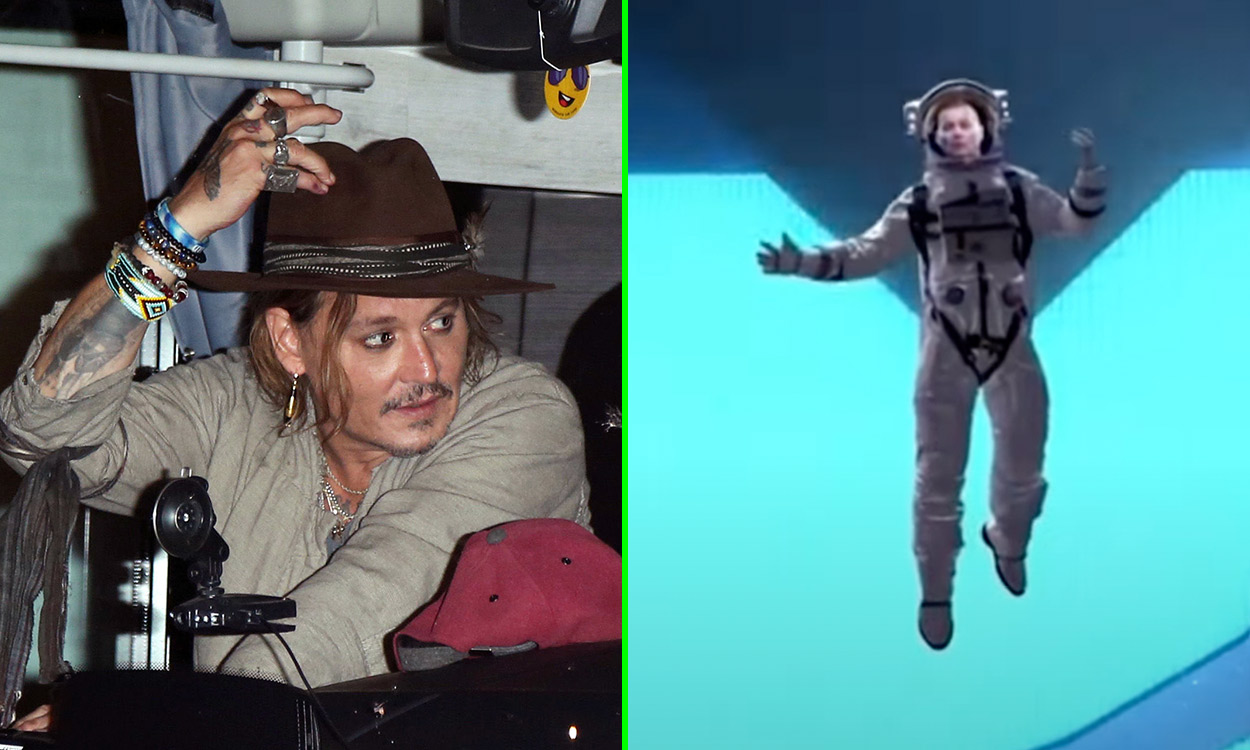 ‘Creepy and out of touch’: audience slams Johnny Depp’s cameo at 2022 MTV VMAs

It’s sometimes strange how things pan out online. When Amber Heard first accused ex-husband Johnny Depp of physically and sexually abusing her, we saw the Pirates of The Caribbean actor lose all his brand and movie deals in no time at all. Then, when the two confronted each other in one of the most covered trials in history, the tables turned and so did the media’s opinion on the veracity of Heard’s claims. Heck, even Hollywood’s biggest stars got involved to show their support for Depp.

It then should have come as a relief to all when the 59-year-old won the defamation suit, with the jury stating he should receive $10 million in compensatory damages and $5 million in punitive damages. Well, plot twist: mass opinion was about to change once again, all because of the actor’s fan base.

Long story short, Depp fans were so keen on getting their hands on thousands of pages of unsealed court documents in the case that they raised more than $7,000 to access them. Before doing so, supporters were convinced that these extra documents would be the final nail in Heard’s coffin. Bummer for the Aquaman actress’ hate club—much of the new information cast Heard in a more sympathetic light and Depp in a much less flattering one.

Following this latest turn of events, a handful of celebrities did a U-turn and went back on Depp’s victory post on Instagram and made a point of unliking it—leading many to wonder about the fairness of the trial’s verdict. Said celebrities included Bella Hadid, Game of Thrones actress Sophie Turner, Zoey Dutch and Orlando Bloom.

Regardless of his wonky reputation, Depp made a surprise appearance at the 2022 MTV Video Music Awards (VMAs) on Sunday 28 August, leaving viewers and Heard supporters alike shocked at the distasteful move. Right after Lizzo’s performance at the beginning of the star-studded ceremony, the actor made a quick cameo as the face of the Moon Person trophy.

“I just want you guys to know I’m available for birthdays, bat mitzvahs, weddings, wakes—any old thing you need,” he said in the brief clip, which saw his face imposed on top of the astronaut figure’s helmet.

While some fans were pleased to see their icon make his return official, many viewers took to Twitter to criticise the idea. “Ewww why did Johnny Depp make an appearance at the VMAs? So bloody creepy and out of touch of MTV,” one user wrote. “Johnny Depp showing up at the VMAs for funny cameos is really fucking gross,” tweeted another.

Even Heard’s sister, Whitney Henriquez—who testified that Depp struck her in the back while at the top of a staircase, grabbed her sister by the hair and hit her before trashing Heard’s closet—lashed out at MTV in her Instagram Story. “@MTV you’re disgusting and clearly desperate! I really hope that none of the people that made this call have daughters,” she wrote over an image of Heard with the strapline: “I stand with Amber Heard.”

What do you think, were you bothered by Depp’s cameo? Let us know in the comments below.

The messy details surrounding the Johnny Depp and Amber Heard lawsuit have permeated their way into the forefront of public discourse, namely social media, in what has undoubtedly become a trial on TikTok. Testimonies broadcast on the app by users along with controversial commentary, videos of ‘evidence’ found by supporters and disturbingly strange fan edits of the Pirates of the Caribbean actor is what’s being called ‘coverage’ these days.

Though Heard’s abusive behaviour has been evidenced in court, the misogynistic mocking that has arisen in response to her sexual abuse testimony is worrying to say the least. Surfacing on the platform comes an insidiously dark trend that could set survivors back decades as users sexualise the description of her alleged assault for laughs. Unravelling the progressing societal attitudes towards abuse—largely in part to the #MeToo movement—women, particularly white women, have been creating videos listening to the TikTok sound and “trying to understand where Johnny Depp went wrong.”

Failing to understand where they themselves have gone wrong, this is, unfortunately, not the first wave of the trend. The alarming signs preceded this movement and began with Rolling Stone’s reports of domestic violence, whereby a TikTok audio—which sections a portion of Heard’s court testimony against Depp of physical violence—has been used as skit material. Users are recreating Heard’s description of the incident where she stated, “I was walking out of the bedroom. He slapped me across the face, I turned to look at him. And I said ‘Johnny you hit me. You just hit me’.”

In what could be the most notable example is a video that has been viewed over 16 million times. In it, a cat is used to placate the roles of both Depp and Heard and acts out the alleged slap made by the Fantastic Beasts alum against the Aquaman actress. The worst epithet of this TikTok torrent against Heard are actual couples recreating the scene in a mocking manner—with some even dressing as the pair. And this isn’t some sordid little corner of the internet. No, even some of TikTok’s most popular creators have participated in the acting challenge. With over 18,000 clips made in response to the sound, even users like @llilmaz (who have over 4 million followers) have jumped on the supposed ‘trend’.

Let’s say for argument’s sake, Heard’s testimony is falsified, this does not suddenly make the context of the claims not about abuse—that fact is still true. And it is this fact that should embarrass those making light of the very serious issue.

Following Rolling Stone’s reporting, the public pelting Heard is receiving took an even darker and more dramatic turn. In an audio that has since been removed from the platform, users filmed themselves reacting to the actress’ sexual assault testimony, in which she described being held against her will by the neck and her underwear torn off. Their response? “Trying to understand where ‘daddy Depp’ was wrong…”

Though the sound and respective videos are inaccessible for the most part, the emergence of such a trend in the first place is a terrifying result of a prevailing patriarchal concoction that most definitely will impact future survivors coming forward with their own testimonies. In perhaps what can be seen as some bizarre crossover into the world of true crime fanaticism, the unadulterated adoration of Depp—that sets him on some innocent, godly pedestal—is reminiscent of the trials of Ted Bundy and Richard Ramirez. But this time, they’re not just sitting on the back benches of the courtroom, they’re saturating social media in droves.

Now, we’re not calling Depp a serial killer here, nor are we denying his valid victimhood to violence at the hands of Heard but—and it’s an important but—he’s not entirely innocent either. His own victimhood does not suddenly negate the crimes he may have committed too. The so-called ‘attractiveness’ of Depp, much like white women’s attitudes to Bundy or Ramirez, has fed into a burgeoning hyper-sexualisation by female fans that distracts the public from real evidence and focuses on how ‘hot’ he is. Sexualising the alleged abusive acts (whether real or not) does nothing but belittle victims of sexual violence and play into the existing vicious tropes of ‘you know you wanted it’.

The ‘uglification’ of Heard that has been happening, on the other hand—whereby people have mocked her appearance, facial expressions and clothing—reenacts classic cartoon imagery: beautiful is good and ugly is evil, in turn, celebrating the sexual abuse TikTok audio because of Depp’s looks.

Maureen Curtis, the vice-president of criminal justice programs at the victim assistance organisation Safe Horizon, told Rolling Stone that the trends were “not surprising.” “When you have a celebrity, particularly one who’s as well-liked like Johnny Depp, accused [of violence], it makes it harder for a survivor to want to come forward, and to be believed,” she said. “People don’t want to believe a well-liked man [could] do things like this.”

While Heard’s abusive actions are, of course, inexcusable, the attitudes to male abusers of the past pale in comparison to the vitriol rallied against her—that is misogyny. Never before have we seen such a public and universal attack against a male abuser. Where are all the male-written think-pieces on supporting the victim when it comes to Harvey Weinstein, Bill Cosby or Jeffrey Epstein? But when a woman is accused of violence, then the entire society (male and female) form a mob with pitchforks and wood at their disposal. Even Roman Polanski, who was convicted of a sexual crime against a child, has been continuously celebrated in cinema—but Heard, now that’s real evil.

The unbridled support of Depp is less about him being the victim of violence specifically and more so crosses over in an evident duality of his privileged maleness. One: if he indeed is also a perpetrator of abuse then he is absolved among fans and his crimes ignored (read: ‘she’s probably lying’) and two: he is also a victim of a violence that is supported, coddled and celebrated for coming forward. In either category, or most likely both, the actor ultimately receives sympathy.

The opposite exists for Heard. As both the victim and the abuser, she is loathed beyond measure. And just like the ghosts of the cases from the past, we will look back in 20 years and wonder how in the world female fanatics of Depp behaved in 2022.