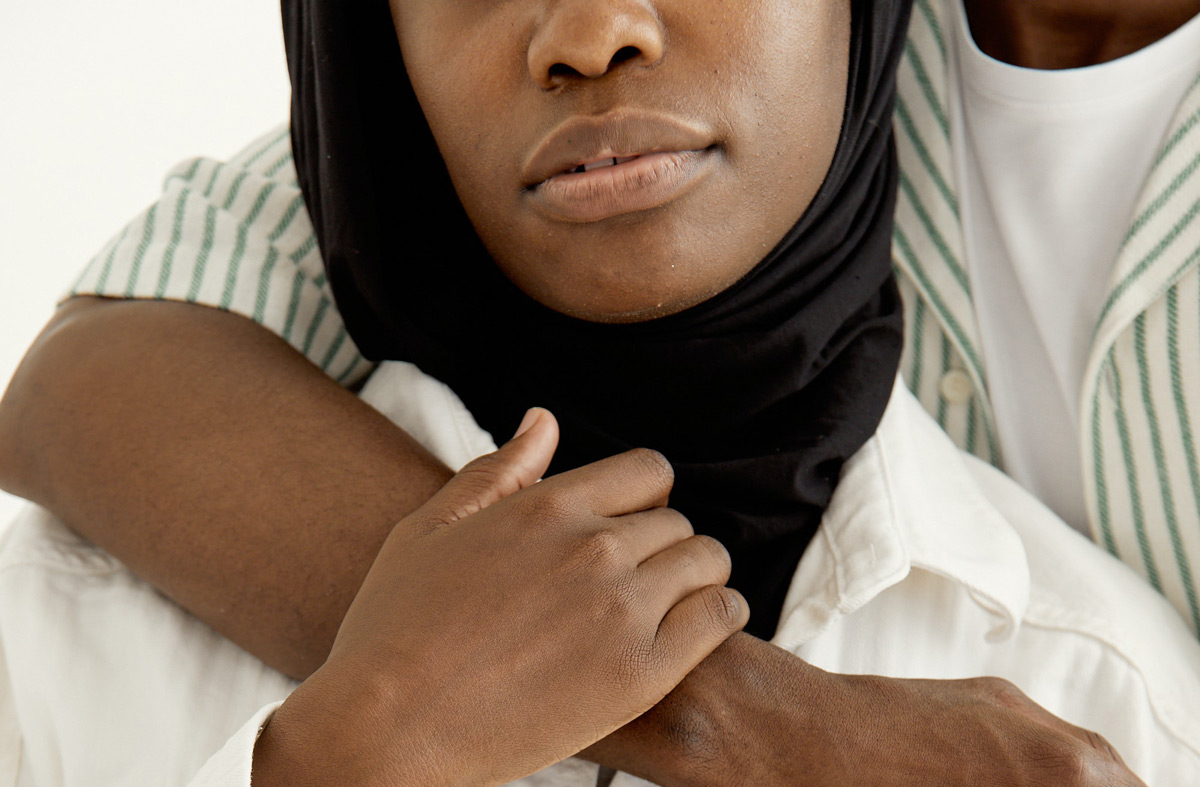 Julia Fox can wear a trendy headscarf if she wants. Why can’t the same apply to Muslim women?

A few days ago, Vogue France published a photo on its Instagram page of actress and Ye’s new girlfriend Julia Fox wearing a black headscarf and sunglasses. The original caption read, “Yes to the headscarf! Swipe left for your recap of Julia Fox and Kanye West style journey at the haute couture shows in Paris this week.”

Outraged social media users were quick to point out the double standard of praising Fox for wearing a headscarf while Muslim women in France are being punished for it. “Many hijabi women have to wear a beanie or a turban instead of their hijab when they’re in France, meanwhile celebs and models wear it and suddenly it’s ‘high fashion’?” one commenter wrote. Vogue France has since removed the sentence referring to the headscarf.

Of course, the publication itself is not responsible for government policy. Nonetheless, such an insensitive statement highlights the hypocrisy present within the country’s overall socio-political culture where conversations around the hijab are seen as oppressive when it comes to Muslim women but high fashion on non-Muslims.

Ye also found himself under the spotlight when he wore a skin-tight black balaclava in Paris. The rapper’s infamous mask was previously praised as “Paris Fashion Week’s must-see accessory” when he wore one to Balenciaga’s Paris show last summer. His look was seen as “head-turning” and “daring.” In fact so daring, it’s illegal. But the difference is that while Ye is free to walk around France’s public streets and attend a prestigious event with his face fully covered, Muslim women who wear a niqab are punished with fines of up to €150 and have to attend “citizenship education” classes.

Since 2011, France has prohibited the “concealment of the face in public space.” So why is West not fined? And why has Fox not been slapped with a ticket that reads she is not wearing “an outfit respecting good morals and secularism,” as a Muslim woman wearing a burkini at a French beach was? Modest fashion, including headscarves, are complimented and even celebrated in the fashion world. But the reality for Muslim women is much different.

For decades, France has been using secularism as a socially acceptable front to legally discriminate against Muslims and violate religious freedom. In 2004, the country passed a law outlawing headscarves in primary and secondary schools. French senators voted to ban mothers who wear a hijab from attending school trips with their own children. In January 2022, they voted to ban hijabs in sports competitions. In more recent news, Macron’s party barred a Muslim candidate from running in a local election after she was photographed in a hijab for a campaign poster. The European Court of Justice ruled that EU businesses are permitted to sack women for wearing a hijab if they say they want “neutrality” in the workplace or to avoid “social disputes.”

In a world where Kim Kardashian’s black face-covering Balenciaga Met Gala outfit is “edgy” and “mysterious,” Muslim women are physically attacked and have their hijabs or veils yanked off them. We are seen as both an oppressed victim and a terror security threat, but models or celebrities who wear what we do are seen as neither. Instead, they are hailed as fashion icons. Whether the headscarf or a face covering is worn as a fashion statement or for religious reasons, the fact that it covers the hair or face remains the same. So what changed? The garment didn’t change, but the person wearing it did. These fashion shows and trends prove that modesty or certain garments are not the prime reason for triggering “social disputes,” rather it is the visibility of Muslim women that is the trigger.

Recently, headscarves and balaclavas became seen as quirky and cool fashion statements used for the expression of the self and individuality. But when Muslim women say the headscarf is a form of self-expression or a reflection of individual conviction, they aren’t believed, and even if it was, according to French politicians, that form of self-expression is unacceptable, at least on them. Banning hijabs, niqabs and burkinis is to supposedly restore the equality and dignity of women. Yet Muslim women aren’t given the dignity to make their own choices or even have the equal freedom to decide what they choose to wear.

Whenever the hijab is portrayed as being acceptable or represented on Muslim girls or women, there is outrage. When GAP released a back to school advert featuring a girl in a hijab, it was deemed “offensive” and said to go “against equal rights and secularism.” Decathlon abandoned its plans to sell a sports hijab in France following a backlash from politicians and the public. The company said store visitors in the country became violent.

Balenciaga’s headquarters are in France—there were no protests outside of the Paris HQ over Kim and Kanye’s all-black mask outfits. French politicians, who vowed to withdraw their support of GAP and Decathlon, remained silent about Fox wearing a headscarf and Balenciaga selling balaclavas in their country. You already guessed it, selective outrage is a recurrent theme here. No one demanded Fox be saved from oppression or protested that she was “brainwashed” into thinking that she made the choice to wear a headscarf. The garment clearly holds different connotations depending on who is wearing it.

Muslim women are forced to hide markers of their identity like the headscarf to be accepted and are pushed to the margins of public life or even removed, while they watch others who wear the same garment not only be accepted but glorified. Muslim women aren’t saying people shouldn’t wear whatever they want. What they are asking is, why can’t we? 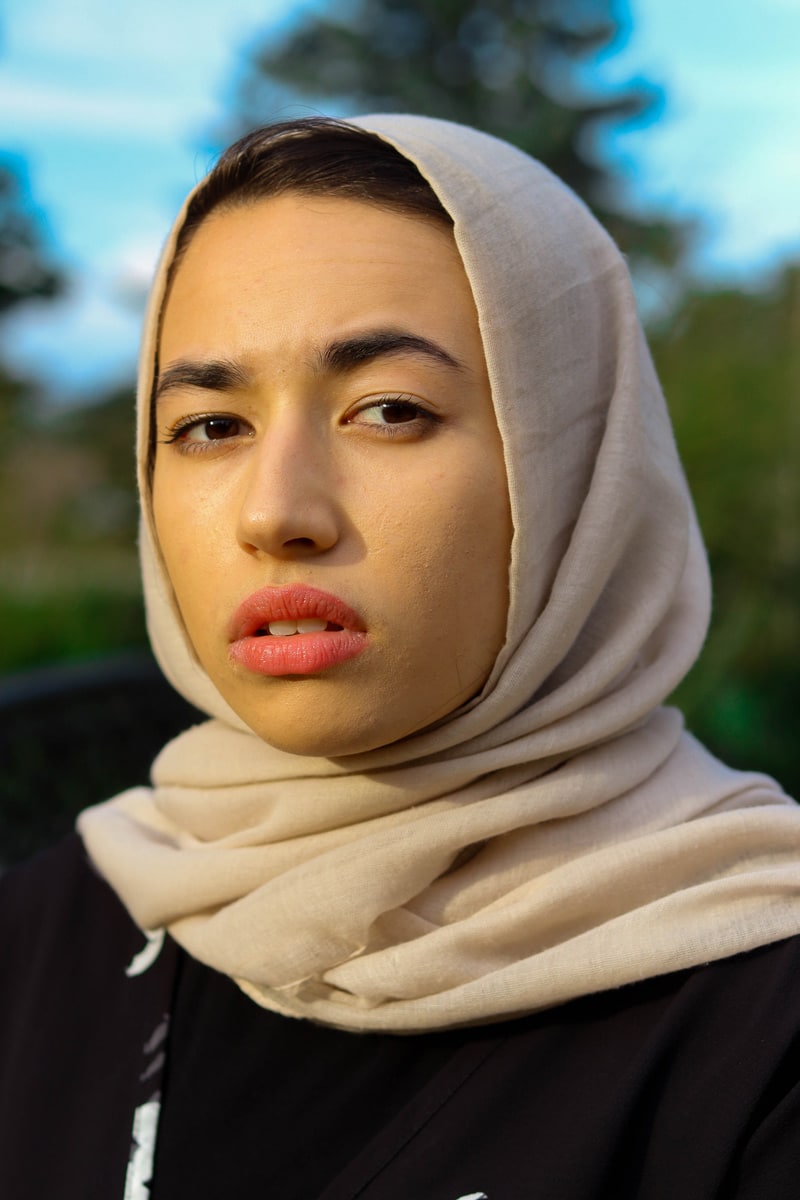 It wasn’t until I was 15 years old that I realised people held opinions over my hijab. I was on a French exchange trip and as soon as I arrived at the school, I was whisked away to an empty canteen and told that I wouldn’t be able to wear my hijab there. I felt like I was having an out of body experience, and I was soon in floods of tears. I didn’t realise that hijabs, along with other visible religious symbols such as kippahs and crucifixes, had been banned from French schools since 2004.

This was my first experience of real heartbreak. I was distraught and furious with my teachers for not warning me; with the school; even with the law. The irony is that for the whole time I was on the exchange, I wore this hideous pink bandanna that entirely covered my hair. It gave me back a sense of control and comfort, which I had come to associate with my hijab. Of course, because it was a bandana, it wasn’t a problem anymore.

I started wearing a hijab at age 13, when my mum presented me and my two younger sisters with hijabs and asked us if we wanted to wear them. My mother is a woman of few words, so there was no explanation, no bid to encourage us. It wasn’t a surprise—I’d grown up around hijab-wearing Muslim women—although my sisters both rejected it at first. I was excited by the idea of the hijab and had taken to it beyond the expectation of my mother. For me, it symbolised maturity and adulthood. I was more than willing to engage in anything that proved my ‘adult status’.

I had grown up in an environment where the hijab didn’t foster any negative connotations, and I was desensitised to its different interpretations. I was presented with a positive view of it, and was more than happy to accept this perspective, content with the idea of eventually wearing a hijab.

This isn’t the common trajectory for all Muslim women, as some decide not to wear it. Ultimately, the reason they chose to wear the hijab is an act of religious worship. Part of being religious is implementing acts of worship in your everyday life as a way to build faith.

Recently, I’ve started to feel the same way I once did, at age 15. With Boris Johnson firmly installed, I fear that I will be put in the same position in my home country as I was put in on that school trip in France. In a Sunday Telegraph column, Johnson likened Muslim women in burkas to “letterboxes.” In a 2016 YouGov poll, 57 per cent of the British public voted in favour of banning the burka.

Is the hijab different from the burka? Yes, aesthetically. I’m personally not ready for a burka, the hijab is enough to connect me to my religion. But, to debunk a big myth here, the burka and the hijab essentially represent the same thing. They’re both just the outward expression of acts of worship. The problem isn’t the act of wearing the hijab or even the hijab itself, because it is only a piece of cloth. The problem is what it has come to be associated with it. The hijab now represents for many a form of dictatorship on how women should dress. But for a lot of Muslim women, it is, in fact, the complete opposite. Religion and the female dress code is impossibly complicated, but rarely do people consider what it means to the individual female. For me, it’s neither about obedience nor modesty, but rather engaging in worship while also expressing a part of my identity.

With Muslim women commonly portrayed as passive, oppressed and a vehicle of strict Islamic regimes, people develop their own preconceived judgements. Last summer, while I was away on holiday with my family in Lisbon, we were having dinner, and a lady approached our table and asked whether she could take a photo of us. We were completely baffled, but quickly assumed that she wanted us to take a photo of her and her partner. That was not the case; she really wanted to take a photo of us. Why? She told us she had never come across happy and smiling Muslim women. Was it truly a rare occurrence or was this the view commonly portrayed of Muslim women firmly cemented all over the world?

I had never been made to feel so small and uncomfortable in my hijab. I was angry—I still get quite angry thinking about it—but also filled with an overwhelming sadness to think that when a person sees me, they see an unhappy controlled Muslim woman.

This crusade against the hijab may not only be fruitless, but actually harmful to many Muslim women who choose to wear it. Reports show that a considerably higher proportion of attacks on Muslims are launched against women who wear the hijab. I am aware that my hijab makes me a target, but it also, somehow, offers me protection. I am not afraid to wear it, because I am not afraid to be myself. But I am cradled by the fear that my expression of my beliefs could be so easily taken away from me. Poof. And then, suddenly, like millions of other women, I will be forced to do my hair nicely every morning. And that’s a mundane act that I am terrified of.