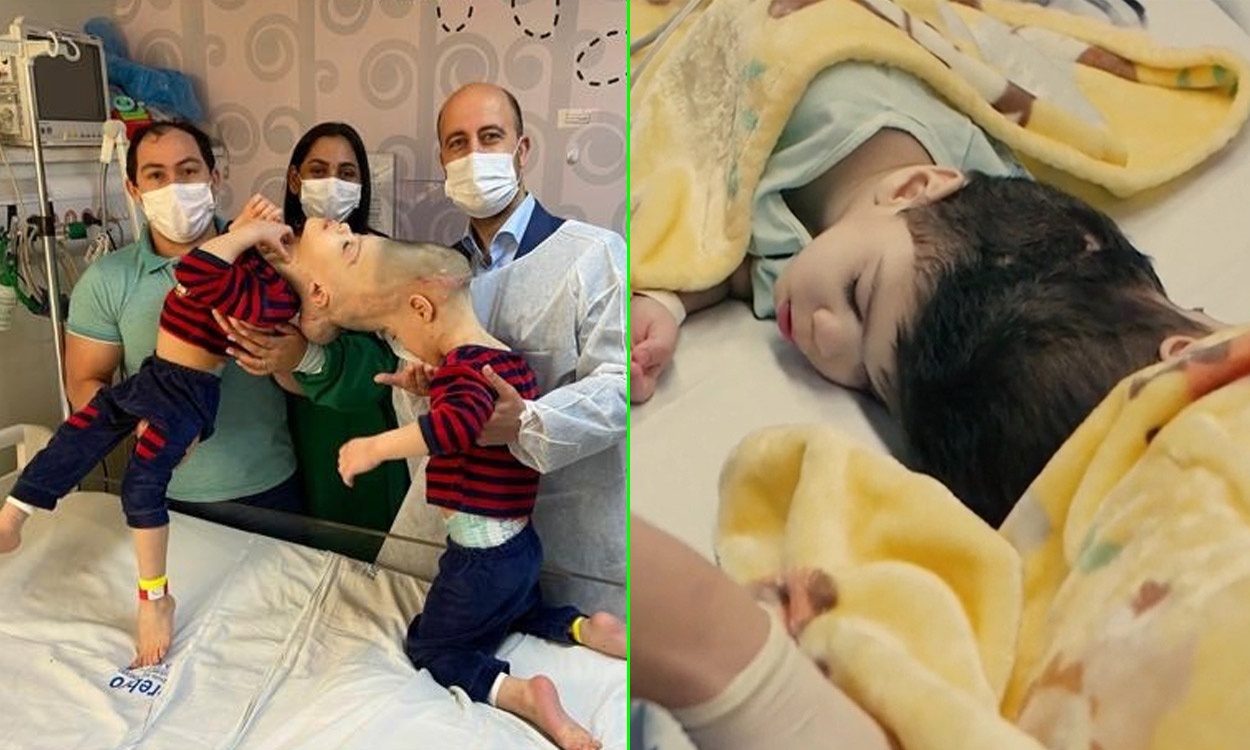 Conjoined twins from Brazil who were born with their brains fused together have been successfully separated, thanks to virtual reality (VR) and a team led by a Kashmiri-British neurosurgeon.

According to Gemini Untwined, a charity founded by Dr. Jeelani dedicated to the research and treatment of craniopagus twins around the globe, the case was one of the most complex operations of its kind ever completed to date.

Led by Dr. Jeelani alongside Dr. Gabriel Mufarrej, head of paediatric surgery at Instituto Estadual do Cerebro Paulo Niemeyer, both experts spent months trialling techniques by using VR projections of the twins based on their CT and MRI scans. The surgeons wore VR headsets and operated in the same “virtual reality room” together—despite being almost 6,000 miles apart—allowing them to overcome any apprehension about the actual procedure.

“It’s just wonderful, it’s really great to see the anatomy and do the surgery before you actually put the children at any risk,” Dr. Jeelani told The Times. “You can imagine how reassuring that is for the surgeons. In some ways, these operations are considered the hardest of our time, and to do it in virtual reality was just really man-on-Mars stuff.”

The publication went on to note how Dr. Jeelani, who performs up to 300 neurosurgical and craniofacial procedures every year, said he was “absolutely shattered” after the final operation—during which he took only four 15-minute breaks for food and water. “The team’s work was complicated by the presence of scar tissue from previous unsuccessful attempts to separate the twins,” The Times reported.

Bernardo and Arthur were said to be recovering well after their blood pressure and heart rates went “through the roof” after the procedure. The expert also mentioned that the twins’ vital signs improved when they were reunited after four days and touched hands for the first time. “There were a lot of tears and hugs,” Dr. Jeelani said, adding how the family was “over the moon” with the outcome. “It was wonderful to be able to help them on this journey.”

According to Gemini Untwined, conjoined twins are quite rare, accounting for about one in 60,000 live births, with only 5 per cent of these joined at the head. The Times also reported how it’s estimated that 50 such sets of craniopagus twins are born around the world every year. Of them, it is thought that only 15 survive beyond 30 days.

“As a parent myself, it is always such a special privilege to be able to improve the outcome for these children and their family,” Dr. Jeelani admitted. “Not only have we provided a new future for the boys and their family, we have equipped the local team with the capabilities and confidence to undertake such complex work successfully again in the future.” 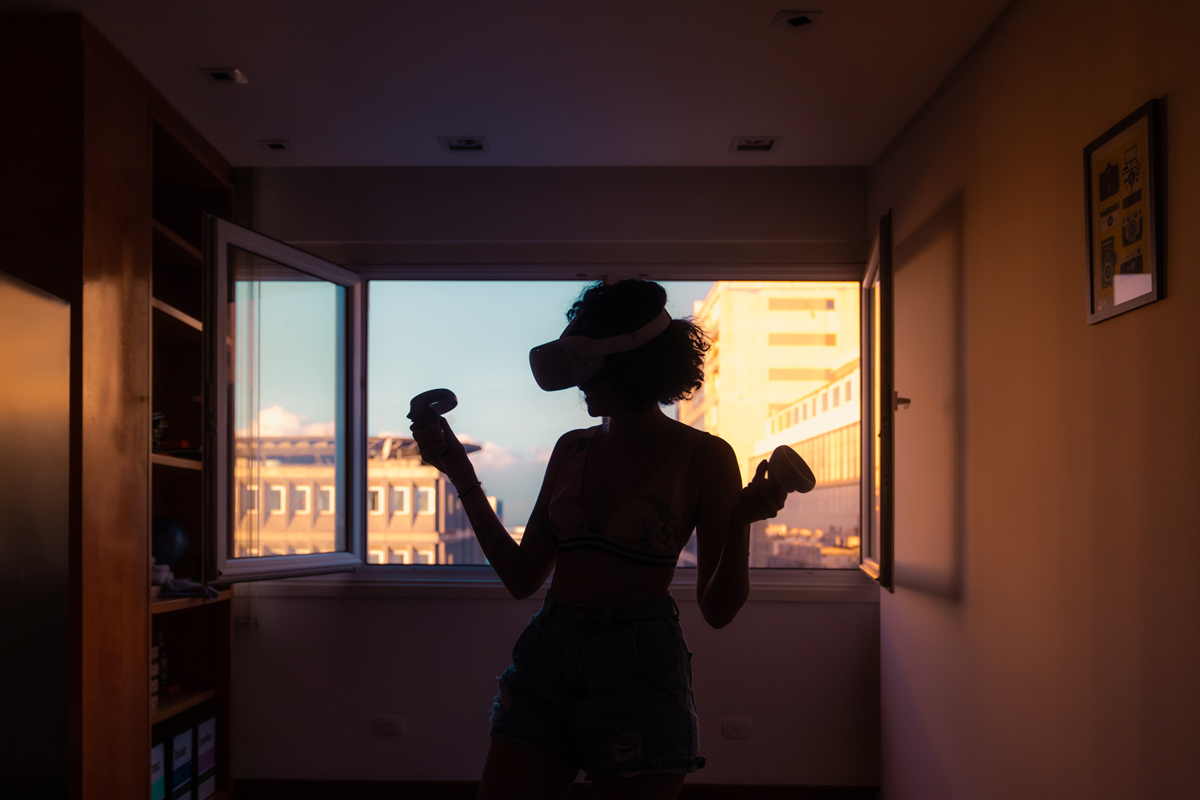 Fighting trauma with trauma: how VR exposure therapy can be used to treat PTSD

An April 2021 survey by the Centers for Disease Control and Prevention (CDC) cited significant increases in respondents showing symptoms of anxiety disorders. Healthcare workers have reported high rates of post-traumatic stress disorder (PTSD) during the pandemic—a February study of 1,000 frontline workers reported that nearly one-quarter showed likely signs of the disorder. In contrast, only 6.8 per cent of the general population ever experiences PTSD in their lifetime, according to National Institute of Mental Health estimates. Long story short, mental health conditions are on the rise due to the COVID-19 pandemic, among many other factors.

The toxic stress of lockdown and the constant uncertainty of the past year created conditions for widespread anxiety, which, for many, have just been added on top of already existing reasons. As virtual reality technology improved over the years and headsets became more affordable, academics started seeing its potential in helping to treat PTSD. Can VR exposure therapy really treat people dealing with trauma by making them relive it?

Although recreational VR headset sales to the general public have grown during the pandemic, the technology has yet to fully enter the medical mainstream. Experts who study VR therapy argue that’s about to change as clinicians look for effective and accessible ways to treat anxiety disorders.

Many VR therapies build on a somewhat divisive therapeutic technique called ‘prolonged exposure’, developed by Edna B. Foa, a professor of psychiatry at the University of Pennsylvania Perelman School of Medicine. Prolonged exposure is a cognitive intervention therapy—patients first describe a traumatic event to a therapist, in great detail and in the present tense, and then confront triggers of the traumatic event in the real world.

“While some experts have worried the practice might overwhelm or re-traumatise patients, prolonged exposure is now widely accepted as an effective tool to treat chronic PTSD,” writes The New York Times. With ‘practice’, patients become desensitised to their memories and end up proving to themselves that their thoughts can be safe. If you overcome something in VR, you basically overcome it in real life too.

For now, direct-to-consumer virtual reality therapy products remain rare, and only a few are covered by insurance in the US. Looking into whether the technology truly works and what patients who’ve tested it have to say, The New York Times spoke to US veteran Chris Merkle who, after years spent struggling with the invasive symptoms of PTSD, decided to give VR exposure therapy a try.

Understandably, building up the courage in order to agree to try a virtual reality simulation that would mimic his days in combat took Merkle some time. “I was like, you want to put me in a virtual world, reliving my worst days, my worst nightmares?” he told The New York Times. Months later, after his symptoms intensified and he felt desperate for a solution, he finally agreed.

At a Department of Veterans Affairs hospital in Long Beach, California, Merkle strapped into a headset and sank into the past. The details in the simulation were extremely precise, he said: the military-issue truck, the weight of the model gun in his hand, the dark swath of sand in the night. He narrated one particularly troubling incident out loud to a clinician, who adjusted the simulation as he spoke. “I was seeing that person shooting at me, that I hadn’t thought about in 10-plus years,” Merkle said. He was terrified. But when he took the goggles off, he said, the sense of accomplishment became its own form of comfort. Confronting the past in VR proved to him that he could survive revisiting his memories.

After about seven runs through the simulation, Merkle started uncovering fragments of memory his mind had blacked out, which is a common response to trauma. The treatment was working—he was less scared of his memories, and therefore less scared of himself. “He was getting better,” writes The New York Times.

Although VR exposure therapy should not be seen as a miracle solution, for some patients, it offers convenience and can immerse them in scenes that would be hard to replicate in real life. While a significant amount of funding on virtual reality’s therapeutic potential has focused on military veterans, researchers are ready to start treating civilian trauma.

During the pandemic, Johns Hopkins researchers have used the technology to reduce stress and burnout in medical workers. In one unpublished study, 50 nurses from a COVID-19 ward tested virtual reality mindfulness exercises (guided meditations beside animated fields and waterfalls) and all but one participant reported reduced stress levels.

In the UK, the NHS announced in March 2020 that it will offer a new virtual reality treatment for patients with social anxiety. Meanwhile, researchers are also testing whether they can alleviate childhood social anxiety with virtual reality programmes, one of which uses animated AI bullies that growl things like “give me your lunch money.” Virtual reality also looks promising for treating phobias. As more people grapple with the pandemic’s aftermath, it certainly looks like VR therapy might be needed for civilians ASAP.