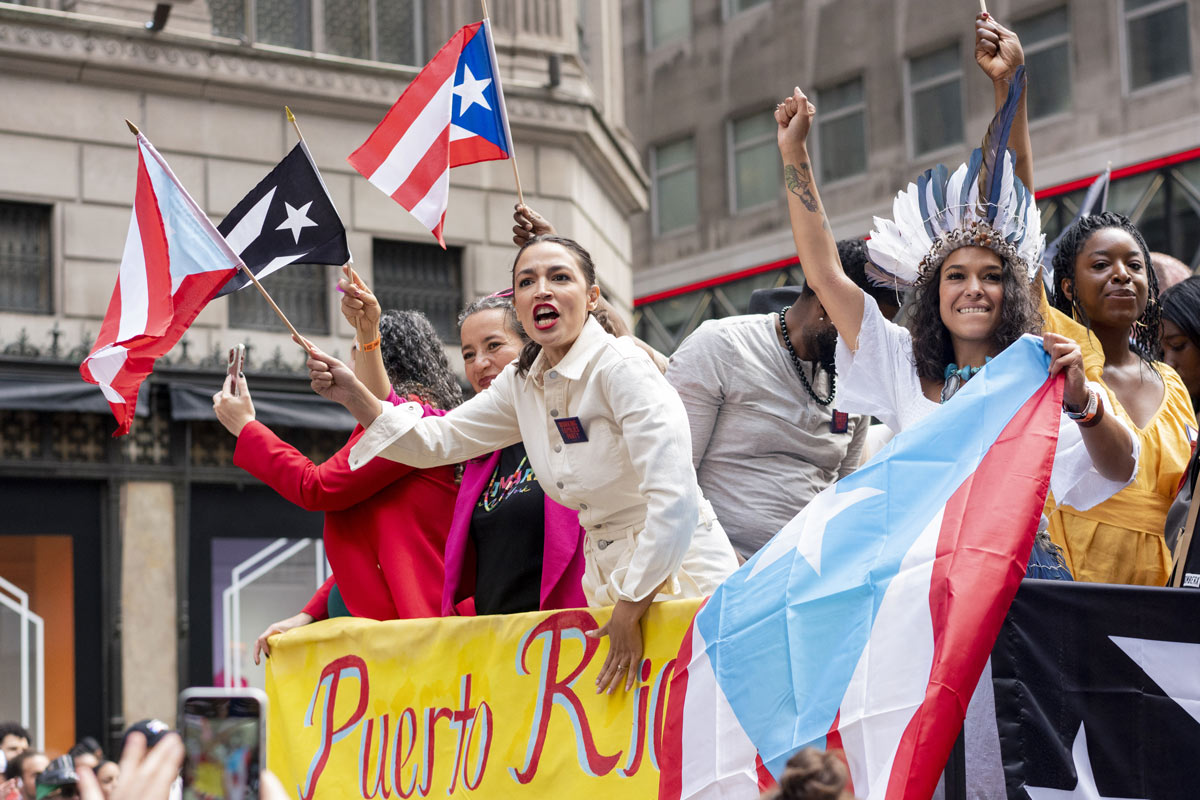 AOC case study: How to make social media work for you (politicians edition)

Ever since her appointment to the United States House of Representatives in 2019, Bronx-born and bred Alexandria Ocasio-Cortez (AOC) has re-invigorated the scope and style of social media-based political communication. As the youngest woman and indeed youngest Latina woman ever to serve in Congress, AOC immediately became a permanent fixture in American politics, both within Washington’s own sphere and the realm of social media.

AOC capitalised on the power of online media from day one. Her first campaign video ‘The Courage to Change’ received over 1.6 million views. Her grassroots campaign was ultimately built using online platforms in order to gain visibility without the backing of wealthy lobbyists or corporate donations. Her logo and branding have always been symbolic of her “insurgency, youth, diversity” and “liberalism,” as stated by The New York Times. This clever visual branding has allowed her to become stronger and bolder within the social media swarm of political propaganda.

Ever since her appointment, AOC’s online presence has only continued to grow. Her personal Instagram page has 8.6 million followers and her Twitter has over 13 million followers. So what is it exactly that has made the American politician and activist so successful on these platforms? One of the ways in which AOC has been so effective in using social media is her ability to combine politics with genuine personality. She aims to inform and educate while simultaneously creating an online space where her followers feel they understand her and can relate to her as an individual.

For example, livestreams are a common occurrence. They vary in content, from specific legislative Q&As to cooking tutorials. In one instance, AOC dived straight into a global gaming trend and broadcast a livestream of her playing the game Among Us on Twitch—alongside streamers like PewDiePie, Sykkuno and Corpse Husband—while at the same time encouraging young people to get out and vote. According to the BBC, the stream had over 400,000 watchers and lasted over three and a half hours. Utilising these different, more informal methods of communication is key in humanising such otherwise-stoic public figures.

One of her most impactful livestreams included a detailed and emotional personal account of her experience during the attack on the Capitol in January 2021. The footage, which was also uploaded to her YouTube channel, allowed AOC to recount her experience and highlighted the power of being able to speak directly to the public about these sensitive and highly emotional events.

AOC is able to express herself authentically online primarily due to her age and the fact that her upbringing has directly intertwined with the growth and development of these social media sites. The fact she had used these platforms prior to her political career allows her posts to immediately appear more organic.

SCREENSHOT spoke with Jonathan Bell, Professor of US History at University College London (UCL), who considered how AOC’s online social media success is directly linked to her “ability to use a kind of humour in taking on conservative opponents and being able to throw their critiques of her back at them through humour when they refer to her clothing or approach.” AOC has had an onslaught of online criticism since her appointment and she has always been quick to use her personal knowledge of social media to respond.

More recently, it was Elon Musk who became involved in a Twitter dispute with AOC. After stating she wanted to switch out her Telsa for an electric vehicle made by unionised workers, Musk quickly took to the internet to reply “stop hitting on me I’m really shy.”  AOC fired back with “like I said, ego problems.”

The politician has never shied away from someone’s attempt to invalidate or undermine her. On the contrary, the ease with which she manoeuvres through social media interactions is evident and almost reassuring. Her progressive activism has never wavered despite any criticism she has received. AOC has most definitely curated a formula for success within the world of social media. Whether or not that formula is reproducible however is another thing.

Back here in the UK, things work slightly differently. When we think about British politicians and social media, the words that come to mind are often along the lines of ‘cringe’, ‘forced’ and just very ‘awkward’. There seems to be a disconnect between the posts we see and the people behind them.

That being said, some younger female British politicians have been making conscious decisions to try and create a more relatable online persona. Labour MP Zara Sultana is one such example. Her Instagram currently has over 211,000 followers and she also includes more informal posts alongside political content. Her account hosts videos of her ‘outfit of the day’ (OOO), recap videos of her days in Parliament and even clips of her and her mates at Glastonbury.

Another British politician whose social media emulates that of AOC is the UK’s youngest MP Nadia Whittome. Her Instagram similarly hosts far more informal videos where she speaks from her home and in other personal settings. She also heightens that personability when speaking out about issues affecting the LGBTQIA+ community. Whittome identifies as queer herself and is consistently calling for action in regards to an inclusive and complete ban on conversion therapy throughout the UK.

Social media is undoubtedly one of the most influential tools of communication for modern-day politicians and AOC is a prime example of how to use these platforms both authentically and effectively. And from what we can see already among more and more young British MPs, this blend of personality and policy online is most definitely here for the foreseeable future.

On Monday night, US Congresswoman Alexandria Ocasio-Cortez (AOC) took to Instagram live to share her traumatic experience at the Capitol Hill riots. In the live video, which has now been captioned ‘What happened at the Capitol’ and posted on her Instagram feed, Ocasio-Cortez recalled the afternoon of 6 January 2020 in vivid detail to an audience made of more than 100 thousand followers, claiming to have received calls to “move on” and even apologise in the wake of the insurrection. It was then that she equated theses claims to the “tactics of abusers,” further admitting to being a sexual assault survivor herself.

“These folks who are just trying to tell us to move on are just like pulling the page,” the congresswoman started, referring to the Republicans who opposed President Donald Trump’s impeachment and who are now trying to sweep the insurrection under the rug. “They’re using the same tactics of every other abuser who tells you to move on. They’re trying to tell us to move on without any accountability, without any truth-telling, or without confronting the extreme damage, loss of life and trauma.” Ocasio-Cortez ruled out these Republican tactics as “not just about a difference in political opinion” but “about basic humanity.”

Overwhelmed with emotions, the congresswoman added: “I’m a survivor of sexual assault, and I haven’t told many people that in my life.” She stated that the insurrection compounded her trauma and admitted to struggling with the idea of being believed as a survivor herself, “For so many people out there—if you have experienced any sort of trauma—just the fact of recognising that and admitting it is already a huge step. Especially in a world where people are constantly trying to tell you that you didn’t experience what you experienced or that you’re lying.”

The 90-minute live broadcast has widely been shared on social media, amassing over 4 million views on Instagram and Twitter. It has also left many disheartened and opening up about their own brush with assaults and manipulative tactics following all the trauma. Some reiterate the experience of witnessing their abusers escape justice while others stress on the fact that these abusers are part of our justice system.

While the internet was busy diagnosing the Republican party with Stockholm Syndrome for the second time, following the broadcast, journalist Michael Tracey decided to call out AOC and her claims—garnering him tremendous backlash on Twitter.

Though Tracey later cleared out the ‘misunderstanding’, his tweet adds to a list of undesirable connotations subjected to the #MeToo movement, one majorly being uncertainty about the credibility of victims. False accusations, fabricated sexual assaults, ‘Not all men’ and ‘Men get raped too’ are fuel to this discussion, discouraging women from opening up for fear of not being believed.

The #MeToo movement first made global headlines in the wake of the Harvey Weinstein scandal, with AOC and Dylan Farrow’s allegations renewing the much-needed attention to the movement. And yet, years after the #MeToo movement’s first impact, women like AOC who finally take the incredibly brave decision to speak up about the sexual abuse they’ve been victims of are still second-guessed and mistrusted.

When will the world realise that the only way to uproot this massive social issue is to frame the discussion right and believe women when they talk? What will it take for us to understand that women ‘preparing’ for criticism after they’ve shared about their assault and trauma is not only inhuman but can only lead to more victimising?

In 2017, gal-dem wrote, “If we are to ever end sexual violence, it is vital that we create a climate in which victims can speak up—and be believed.” Back to 2021, and things haven’t evolved one bit…