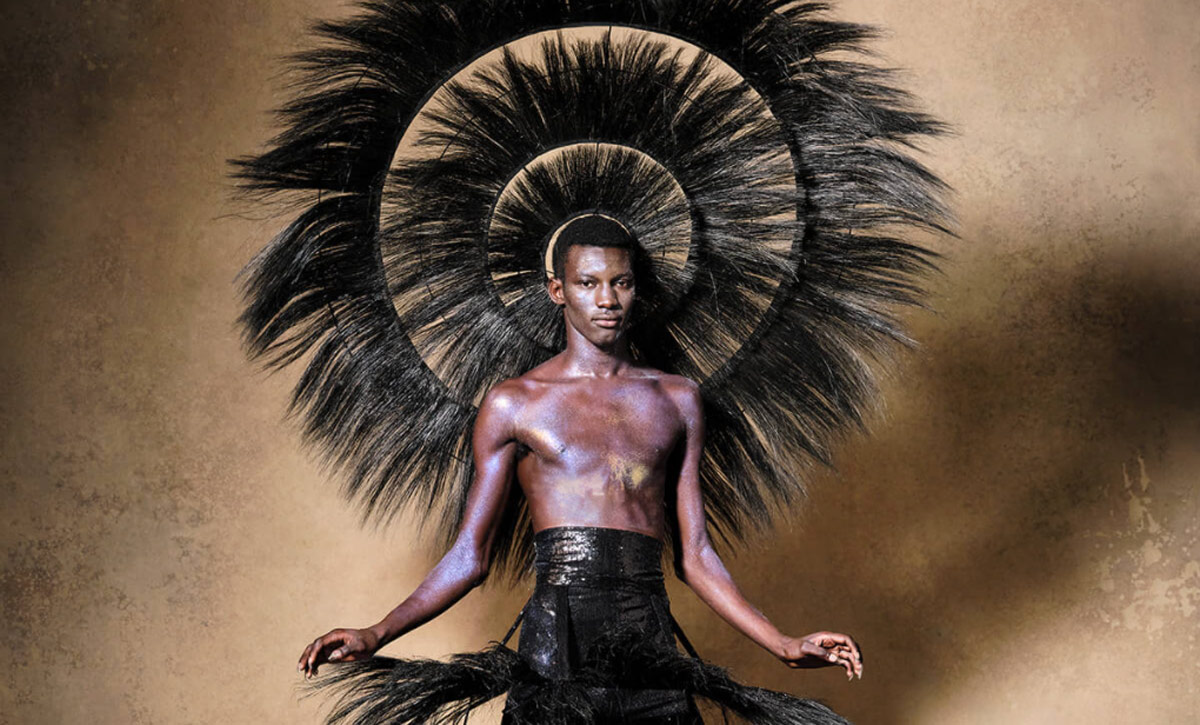 A new exhibition at London’s Victoria and Albert Museum (V&A) is assessing the role of fashion throughout history in constructing and deconstructing our attitudes towards masculinity. “At a moment of unprecedented creativity in men’s fashion and reflection on gender,” explain the curators, “this exhibition explores how designers, tailors and artists—and their clients and sitters—have constructed and performed masculinity, and unpicked it at the seams.”

Fashioning Masculinities. In just two words, the title does a lot: not just fashion but fashioning, suggesting the construction and performativity of gender. And masculinities, plural, is essential—there’s not a single masculinity on display here. A similar exhibition held at the Barbican in 2020, Masculinities: Liberation through Photography, explored masculinity via the mediums of photography and film, while the V&A show focuses on fashion.

Specifically, the show explores three different themes: ‘Undressed’ on underwear, extravagant regalia in ‘Overdressed’ and the history of suits and tailoring in ‘Redressed’. Throughout the exhibition, there’s a mix of artworks from the museum’s collection, fashion photography, and couture outfits, elegantly hung on bespoke mannequins. Artists featured include Auguste Rodin, David Hockney and Anthony Patrick Manieri, who have been celebrating representations of the male form in various media throughout the centuries.

This is the V&A’s first major show dedicated to menswear. “We’ve always had menswear on display in our galleries,” co-curator Rosalind McKever told GQ, “which is partly where the idea for the show began.” Rather than a comprehensive or linear history, the curators wanted to ask specific questions and probe certain themes. “We wanted to ask, ‘what is a suit?’ Is it a two-piece? A top and trousers? What are the elements that make a suit a suit?” McKever explained.

Musicians play a central role throughout the exhibition. Think Bowie, Prince or The Rolling Stones, who constantly challenges conventions of masculinity with their onstage personae, including fashion. Harry Styles features prominently, including his infamous November 2020 Vogue cover, lensed by Tyler Mitchell, and his starring role in Gucci’s Pre-Fall 2019 campaign—Gucci is a corporate partner for the exhibition and Alessandro Michele’s show notes from AW20 appear at the exhibition’s start. Outfits worn by Billy Porter, Marlene Dietrich and David Bowie are also featured in the fashion display.

Harris Reed, a recent Central Saint Martins (CSM) graduate and rising star on both sides of the Atlantic, is a notable voice—including a self-portrait in their Fluid Romanticism 001 collection and an outfit featured on one of the posters for the show. Reed is best known for gender-fluid romanticism, engaging with the traditions of tailoring with a decidedly queer edge. They have dressed Styles for the Vogue cover mentioned previously and Iman for the 2021 Met Gala. Reed also presented three “fashion performances” at the museum’s Raphael Court, with music from Years & Years. Frontman Olly Alexander had previously collaborated with Reed on an outfit for last year’s BRIT Awards.

“Being included in an exhibition like this is quite surreal,” Reed told CNN. “I remember going to a museum as a small kid and not seeing any representation of myself whatsoever. So it’s quite an emotional thing coming here today and really seeing everything together.”

Fashioning Masculinities: The Art of Menswear is a complex and fascinating show, which feels like just the tip of the iceberg: the objects and outfits included have been carefully selected without being overwhelming. Such eclectic survey exhibitions on fashion are rarely seen in the UK—perhaps more common at the Metropolitan Museum of Art’s Costume Institute. And while the V&A’s opening party wasn’t quite on the level of the Met Gala, a number of stars were in attendance, including train fanatic and TikTok sensation Francis Bourgeois, It’s A Sin co-stars Nathaniel Curtis and Alexander, and Bimini Bon Boulash.

Bimini’s runway look from the season two finale of RuPaul’s Drag Race UK, where they finished as runner-up, was one of the final outfits on display—a contemporary take on bridal wear, made with their regular collaborator Ella Lynch. Drag, both queens and kings alike, has seen some of the most provocative and experimental fashion designs in recent years, freed from the limitations of catwalk presentations. Bimini is a perfect example, especially within the UK scene, who, in collaboration with Lynch, has created various outfits that engage with the histories of both fashion and queer culture.

“It feels like the beginning of something rather than the end,” McKever added. “We want people to feel emboldened and for designers and other museum curators to think of menswear as a primary focus, not just a secondary category behind womenswear in both a museum show and the wider world of fashion.” 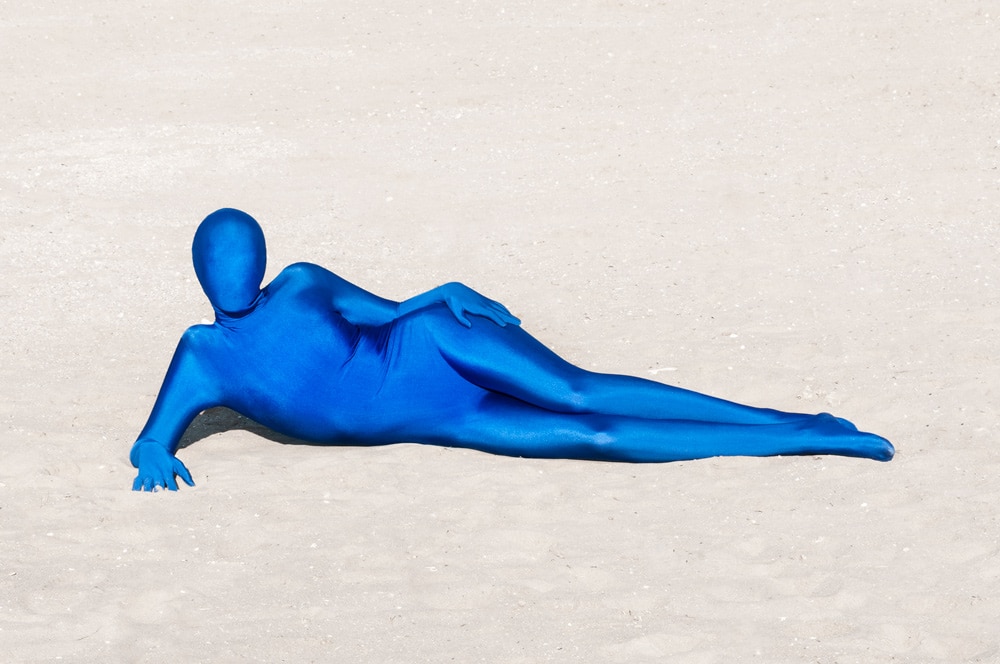 Carrie Bradshaw once described Fashion Week as the only time “the women of New York leave the past behind and look forward to the future.” As a young girl, attending fashion week had always been on my bucket list. Dialling it back to 2016, I received my first invitation but had to decline. By 2017, I found myself down at Pier 59 attending shows surrounded by celebrities I had only ever seen on TV. Enthralled with excitement, I also realised that my experience wasn’t what I imagined it to be.

By 2018, my enthusiasm for fashion weeks had almost died out. It was no longer the ‘it’ thing to do—the excitement, the passion and the purpose of it all was gone. And as I later found out, I was not the only one that felt so.  New York did too. That’s why, as hard as it is to hear, fashion truly is dead. Zero Waste Daniel said so.

The fourth instalment of Silverstein’s show consisted of a 15-room immersive experience at Arcadia Earth, a climate installation museum in downtown New York. Honouring fashion through an investigative series and a eulogy, the Fashion Institute of Technology (FIT) alumni opened the show with a speech about the fashion industry, what it represented and what it no longer stands for.

As Silverstein’s show took me through the lifespan of what once was a thriving industry, I was faced with the various culprits, each represented by models wearing signs reading who and what are guilty of this. The first one? Saying goodbye to Bryant Park. Since 1993, New York Fashion Week was famous for its Bryant Park tents where small designers used to showcase their lines to the rest of the fashion industry. In 2010, New York Fashion Week grew to nearly 300 shows a week, which meant that tents had to be removed from Bryant Park and relocated to the Lincoln Center for the Performing Arts.

What was once a highly-exclusive event, much like the overly anticipated Met Gala, became easily accessible via Youtube and Instagram live streamings. Influencers are now the new celebrities. and personal style blogging is the new reported press. “Was it polyester or was it stretch pants?” read a sign held by a model during Zero Waste Daniel’s show.

“Was it online shopping?” reads another sign, acknowledging the fact that we are in an age of fast fashion where brands like Fashion Nova and websites like Amazon can deliver an ‘inspired by’ look to your door in three days or less. Fashion today is no longer representative of how consumers shop. Fashion weeks were meant to highlight collections that were not available for at least six months. Now, this is gone, too.

Each of Silverstein’s models metaphorically plays detective in what would’ve been a police lineup aiming to identify who the guilty party is. As the show wraps, I reached the understanding that all of these things had a hand in the slow and painful death of the fashion industry; all bound by one commonality—greed.

“We mourn the death of…” Silverstein notes in his written eulogy paying respect to trends gone too quickly and the falling of fashion brands like “Fubu and Baby Phat.” Drawing from his personal experiences and knowledge of sustainability, Silverstein created Sustainable fashion is hilarious to serve as a gateway.

“We make too much, and we buy too much, but that doesn’t have to mean we waste too much,” he said during his show, an idea that relates to an interview he previously had with the New York Times where he shared why he felt compelled to take on the world of sustainable fashion: “When I think about what I want in terms of brand recognition, I would love to see [Zero Waste Daniel] as a household name. But I think that’s very different than dollars. And I don’t want to be any bigger than I can guarantee it’s a zero-waste product or that I feel happy.”

Will Zero Waste Daniel be the one to bring fashion back from the dead and offer it a new breath of life? Or will consumerism and capitalism continue to rob us of an industry that we all once knew and loved? Only time will tell, but the clock is ticking and only Silverstein and a few others seem to realise that.