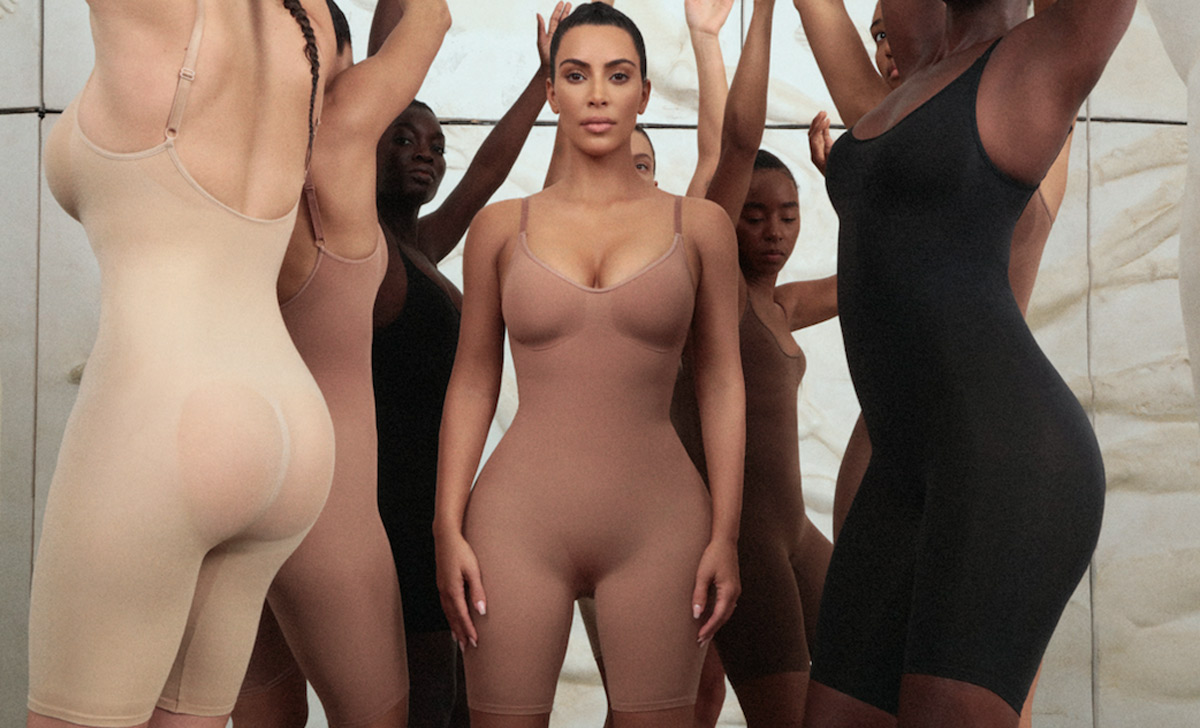 In 2022, seamless, comfortable lingerie has become the new lace push-up bra. The trend has been gaining traction in recent years, and the sleek, flexible aesthetics of workout wear have only propelled the style to other sectors of the fashion world. Structured, wired bras have since been pushed to the side, with soft bralettes coming to steal their place in our drawers. Out of all lingerie styles, shapewear is having a moment. While previously many would have considered the garments to be boring and unsexy, the category has seen a huge shift in terms of styles, diversity and consumer popularity.

Many—such as EDITED, a company focused on fashion and retail AI technology—credit the rise of seamless lingerie and shapewear with the launch of SKIMS in late 2019. Speaking to Drapers, Toby Darbyshire, co-founder and former CEO of the lingerie brand Heist, explained how he believes that Kim Kardashian’s company caused “a halo effect for the market.” He even noted that the brand continues to “grow the overall category,” thereby creating opportunities for other companies such as Heist to move into the sector.

Thanks to the increased media attention, shapewear—which was previously considered to be dull by gen Z—has gotten a much-needed update. As a result, it’s become popular to a much wider audience than before. In the same article by Drapers, CEO of BlueBella, Emily Bendell, noted that when it comes to lingerie, “comfort never goes out of style, but the modern woman does not favour comfort at the expense of a beautiful looking product. She seeks both.” SKIMS, and brands that have followed suit, have succeeded in marrying these two ideas. Seamless lingerie has become fashionable outerwear as well as alluring underwear, all the while fitting and uplifting natural curves rather than providing rigid support.

As shapewear has gained popularity, seamless lingerie has reflected a broader shift in what consumers think is sexy; rather than it meaning hot pink padded bras and panties featuring little bows, it now means sleek, pared-back styles infused with comfort. Gabriele Dirvanauskas, fashion editor at Drapers, noted that this industry shift “was cemented by the cessation of the long-running Victoria’s Secret show in November 2019.” The natural look has only skyrocketed in popularity since.

Michele Poynter, owner of lingerie and swimwear boutique Mish, similarly observed this trend in her own retail experience. She noted that “still outselling everything else are non-padded balconies, and non-wired bralettes.” Of course, the pandemic also propelled an increase in seamless fabrics, as consumers were spending more time lounging at home. EDITED even specifically pointed out that “the lounge bra has become a key lingerie trend” over the past two years. Together, these factors have led us to the wide acclaim of the seamless lingerie trend that we see still flourishing and expanding today.

What’s considered to be sexy in lingerie has come to be more multifaceted in recent years. This is largely due to increased consumer demand for products that help them embrace their natural beauty, rather than those that contort their silhouettes into something else entirely. Dirvanauskas stated that “there was a 0.3% fall in the UK underwear market in 2018/2019.” This gap in turn meant that “smaller brands [were able to carve] a niche, and larger players [had] to innovate” as a response. The best example of a niche brand able to give consumers what they wanted—more diverse, natural, and comfortable lingerie styles—is Parade.

Founded by Columbia drop-out and 24-year-old entrepreneur Cami Téllez, Parade is currently valued at $140 million and “has sold over two million pairs of underwear since its launch” in 2018. The company’s success comes in part from its direct-to-consumer business model, but largely from the inspiration underpinning it. Téllez told CNBC that she was moved to create her own underwear brand after trips to the mall as a teenager where “hot pink thongs and nude briefs” seemed to be the only available options. The Latinx entrepreneur noted that she “felt very out of touch with the vision Victoria’s Secret and other stores had of femininity […] I always thought women deserved brands that were just as bold and expressive as they were.”

Téllez’s vision has rung true with gen Z consumers, as reflected in Parade’s 270,000 Instagram followers. Speaking to Drapers, Nina Marston, beauty and fashion analyst at Euromonitor International, observed that in previous years there had been a “lack of innovation and slow digital development from the larger lingerie players” in the womenswear underwear market. Parade’s success has come from its ability to listen and respond to its consumer base. Téllez considers her largest strength to be her place as the customer, which she says “allows [her] to predict what the future of the category looks like.” As of now, the brand includes a nude range of seven colours and has expanded to include cosy loungewear and comfy bralettes, continuing to anticipate the trends of its growing consumer base.

Diversity and inclusivity are two key factors dominating the current underwear industry. Using its colour recognition technology, EDITED compiled data showing the shades assigned to lingerie and shapewear described as “nude” and “skin tone.” As a result, data showed that larger companies tailor their nude options to lighter skin tones. EDITED concluded its research by saying that “the lack of darker shades within nude styles signifies the need for these emerging brands diversifying this category.” SKIMS, among others, addressed this gap in the market. Kardashian’s brand offers nine skin tone options to consumers, while traditional large lingerie brands mostly consider white, beige, and black to constitute a nude range. Today in 2022, many competitors have followed suit—such as & Other Stories and M&S—but just a couple of years ago, SKIMS offered what they couldn’t.

We live in a time when our whole online experience is eerily customised to our nuances, so it seems only natural that our underwear should reflect our sense of self. Self-expression and comfort have become crucial aspects to consider when designing and purchasing lingerie today. Brands like SKIMS and Parade have more than checked these boxes, and then some, bringing lingerie and shapewear out of the over-perfumed counters of PINK and into the 21st century. 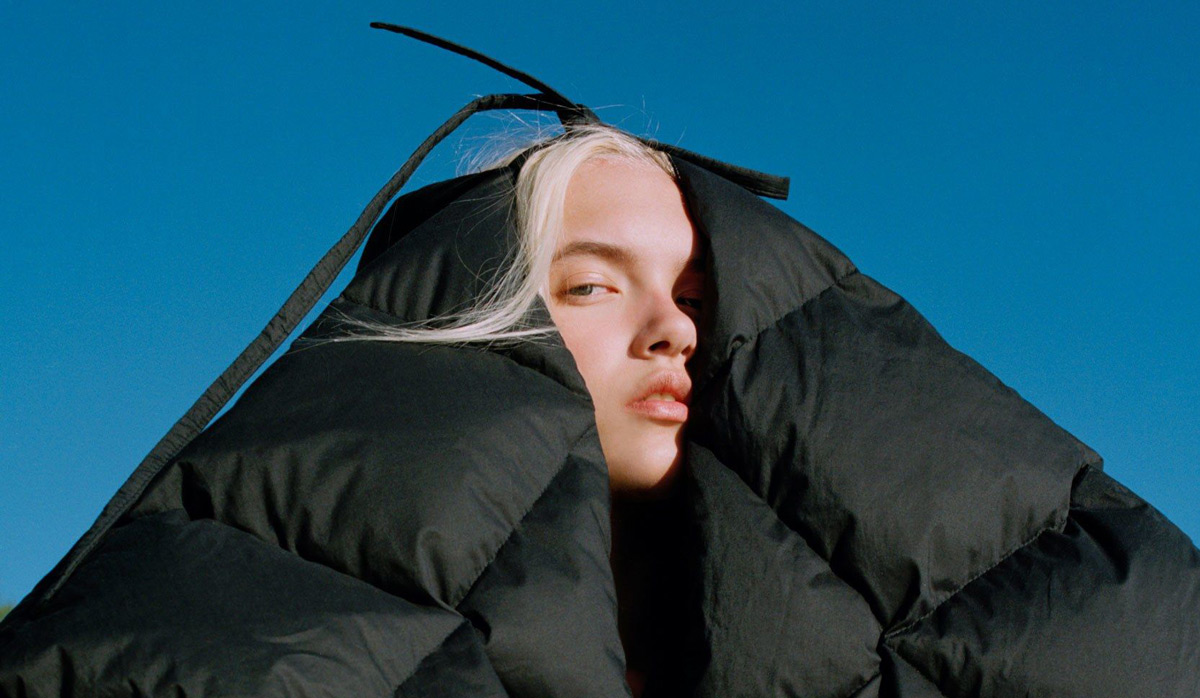 What is cloudwear, fashion’s plush and playful new trend?

Cloudwear is a trend to watch as we move out of the summer months and into chillier evenings. The plush term was coined by trend forecaster Agus Panzoni who has gained an ever-growing following of 241,000 on TikTok for her succinct and captivating analyses of what’s to come in the fashion industry. Through her honest, engaging approach to trend forecasting, Panzoni lets her followers know what to keep their eyes on while also championing small, diverse businesses. Recognising the fantastical, unfeasible nature of cloudwear’s unpredictable silhouettes, Panzoni invites her audience to engage with the trend through statement accessories. Examples range from Baggu’s cloud totes to Holzweiler’s puffy scarves.

While the trend has infiltrated Fall/Winter 2021 collections across the board—check out Eckhaus Latta’s quilted skirts and Ottolinger’s padded sandals—what exactly precipitated it?

With the rise of Lululemon and similar brands in the 2010s, athleisure has been around for a while now and it doesn’t seem like it’s going anywhere. Forbes Council Member Alison Bringé noted in May 2021 that “although the fashion industry struggled last year, it seems that activewear and athleisure brands flourished more than ever.” With more people spending time indoors and on screens watching their favourite influencers—who more often than not also double as digital personal trainers, take Grace Beverley for example—athleisure has saturated the market and our wardrobes even more so. Bringé stated that currently “more and more people not only spend their time at home exercising […] but also spending their money on clothes that are simply multi-seasonal and multifunctional.”

Cloudwear’s affinity for light, poofy layers and quilted aesthetics fits seamlessly into athleisure’s continued evolution. But as we move further into the 2020s, where is athleisure headed? CR Fashion Book’s Hannah Oh looks to utility-inspired apparel for answers. Clothing influenced by outdoor and military gear, workwear, cargo pants, and more has certainly gained popularity in recent years. While cloudwear seems frivolous compared to the clean lines, square shoulders, and multipurpose functionality of the utility trend, it does have some similarities.

The Spring/Summer 2021 and Fall/Winter 2021 seasons were marked by a “collective celebration of joyful fashion,” as stated in CR Fashion Book. Collections by luxury houses such as Valentino and Balenciaga expressed their elation through larger-than-life silhouettes, puffed sleeves, and structured ball gowns. Chitose Abe of Sacai, guest designer for Jean Paul Gautier’s couture Fall/Winter 2021 season, even took to mixing and matching draped puffer jackets with pinstripe corsets and structured undergarments. The result was a playful interpretation of the utility and athleisure trends’ love of seamless preparedness in a captivating yet largely impractical manner. Oh concludes that in 2021, “fashion seems to be flirting with utility in a way that lives somewhere between practicality and play.” Cloudwear’s fusion of fantasy and reality fits into this analysis harmoniously.

So where does cloudwear fit into our cultural moment? As we’ve collectively emerged from our quarantine cocoons over the past few months, the trend’s comfort factor makes a lot of sense. While we step back out into pre-pandemic routines, most of us aren’t ready to give up the cosiness of home fashion quite yet. As we transition into cosy autumnal apparel, puffer jackets across the nation will be taken out from the backs of closets. But why limit it to just outerwear? Cloudwear invites everyone to incorporate the comfy, padded quilting of their go-to winter coat into other elements of their wardrobe.

The trend’s down-filled apparel could also point to gen Z’s affinity for tactility in their online expression. With trends like deconstructed/reconstructed and Y2K still taking centre stage as we enter the later seasons of 2021, it’s important to recognise their emphasis on irregular closures and fuzzy materials respectively. Though gen Z trends are largely rooted in digital life, their IRL counterparts playfully interpret traditional silhouettes and textures in a way that makes them look great on screens but feel even better offline. Alternatively, Panzoni offers another perspective on why gen Z may gravitate towards tangible trends. She said that “in 2020, we were looking for comfort from an emotional and functional standpoint. In the midst of this, puffy heels and purses started trending. Mildly unpractical, this tactile trend provided emotional comfort in a time when physical connection was at an all-time low.”

As Panzoni mentioned—and her TikTok username, @thealgorythm, cleverly refers to—now, more than ever, fashion trends are influenced and dictated by algorithms and life online. The playful dimensions and inflated textures of classic quilting techniques that are showcased in cloudwear seem intrinsically connected to the internet. Not only do they look whimsical in social media grids, but their sometimes bouncy house-like shapes and iterations are reminiscent of other virtual fashion trends that exist solely online. Though the trend’s wispy name points to ephemerality, cloudwear seems to be here to stay. Panzoni even suggested that “while the FW21 runway welcomed cloudwear, the trend isn’t reserved for colder seasons: it has also appeared in some SS22 runways.” Look forward to bringing your poofy, multifunctional apparel well into the new year with you.