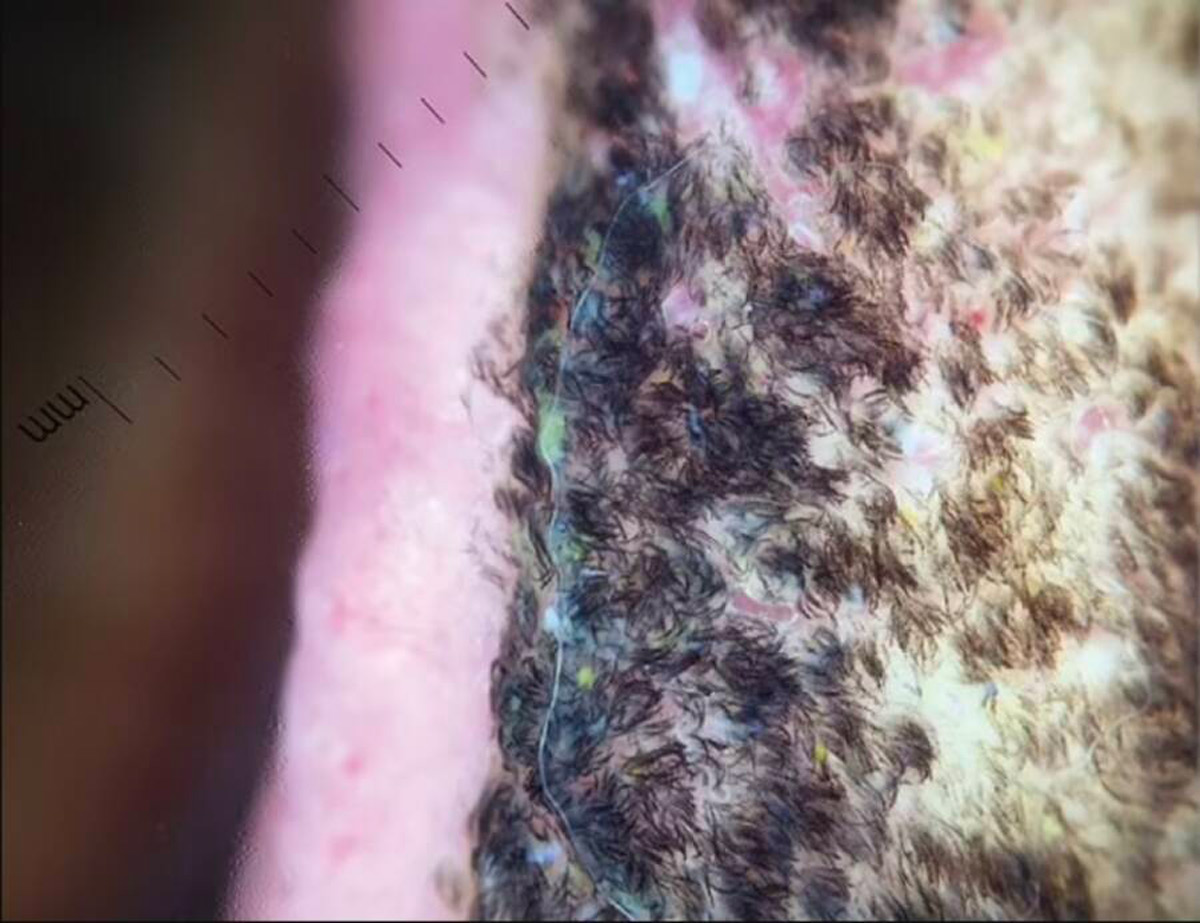 Bizarre body stories shock doctors all the time, but most recently, an Indian man presented medical professionals with a truly tongue-tying case—showing up with a black hairy tongue. The man, who is in his 50s, visited doctors in his country after suffering a stroke and was diagnosed with what is known as ‘lingua villosa nigra’. According to a case study report published by Doctor Puravoor Jayasree in JAMA Dermatology, the patient presented the dermatology department with “a painless thick black coating on his tongue.”

The stroke the man had experienced left him with weakness on his left-side which consequently led him to being put on a puréed diet, doctors detailed in the report on Wednesday 9 March. When he arrived at Medical Trust Hospital in Kochi, Kerala, the man’s tongue was covered by a black hairy coating that was also “yellowish toward the medial and proximal parts” for about two weeks. The only areas not affected were the sides and a line in the middle of his tongue.

Black hairy tongue is defined by the National Institutes of Health (NIH) as a “relatively common condition in which the central top portion of the tongue presents with an abnormal colouring and coating.”

The disease can also make tongues appear brown, yellow or green, according to the NIH. This ultimately depends on the bacteria and fungi that overgrows on the tongue, as well as other anaerobic bacteria—germs that survive and grow where there is no oxygen—which can ferment food particles. These particles get trapped in the papillae—the tiny bumps on your tongue that help to grip food while you chew—which are responsible for turning the tongue black in colour.

“Three months prior he had experienced a cerebrovascular incident with dense hemiplegia, and his caregivers first noticed the black pigmentation over the dorsum of the tongue 15 days before presentation,” the report noted. “He was being fed a diet of puréed food and liquids and was taking oral antiplatelets and antihypertensives,” it continued.

Doctors evaluated the man’s condition and concluded that the black hairy tongue was none other than lingua villosa nigra, a harmless condition, according to the American Academy of Oral Medicine (AAOM). The condition is fairly rare, with the AAOM claiming that hairy tongue occurs in about 13 per cent of the population.

Insider reported that the doctors observing the man suggested that black hairy tongue was more likely to occur in people on a puréed diet—perhaps a result of his post-stroke recovery routine. Due to the lack of abrasion or stimulation to the top of the tongue, the condition is likely to develop from ineffective shedding and a buildup of a protein called keratin. Low saliva production, trigeminal neuralgia (a sudden, severe facial pain) and cranial radiation therapy have additionally been found to increase the risk for black hairy tongue to form.

Because of this, the filiform papillae—the tapered structures on the upper surface of the tongue that give the tongue its rough texture—become long and create the hairlike appearance on the surface. There are, of course, other causes for why this occurs, which range from “bad hygiene, poor diet, oral antibiotics, excessive tea or coffee drinking, and conditions that suppress the immune system, such as HIV or cancer,” according to Insider

The NIH also added that it is more likely to occur in older people, though it can happen at any age. The condition is usually harmless and resolves itself with a regular cleaning and tongue scraping. The best course of action suggested to patients is to try to avoid the factors listed earlier. Medication is usually a last resort for this condition and reserved for acute cases. However, Insider noted that antifungals, retinoids or mouthwashes can be used.

In the most severe cases, the papillae may be snipped or removed with procedures such as carbon dioxide laser burning or electrodesiccation—where an electrical current is used to seal off the infected area.

In this particular case, however, no extreme measures needed to be taken, thankfully. After diagnosing him, doctors advised the man of “proper cleansing measures, and the discoloration resolved after 20 days,” the report stated. 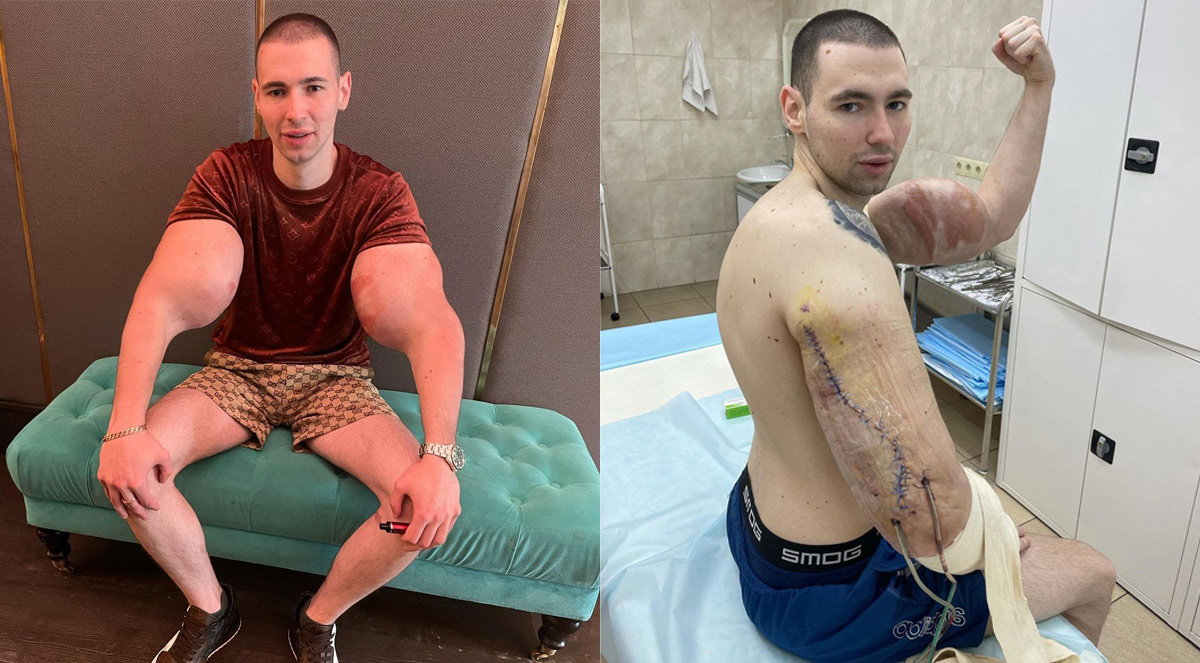 25-year-old Kirill Tereshin has been a prominent mixed martial arts (MMA) fighter in Moscow for several years now. At one point of time, however, he started suffering from bigorexia—a body image disorder where individuals, especially bodybuilders, are obsessed with getting as big as possible. In an effort to get jumbo biceps and achieve the “swole” look, Tereshin started injecting oil into his arms.

Now, using site enhancement oil (SEO) for visual appearances has been a common practice for MMA fighters. Dubbed ‘synthol’, the concoction is a petroleum jelly-like substance which is typically composed of 85 per cent oil, 7.5 per cent benzyl alcohol and 7.5 per cent lidocaine—which makes up 100 per cent of the reason why one should never administer this into their body.

What’s even worse, Tereshin took things one step further by brewing the jelly at home and injecting 10 syringes-worth of synthol everyday for an entire month into his arms. Tereshin’s ultimate goal? To make his biceps exactly 27 inches huge.

Garnering the nickname “Russian Popeye,” the MMA fighter currently posts random sketches on TikTok and Instagram, where he has amassed close to 1 million and 300,000 followers respectively. The comment section of both these platforms is quite similar—with users wondering “How is this guy still alive?” and “When will his arms fall off?”

Well, it turns out that Tereshin has been paying the price for his self-administration. Soon after injecting synthol, his arms started flaring up and became oddly discoloured. The fake implants also subjected him to high fever, intense pain and frequent bouts of weakness.

At the time, several doctors warned that he might face paralysis and even have to get his arms amputated if he kept injecting more oil. Tereshin ignored all of the expert recommendations until 2019, when he was forced to undergo surgery to clear his clogged-up triceps, remove the dead muscle and drain his arms of excess fluid triggered by the substance.

In 2021, he was subjected to another operation where doctors removed masses of dead muscle that had been poisoned by his bootleg bulking method. “He will face further operations to extract the substance and the muscle that formed during his quest to achieve beach-ball-like biceps,” The Sun reported on the matter last year.

Currently awaiting his third surgery, Tereshin told the publication that he was “very lucky” to get doctors who were willing to treat him. “I’m only 24, and my immune system is so far coping with this inflammation, but I really do not know what will happen next,” he said back in 2021. “That is why I started the surgeries to get rid of this nightmare.”

Tereshin also acknowledged how he regrets his decision to get DIY implants back when he was 20-years-old. “I did not think about the consequences. I should have thought about this earlier, I know. I blame myself, I know I’m guilty,” he concluded.