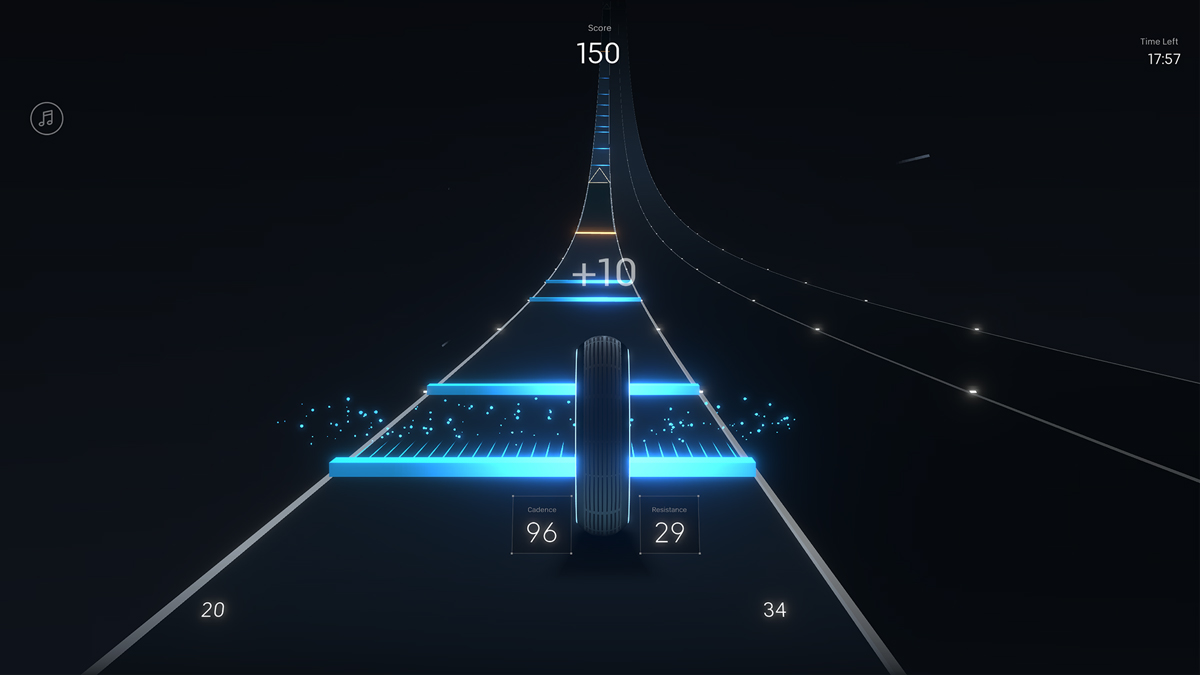 Peloton, the maker of high-end exercise equipment also known for its fitness classes live stream which many lucky ones said saved their lives and figures during the pandemic-induced lockdowns, has just revealed it is about to enter the gaming industry. On Monday 19 July, the company announced its latest idea to get people to exercise: an in-app video game called Lanebreak.

The game, which will only be available for Peloton bike owners and subscribers—no surprise there—will allow riders to change their cadence and resistance by meeting various goals and controlling an on-screen rolling wheel.

Players will be able to pick a difficulty level, the type of music they want to hear, and the duration of the track before starting. The game isn’t available just yet, but a members-only beta will open later this year. Peloton hasn’t shared details around how people will be able to sign up either.

“The game’s vibe and interface reminds me of the Rainbow Road in Mario Kart, with a track trailing off into the universe,” writes Ashley Carman for The Verge, and if you know, you know. On Lanebreak, you’re pedalling to keep your tire moving and meet specific goals. There are three types of challenges and ways to earn points: Pickups, which means that so long as you’re in the lane that the game commands, you’ll earn points; Streams, which rewards you based on your cadence; and Breakers, which rewards you based on energy output.

When reviewing Peloton’s new venture into the gaming industry, Carman admits that she didn’t find Lanebreak mind-blowing when it came to making her workout ‘more fun’. Instead, she explains that she much prefers the company’s live instructor-led classes, which have recently made it on TikTok due to a particular instructor’s gift at sharing inspirational-yet-relatable quotes. And who can blame her, Cody Rigsby is ‘a mood’ for sure.

Putting this one review aside, the idea of a game specifically made for workouts is interesting—although not that innovative, RIP Wii Fit—and suggests Peloton is open to new types of content. It’s also especially interesting considering that Netflix is also building in-app video games. Understandably, both companies have realised that they need various content offerings to keep people on their apps longer, even more so as COVID-19 restrictions are slowly but surely being lifted.

As sex ed classes become obsolete among teenagers, video games might just be the way forward

The World Health Organization declared COVID-19 a pandemic on 11 March, 2020. It was the day after Activision released its free-to-play battle royale game Call Of Duty: Warzone and a little over a week before Nintendo released Animal Crossing: New Horizons. One year later, these two games have essentially reshaped our lives over the pandemic, providing comforts of escapism and helping build socially-distanced friendships via multiplayer. But what if such gamification models could redefine today’s digital-first education system, particularly for those subjects which require ‘interactive tools’ for better understanding? What if contemporary sex education was meant to be taught through video games?

In an era where mornings have become synonymous with Zoom links and clean backgrounds for students, schools are increasingly prioritising what gets taught online. As subjects like physics and physical education go online, much of the curriculum is getting lost in translation from the real to the virtual world. And sex education is no exception.

“There’s already lots of cultural stigma around something like saying the word ‘penis’ in a room full of people who are under 18,” said Karen Rayne, the executive director of UNHUSHED, a non-profit that offers sex education for schools with the aims to remove the stigma surrounding them. In an interview with US News, she illustrated the challenges of teaching homebound teenagers and college students who are “attending classes from their childhood bedrooms” about the birds and the bees.

Not long after the pandemic hit, Rayne, who also teaches human sexuality at the University of Texas at Austin, created a manifesto outlining 10 tips for teaching online sex ed. These tips include being mindful of students’ developmental stages, expecting some awkwardness and looping in parents.

Despite her efforts, however, she admitted that some students were in fact being left behind in classes. “After so many months online, we were beginning to lose some kids in a way that I wasn’t really concerned about in March or April (2020),” she said. “It might be that for some kids, sex ed is not where they need to spend their limited online learning hours.”

A paper published by Leslie Kantor, chair of the Department of Urban-Global Public Health at the Rutgers University School of Public Health, further spelled out why teaching reproductive health during a pandemic is critical and how schools should prioritise the same. “Even when in-person schooling resumes, missed sex education is unlikely to be made up, given the modest attention it received prior to the pandemic,” the paper concluded, which has essentially hatched a sense of urgency at the educational forefront.

As teachers scramble to come up with innovative ways to “translate what we learned about effective, in-person sex education into the digital environment,” some sex education game developers think this could be their moment.

The science behind gamified sex education

Gamification can be summed up as the use of game design elements like avatars, scores, leaderboards and virtual rewards in non-game contexts such as apps for learning a skill or tracking one’s progress. With the growing use of computer-based therapy in mental health and promising results seen in the use of gamification in psychotherapy, the push to gamify sex education is part of a broader movement—deploying video games to target health issues ranging from depression to tobacco use.

So how does game design and principles help tackle a social stigma? Three major factors come into play here: interactivity, privacy and familiarity. Interactivity is a huge influence on a person’s learning capacity, especially in a digital age saturated with online lectures and note-taking. What this means in terms of sex education is that these games could essentially offer a way to interact with the subject at hand without getting ‘down and dirty’.

Freeman’s approach to game design involves role-plays and simulations which gives players a different perspective on the whole sex education front. “I think player/character embodiment is really powerful and games are uniquely better than other media at having people get into character, almost like they’re in a play,” she said. “Games are really good at that because they’re actively having the player pull information instead of pushing it on them.”

Another example of interactivity in gamified sex education is the smartphone app Tap That where players are responsible for taking care of different characters navigating their sexual relationships. If one of them has an STI, the players have to diagnose and determine how to cure or treat it. Virtual condoms are also offered in player toolkits to prevent the infections from spreading. “Sex should be a positive experience, so why shouldn’t sex ed be too?” a video explaining the game reads.

This brings us to the next two factors pushing these video games into the mainstream: privacy and familiarity. Such games have the potential to filter out all of the awkwardness surrounding the topic. It gives players the ability to learn about sex and sexuality from the privacy of their homes in a way that they’re familiar and comfortable with.

“Having students engage with the world in a way they’re more familiar with and feel more comfortable doing makes a difference when you’re trying to get them to talk about issues that are really sensitive or maybe their parents haven’t talked to them about,” Freeman mentioned. “I think giving them more of a private space to explore some of this stuff is definitely helpful.” The added privacy also fosters a safe space for players. One where they can reflect on their own sexuality and explore their feelings without being judged.

In a recent report by Censuswide, the agency surveyed 500 teachers who used video games in their classrooms over the pandemic. 89 per cent of them highlighted the fact that the tool has proved beneficial for engaging students with their subjects. 69 per cent stated that their students are more likely to do their homework when gaming is involved. And 68 per cent swore that gaming would become an important resource in education moving forward.

As comprehensive sex education becomes essential for today’s ‘digital native’ youth—with means of sexting, online dating and VR sex literally available at their fingertips—video games along with the transferrable skills they offer might just help safeguard education in the COVID-19 generation and beyond.