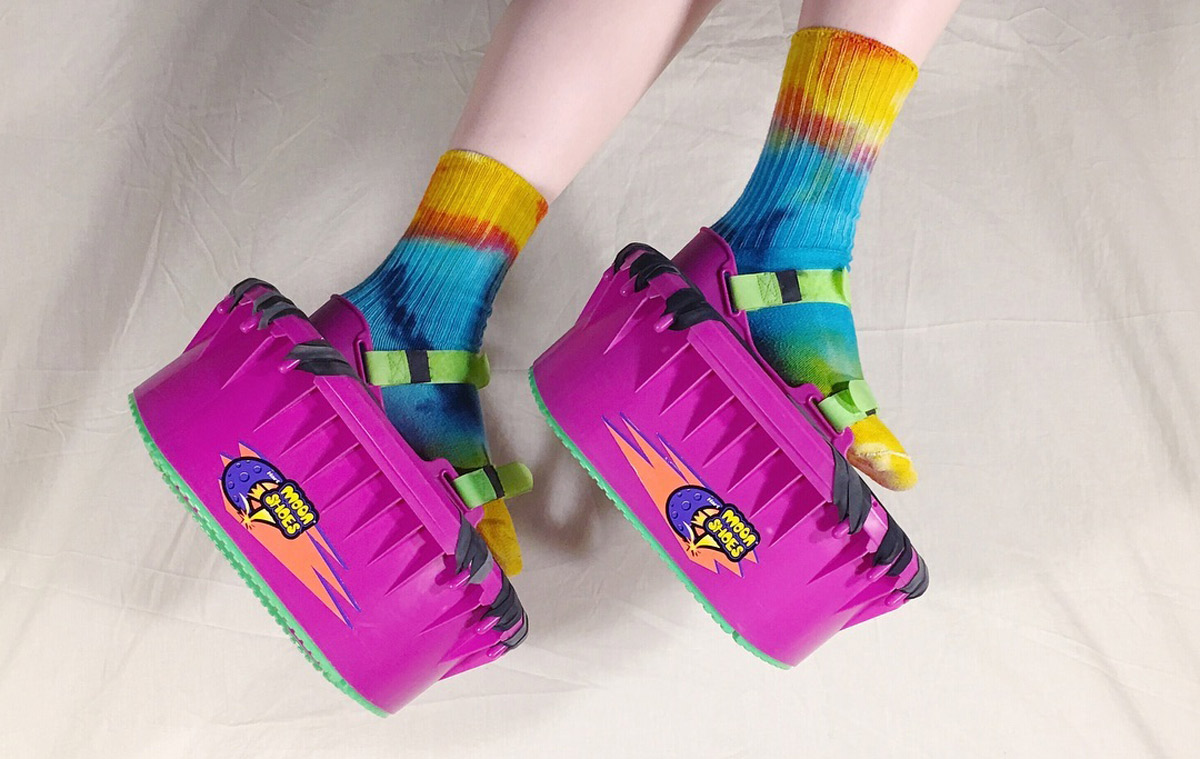 The deadly truth behind moon shoes, aka mini trampolines for your feet

The year is 1992 and all the kids in your neighbourhood are having a garden party. But there’s a catch: you’re supposed to Bring Your Own Trampoline (BYOT). Enter moon shoes in all its gravity-defying glory, here to bounce you to the Moon—if it was an inch off the ground—and back.

What are moon shoes?

Also known as pogo shoes, anti-gravity boots and ankle annihilators, moon shoes are kid-powered mini trampolines for your feet. Yes, you read that right. They simulate the experience of jumping on a regular trampoline or, with some imagination, the low-gravity environment of the Moon. Just a heads up though, the invention looks pretty questionable—among other things—but gets the job done. Well, sort of.

Dubbed ‘satellite jumping shoes’, the original moon shoes were introduced in the 1950s. At the time, the bizarre invention was made out of metal and coil springs to clamp over a person’s real shoes like roller skates. They could easily be mistaken for a torture device, if you ask me. Then came Nickelodeon in 1992. Debuting a child-friendly version of the ancient death trap in the show Double Dare, it wasn’t long before moon shoes evolved into a full-blown cultural phenomenon.

Featuring high-density plastic with adjustable velcro closures and bungee-style springs, moon shoes now come with two self-centering shoe platforms, two anti-skid soles and a pack of thick rubber bands. They require self-assembly that will take you around 30 minutes to figure out and put together. Not bad for a trip to the Moon, right? The platforms are also marketed as ‘one-size-fits-all’, even capable of incorporating adult shoe sizes while carrying a maximum weight of 130 lbs. You know what that means. Although they look like wearing buckets for shoes, these kicks are age-inclusive. You could make your inner child happy just by getting your feet into a pair of these. Plus they’re definitely cheaper (a steal costing between $25 to $50), low-maintenance and arguably safer than having a 16-feet trampoline in your backyard—all the while catering to the same purpose.

A sketchy solution to ADHD

Moon shoes were revamped in the 1990s with the aim of helping children improve balance, concentration and coordination while having fun and encouraging exercise. Proprioception—the sensory inputs we provide to our muscles and joints to tell us about our movements—aided by these shoes is an essential ingredient for children with Sensory Processing Disorder (SPD). Moon shoes can potentially give them the input they crave or be equipped by those who fear this type of movement, with a slow and gradual introduction.

The concept of bouncing around to our heart’s content also appeals to children with Attention-Deficit / Hyperactivity Disorder (ADHD) by providing them with a fun and energetic outlet at home, school or in a therapeutic setting. In short, these shoes are guaranteed to tire kids out—making them a perfect invention for parents at the same time.

However, all of these are claims proliferated by the companies behind moon shoes. “Instead of sitting in front of the TV, why not get your child jumping to the Moon?” reads a marketing effort by Fishpond, while a video advertisement by Nickelodeon makes one believe you could dunk basketballs wearing the invention. I mean look at these kids in the advertisement for the product on Amazon, they’re literally flying:

However, as we all know, what goes up eventually comes down. Does the pavement outside your apartment look tasty? Does the very thought of losing your teeth while skinning your knees and twisting your ankle sound appealing? If so, get your feet into a pair of moon shoes today! Apart from the fact that trampolines—the parent who these mini offsprings are trying to emulate—are known to cause 100,000 injuries every year, the instruction manual of the product itself issues various warnings that are subject to personal risks.

Users are cautioned against jumping indoors with the strap-on, especially on their beds to achieve a ‘double jump’ effect—and believe me, they added this instance from a real case study. They are instead advised to use these shoes outdoors and on hard, flat and non-skid surfaces like a driveway or on a carpet. Not very reassuring to be honest, given the fact that high bouncing thrills come with their own risks no matter how sure-footed you are. You can save your mattress for sleeping instead of doubling it as a make-shift trampoline, but at what cost?

According to WiseGEEK, however, moon shoes are safer than a conventional trampoline or even roller skates. “The biggest risk is probably a minor fall and a skinned knee,” the platform reassures. At the same time, lawyers over at O’Connor, Acciani & Levy noted how the original moon shoes by Nickelodeon were actually banned, but never recalled, over customer complaints of ankle fractures and other leg injuries. Yes, these death traps are still available for purchase off Amazon and eBay.

So be it for your children (hard pass recommended) or yourself, make sure to strap some knee and elbow pads on if you’re planning to give moon shoes a shot. Supervise your children during playtime and encourage them to stay on soft surfaces like grass or a carpet to avoid scrapes. After all, one small step for your kid might just result in one giant, broken ankle for months to come. 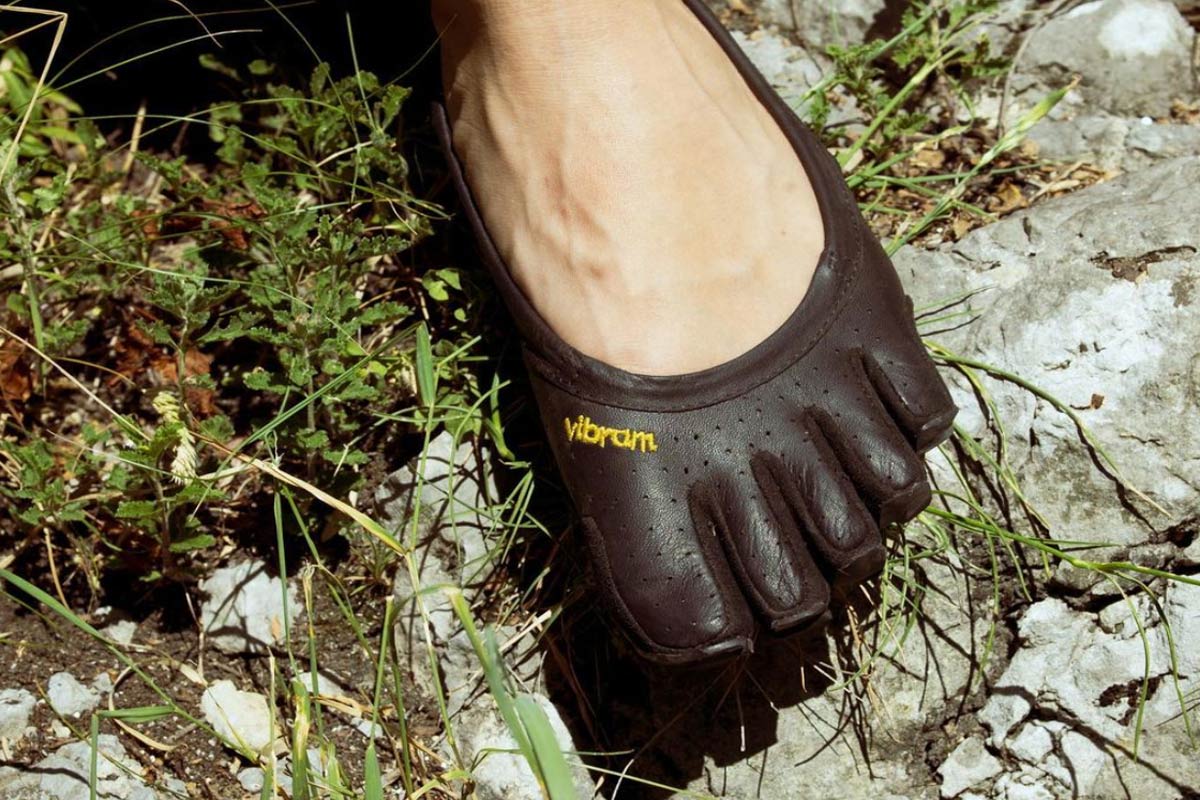 Ah, Great British summer: the sunburn, the lack of air conditioning and the infamous toe shoe. You’ve probably spotted the ghastly clogs before—on the beach, at the pool or, on the rare occasion, in the pub.

While researching for this article—trying to pin down a reason why anyone in their right mind would actually purchase one of these products—I came across a story: a tale that teaches us the importance of keeping it real and why lying can monumentally backfire. But before I go any further, let’s clarify what exactly a toe shoe is.

What is a toe shoe?

The definition of a toe shoe is almost as elusive as someone’s motivation in purchasing one. A toe shoe can take many forms, and to be honest, some of them have a legitimate place in this world—like the Pointe shoe, used by ballet dancers when dancing on the tips of toes. In this case, however, I’m referring to the Vibram FiveFingers, a type of shoe with individual toe pockets.

Vibram Fivefingers are a type of minimalist shoe, first developed in 2005, and marketed as a more natural alternative for footwear used during outdoor activities. They’re supposed to replicate being barefoot, having thin and flexible soles designed to contour the shape of the human foot. In other words, they’re a foot condom…

Why the hell would anyone wear one anyway?

With such a hideous design, you have to ask yourself, why would anyone slide themselves into one of these foot condoms in the first place? The answer is similar to why someone would choose Crocs over literally any other shoe—not for aesthetics but utility. Supposedly, the barefoot-style shoes, which fit snugly between each toe, help cut down on injury and improve running form, as their lack of heel padding promotes forefoot landing.

Back in the mid-to-late 00s, someone on the Vibram marketing team came up with an idea: what if, instead of marketing their product towards a niche group of outdoor activity enthusiasts (looking for extra grip on slippery surfaces), they instead tapped into the multi-million dollar running market? How? By claiming that the cushionless shoe with individual toe pockets is in fact better than other workout shoes for your feet when running.

And just like that, the ‘barefoot’ boom in fitness footwear was up and running, pardon the pun. Major companies such as Nike and Brooks jumped onto the toe shoe bandwagon and soon running toe shoes were dominating a sizable chunk of the market. According to The Washington Post, in 2014 toe shoes made up 10 per cent of the $588 million US running shoe market and had grown by 303 per cent between November 2010 and November 2012, compared with 19 per cent for running shoe sales overall.

But when Vibram’s claims were found to be fabricated, the bubble suddenly burst. The marketing strategy had monumentally backfired. A study published in the Journal of Applied Physiology investigated the efficiency of forefront-running, asking a group of 37 runners to alternate between forefront and heel-striking running. According to The New York Times, “In the end, this data showed that heel-striking was the more physiologically economical running form, by a considerable margin.”

In 2014, Vibram moved to settle a class-action lawsuit brought by women who claimed that the company deceived consumers when it claimed, without any scientific backup, that its shoes could decrease foot injuries and strengthen foot muscles. The mistake cost the company $3.75 million, offering a reimbursement of $94 to anyone who bought a pair of the infamous toe shoes since 2009.

But don’t worry, like most things in life, there’s a silver lining. If any good has come from this shoe’s existence, it’s the lessons it’s taught us. It’s shown us that lying about your product can bite you in the ass (and wallet). It’s revealed that as a society we are gullible, having the tendency to jump on meaningless bandwagons—without scientific backing—all because of a marketing campaign. It’s also highlighted that brands are more than willing to capitalise on these trends, without a care for the consumer, all for a quick buck. And last but not least, it’s proved your disgusting toe shoes aren’t doing anything but grossing people out.