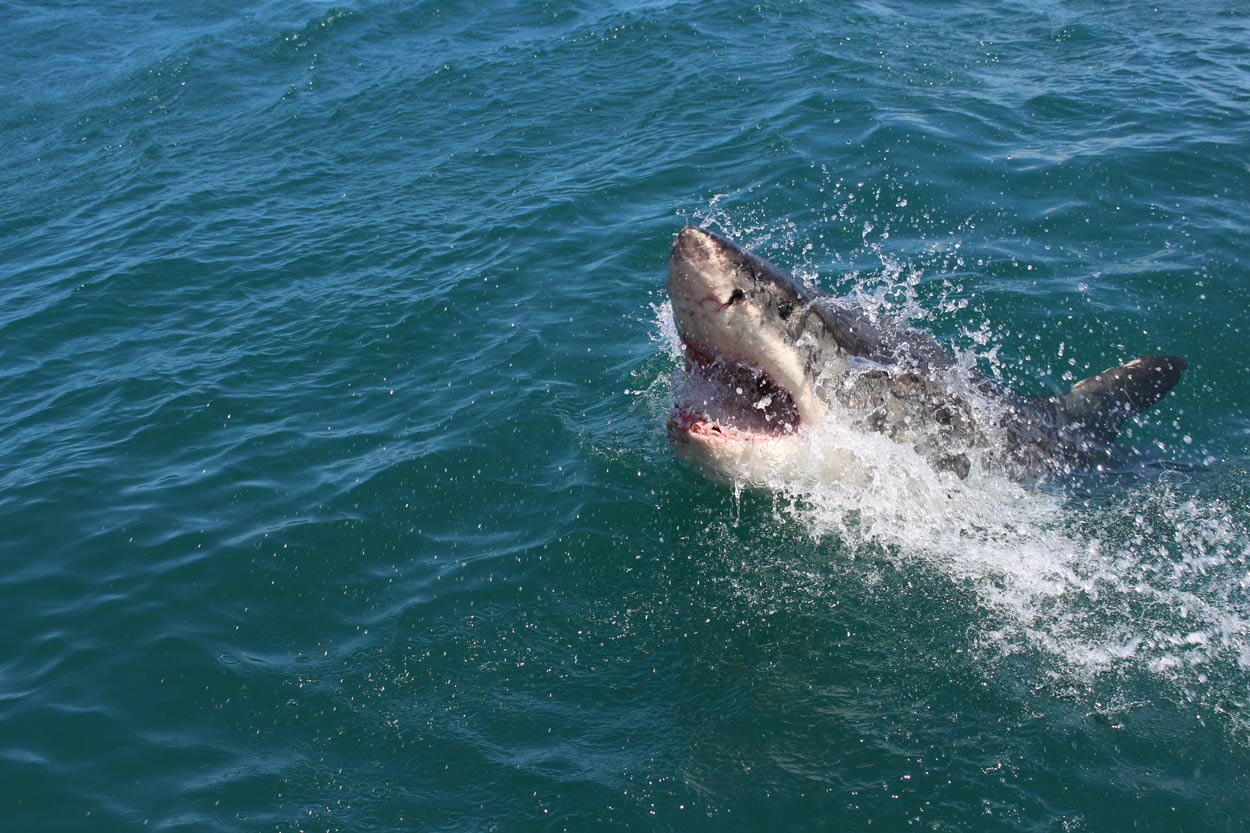 Do you ever find yourself laughing hysterically out of nervousness? What about when faced with the possibility of being eaten alive by a massive great white shark? Nope? Oh well…

In a video shared on TikTok by @xdeep_blue, an impressively-sized shark can be seen circling a boat as the group onboard are heard repeating ‘Oh my God’ probably more than Usher and will.i.am in their R&B club track ‘OMG’.

First, the beast seems to approach the boat’s engine, sending whoever’s filming into full panic mode. But as soon as the shark seems to go away, it comes back for more, this time lunging towards the left side of the boat’s rear.

While it’s hard to see everything on the clip due to the shakiness of the person filming, it doesn’t appear like the shark managed to take a real bite out of it. Nevertheless, it’s no surprise that the poor souls who just witnessed the attack are left terrified—potentially panicked that the great white may come back for seconds.

But if you felt sorry for the group like we did too, don’t. As revealed at the very end of the viral video, the shark was only attracted to the boat because the individuals on it thought it’d be great fun to dangle off a bit of meat on a rope attached to it.

It doesn’t take a genius to guess why the animal got so excited—it probably smelt the blood coming from the piece of meat from miles away. Hence why, when the group of bozos decided to pull the rope out of the water, the shark went for it one last time, making sure it got every last bite out of that bait.

No wonder it nibbled on the boat too—it was probably attempting to sniff out dinner.

How aggressive are great white sharks?

Although other shark species such as the tiger shark and the bull shark are definitely up there too, great whites are considered the most aggressive and deadliest out of around 500 different species. According to AZ Animals, great whites have been recorded in 333 attacks on humans, with 52 of them being fatal.

“The fact is, when a great white shark spots a swimmer or surfer from below, they may not be able to differentiate them from their favourite meal: seals,” the publication further explained. In other words, humans aren’t what great whites usually stalk—they simply can’t see that well.

That being said, they are excellent hunters… 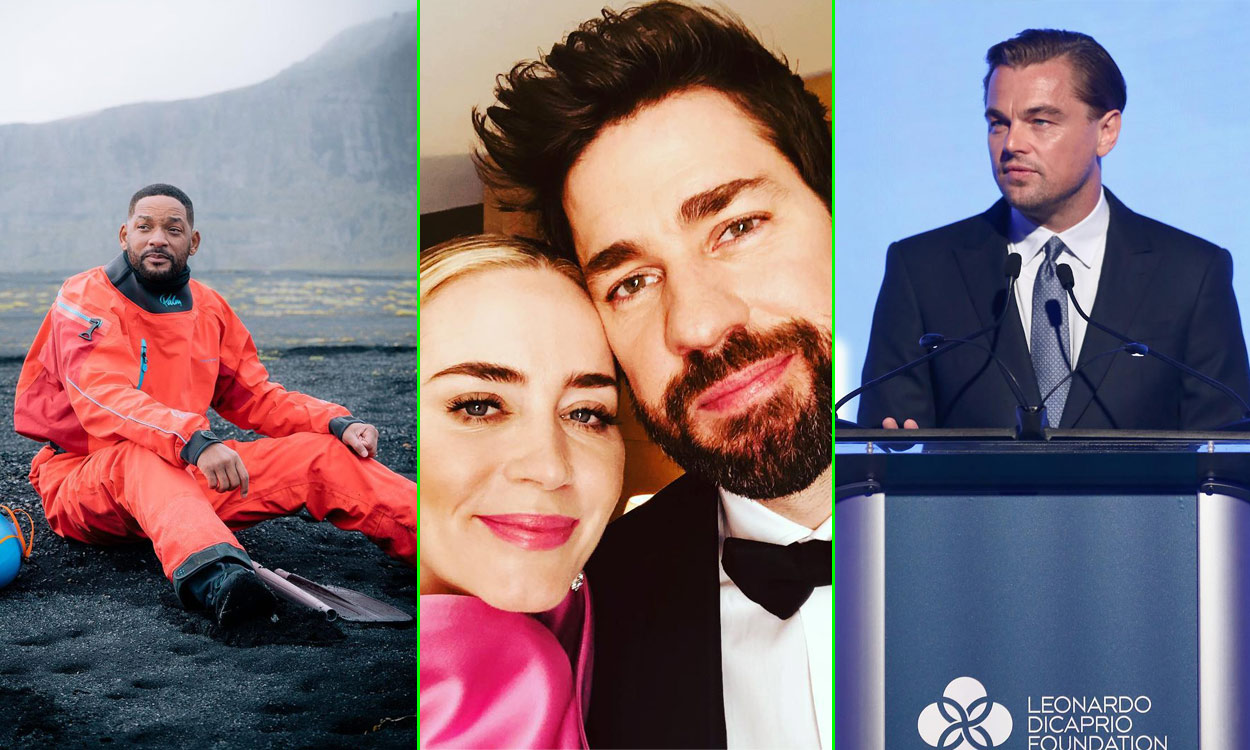 8 celebrities who have had terrifying shark encounters

With Shark Week 2022 in full swing, deep sea predators have now gripped our Instagram timelines and Facebook feeds alike. Every year, the week-long marathon of shark-related programming on Discovery Channel reminds audiences around the world of the dangers lurking in the oceans which they oh-so-adore.

While some enthusiasts binge the programme like there’s no tomorrow—complete with shark-inspired decor and even cutlery—others retreat further into the safety cities have to offer from the predators. But this is not the case for some famous celebrities. From being stuck in the same cage with a great white to falling straight into the mouth of an apex predator, more than a handful of public figures have gotten up close and personal with sharks. Let’s recount eight of them today, shall we?

In 2006, Wolf of Wall Street star Leonardo DiCaprio was taking part in an underwater expedition in Cape Town, South Africa, when his wholly-rational fear of sharks was tested to the extreme after he came face-to-face with a great white.

“I had a huge fear of sharks, and when I did Blood Diamond in 2006 I actually got stuck in a cage with a great white, which was awesome,” he said during a 2014 interview with Ellen DeGeneres. “It was a gigantic great white… They actually said in 30 years this has never happened, but the tuna kind of got stuck on the top of the cage and the great white leapt out and tried to bite it and went into the cage with me. Half of its body was in and out, and I flattened down at the bottom, and it was this far away, and it chomped a few times but I survived it.”

Former TV lifeguard David Hasselhoff had a terrifying run-in with a tiger shark, one of the most dangerous predators living in the ocean, while filming David Hasselhoff’s Sharkwatch, a series of films for The Underwater Channel. Speaking to Britain’s Hello! Magazine, the Baywatch star recalled the incident by stating: “Suddenly, a tiger shark loomed towards me—a big girl, around 10 foot long. Although I’m 6 foot and no lightweight, I felt as if I appeared nothing more than a snack to her.”

“She opened her huge mouth. All I could see were rows of white razor-sharp teeth,” he continued. “I held out the bait, hoping that would keep her happy. I admitted to Mark [the show’s expert] that I’d been more scared than I’d ever been when the shark had opened her mouth.” Luckily, Hasselhoff’s trick with the bait worked and he was able to escape the tiger shark unscathed.

3 and 4. John Krasinski and Emily Blunt

In 2016, John Krasinski opened up about a time he and his wife Emily Blunt had a close encounter with a shark while 100 feet deep in the ocean during their honeymoon. “Emily never wanted to learn scuba diving and I was like, ‘We’ll never get into trouble with sharks’,” Krasinski said on an episode of The Ellen DeGeneres Show. “All of a sudden one broke off from the circle and started swimming behind us. I saw it and Emily didn’t. He started to charge [at] Emily, so my decision was, ‘If I spook her and she moves a lot, he might bite her’.”

Krasinski then decided to roll with it and the shark eventually ended up swimming by the actress. But when the Devil Wears Prada star realised what had happened, “she kind of passed out underwater.”

“All of her air just went to the top,” Krasinski said. “It was pretty scary.”

While appearing on Jimmy Kimmel Live, American actress Hayden Panettiere called herself a shark magnet—claiming that anytime she’s in the ocean, be it paddleboarding or swimming, a shark appears out of thin air. The Scream 4 star then went on to describe a particularly scary experience while scuba diving.

“This safety diver got in to take pictures of my brother and my mom, and they had their fins on. And when the shark comes too close, you put your fins in their face, and I didn’t have my fins on. And, all of a sudden, they start going, ‘Shark, right behind you’,” Panettiere said.

“I swam for my life… They were yelling at us because the worst thing to do is to swim away from the shark and make all the splashing,” she continued. “I was like, ‘Guys, you yelled shark… How else do people react?’ I practically walked on water back to the boat.”

During Shark Week 2020, Will Smith faced one of his biggest fears by agreeing to swim with the ocean’s apex predators. The actor, 51 years old at the time, appeared on a Discovery Channel special called Will Smith: Off the Deep End and swam with a tiger shark—later revealing that he was so terrified of them that he didn’t learn to swim until he was in his 40s.

“I blame Steven Spielberg,” Smith was heard saying in the programme, referring to the director’s 1975 hit film, Jaws. “I was literally scared in the bathtub. I literally felt like a shark could come out of the spout.” But the Bad Boys star added that he’s become more determined to conquer his fears as he’s gotten older. “I am a firm believer that fear creates the greatest atrocities and evils that have ever been committed on this planet,” he said.

Smith then went on to admit how the experience changed him fundamentally. “There was Will Smith before the sharks and there is Will Smith after the sharks,” he concluded.

While on a break from filming Disney Channel’s Teen Beach Movie, Ross Lynch decided to have some fun and go snorkelling off the coast of Puerto Rico. The star had headed out into the water with his friends when a shark—that Lynch described as being “a good enough size to take a limb”—approached and gave them a real scare.

“We were snorkelling for three hours, so we were a bit far out and a shark started swimming up to us. And we all freaked out and… held on to each other real close,” Lynch explained. Luckily for the actor and his friends, the predator showed no interest in them and swam back into the deep.

Australian actor Ryan Kwanten is no stranger to blood and bites. In an episode of Esquire Network’s The Getaway, the star highlighted how he’s also a shark attack survivor. When he was just 12 years old, Kwanten had a terrifying experience with a shark off the coast of Sydney, Australia which made him give up a possible surfing career.

“I fell off the top of a wave and put my hand down, expecting to get the sandbank, and it went straight into the mouth of a shark… [but] it was a wobbegong shark; it’s got more gums than teeth… I didn’t get bitten, I got gummed [but] there are scars to prove it,” he admitted.