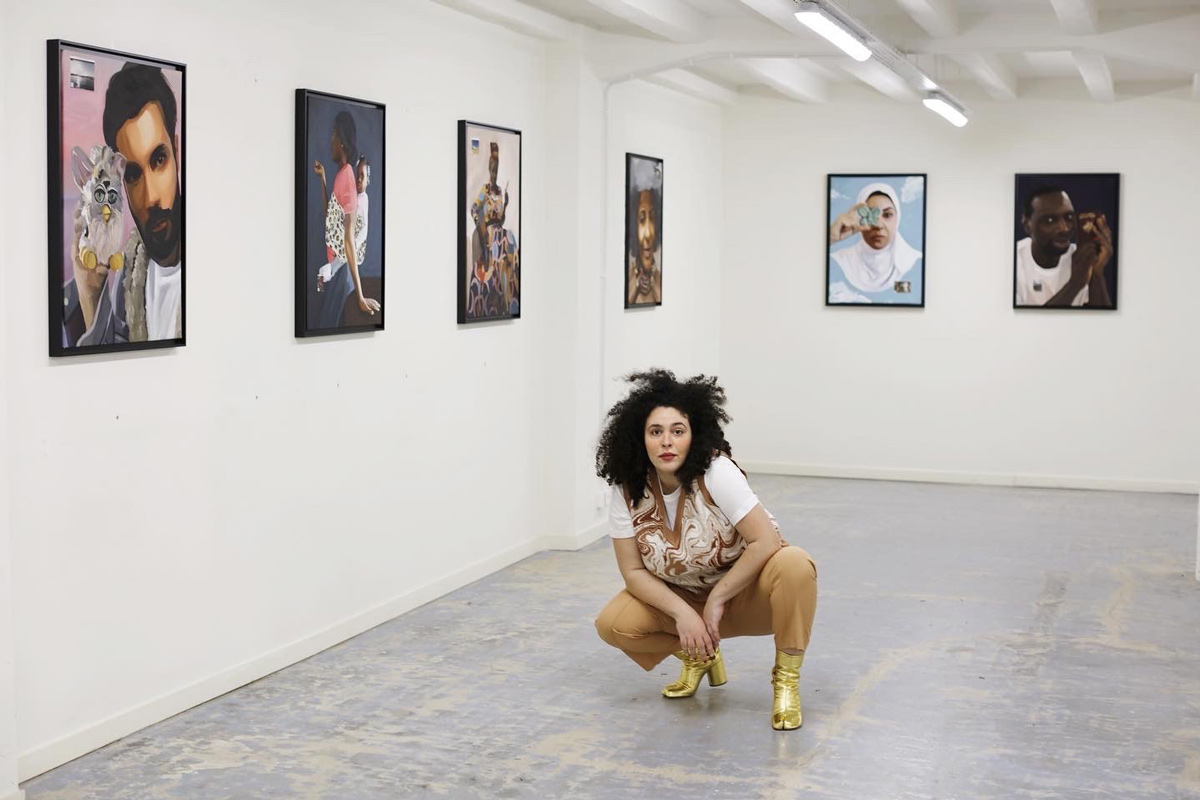 Screen Shot met up with Paris-based artist and visual storyteller Johanna Tordjman for a tour of her latest exhibition 25H01, currently available on her website along with a film of the same title. We discussed Tordjamn’s childhood and where she draws inspiration from, the impact the COVID-19 pandemic has had on her projects as well as the inherent use of technology and digitalisation in her creative process.

You grew up in the Parisian suburbs in the 1990s and early 2000s. Could you tell us about your childhood, past experiences and how they influenced the woman that you are today, professionally, personally and creatively?

I was born in Créteil, a Parisian suburb, in 1990. I grew up in a female-dominated household: my dad left us when I was 9 so my sister and I were raised by my single mother and my grandmother, two women full of self-determination and convictions. From a very young age, my mother taught us the importance of being independent women: for her, we needed to have an education, work hard and be self-sufficient.

My mother and grandmother shared tips with me on how to be resilient in order to survive in a hostile environment, in a society where women that looked like me were wrongly labelled—being a woman of colour from the projects. A concrete example was when we (my manager Samira and myself) received interview requests, the pitch was always “from Créteil to Los Angeles,” or “from Créteil to Miami,” as if Créteil was synonymous with failure when in fact, where I come from was my starting point, which contributed to my success and the woman I am today.

You initially started your career as a graphic designer and then started painting in your mid-20s. Could you tell us how this impacts your work and your creative process?

It mainly influenced me in the composition of my pieces, the colours. Another important aspect was how my previous career really taught me to be an observer. During my studies in visual communication, I had nude classes and typography classes for example. I’ve since then realised how my schooling gave me the tools I needed to create my own assets: short movies, catalogues, leaflets but also being able to do set design. It really helped me envision my project in a 360° perspective and be quite autonomous.

Even if messages and focuses can vary from one project to another, what would be the main focus in your work?

Humanity is the main focus of my work. Since day one, I’ve always focused on people, portraits and gave myself a mission of telling their stories. I’ve started painting in 2015, the same year as the terrorist attacks in Paris. I remember the solidarity, how united people felt and then after a few months, this energy faded away.

I realised that the thread of my work is unity and conveying a message of togetherness, which can be done differently depending on the project, as illustrated with my two latest shows: one that took place during lockdown, and then 25h01. 25h01 really illustrates my maturity; both as an artist and as a woman in how I’ve translated this message.

With the recurrent lockdowns across the globe, travel restrictions and sanitary measures, technology has been the only way to be in touch with our loved ones and meet ‘new faces’. How did the current climate affect your work, either creatively or in any other aspects?

All these cancellations and restrictions just gave me this need to ‘bounce’ back. I used this time to reflect and mature my projects but also adapt my work for it to resonate with the current situation. Therefore, I decided to do a ‘virtual show’ of the lockdown by depicting people’s new routines. Before painting someone, I always made sure that we met beforehand. As this was impossible due to COVID, I instead asked people via social media to send me pictures of them in lockdown so that I could paint them.

As the project was instantly relayed in the press, it rapidly blew out of proportion and crossed borders: I started receiving pictures from all around the world, from Paris to Quebec! What was interesting was the approach, as we were all living the same situation—I was painting myself through my models.

Unfortunately, this was representative of a tiny part of the population, as a lot of people don’t have access to technology. This crisis really highlighted inequalities and how people were also living lockdowns differently. Throughout this project, it was interesting to feel people’s ups and downs, happiness and melancholy. This kind of felt like an ode to Edward Hopper. He was literally our moodboard for a year! What is crazy is that if I met one of the models I worked with today, I probably wouldn’t be able to recognise them even though I’ve painted them in the intimacy of their homes!

You often say that you would describe your work as a “digital journey” or gateway. Could you explain why?

I’m inspired by Google Street View because It’s quite funny how you become a witness of ‘joyful accidents’: it accidentally captures lively instants, moments of people falling off a bike, or people sitting in a café. I would explore the world 7 hours a day and I would paint some of these moments. It’s actually quite crazy to think that you can go from one end to another of the planet in a few clicks but that in real life, it’s way trickier as your ability to travel will depend on your passport and your nationality. This is why I wanted to create this “Tordjmanistan” (with humility of course) and, from this digital journey build a world without borders.

Technology is inherent to your work, from the way you communicate with your audience to your creative process, as you use digigraphy. Is that a parallel that you’ve made purposefully, or is it a natural consequence of the era we live in?

We are the ‘digital generation’ (not to sound too cliché), so it was instinctive and natural for me to claim it and stamp it on my work, hence my use of digigraphy, which aims to illustrate how painting, an ancestral form of art, can evolve and reflect modern times, but also to add layers and depth to it, as if you enter a parallel world or reality.

Within the current context we live in, how do you see the future of the art world?

I really hope that this past year will push the art world to be more accessible and inclusive, by opening it up to wider audiences. I have this souvenir of myself, even today sometimes, of feeling uncomfortable walking in an art gallery: feeling as if I don’t belong in that space.

With digital exhibitions and fairs becoming more popular than ever (and some being free), we’re already seeing an important shift in the way the art world works. I’m also quite happy that contemporary art—actually art at large—became an Instagram trend. If one of those pictures motivates or initiates younger kids from different backgrounds to take an interest in art and to make the effort to physically go and see art, it’s also a massive step forward in my opinion. 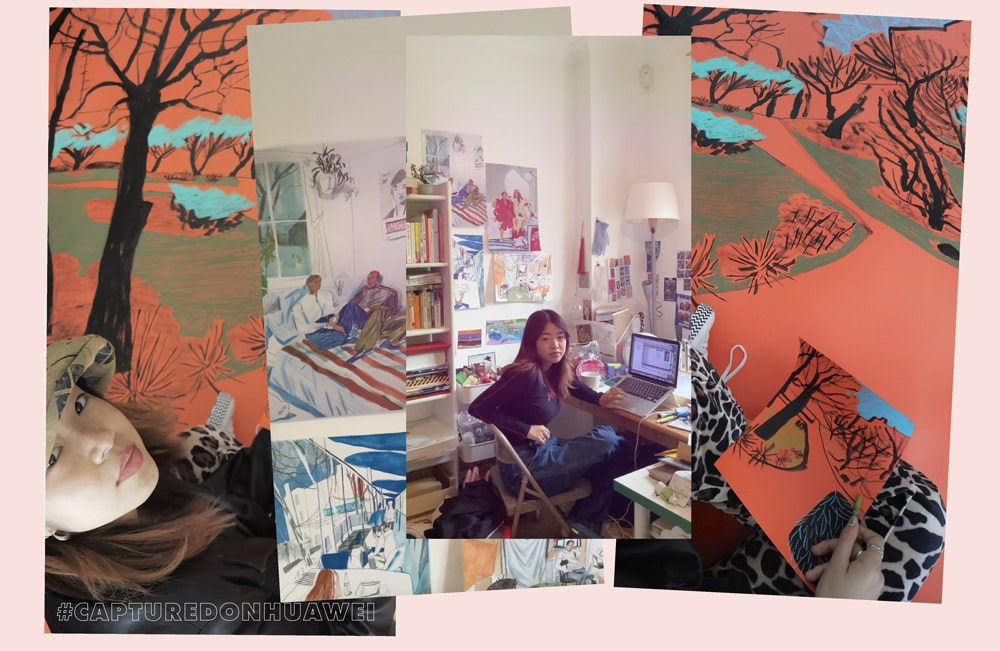 In partnership with Huawei

As part of our partnership with Huawei and its global smartphone photography competition Next-Image awards 2020, we spoke to Joey Yu about her craft of storytelling and her ability to capture the Positive Power of Creativity to depict fascinating narratives using a Huawei P40 Pro.

The London-based illustrator can turn the simple action of people-watching into a spectacular experience of vibrant colours and storytelling. For Yu, it doesn’t matter what time of year it is or where she is, there’s always a reason to create—and always a reason to inspire others, too. In order to understand the thought process behind capturing the art of storytelling through illustration, we spoke to Yu about what it takes to capture a powerful narrative into a series of images.

Are you also a storyteller? We want to see your series of photographs! Capture a story on your Huawei smartphone and submit it to the Huawei Next-Image awards 2020 for the chance to win a creation fund of up to $10,000 USD.

Storyteller: How to create a captivating narrative with Joey Yu

For her participation in the Huawei Next-Image awards 2020, Yu picked the ‘Storyteller’ category. After all, providing a narrative and expressing emotions through a series of images is what Yu does best. “For the ‘Storyteller’ category, which is all about creating narratives I thought I would make a world inside of a world—just like a paper inception. I made a really big paper landscape, put myself inside of it while making a smaller drawing inside of it.”

Creating an immersive narrative, Yu captured a story within a story by using her smartphone in a captivating way. “Obviously, there was a lot of information I wanted to capture, preferably with a wide-angle camera lens, which the Huawei P40 Pro has. It just let me fit everything into the image—the details, the colours, the sharpness, all of that information is just packed into one image.”

Taking the meaning of storytelling as a means to record a sequence of moments in time, Yu chose to put herself within her work, and quite literally step into her own narrative as it subtly develops, one pencil stroke at a time.

Immersive art is part of Yu’s main inspiration, “I love that feeling of immersive art and being able to step into a painting.” Keeping this inspiration in mind in her submission for the Huawei Next-Image awards 2020, Yu wanted to highlight how important it is as an artist to be able to narrate a story using drawings and images, “I’ve taken that quite literally in what I’ve created—hopefully, it communicates.”

Use storytelling as a tool of its own

“I think storytelling is the reason why I do what I do today. When I was little, I would read a lot and I would take those words and those images that I was looking at. Using those to just daydream was the biggest form of magic you could get—it still is today. And being able to get so many emotions from just a few bits of paper, a single image is what I decided would be my life,” Yu told us.

As an artist, being able to tell someone’s story through illustration, film, photography—you name it—does more than captivating your audience; it allows you to express and share with the world something that would otherwise stay untold. Capturing these feelings and expressing them through whichever medium you pick is what creativity truly is about.

Over time, Yu started using her daydreaming nature into her craft as a tool of its own. Illustration became the perfect way of telling stories, be that her own story or any she’s created from just looking at strangers on the street. Yu elevates these familiar, seemingly ordinary aspects of life and transforms them into magical and poetic moments.

Know which creative approach you would pick to tell your story in a series of photographs? Capture a story on your Huawei smartphone and share it with the world by submitting it to the Huawei Next-Image awards 2020 for the chance to win a creation fund of up to $10,000 USD.