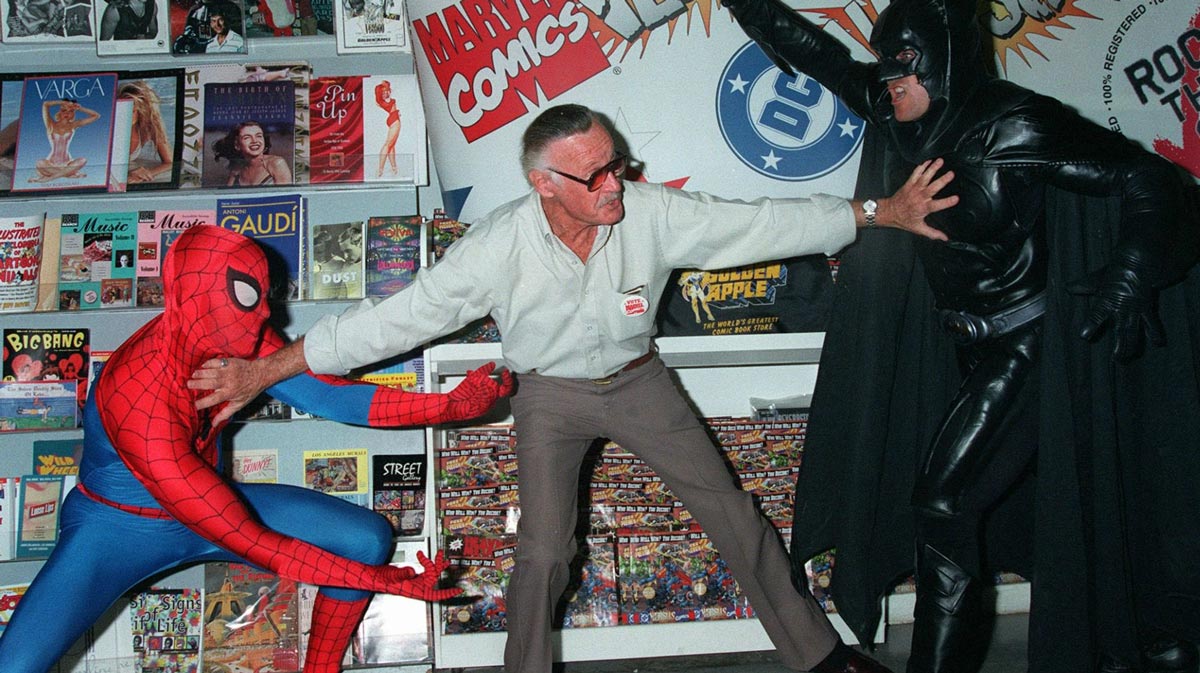 The founding father of Marvel Comics, the late Stan Lee, has made a whopping total of 60 cameos in the Marvel Cinematic Universe (MCU) to date. Though Lee passed away on 12 November 2018 at the age of 95, he had filmed a number of cameos prior to his death—thus being featured posthumously in Captain Marvel, Spider-Man: Into the Spider-Verse and Avengers: Endgame.

While the latter cast a digitally de-aged Lee, subsequent MCU films and shows have included the late legend through posters and magazines placed cleverly within the frame. But now, it turns out that Marvel Studios has a different plan for the future.

First noted by The Hollywood Reporter, Genius Brands International and POW! Entertainment have signed a 20-year deal with Marvel to licence the name and likeness of Stan Lee—seeking to bring his iconic MCU cameos back using computer-generated imagery (CGI) and old footage. According to the outlet, Lee’s image will be used for feature films, TV productions, Disney theme parks, “various experiences” and merchandising.

Andy Heyward, the CEO and Chairman of Genius Brands International, said the new deal will allow Lee’s legacy to live on. “It really ensures that Stan, through digital technology and archival footage and other forms, will live in the most important venue, the Marvel movies, and Disney theme parks,” Heyward admitted in a statement obtained by The Hollywood Reporter. “It’s a broad deal,” he added.

Though Stan the Man has always understood the assignment and electrified audiences with his scene-stealing cameos, the possibility of the late creator’s return using CGI is drawing mixed responses from fans online. “Marvel decided that Stan Lee didn’t experience enough elder abuse when he was alive,” a user wrote on Twitter, referencing the arrest warrant made against Keya Morgan—a New York memorabilia dealer who became a close companion to the comics magnate—for charges including false imprisonment, forgery and fraud.

Meanwhile, others highlighted how people in Lee’s life were once “stealing” vials of his blood to create a special ink meant to be hand stamped as autographs without his knowledge or consent. In 2019, lawyers Kirk Schenck and Jonathan Freund, who represented Lee and his daughter, told The Guardian that since the death of Lee’s wife in 2017, there had been “multiple men” who had tried to “attach themselves to Stan and his various businesses and to manage his affairs.”

Now, CGI avatars of late actors are not a new tactic in Hollywood. Disney previously revived Peter Cushing as Grand Moff Tarkin in Rogue One: A Star Wars Story, a decision that raised many questions on whether digital resurrections are an ethical way to honour the dead. The media giant drew negative backlash from both critics and fans once again when Lucasfilm decided to include unused footage of Carrie Fisher from Episode VII: The Force Awakens in Episode IX: The Rise of Skywalker after her passing. Fisher’s daughter, Billie Lourd, was additionally cast as Princess Leia’s younger version in a flashback, with her mother’s face digitally added using CGI.

Marvel’s brand new announcement, however, is even more surprising—considering the fact that the studio once stated that it will no longer use cameos of Lee in future projects “out of respect” for the legend.

While the MCU fandom is currently urging Marvel Studios to feature Benedict Wong—who is already confirmed to appear in She-Hulk: Attorney at Law—along with Deadpool in future films instead of Lee, it should be noted that sources close to the situation have also stated that neither Marvel nor Disney have begun planning Lee’s CGI cameos as of today. This means they could tune into the discourse the announcement has made online and decide on the matter accordingly.

Until then, you can certainly expect to witness Lee’s return through figurines, clothing and VR experiences at Disney theme parks in the future.

A new Marvel team has assembled around a project we’ve all been waiting for… The next Iron Man. It has been announced that a new series will air on Disney Plus featuring the latest hero in the cannon for fans to fawn over.

For those of us immune to superhero fatigue, there’s one hero that captured our attention (and our hearts) for the past decade—Iron Man, played by actor playboy Robert Downey Jr. His exit as Marvel’s figurehead left a large void for fans after Avengers: Endgame, cue your misty eyes thinking of Tom Holland’s tearful goodbye speech as Peter Parker. But now, the question of who will be the next Iron Man has been answered, and she has big shoes to fill.

The Hollywood Reporter, covering the story this week, detailed that Marvel’s newest project Ironheart has found its hit team. If Beale Street Could Talk star Dominique Thorne will officially take Tony Stark’s place as the titular protagonist Riri Williams, “a brilliant teenage inventor who builds her own version of the Iron Man suit in an MIT dorm.” A hero origin story, an exciting new suit fit and a coming-of-age angle? We honestly can’t wait.

Directors Sam Bailey and Angela Barnes have been hired for the monumental job. For me, as a black Marvel nerd, nothing is more exciting than seeing two black female directors, with a black lead-actress, spearheading a blockbuster-level series for one of the largest media properties on the planet. Bailey is known for the co-creation of the web series Brown Girls and also had a hand in directing and producing one episode of Netflix’s Dear White People. Barnes has also been at the helm of multiple hit show episodes, including FX’s Atlanta and Blindspotting.

Bailey will head episodes one through three, while Barnes will take the latter half.

If this already impressive line up isn’t enough to convince you to impatiently await the upcoming series, it’s also be revealed that Black Panther director Ryan Coogler will be involved in the project as executive producer alongside obvious big wigs Kevin Feige, Louise D’Esposito, Victoria Alonso, Brad Winderbaum and Zoie Nagelhout. Coogler’s rapidly expanding production banner Proximity Media is also joining the crew—the company works across various media genres, “from film and television to soundtracks and podcasts,” as stated by The Hollywood Reporter and has produced huge movies like Judas and the Black Messiah and Space Jam: A New Legacy.

But wait, it only gets better as Anthony Ramos and Lyric Ross will also appear in the series. Snowpiercer fans, here’s a fun fact for you, Chinaka Hodge, who served as head writer for the dystopian thriller show, will also be in the mix.

According to the publication, the female character debuted in the 2016 comic Invincible Iron Man No. 7. Created by the dream team duo writers Brian Michael Bendis and artist Mike Deodato, “she even takes over for Tony Stark as Iron Man,” the outlet continued. The announcement has been met with glee from the internet, including circles on Reddit threads such as r/marvelchampions.

We know it seems like there currently is a new line of superheroes being introduced almost every month, with loads to keep track of even outside of Marvel’s core studio. As some have probably guessed already, I’m talking about the dud that is Morbius, which has already dropped 73 per cent on its second box office weekend. We personally like to think that the movie’s flop factor is to be blamed entirely on Jared Leto’s, well, Jared Leto-ness along with his ridiculous method acting.

With the absence of Downey Jr’s Tony Stark being felt throughout the Marvel fandom, many fans have speculated who from the comics will take up the red and gold suit to head the universe’s new cast of heroes. Much like the elation Falcon and The Winter Soldier received after its release in early 2021 for featuring the Falcon (played by Anthony Mackie) donning the suit and iconic shield of our OG Captain America, another heroic symbol is about to be reborn—the iron suit.

Thorne will, however, make her debut appearance on our screens as Riri in the highly anticipated Black Panther: Wakanda Forever, slated for release on 11 November 2022.