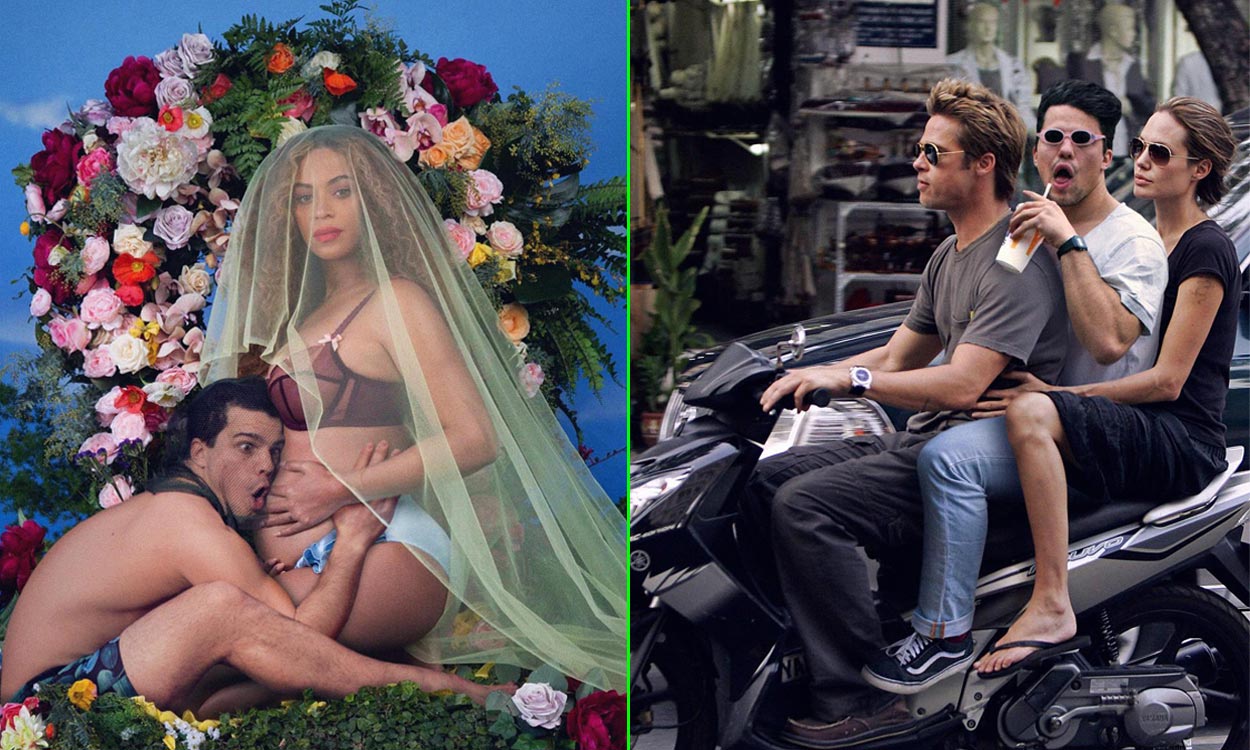 Random guy hilariously photoshops himself into the lives of famous celebrities

In 2022, the internet is obsessed with three things: capybaras, celebrity culture, and the raster graphics editing software, Photoshop. As Kim Kardashian continues to edit essential muscles out of her body, one artist has taken his Photoshopping skills to the next level by inserting himself into the daily lives of the rich and famous.

Call it virtual photo-bombing or his own take on the ‘Photoshop fails and bails’ phenomenon that has been gripping internet culture since its conception, digital artist and comedian Robert Van Impe—also known as Average Rob—is a self-proclaimed “mediocre dude from Belgium” who hilariously edits himself into celebrity photos.

Be it candid pictures or editorial photoshoots, Van Impe’s creations flawlessly blend him into the images in question, in turn giving the impression that he often hangs out with public figures in real life. From evening bike rides with Brangelina to chasing Leonardo DiCaprio—the founding father of ‘Leo Sexuals’: people who are only attracted to women aged 21 to 25—semi-naked with a water gun on a sunny morning, here are 15 mind-blowing images Van Impe has broken the internet with:

1. Behind the scenes of the iconic image

Hey Kanye, think twice before running down the halls with your soon-to-be-long-lost boo at 3 am, okay? Some of us are actually trying to catch some shut-eye here.

… And I’m pretty sure he doesn’t remember half of it.

“Had the weirdest dream last night: Ryan Reynolds was my dad and Blake Lively changed my diapers… twice,” the artist captioned this creation. “Not sure if [this is] awkward or life goals.” Oh, life goals for sure, Van Impe. Life goals for sure.

4. The secret member of the Jonas Brothers

We were really out here thinking the popular band was capped at three members.

5. Once Upon a Barf in Hollywood

Fun fact: Van Impe holds a Master’s degree in Advertising and Marketing from Coventry University and works as a journalist for Belgian comedy magazine Humo.

It’s the hole in his socks for me.

7. The legendary lengths Van Impe goes for his creations:

Here’s a tribute to all the evening bike rides Van Impe has had with the pair.

10. This one’s way too iconic to miss

12. “Throwback to when I called shotgun but Britney wasn’t having it…”

Here’s a mini throwback to the time Van Impe chose to be Miley Cyrus and Liam Hemsworth’s faithful furry friend.

15. Mooom!! Adele is taking up all the space on the couch again… 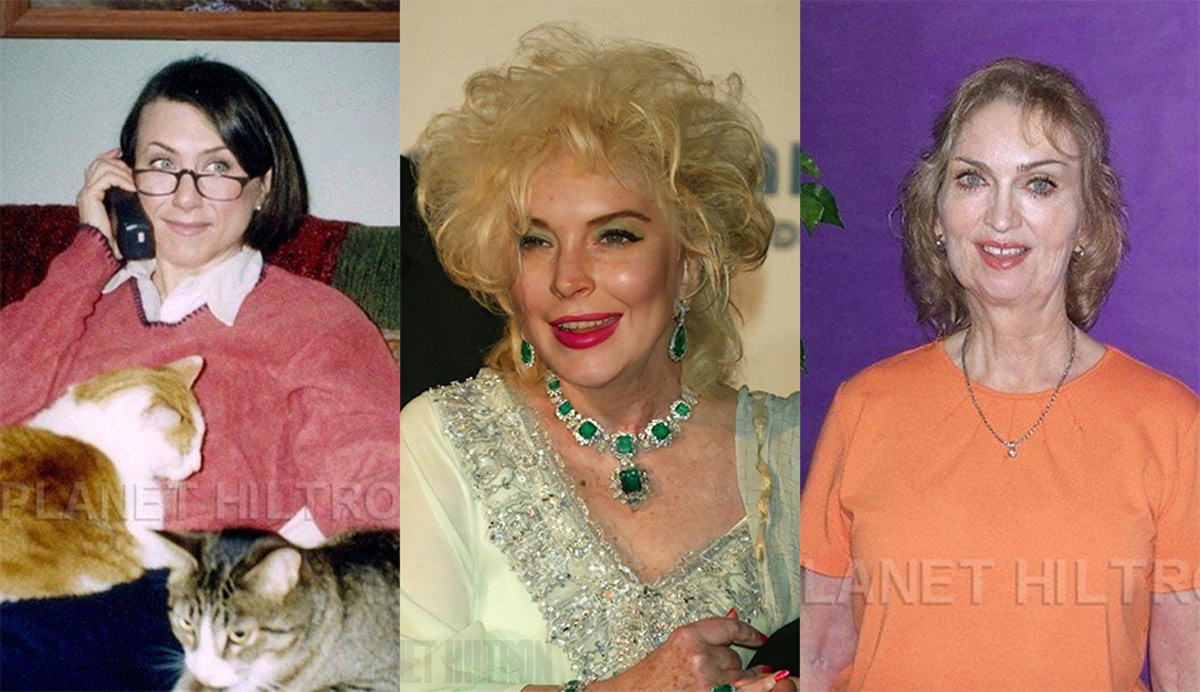 23 celebrities reimagined as ‘everyday people’ with the help of Photoshop

As much as we like to cancel them whenever they take one wrong step, celebrities—be it movie stars, pop singers or iconic socialites—have some obligations most of us don’t. One of them being that they always have to look flawless, and as you can imagine, that takes a lot of effort.

Because most of us can’t even begin to imagine what individuals like Rihanna, Beyoncé or Kim Kardashian would look like were they ‘ordinary’ people, artist Planet Hiltron did the work for us using Photoshop—and the results are absolutely hilarious! Here’s what 23 of the world’s most well-known people would look like if they were never famous:

The world’s highest-paid actress both in 2018 and 2019, Johansson has been featured multiple times on the Forbes’ Celebrity 100 list. And for good reasons! Her films have grossed over $14.3 billion worldwide, making Johansson the ninth-highest-grossing box office star of all time. But what if the actress had never landed a role in the first place? Would she rock such a terrible haircut?

Stewart and Pattinson dated for nearly four years, from 2009 to 2012, before they broke up after Stewart cheated on her Twilight co-star with Snow White and the Huntsman director Rupert Sanders.

At the time, Stewart apologised for the “momentary indiscretion” that “jeopardised the most important thing” in her life, her relationship with Pattinson. Little did she know, she would now have to apologise again for this eye-watering image.

Aniston rose to international fame for her role as Rachel Green on the TV sitcom Friends. She has since played starring roles in numerous dramas, comedies and romantic comedies. Her biggest box office successes include Bruce Almighty, Marley & Me, Horrible Bosses and We’re the Millers, each of which grossed over $200 million in worldwide box office receipts.

The actress has also been included in numerous magazines’ list of the world’s most beautiful women. But what would they have said about this alternate version of Aniston?

Oh, and what about this one?

You know what they say, a picture is worth a thousand words… Well, enough said here.

Let’s be honest, Paltrow is probably one of the only celebrities out there who seems to not have a single care about what people think of her. The Oscar-winning actress has previously entertained us with her, um, unique opinions on everything from vaginal steaming (a classic) to coining the phrase ‘conscious uncoupling’ when announcing her split with Chris Martin on her lifestyle site goop.

Britney’s one thing, Madonna on the other hand… If you search ‘Madonna’ on Google, among the search engine’s ‘People also ask’ recommendations you’ll see the question: ‘What happened to Madonna the singer?’ and we’d like to have an answer too.

Lohan is giving us Dolly Parton vibes in this image (though less perfect, duh) so we can’t think of anything mean to say really.

Sadly, Pitt and Jolie aren’t together anymore so this lovely sight is something we’ll never be able to witness.

Of course Planet Hiltron imagined Parker as a horse enthusiast. Can you see the resemblance?

Now that Lopez is officially back with Ben Affleck, we can split the beans. Did you know that the actor has a huge painting of both of them above his bed? And yes, they’re in their birthday suits.

She looks the same to us. What changed?

David and Victoria Beckham are one of Hollywood’s longest-standing couples for good reason: these two have been through the wringer together—but not as much as the two above though…

To be honest, we would look like this too if we had been married to Tom Cruise for over a decade.

After over a year of friendship—and talking on the phone constantly—Beyoncé and Jay-Z decided to test out their relationship romantically in 2001. Their first official date was at celeb-favourite restaurant Nobu and according to more lyrics from Jay-Z’s ‘Everything Is Love’, the rapper brought a friend to dinner. In the song, he called that choice his “first foolish mistake.”

Where would have the couple gone had they not been famous?

Known for primarily playing femme fatales and women of mystery on film and television, Stone became one of the most popular sex symbols of the 90s and is the recipient of various accolades. Well, well, well, how the tables have turned.

Riri would definitely still slay as an everyday person.

We’re all thinking the same thing: this is what they would look like if they had never been able to afford all the plastic surgery procedures they’ve undergone.

Oh speaking of Tom Cruise, would you look at this. That’s what we call karma.

Depp was raised in Florida. He dropped out of school when he was 15, and fronted a series of garage bands. When he married Lori Anne Allison, he took a job as a ballpoint-pen salesman to support the family. A visit to Los Angeles with his wife, however, happened to be a blessing in disguise, when he met up with actor Nicolas Cage, who advised him to turn to acting—which culminated in Depp’s film debut in the low-budget horror film, A Nightmare on Elm Street, where he played a teenager who falls prey to dream-stalking demon Freddy Krueger. Talk about luck, huh?

This image is already iconic, having circulated online for some years now. Who’s gonna tell Planet Hiltron we now need an updated version with Kim and Pete?

It’s simply impossible to picture Paris Hilton as anything but filthy rich.