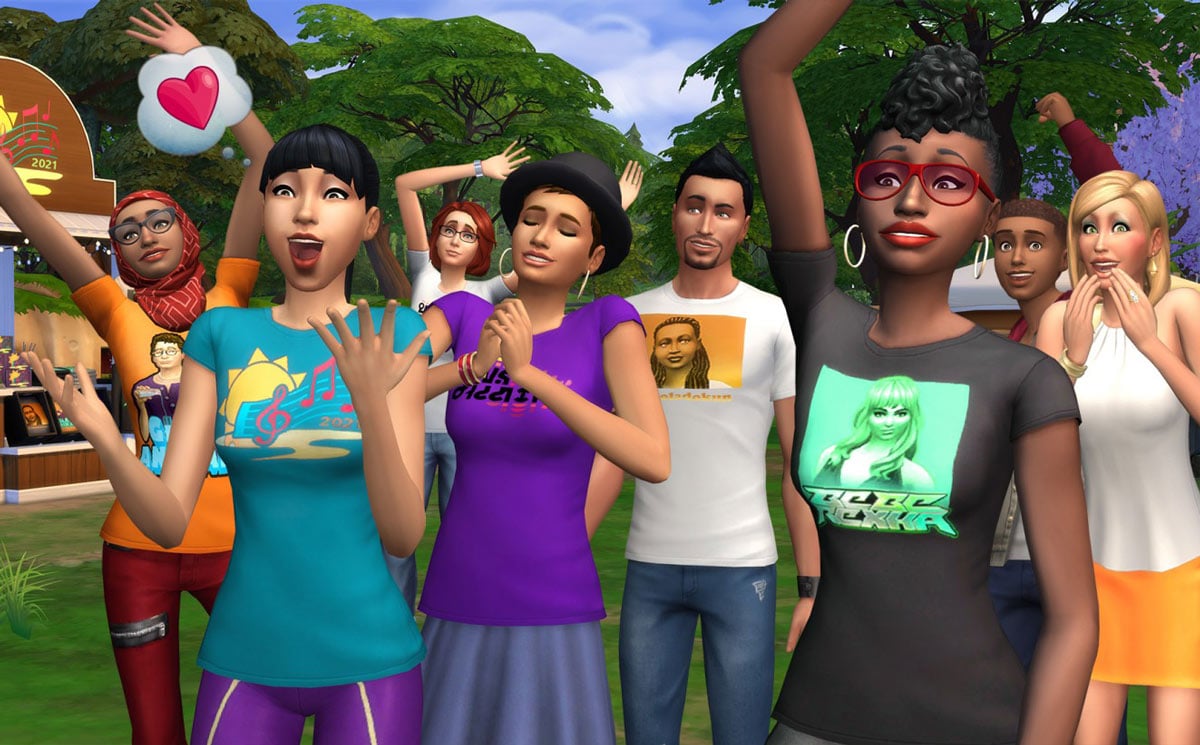 What is Simlish and why is it making a comeback among gen Z?

If you were a 90s baby and were lucky enough to have access to a decent computer by 2005, chances are you spend an unhealthy amount of time playing the life simulation video game The Sims. I know I did—me and my best friend used to lie to her mum about the amount of time we’d been playing, unaware that she could check our session’s time on their old PC.

We did it all, from leaving our Sims to die in their pool by removing the ladder and using the weirdest cheat codes (rosebud, motherlode, ;!;!;!;!;!;!) to add crazy amounts of Simoleons (§) in our household’s funds, to constantly imitating Simlish sentences we’d heard while playing. If, so far, you haven’t been able to relate to a single thing I’ve mentioned, you probably don’t know what Simlish is, and I don’t blame you—but you’ve been missing out.

The first The Sims game was originally designed by American Will Wright for personal computers and released on 4 February, 2000. At the time, because of the nature of his game, Wright knew that it needed dialogue, but thought that using real-life languages such as English would cause the conversations to be too repetitive and expensive.

Instead, he decided to go for Simlish, a ‘language’ made up of gibberish words that could not be translated, so that the dialogue’s meanings would be left open to the imagination of the player. Wright later commented that using a nonsense language turned out to be the right development choice, as people were capable of imagining it more realistically than a computer could simulate a real language.

The actual sound of Simlish was improvised by voice actors Stephen Kearin and Gerri Lawlor. As the games grew in popularity, so did Simlish. Robi Kauker, who has been The Sims’ audio director since the game’s inception, told The Verge, “He [Wright] wanted the idea of emotions to resonate with people, but he didn’t want the Sims to say anything that was meaningful so not to mess with the characters’ storytelling.”

In that sense, Simlish did a terrific job. In the early days of The Sims, Kearin and Lawlor achieved moderate celebrity. At one point, the city of Budapest extended an invitation for the two to appear in a parade, spouting Simlish from atop a float. Kearin now works as a TV and voice actor. Lawlor continued acting, and was an activist for San Francisco’s homeless population, up until her death in January 2019.

As the games depicted a more perfect approximation of human society, and the Sims’ expressive possibilities began to multiply, Simlish expanded to underscore new and specific emotions to mirror the complexity of the gameplay. The activity “Anna cooks” evolved into “Anna cooks happily” or “Anna cooks triumphantly.”

Certain nouns in the universe are now identified. ‘Nooboo’, for example, translates to the English ‘baby’, and can be used as a term of endearment, or to reference an infant or a crib. ‘Fliblia’ refers to fire. The now-iconic ‘sul-sul’ is akin to ‘ciao’, appropriate as a greeting or a farewell.

What is Simlish based on and can you learn the language?

During the early stages of sound recording and development, the plan was to base Simlish on real languages. One of the first languages considered was the Philippines’ Tagalog. However, after further experimentations with other languages including Estonian, Ukrainian, and the Navajo code used in World War II, Wright opted to develop an entirely new language instead. One in which words or phrases have no actual meaning.

After trying an improv game called “Foreign Poet,” where the actor retells a poem in impassioned gibberish and the listener is asked to interpret it, Kearin began speaking in an unintelligible, gummy version of English. The team loved it, and asked him if Lawlor could record as a female counterpart.

Both served as the Simlish actors for the first several iterations of the game, spanning about up until 2006. “The two would remain in the booth for unbroken hours in chains of unbroken days, speaking gibberish to one another, playing off what the other just said by extending a syllable to see what happened, or switching out a melancholy ‘vitash’ for a livelier one,” wrote The Verge.

Having no attachment to actual words and languages, the gibberish that eventually became Simlish is nearly impossible to learn, no matter how hard some fans try. Being born out of complete improvisation, it lacks the structure that is necessary for language-learning and communication. “Unlike other constructed fictional languages like Star Trek’s Klingon and Game of Thrones’ Dothraki, Simlish does not have defined parts of speech,” an article published in VICE further highlights.

Yet, it hasn’t stopped players from congregating online to try and piece together what they understand about the made-up language. Some have even created fonts based on the written form of Simlish featured in the games, and started blogs dedicated to the language.

Most players are already able to recognise some words and phrases, while more dedicated ones can figure out how their character is feeling just by hearing them say a certain word. You can find an introductory list to Simlish terms that are widely known here. You can also try your hand at learning Simlish using this WikiHow guide. Good luck!

Why is Simlish still a thing online?

Although it hurts to say this, it’s clear that The Sims games are not as popular as they used to be—it’s fair enough when they have to compete with new technologies such as VR games. Yet, gen Zers have been exposed to the games’ archetypical gibberish thanks to the generation’s go-to app, TikTok.

Posted on 26 June, singer Bebe Rexha posted a video where she announced that her song ‘Sabotage’ had been granted a Simlish remix for TikTok’s new #SimlishSessions challenge. In the video, the singer asked people to sing along with her.

The new song is part of a catalogue that has been created for the EA Games’ in-house concert. Various music artists such as the singer of Glass Animals, Dave Bayley, and Joy Oladokun have performed. The Sims has a long history of collaborating with artists, over 500 in fact, from Katy Perry’s ‘Last Friday Night’ to ‘Don’t Cha’ by the Pussycat Dolls.

Since the game’s new strategy first got rolled out on the video-sharing app, TikTokers have been jumping on the trend. With over 11 billion views on its hashtag, it’s safe to say that gen Zers appreciate Simlish just as much as their ancestors.