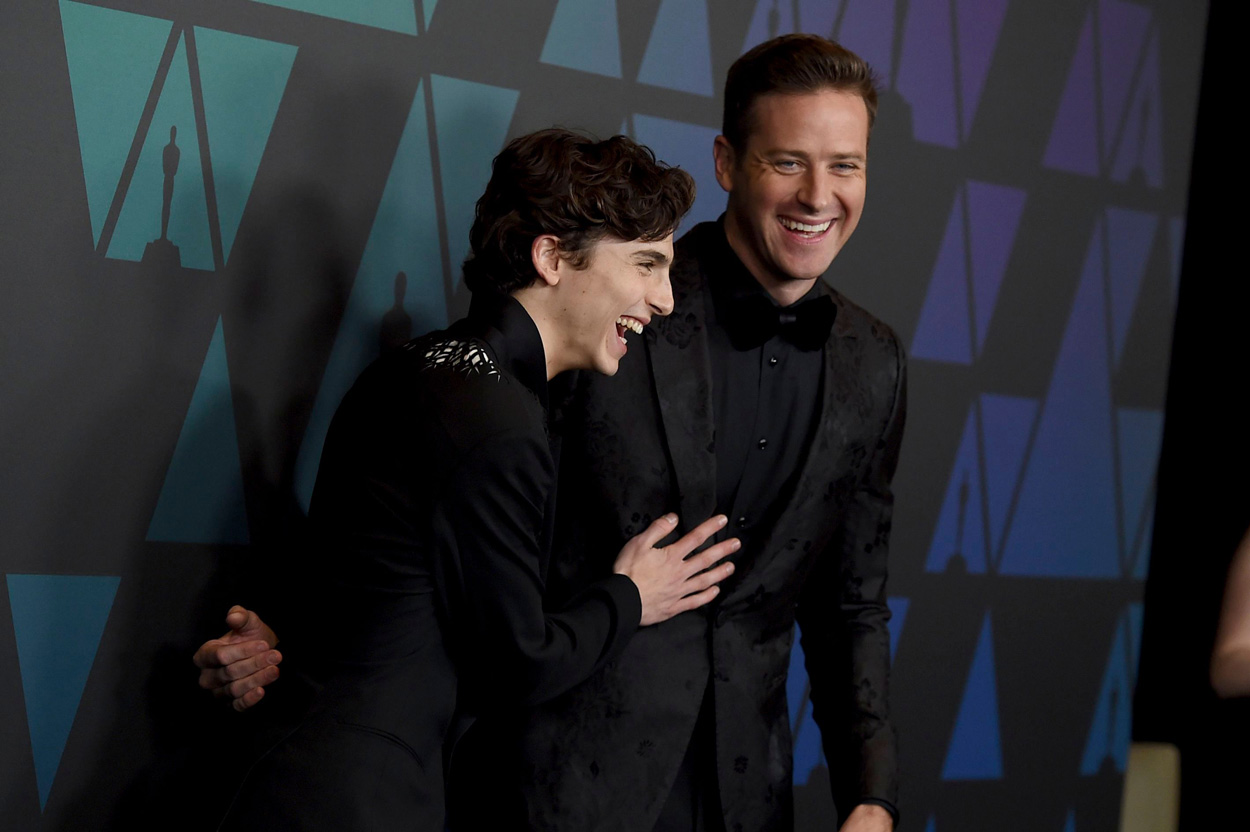 If you haven’t checked Twitter recently, you may not have seen some semi-cryptic tweets from everyone’s favourite heart-throb Timothée Chalamet. He sent out four consecutive tweets that read, “soft bones,” “crunchy bones,” and “bony bones”—only to then sum them all up perfectly with “boner bone.” Understandably, everyone on the internet immediately began to worry that Chalamet’s recent portrayal of Willy Wonka had made him go slightly loopy.

We were all relieved to find out that he was simply promoting his new teenage-cannibalism film, Bones and All. With this new movie coming out—and considering recent fresh-eating thriller, Fresh—we thought it was the perfect opportunity to take a deeper look into one of Hollywood’s real life alleged cannibals: Chalamet’s previous co-star, Armie Hammer.

Whether you first came across the actor in Call me by your name—Luca Guadagnino’s acclaimed 2017 love story which saw Chalamet finger a peach—or you caught a glimpse of him brooding with Gal Gadot in Death on the Nile, Hammer has definitely made his mark in the city of angels. Although, with the extensive accusations against the actor in relation to sexual assault, emotional abuse and possible cannibalism, we’re not sure this was what he had in mind.

Keep scrolling for a one-stop-shop review of all the juiciest (pun intended) details dug up on the American actor nicknamed “Baking Soda Boy” with no direct connection between his moniker and sodium bicarbonate.

What are the allegations against Armie Hammer?

At the beginning of 2021, Hammer’s life started to spiral. After just announcing publicly that he and his wife were officially separating, a number of women—having been romantically linked to him in the past—began posting screenshots of private conversations with the actor. The messages were incredibly explicit and painted an image of a man obsessed with domination and aggression, specifically towards women.

As reported by Variety at the time, the woman who first made these allegations on social media, @houseofeffie on Instagram, explained how she had personally been in a turbulent relationship with Hammer and was subject to extreme physical and emotional abuse. She spoke of how “he would often test my devotion to him… I thought that he was going to kill me.”

Once these initial allegations had been made, the floodgates opened. One particular ex-girlfriend, Courtney Vucekovich, told Page Six that Hammer had wanted to “break my rib and barbeque and eat it.” She also went on to describe the intense nature of their relationship, explaining how the actor groomed her into accepting and expecting darker and more abusive treatment—that included putting her in dangerous circumstances and obsessing over every move made by Vucekovich.

We have seen time and again that when women come forward to tell their stories of abuse, specifically against high-ranking men, they are more often than not silenced by both the media and the industry. In the case of Jared Leto, a number of victims have spoken up about the singer and actor’s problematic and predatory behaviour. However, they were met with zero support and instead fought with the very real fear that their honesty would result in dangerous repercussions from Leto or his team of relentless publicists and lawyers.

In this particular case, however, people listened. Hammer was immediately dropped from his upcoming rom-com with Jennifer Lopez and exiled from Hollywood—thereby forcing him to make his escape to his childhood home in the Cayman Islands. Perhaps the shocking nature of the accusations finally forced the movie industry to take action. But given the fact that the establishment continues to protect other big male names in the industry, it’s hardly time to cue the celebrations.

I would argue that the Lone Ranger was unsuccessful in defending his name due to a number of pre-existing concerns surrounding his behaviour. According to Vanity Fair, close friends and family insist that “if Armie is guilty of anything… it’s having a penchant for super-kinky sex.” However, the actor’s private Instagram, @el_destructo_8, which has since been deleted, has been incredibly enlightening.

One of his posts featured a tied-up mannequin with the caption: “If quarantine doesn’t start moving more quickly I’m going to fuck this thing.” Who knew that when he bagged himself a cameo in Gossip Girl back in 2012, he’d take inspiration from all the fictional misogyny and apply it in his real life?

Kinky sex and abuse are not the same

Mistaking Hammer’s extreme violence and abusive nature for kink play is both wrong and incredibly dangerous.

Like all disgraced bad boys of the world, Hammer escaped to the Cayman Islands. Although his choice of location isn’t too suspicious, we’re sure the lack of WiFi and police presence were just a bonus. The Guardian reported that he supposedly was last seen leaving his ‘day job’ selling timeshares to take refuge in an Los Angeles crib owned by Robert Downey Jr. What he’ll do next, we’re not sure, but we doubt it will include jail time.

His ex-wife, Elizabeth Chambers, has been publicly supportive of all those who have spoken out against her former partner. In an Instagram post, Chambers wrote: “I didn’t realise how much I didn’t know. I support any victim of assault or abuse and urge anyone who has experienced this pain to seek the help she or he needs to heal.”

If you still haven’t had your fill of Hammer content, don’t worry. A new docuseries, House of Hammer, is set to be released on Discovery Plus on Friday 2 September 2022. The show will feature exclusive interviews with two of the actor’s previous partners as well as his aunt Casey Hammer—making it an absolute must-see. With so many of Hammer’s extended circle closing in on him, it’s likely that his time in the spotlight is well and truly over.