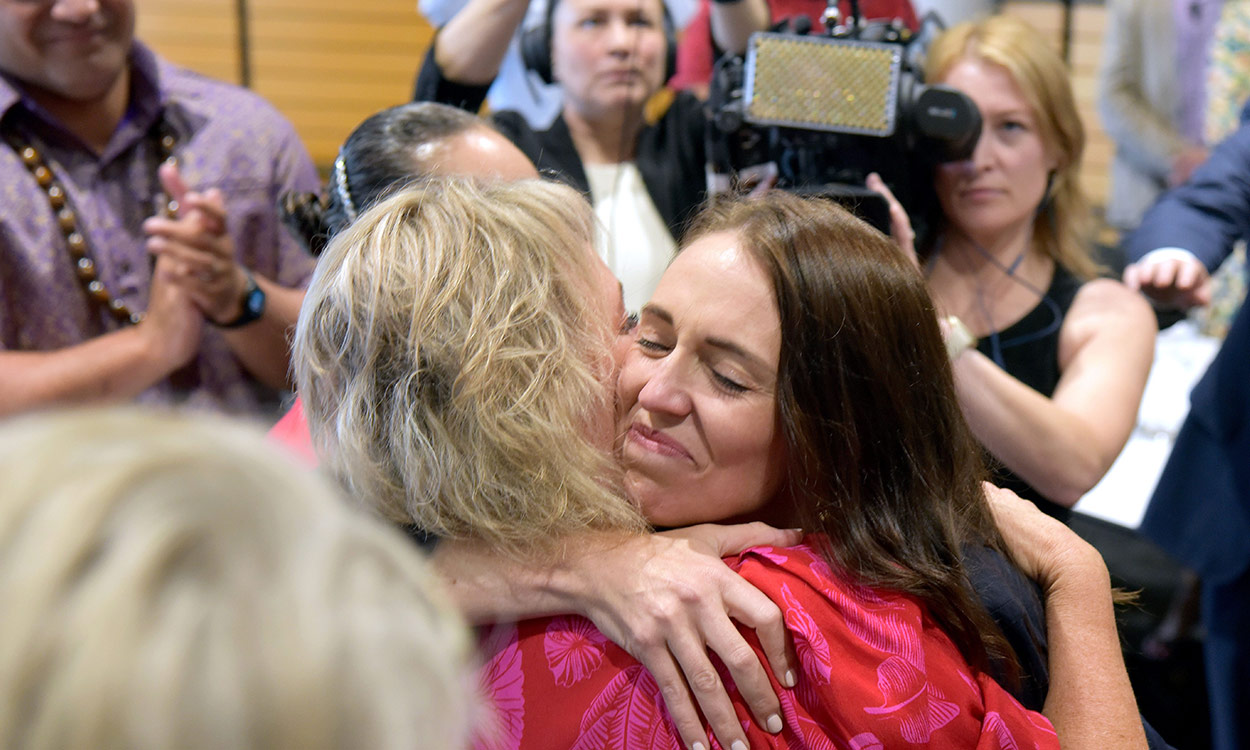 On Thursday 19 January 2023, New Zealand’s Prime Minister (PM) Jacinda Ardern revealed the news that she will be officially stepping down as the country’s head of state within the next few weeks. Choking back tears during a press conference, the politician said her term would end by 7 February, when she expects a new Labour Prime Minister will be sworn in—though she added that “depending on the process, that could be earlier.” A general election has been called for 14 October.

Ardern was elected in 2017, and despite support for her and her party falling considerably since the country’s last election in 2020, she remained New Zealand’s preferred Prime Minister in the polls.

Despite this public mandate, the PM felt the time had come to move on from the premiership. “The decision was my own,” Ardern explained at the news conference. “Leading a country is the most privileged job anyone could ever have, but also the most challenging. You cannot and should not do the job unless you have a full tank, plus a bit in reserve for those unplanned and unexpected challenges.”

As New Zealand prepares for its upcoming election and inevitable change in leader, and the rest of the world watches, we thought it’s only fair we take a moment to reminisce on Ardern’s most badass moments as PM.

1. She changed New Zealand gun laws for the better

Although gun violence is considerably lower in New Zealand than in other countries such as the US and Australia, on 15 March 2019, the country saw the deadliest shootings in its history. The two consecutive mass shootings occurred in a terrorist attack on two mosques in Christchurch—the Al Noor mosque and the Linwood mosque—and resulted in 51 deaths and a further 40 people being injured.

At the time, Ardern was first widely acclaimed for the way in which she embraced the attacks’ survivors and New Zealand’s Muslim community. But the leader was not planning on stopping there—just seven days after the massacre, she announced a ban on the sale of all types of semi-automatic weapons and assault rifles in the country. Now, that’s how it’s done.

Up until that point, the minimum age at which people could own a gun in New Zealand was 16, or 18 for military-style semi-automatic weapons. Anyone over those ages who was considered by police to be “fit and proper” could own one.

Though all gun owners had to have a licence, most individual weapons did not have to be registered—once a licence had been approved and issued, gun owners could pretty much buy as many as they wished.

Previous attempts to tighten gun laws in the country had failed due to opposition from pro-gun organisations and the popularity of hunting in New Zealand. And yet, as the nation marked six months since the attacks, the Prime Minister introduced a new bill aiming to further tighten gun laws.

The politician’s efforts on gun control were widely acclaimed, especially in the US, where pro-gun control activists and lawmakers have struggled to address the issue despite countless mass shootings ravaging the country.

2. She made history as the youngest female head of government

On 26 October 2017, Ardern became New Zealand’s Prime Minister, making her the country’s youngest leader in over 150 years and the youngest female head of government at age 37.

3. She also made history as a mother

Not long after being elected, on 21 June 2018, Ardern gave birth to her daughter, making her the world’s second elected head of government to give birth while in office (after Benazir Bhutto)—and setting a new standard for female politicians worldwide.

4. She spearheaded one of the world’s strongest COVID-19 strategies

New Zealand’s COVID-19 response—from its initial elimination strategy to its transition into a mitigation strategy—has been described as highly successful by countless experts. Although the PM’s approach was also heavily criticised for its strictness, it got the country through the first 18 months of the pandemic until vaccines started becoming widely available and resulted in very low COVID mortality rates.

In December 2022, Ardern joined forces with the Prime Minister of Finland, Sana Marin, for a press conference. Covering what happened next for SCREENSHOT, Charlie Sawyer wrote: “During questioning from a number of news outlets, a journalist casually stated: ‘A lot of people will be wondering, are you two meeting just because you’re similar in age and got a lot of common stuff there?’ Almost instinctively, Ardern interrupted him mid-sentence and pondered: ‘I wonder whether or not anyone ever asked Barack Obama and John Key if they met because they were of similar age’.”

During her recent announcement, Ardern concluded by saying: “As to my time in the job, I hope I leave New Zealanders with a belief that you can be kind, but strong, empathetic but decisive, optimistic but focused. And that you can be your own kind of leader—one who knows when it’s time to go.” Iconic. You’ll be sorely missed, Jacinda.

As of now, it is unclear who will take over as Prime Minister until October’s election, particularly as deputy PM Grant Robertson has already announced that he will not be entering the leadership contest.

In what appears to be a disappointing and never-ending cycle, female world leaders are still having to shut down misogynistic and sexist questions during public appearances. The Prime Minister of New Zealand, Jacinda Ardern, and the Prime Minister of Finland, Sana Marin, recently joined forces for a press conference—as political leaders often do. What happened next is a situation we see occur far too often when it comes to women.

During questioning from a number of news outlets, a journalist casually stated: “A lot of people will be wondering, are you two meeting just because you’re similar in age and got a lot of common stuff there?” Almost instinctively, Ardern interrupted him mid sentence and pondered: “I wonder whether or not anyone ever asked Barack Obama and John Key if they met because they were of similar age.”

According to the BBC, the male journalist was from New Zealand radio network Newstalk ZB. Ardern continued, stating: “We, of course, have a higher proportion of men in politics, it’s reality. Because two women meet, it is not simply because of their gender. Our meeting today is a chance… [to] really leverage the economic opportunities between our two countries. It’s our job to further it, regardless of our gender.”

The clip—which captures the moment in question—has since gone viral online, with a number of netizens emphasising the blatant sexism that still exists within international politics. Rather than posing a question about the political relationship between New Zealand and Finland—which would have been more poignant considering this was the first time a Finnish world leader had visited the country—this journalist decided to concentrate on diminishing the political stature of Ardern and Marin by insinuating that their reasons for meeting may share a similar hair care routine.

This is also, of course, not the first time either of these politicians have had to counter sexist remarks while carrying out their public duties. In August 2022, Marin faced a slew of criticism after videos surfaced of her dancing with her friends. The world leader was ultimately pressured into taking a drug test in order to prove the innocence of the event.

The New Zealand Prime Minister has also proved time and again that she will not stand for any gender-based criticism some may try to throw her way. In 2018, Ardern remained as calm as ever during an Australian 60 Minutes interview, wherein she endured an incredibly inappropriate line of questioning. At one point, reporter Charles Wooley told Ardern he was “smitten” with her and then proceeded to ask her when her baby was conceived. Poised as always, the Prime Minister simply rolled her eyes and continued with the conversation.

While these political leaders are more than capable of defending themselves and acting composed in public, the fact of the matter is that they shouldn’t have to condone such behaviour in the first place.