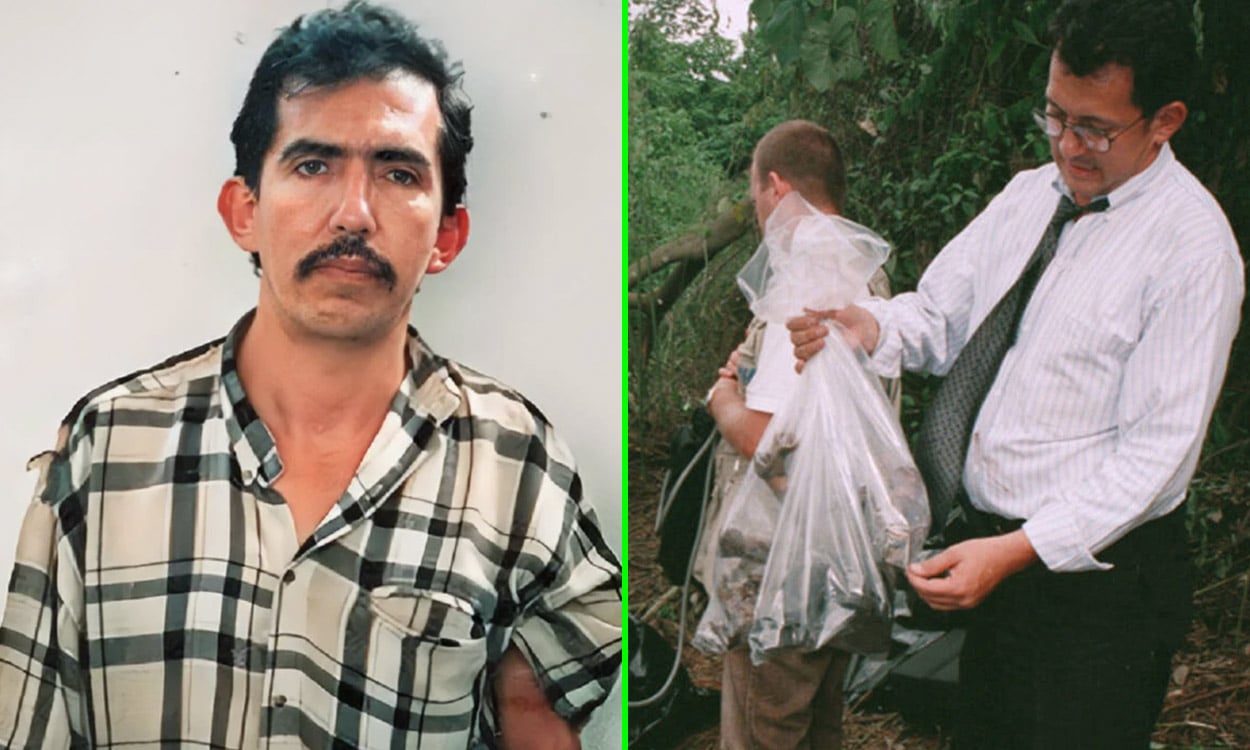 ‘The Beast’: serial killer with the highest known victim count to become eligible for parole in 2023

From October 1992 to April 1999, Luis Garavito preyed upon and brutalised what is thought to be as many as 400 children and teenagers across Colombia, Ecuador and Venezuela—and he’ll be up for parole pretty soon.

After officially confessing to the murders of 138 minors—predominately young men and boys—in October 1999, the torture-killer, necrophile and rapist infamously known as ‘La Bestia’ (which translates to ‘The Beast’) was originally sentenced to 1,853 years in prison. This was later reduced to 22 years after he struck a deal and led police to many of the bodies of his victims.

With the spine-chilling maniac scheduled to become eligible for parole in 2023, now more than ever is the time for you to familiarise yourself with Garavito’s crimes before he inevitably starts making headlines again.

Before turning into an abuser himself, The Beast suffered a violent childhood. Born on 25 January 1957, in Génova, Quindío, Colombia, Garavito was the oldest of seven siblings, all of whom he claimed were physically and emotionally abused by their father, Manuel Antonio Garavito.

He further went on to describe his mother, Rosa Delia, as a violent woman who showed him little affection and care as a child. When Garavito was only six or seven, he recalled being strapped to a tree and beaten with a tree branch by his father as he attempted to defend his mother, whom Manuel was known to beat even in pregnancy. Sleeping in the same bed as his father, Garavito also alleged that he had been fondled on one occasion.

In 1969, when Garavito must have been around 11, he was subject to brutal physical and sexual abuse by a local drug-store owner and neighbour—who had been close friend of his father’s. The man had allegedly bound Garavito to a bed before proceeding to burn him with a candle, cut him with a razor blade and bite him violently during these incidents of molestation.

Aged 16, Garavito left home to hold a number of odd jobs throughout the country. He worked as a store clerk and even sold prayer cards and religious icons on the street for a time. It was also around this period that he reportedly developed an alcohol addiction and became known for his temper. Police reports stated that he had once tried to kill himself and consequently had to spend five years in psychiatric care.

It’s also important to look at the political and social landscape Garavito grew up in—a decades-long civil war that had begun in the late 1960s and left thousands of citizens homeless, fending for themselves on the streets. Many of those individuals were children, whose parents were either dead or long gone, meaning that no one would notice or care if they went missing.

As you can imagine, Garavito utilised this brutal reality to his advantage when committing his endless list of crimes, especially in 1992 when he carried out his first murder.

Like other known serial killers such as American cannibal Jeffrey Dahmer, Garavito’s psychological trauma led him to kill and dissect animals as a teenager. During his teenage years, he would also begin to suggest to his younger brothers and sisters that they sleep with him naked in the same bed they shared. This led him to begin sexually fondling his younger siblings—which was evidently overlooked by their parents—as they slept, often stripping them naked on the family farm.

The physical trauma endured by the young man had allegedly proven so severe that Garavito would not be able to properly ejaculate and he would soon sustain an erectile dysfunction problem that would follow him into adulthood.

Plagued with symptoms of psychosis, paranoia and depression as a result of the extreme abuses he had faced as a child and adolescent, during the majority of the 1970s and the 1980s, Garavito would begin to sexually molest children of both sexes as he spiralled into mental illness. His attraction would gradually turn paederast, however—sexual relationships between an adult man and a pubescent boy.

Discovering Adolf Hitler’s book Mein Kampf, Garavito also became fond of the late dictator. This fondness would eventually turn into idolisation, with The Beast stating that he “liked the concentration camps.” Having molested and tortured more than 100 children by the mid-80s, wherever Garavito had resided during this time, reports of child molestation in said areas increased dramatically.

The psychotic and sadistic murders of The Beast

Though Garavito attempted to commit his first murder on 1 October 1992 after he allegedly entered a state of psychosis in which the devil had asked whether he would like to serve him through the use of a ouija board, it was only three days later that The Beast succeeded, with his first victim being a 13-year-old boy named Juan Carlos.

Meticulously careful about his crimes, Garavito specifically targeted homeless and orphaned boys who roamed the streets looking for food or shelter. Once he chose his victim, he would approach and lure them away from the crowded city streets by promising them gifts, candy, money or employment.

And he would dress the part as well, impersonating a priest, a farmer, an elderly man, a street vendor and many more, rotating his disguises in order to avoid suspicion. Once he’d lured the poor child away, he would walk with him for a time, encouraging the boy to share about his life in order to earn his trust. In reality, The Beast was wearing the boys down, walking just long enough that they would eventually get tired, making them vulnerable and allowing the serial killer to attack.

It is also said that Garavito collected his victims’ amputated toes, which he was forced to discard for fear of being traced by bloodhounds. It wouldn’t be until five years after La Bestia had murdered his first victim that police began to take notice of the missing children.

In late 1997, a mass grave of around 25 corpses was accidentally discovered in Pereira, prompting police to launch an investigation. The scene was so macabre that they initially suspected a satanic cult was behind it.

Then in February of 1998, the bodies of two naked children were found in Pereira, lying next to each other. A few feet away, another corpse was found. All three had their hands bound and their throats slashed. The murder weapon was also found nearby.

While searching the area around the three boys, police came across a note with an address handwritten on it, which turned out to be Garavito’s girlfriend, Graciela Zabaleta, whom he had been dating for years. Though Zabaleta explained that she hadn’t seen him in months, she gave the police access to everything he had left behind.

This allowed the authorities to determine that the serial killer was middle-aged and had astigmatism in his left eye. His shoes also showed that he walked with a limp and stood between 163 and 167 centimetres tall. In one of Garavito’s bags, local authorities also discovered pictures of young boys, detailed journal entries in which he described each of his crimes, and tally marks of his victims.

A search for The Beast continued for days, but unfortunately, none of the efforts turned up any information on Garavito’s whereabouts—that is, up until 22 April 1998.

About a week after the hunt for Garavito had begun, police in a neighbouring town picked up a man on suspicion of rape after someone sitting in an alleyway had noticed a young boy being followed and eventually accosted by an older man. Finding the situation worrying enough to intervene, the man rescued the boy and alerted authorities.

Police found Garavito walking out of the woods in the evening, who gave them a false ID and claimed to be a local politician. Despite this, they arrested him on suspicion of attempted rape and locked him up. Unbeknown to them, they had in their custody one of the world’s deadliest serial killers.

Garavito confessed to murdering about 140 children and was charged with killing 172 altogether throughout Colombia. He was found guilty on 138 of the 172 accounts—the others are still ongoing. As a result, The Beast initially received the lengthiest sentence in Colombian history.

Where is Luis Garavito today?

Garavito is currently serving his sentence in a maximum-security prison in Valledupar in the department of El Cesar, Colombia. Living separately from the other prisoners for his own protection, he only takes food and drinks given to him by those he knows. His guards describe him as relaxed, positive and respectful. He’s even studying to be a politician, and upon his release, hopes to start a career in activism, helping abused children—no joke.

In 2021, he made a very public plea for his release, claiming that he has been a model inmate and is living in fear of being killed by other inmates. However, a judge denied the request because Garavito had not paid a fine for his victims which roughly totalled $41,500.

As of now, La Bestia remains behind bars, but not for long it seems.